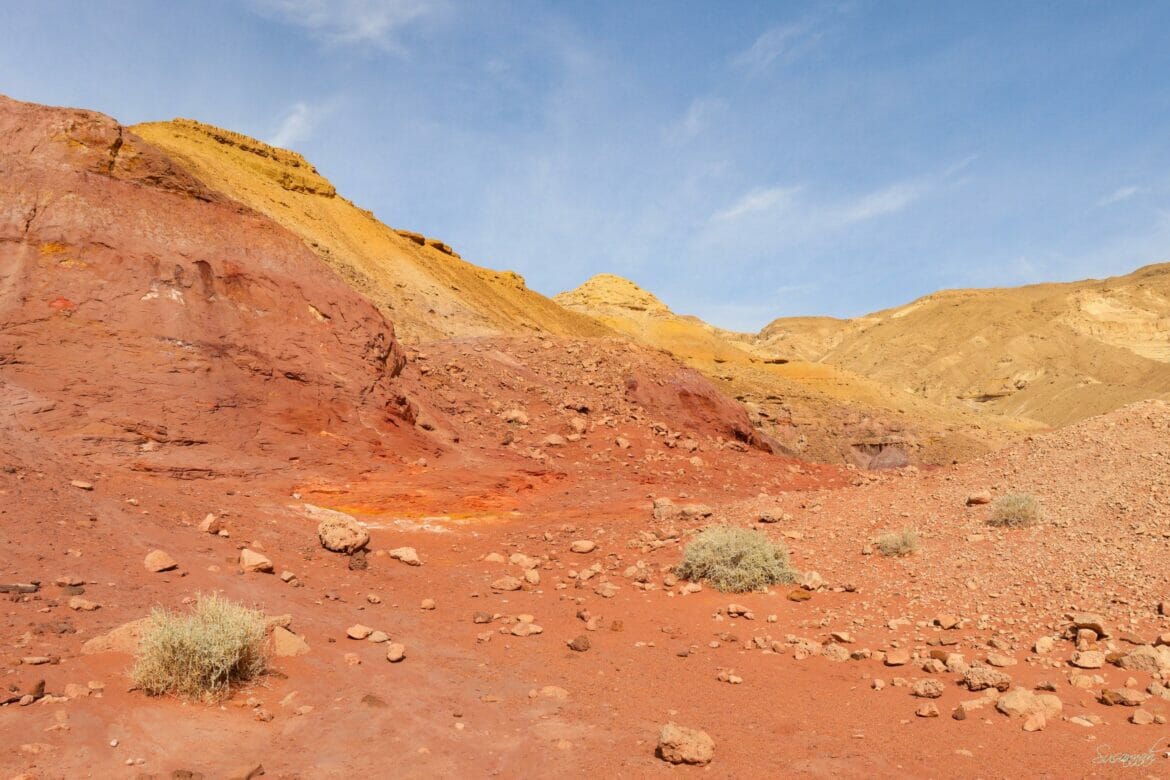 Welcome to Part Three of our hiking basics series!  In Parts One and Two, I reviewed the parks and the seasons in Israel.  In Part Three, I’ll be explaining the different regions of the country and type of hiking terrain you can expect to find in each one.

Israel is a tiny country that varies widely from one place to the next.  In our country, there are deserts, mountain ranges, coastal stretches, and forests.  During the wintertime, an adventurous hiker could climb to the top of a snowcapped mountain one day, and take a long, hot desert hike on the next.  In the summertime, some parts of the country (the Dead Sea area, for example) are simply not suitable for hiking.  Learning a bit about Israel’s topography and geography will help you better plan your excursions in Israel.

Let’s get down to the basics:

Northern Israel – it’s everybody’s favorite place to vacation in the summertime.  And with good reason: Northern Israel is full of rolling hills and glorious mountains. There are waterfalls, springs, and the beautiful Sea of Galilee to cool off in.  It’s one of the most pleasant parts of Israel during the long, dry summer season.

Northern Israel can be separated into two distinct regions: the Golan Heights and the Galilee.

The Golan Heights lies East of the Sea of Galilee and stretches up to Mount Hermon at the uppermost tip of Israel.  This part of the country is home to the most popular national parks and nature reserves.  In the Golan, rivers and streams run North to South.  Their sources are in the snowmelt of the Hermon Mountain and ultimately, they spill into the Sea of Galilee.  This plentiful water flow results in falls (Banias), pools (Meshushim), and streams (Lower Nahal Hermon).

The Western half of Northern Israel is called the Galilee.  The Upper Galilee (which includes “Etzba HaGalil”, the finger of the Galilee) is an area quite similar in makeup to the Golan Heights.  There are streams, waterfalls, and mountains in this region.  The Upper Galilee stretches from Metulla in the North to Safed in the South.  Popular hiking trails include Nahal Amud, Nahal Kziv, and Montfort.

Haifa and the Carmel Mountains

The Carmel region is just west of the Galilee.  This is one of my favorite parts of Israel.  The Carmel Mountains are green year-round.  Plentiful shade and mountain peaks make a welcome escape from the heat on hot days.

The most unique feature of the Haifa and Carmel Mountain region is the juxtaposition of rolling mountain peaks against the Mediterranean Sea.  Many of the hikes in this region feature interesting terrain and sea views (Dor HaBonim Beach Trail, for example).

Since it’s not too far from Central Israel and Jerusalem, the Haifa and Carmel Mountain Region is a good place for a convenient escape into nature at any time of year.

Central Israel has got a lot to offer.  This region is home to big, beautiful buildings, museums and cultural events, and fantastic beaches.  There are cities like Tel Aviv, Herzliya, and Netanya in Central Israel.  But as far as hiking trails go, there isn’t very much to see in this part of the country.

The terrain in Central Israel is mostly flat.  In the summertime, temperatures rise, making hiking uncomfortable.  There aren’t many forests and trees to provide protection from the sun.  So, this part of the country is more suitable for wintertime hiking.

Some nice trails in Central Israel include river to beach hikes (like Sorek Estuary at Palmahim and Nahal Alexander) and coastal trails (like Hof HaSharon).  There are also a few parks and forests between Tel Aviv and Modiin (Ben Shemen Forest, for example) which make great hiking spots.

In the wintertime, Central Israel is a good place to take an easy hike in the sunshine.  But don’t expect any epic hiking adventures in this part of the country.

People don’t necessarily think of hiking when they think of Jerusalem.  But contrary to popular knowledge, the area around the Holy City is home to the most complete network of hiking trails in the country.

The nice thing about the trails in the Jerusalem Mountains is that there are so many of them.  You could walk for days from one trail to the next, exploring the different parts of the Jerusalem countryside.  Since it’s mountainous, this part of the country is typically a few degrees cooler than other places, making it a nice choice for year-round hiking.

The Jerusalem Lowlands is the name for the area closer to Beit Shemesh.  This sub-region tends to be flatter and warmer.

The Jerusalem Lowlands are a good choice for the wintertime when hills and valleys fill up with colorful wildflowers. Interesting caves and historical sites can be found along the various hiking trails.  As opposed to Central Israel, there are several vast nature reserves in the Jerusalem Lowlands, making this area a perfect choice for a long, quiet hike.

For the purposes of this Hiking Basics article, let’s divide Southern Israel into three categories: the Dead Sea Area, the Negev, and the Judean Desert.

The Dead Sea is probably the most quintessentially Israel body of water in the country.  Lifeless and flat, it’s water’s healing properties and reflective beauty are the reason that tourists flock to the place.  But we hikers love the Dead Sea for another reason: there are tons of incredible hiking trails there.

Think Ein Gedi and Nahal Darja.  The area around the Dead Sea is full of awesome canyon hikes. These canyons are dry streambeds, which fill up and flow into the Dead Sea during periods of heavy rain.

There are wet oasis hikes (like Nahal David, Nahal Arugot, and Nahal Bokek), and dry adventure trails (Nahal Darja, Nahal Mishmar).  Many of the hikes in the Dead Sea area involve climbing ladders and hand holds.

Since it’s the lowest place on earth, it can be extremely hot at the Dead Sea, making this a perfect hiking area for the winter season.  But if you do find yourself at the Dead Sea in the summertime, you can head to one of the many water hikes in the area to stay cool.

The Negev Desert covers the entire lower third of Israel.  When most people think of a desert, they may think of boring and lifeless terrain.  But nothing could be further from the truth.

In the Negev, awesome geological formations rule the trails (there are three large craters in the Negev, including Maktesh Ramon).  Since desert areas are largely uninhabited by humans, wild animal spotting along the trail is likely.  You’ll meet ibex, birds, large reptiles, and cute little mammals along many Negev hiking paths.

The Negev desert consists of varied and interesting terrain.  In the South, the mountains around Eilat are jagged, red rocked, and dramatic.  In the Northern Negev, the terrain looks quite different, with tawny colored peaks and canyons set against the open sky.

The Negev is the best place in Israel to go on a real adventure.  You can walk for days through the desert on marked trails without encountering any towns, cities, or urban life whatsoever.  This is probably the only place in Israel where you can completely escape into nature.

This isn’t completely accurate, but let’s say for simplicity’s sake that the Judean Desert covers the area at the north of Southern Israel, not including the Dead Sea.    Some of that actually is the Judean Desert.  And some if it is an area known as the Shfela, or Plains.

In the summertime, this region is hot and dry, and unsuitable for hiking.  Desert pools throughout the area dry up by late spring.

The Judea and Samaria region is not so much of a topographically defined region as a disputed piece of geographical territory.  That is to say that the topography varies dramatically throughout the region.

In the south (Judea), the land tends to be mountainous and cool, even in the summertime.  Gush Etzion (in Judea) is one of the few places in Israel where snow falls in the wintertime.  You can see some fall foliage in this region.  Since the area includes important Biblical cities (Bethlehem, Hebron) many of trails feature important antiquities.  There are trails over ancient roads and past Second Temple ritual baths.  There are castles (Herodion), caves (Haritoun Cave in Tekoa), and spring pools.

Samaria also includes many places of Biblical significance (Shiloh, for example).  This region is lower than Judea and features more rolling hills than mountain peaks.  Hiking trails in Samaria are perfect for the winter months, when rain makes the usually dry dunes come to life.

No matter what time of year you hike in Judea and Samaria, safety should always be your top priority in this part of the country.  Never hike in Judea or Samaria without a group.  Always take precautions for your personal safety before hiking here.

Israel is a varied landscape, making it an ideal destination for year-round hiking.  No matter when you’re planning to hike in Israel, you can find a part of the country that’s well suited to the season.

I hope this guide has helped you better understand the different parts of Israel.  Stay tuned for the next part of our Hiking Basics series where I’ll take a deep dive into an often-mystifying topic: streams, springs, and other water sources in Israel.