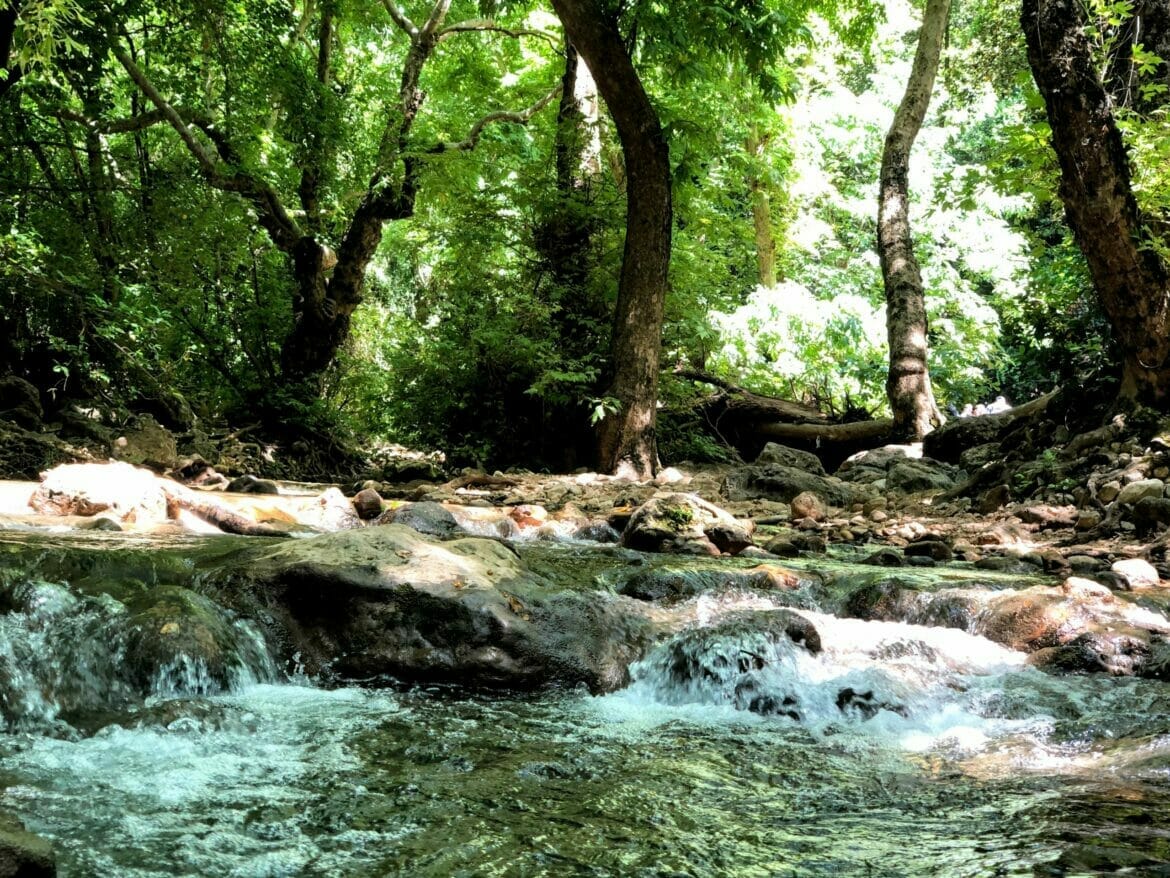 A few weeks ago we had a chance to hit a trail that we’d been wanting to hike for a long time.  The Montfort/ Nahal Kziv loop in the Galilee takes hikers to one of the coolest viewpoints in Israel on top of an ancient Crusader Castle.

But that’s not all.  It also leads down into the Kziv stream, where you can walk in and out of the river along the green trail.  This path twists and winds its way under a thick canopy of trees in a valley – which makes this long and lazy trail perfect for a summer day.

When we hiked the Montfort/ Nahal Kziv trail, we had the whole day to wander.  So, we took our time to explore every part of path.  We got to see just about everything – from a crumbling fortress, to waterfalls, to a secret cave.

This hike was one of the best long hikes we’ve been on in Israel.  Here’s what we saw along the way:

Begin with a Bang

The trail starts off near the little town of Mitzpe Hila.  The trailhead is quiet and unassuming.  There’s no evidence of the incredible world of wonder that lays beneath.

But once we started on the red trail, it was only a short walk until we were impressed with natural beauty all around.  The path led us to viewpoints out to the surrounding mountains – which were completely covered in lush greenery, a forest on a mountainside.

It’s not a view that’s easy to come by in this country, and we especially appreciated it in late spring, when most of Israel’s landscape had already turned to a shade of pale gold.

Through the Cave and Towards the Fortress

We continued to follow the red trail towards a cave tunnel.  As we walked through, we noticed the richly colored rock formations in shades of red and yellow.

A bit further, through a twisty canopy of trees, we reached another lookout on top of some ancient ruins.  We paused to take it in, then walked further down the path, where we climbed a set of stairs to Montfort – the ancient crusader castle itself.

From the top of Montfort, we could see arches and fortifications in the ruins.  And the view to the surrounding area was just as beautiful as before. We took some pictures under an archway, then descended back down the steps towards the continuation of the red trail.

On the red trail, we descended into the valley below.  Soon we reached the first crossing point for Nahal Kziv.  There was a little wooden board laid across the stream.  We walked the plank to the other side and turned right onto the green trail.

We had arrived.  Just a minute walk on the green trail, and we were able to peer down into the Kziv River, a gently flowing stream surrounded on all sides by draping greenery.  We climbed down off the trail to get into the water.  There was a flat rock right in the middle that was calling our name.

We sat right there for a break.  It was cool under the tree canopy.  On went the water shoes so we could put our feet into the stream.  The scene all around us was incredibly peaceful – between the chirping birds, the middle of nowhere quiet, and the little fish at our feet, that rock was exactly where we wanted to be.

The Long and Rambling Route Through the River

After resting on the rock for a while, we climbed back up onto the trail.  It started off in the sun, with cool views up to tree covered cliffsides all around.

But before long we were in the thick of things.  Down in the Kziv Riverbed, there was no space for the sun to peek through.  Trees, tall rocks, and green things created a tunnel around the stream which kept us cool.

The Nahal Kziv trail reminded me a lot of the Great Fork Trail in Sedona, a long walk back and forth over a flowing river.  The green trail wound its way past rock walls covered in moss and over the stream, sometimes leading us straight through it for a while.  We gave ourselves in to wherever the path took us and to all that there was to see and explore along the way.

We saw a little bird, sitting solitary in a small pool of sunshine.  And a flat rock waterfall, that must be impossible to cross when the river is gushing with rain.

We passed by rare purple blossoms, hard to come by in this deep den of shadow.  And giant tangles of tree roots, woven together with large rocks to form the side of the canyon.

We spent hours wandering through this thicket of trees, along the rambling river.  There were so many places to stop – little waterfalls in one place and pools of fish in another.  We were totally taken in.

All Good Things Must Come to an End- Or Must They?

When we finally neared the end of the stream and a change in the scenery, we were prepared to leave the rare beauty behind.  But even as the scenery changed, new beauty unfolded before our eyes.

The stream took us towards white rock walls.  Water coursed through in an effervescent glow.  We followed the trail through the cavern and emerged once again in a forest filled, leaf covered part of the stream.

From here, we could take the black trail back up to the trailhead.  But instead, we decided to continue further on to Tamir Spring.

Ein Tamir was still very wet, but much rockier.  We climbed over large boulders through a group of teenagers, in search of a hidden cave.  We couldn’t find it at first.  But luckily, there was a large group with a tour guide who pointed us in the right direction.

Secret Cave and Back Again

The cave was off to the side, hidden from view.

The opening was narrow, so I was chosen to be the explorer. I slid through the crack in the rock towards the inside of the cave.  I wasn’t sure what good would come of me walking into a water filled hole that seemed to get smaller as I proceeded.  But it was different and interesting, so in I went.

The water at my feet was cool – and completely still.  Thankfully, there were no animals anywhere that I could see.  But the knee level water was so clear that I could see straight down to my feet and the river rock floor of the cave.

After going as far as I could, I turned around and we went back the way we came.

We retraced our steps to the black trail, then climbed up, up, up through the trees.  It was not an easy ascent (actually, this ascent is probably the only reason I wouldn’t bring my little kids here).  But we kept on climbing.

The day was getting late.  The climb was tough.  One would think that we would have had enough.  But there was one more trail that we wanted to explore – the blue trail, or Lily Trail.  We had heard that in May and June, beautiful lilies blossom in the wild along the path.  When we reached the crossroads to the blue trail, we made a right and followed it.

Unfortunately, we didn’t see any lilies along the way (even though it was late May!). But it was no great loss.  The trail was beautiful, and after a brief 1.5 kilomteer detour we were back on the black trail heading up to our car.

Six hours from the time we started, we were back at the trailhead.  We had had a beautiful, exhausting, and exhilarating day traveling from crumbling castles, through a dark riverbed, and finishing up with a climb up a mountain.  It was the type of day that left us feeling both relaxed and weary.

This hike to Montfort and through Nahal Kziv was even better than we had hoped it would be.  It was the perfect way to wander on a hot spring day in Northern Israel.

If you’re looking for an awesome all day adventure in Northern Israel, go ahead and try this incredible hike. It was perfect for a spring, summer, or fall day. Nahal Kziv and the surrounding area were absolutely beautiful. The pictures don’t do it justice.

There are a few different ways to hike this trail. We took the circular route, which worked for us since we had one car. This trail was long and had a big ascent at the end. It’s not for kids the way we hiked it. Maybe there’s a different way that would be good for kids.

There are no entrance fees or facilities at this National Park. Make sure to bring water shoes! You could actually stay dry for most of the hike if you wanted to, but it’s nice to have the option to walk in the water.

To follow the Nahal Kziv trail we took, head straight on the red trail to green. Make a right onto green. After a long, long time you will get to the crossroads where the black trail takes you back to the trailhead (to Mitspe Hila). If you continue on the green trail here you will end up at Ein Tamir. After Ein Tamir (if you choose to go out and see it), retrace your steps and follow the black trail all the way up and back to your car. You’ll see the blue trail on your right as you walk – if you’d like you can follow it, but it’s not a must see. It will loop back to the black trail.

Questions? Tips for fellow hikers? Leave them in the comments below! 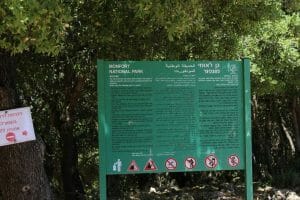 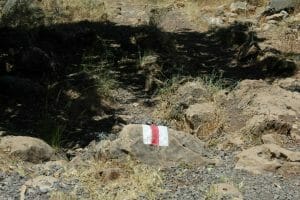 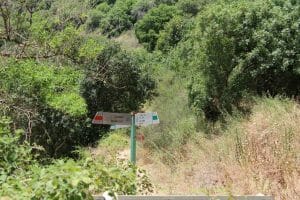 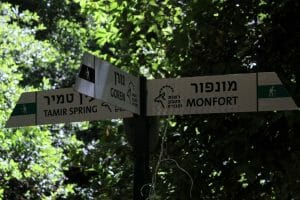 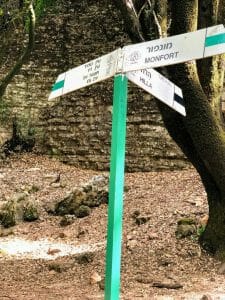 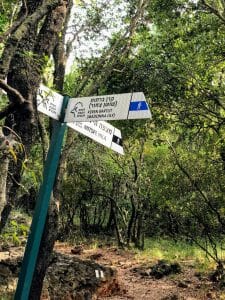 20 thoughts on “Winding Streams and Castles – Montfort to Nahal Kziv”