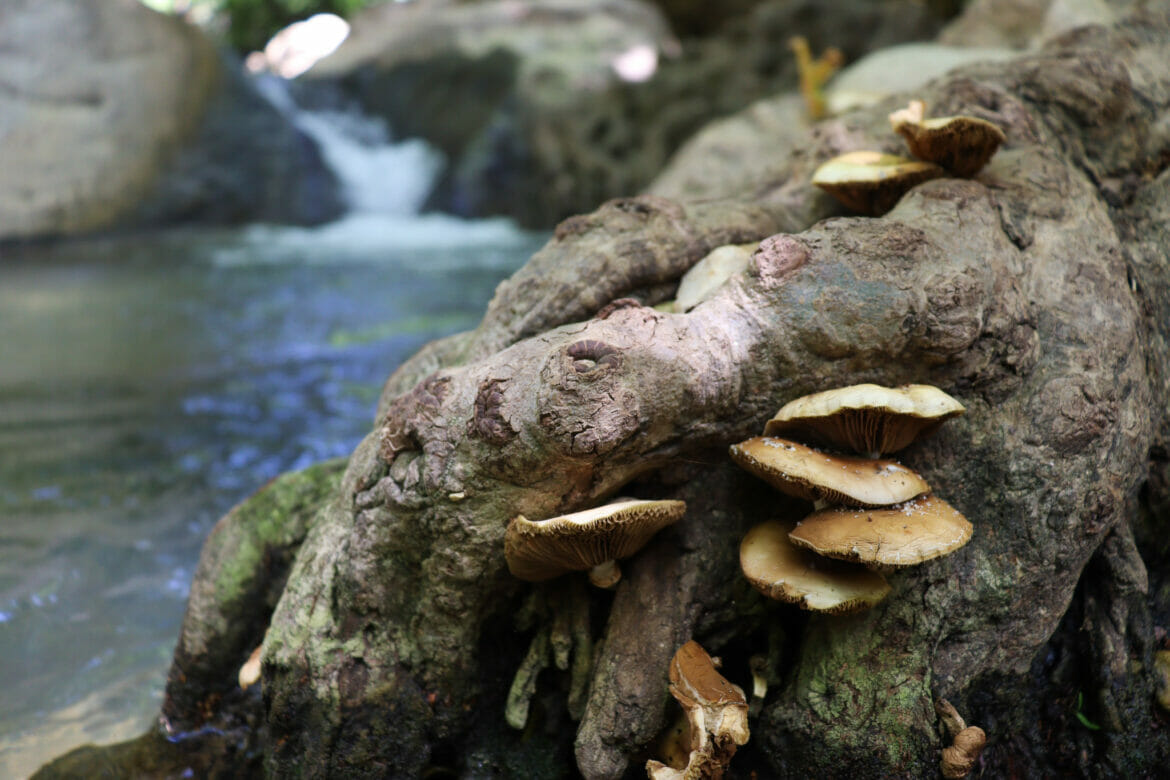 I woke up and peeked out of the tent.  The sky was bright blue, and an early morning moon hovered on the horizon.

After two hard, but incredible days on the trail, we were ready to begin the 3rd and final day of Yam El Yam – our trek from Sea to Sea.

We had begun our the trip at the Mediterranean Sea.  Our journey, so far, had taken us along a jungle-like river, and up a tree covered mountain.  Today we would be hiking along rivers once again.

First, we would follow the trail along Nahal Meron, a small stream near the city.  Once we left civilization behind, the trail would take us to Nahal Amud Nature Reserve, where a beautiful river with white waterfalls flowed past old British bridges and flour mills.

We had hiked Nahal Amud before.  But for the first time, we would be taking the one-way trail.  This longer version of Nahal Amud leads through Upper, Middle, and Lower Amud Streams.  After that, it was a straight path to the Kinneret.

I couldn’t wait to get started.

River by a City

We packed up our stuff and were back on the trail by 7:00 AM.  With our sore muscles and the unknown terrain ahead, there was no telling how long it would take to hike the next 23 kilometers.  We wanted to get an early start.

Past the campground, we found ourselves walking through a tunnel towards a small stream- Nahal Meron.  I was surprised to see a real live river so near the city.  But it was small, and less than idyllic.  It definitely felt like a popular hangout spot for the local teens.

Still, it was fun to follow a path near civilization, as we had been away from urban life for two whole days.  We stepped over rocks to cross the river this way and that until we reached the beginning of the Nahal Amud Nature Reserve.

Where We Leave City Life Behind

Once we had hiked a while, we found a spot in the trees above the river to make breakfast.  Down below, the stream gushed by.  Birds chirped and frogs croaked.  It was the perfect place to stop.

Out came our camping stove and cookware.  We fired it up and were cooking in minutes.

Breaks like these are important on multi day hikes.  Anyway, there was no way we were going to make serious progress without our morning coffee.

When we had finished breakfast, we packed it all up and got back on the trail.  A short while later, we entered the main part of the park at Upper Nahal Amud.

Amud Stream is one of my favorite water hikes in the Galilee.  It’s not just because there’s a beautiful, easy to follow riverside trail.  It’s also not because of all of the quiet pools and waterfalls along the way.

What I really love about Nahal Amud is the magic of the place: in the nature reserve, you feel like you’re in a page out of a history book, maybe somewhere in the United Kingdom.  Old stone bridges stand covered in trailing ivy, the archways underneath revealing pools of sunlight reflected in the water.  Flour mills, birdbaths, and stone benches are scattered throughout the park, under a thick canopy of trees.

Just like the first day on the trail at Nahal Kziv, in Nahal Amud there was an abundance of dragonflies, in shades of neon blue and green.

We made sure to get our fill of swimming and dunking, then continued on our way towards the less traveled part of Nahal Amud.

I wasn’t sure what to expect out of Middle Nahal Amud.  Would it be beautiful?  Or was it less traveled because it was less awesome?

As it turned out, Middle Nahal Amud was every bit as beautiful as Upper Nahal Amud.  The only difference is that there was nobody there.

We had aquamarine pools with rushing waterfalls all to ourselves.  Since we had already spent plenty of the morning in the water, we didn’t waste too much time relaxing in the shade.  And that turned out to be a good thing – because the second part of Middle Nahal Amud up ahead, that was tough!

At some point, the trail led us up and above the river.  We climbed higher and higher, up and down, along a series of rocky cliffs.

We were hot and tired.  Down below, we could still hear the stream gushing along – but there was no chance that we were climbing back down again to find a place to go in.  We had gotten this far with our packs on our back.  We would just have to keep going.

Up and down we continued, ignoring the blisters that had now formed as we hustled over the rocks.  The sun glared overhead.  I used muscles I didn’t know I had as I figured out how to propel myself up, yet again, with a 25-pound backpack.

My personal opinion is that on any other day, we would have thought this was an awesome hike.   Maybe it was a little hard, but nothing we couldn’t handle!

But after 60+ kilometers of hiking, and with added weight, it was more than we had bargained for.

By the time we had finished Middle Amud Stream, we were just about out of water.  Supposedly, we would reach a water point right before Lower Amud Stream.

We checked our map and followed signs, all to no avail.  Where was that darn water point?  After searching some more, we finally found it – off the trail in the other direction and BEHIND a Mekorot pumping station.

We breathed a sigh of relief and refilled our bottles.  Next stop: Lower Nahal Amud.

When we reached Lower Nahal Amud we were ready for another break.  It was past 3:00 PM, and we still hadn’t eaten lunch.  Not only that, but my husband’s blisters needed some attention.  We sat down to make lunch and whipped out our trusty first aid kit.

Although we were exhausted, the scenery at Lower Nahal Amud where we sat was really beautiful.  I had expected more gushing streams.  But instead, white rock gleamed from the bottom of the riverbed.  Pink flowering plants grew everywhere.  And in the distance, craggy cliffs framed the canyon.

We took a much needed half hour break before setting off on the last part of our journey.

By now, we were ready to cross the finish line.  Lower Nahal Amud was so cool, but we attacked it at hyperspeed.  I found myself jumping from boulder to boulder.

We walked over white river rocks.  It looked almost like a desert riverbed.  In the bushes and reeds, we saw animals – a baby wild boar, a nutria.

The cliffs above were really spectacular.  It was these rock formations that made Lower Nahal Amud truly unique.

Eventually, we neared the end of the Nahal.  Here, pools of water and waterfalls formed again – crystal clear, with a floor of smooth river rocks.  Up ahead, the pillar which Nahal Amud is named for appeared (amud = pillar).  We passed it, then said goodbye to its reflection in a pool of water as we made our final approach to the Kinneret.

Those last few kilometers felt like an eternity.  There we were, in banana groves once again, just like we had been on the very first day of Yam El Yam.  We walked, and walked, and walked some more.  I felt like a woman with a purpose: ignore the pain, the fatigue, the aching muscles.  Just reach the Kinneret.

And then suddenly, we were there.

Or were we?  It was water alright – but instead of a vast turquoise lake, all we saw was a little puddle with lots of trees and bushes interspersed through the water.

We saw a man on the phone and asked him for help: Where was the Kinneret?

“This is the Kinneret!” he replied.  Funny enough, the lake had gotten so full from this year’s plentiful rainfall that it had actually overflowed into the surrounding area.

We went off in search of a place we could access the beach.  But even the path that encircles the lake was cut off by flooding.

Luckily, a man in a fish farm took pity on us.  He saw us wandering, then unlocked his gate and led us to the other side, towards the beautiful, flooded Sea of Galilee.

I threw down my backpack and ran into the water.  Nothing had ever felt so refreshing.

Night was falling.  The beach was empty.  We had made it – our incredible trek across Israel from one sea to another was now complete.

We had blisters and sunburns, scratches and bruises.  But the experience of leaving regular life behind to explore the sights along one of the most beautiful treks in Israel  – it made every step worth it.

Here’s what you need to know to hike this trail from Nahal Meron, through Nahal Amud, to the Sea of Galilee:

Read about the Yam El Yam experience by clicking here.

Read about Day One and Day Two.

Questions? Have you hiked this trail through Nahal Amud to the Kinneret? Let’s hear about it in the comments!