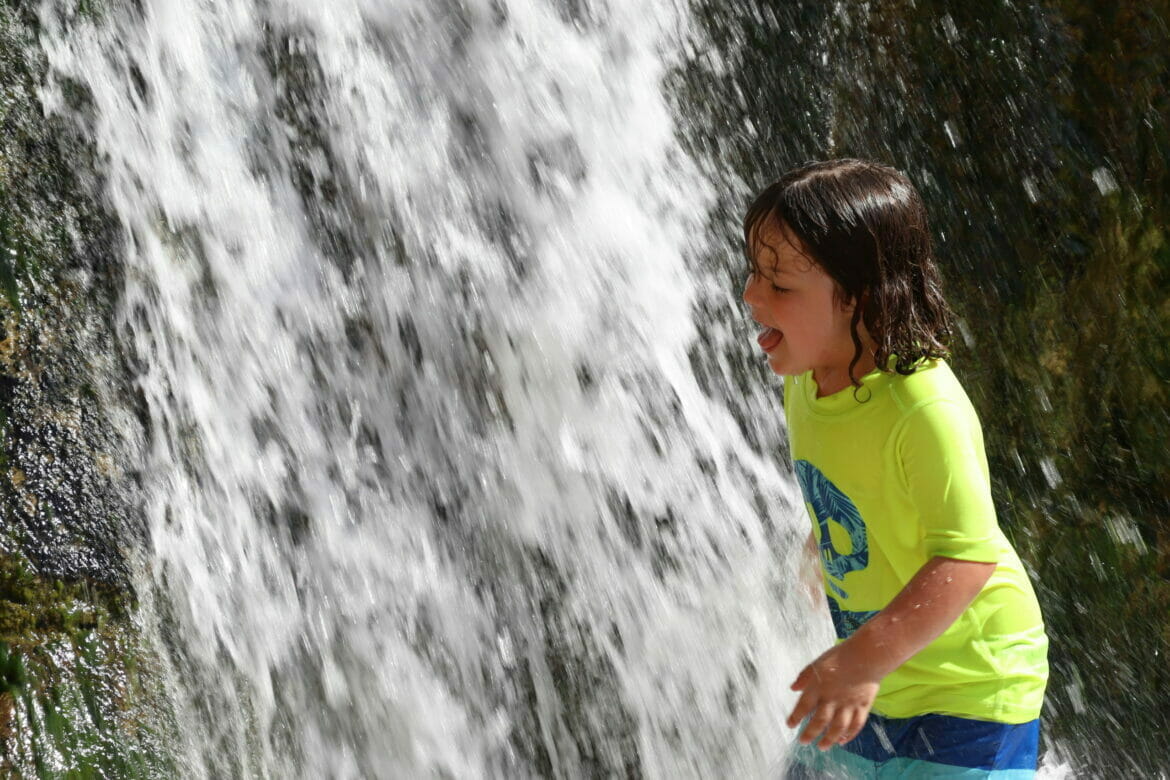 The beautiful world of waterfalls at Nahal David is a must visit for tourists and locals alike.  It’s one of the most easily accessible, user friendly, stunningly beautiful water hikes in the country.

This past week, on a warm summer day, we decided to hike Nahal David in Ein Gedi for the umpteenth time.  Even though we’d been there before, we knew that our kids would love it.  The walk along Nahal David is a perfect hike for small children in the summertime.  And somehow, the scenery on the path seems to change each time we go.

So, we packed up our bags, put on full swim gear, and drove off through the desert.  Our goal was to get to the park at 8:00 AM, just as it opened for the day.  We figured that getting there early was our best chance for quiet trails and waterfall pools.

Here’s what we experienced on this serene and fun filled walk:

We pulled into the parking lot right on time.  But of course, we weren’t the first ones there.  There were several small groups of hikers already waiting to get into Ein Gedi.

We headed towards the booth, showed our Parks Card, and started on the trail.  Only a short distance in, we were greeted by a herd of ibex, coming closer to the path to relax in the shade.  They were small animals, in pretty shades of sandy tan, and they seemed uncharacteristically graceful under the tree canopy.

My kids thought it was super cool to see these animals in their natural habit.  It took a good ten minutes to coax the boys away from the herd and lead them towards the first waterfall.

But once we reached the first waterfall pool, no coaxing was necessary!  My boys made a beeline for the falls.  The pool at our feet was refreshingly cool.  And an easily accessible cascade poured down the side of a cliff.

The water was shallow – only reaching our ankles.  The waterfall itself was pint sized, but still very powerful.  For some reason, none of the tourists sitting around the pool were drawn towards the whitewater rush.  But my kids took turns putting their head right in the powerful crash of the stream.

They danced in the falls, splashed in the falls.  They opened their mouths to taste the falls.  As far as those boys were concerned, this first mini waterfall was more exhilarating than a roller coaster.

We spent plenty of time there, getting completely wet in anticipation of the rest of our hot hike.  Then we dragged them away with the promise of more waterfalls to come.

Our Own Private Swimming Pool

We climbed through the red hued desert mountains along Nahal David.  After a short walk, we saw a little pool off to the side behind some rocks, with its own private waterfall.  There was no one there (it was slightly off the path), so we broke away from the trail to check it out.

There was shade to sit in under a giant boulder.  Past the rocks, Nahal David streamed past in a gentle trickle at our feet.  And still further, large rocks were strewn haphazardly, forming a little den of cool water in the shade.

We climbed up and into the pool.  A mini waterfall streamed down, the perfect size for my four year old to get a freshwater shower.  Deep in the shadows of the tree, a nutria (a beaverlike animal common in Ein Gedi) was taking his morning nap.

We tried not to disturb the animal as we climbed over rocks and splashed in the pool.  And ultimately, we ended up sitting in the shade of the large boulder while our kids played in the water.

Just Around the River Bend

After that pool, we moved on to see the incredible sights along the rest of the path.  There were little shadowy tunnels, full of glistening water on rocks.  There were pools here and there, each with their own cascade of mist.

We made sure to hit every nook and cranny on the path.  None of the pools were too big or deep for my little boys.  They splashed their way through Nahal David, avoiding the heat of the desert sun by staying wet in the shadows.

After a full morning of exploring the paradise of Ein Gedi, we finally made it to the large waterfall – Mapal David.

Mapal David is the end of the line, where the water pours from Ein Gedi Spring down into the largest pool of the Nahal David trail.

Algae, moss, and ivy grow under the shadows on the rock, while sprays of waterfall mist pour down in many directions.  The pool beckons, just begging to be climbed into.

But unfortunately, there is a rope around the pool and a sign that declares entrance forbidden.  In years past, falling rocks have become a danger to people in the water.  So now, visitors have to take in the beauty from a distance.

On the side of the pool, there’s a place to get close to the green covered wall.  Here, you can watch the condensation drip down and touch the soft blanket of moss that grows everywhere.  We spent a few minutes there, inspecting the greenery and the small black snails nestled in between, then turned back in the other direction to the park’s entrance.

From here on in, we thought the fun was over.  We expected a hot walk through the desert mountains back to our car.

But things must have changed at Ein Gedi in the past couple of years, because we walked along the stream almost the whole way back.  There were several quiet waterfalls left to explore.  And places to play in pools in the shade all by ourselves.

It wasn’t easy to get our boys out of there – they were having too much fun to stop.  But we finally convinced them that it was time to go.

Been there, done that?  If you live in Israel, maybe so – but Nahal David at Ein Gedi National Park keeps you coming back for more.

This breathtaking oasis of beauty in the desert is one of Israel’s most incredible natural wonders.  Somehow, Ein Gedi manages to be both serene and fun-filled at the same time, every time.

Whether you’ve been there or this is your first time, Nahal David at Ein Gedi is pretty much guaranteed to be an amazing experience. My advice for the summertime and holidays is to try to hit the park early in the morning or later in the day. That’s when its cooler and less crowded.

Things to know about Nahal David/ Ein Gedi: There’s an entrance fee to get in. You can also use your Parks Card. There are great facilities on site with bathrooms, water fountains, a big store, and a food stand. You’re not supposed to bring food into the park, but there is a large shaded picnic area outside.

Make sure to head for those quieter pools when you see them on the path. Just because there aren’t a lot of people there doesn’t mean they aren’t worth exploring. Some of the most beautiful spots are slightly off the beaten track.

You don’t need any maps for this trail through Nahal David. They’ll give you a park map when you get in, and the trail is very well marked. Just show up and have fun!

What do you love about Ein Gedi? Any tips for fellow hikers? Let’s hear about it below!

10 thoughts on “Nahal David at the Ein Gedi Nature Reserve”