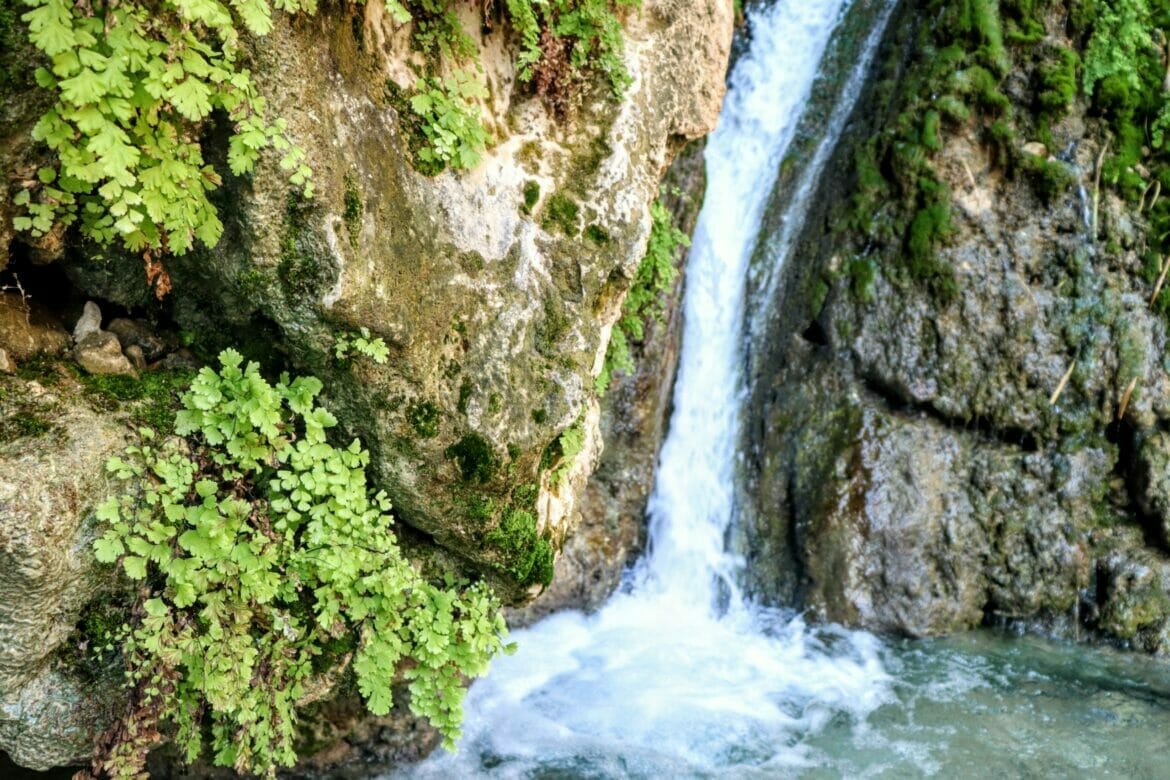 A secret oasis in the desert is hard to come by.  Where there’s water in a desert in Israel, there’s usually a crowd of people.  And Ein Gedi is no exception.

But wander off the beaten track at the Ein Gedi Nature Reserve, and you’ll find hidden marked trails with beautiful waterfalls and crystal pools.

Last year, we explored Nahal Arugot, an easy alternative to the tourist favorite at Ein Gedi, Nahal David.  We’ve also climbed Mt. Yishai and journeyed to the Hidden Waterfall in the Dry Canyon (all part of Ein Gedi Nature Reserve).

This past Friday, we discovered yet another trail towards the secret side of Ein Gedi – the path to Ein Gedi Spring and Dodim Cave.

The course up to these less traveled sights was a bit of a challenge in the intense summer heat.  But the pools at the end were cool and quiet.  Almost magical.  It made the trek up completely worth it.

Here’s what we saw along the way:

We started the trail at the main entrance to Ein Gedi, along with all the tourists and day trippers.  It was early in the morning, but we could already see the place filling up, as it often does during high season.

After showing our parks card and getting a map of the park, we made our way through Nahal David at a faster pace than usual. We weren’t going to stick around and dip in the pools down there.  If we had time at the end of our hike, we’d get back to them.

Rather than follow the flow of traffic, we took the path that leads hikers back to the entrance of the park.  Along the way, we saw packs of desert ibex (those guys are comically cute every time!) and skipped over a few pools as we walked toward the breakaway path.

When we had almost reached Mapal David (David’s Waterfall), we saw the turnoff to the left and a sign pointing up towards Ein Gedi Spring.  We broke left and began the climb.

Working Up a Sweat

I’m not sure if we were still a bit shell shocked after our recent travels or just very out of shape from summer relaxation, but I’m not going to lie – the next twenty minutes weren’t easy.  We climbed at a slow and steady pace in the 90 degree heat.  Sweat pooled under our backpacks.  And the climb seemed much harder than that sort of climb usually does.

We took a few stops along the way for cold drinks of water.  The weather was kind of hazy, but the views out to the desert mountains and the Dead Sea beyond were still totally incredible.

We passed by the first hint of water to come – Shulamit’s Spring.  This shallow pool wasn’t particularly exciting, but it was a good place to stop in the shade and catch our breath.

Eventually, we made it to the top and the crossroads.

Is it Breakfast Time Yet?

We debated where to go first – Ein Gedi Spring and the Chalcolithic temple ruins to the left or Dodim Cave to the right?  In the end, our hunger got the best of us.  We broke left towards Ein Gedi spring where the National Park Authority officially allows food and drink.

Within a few minutes of following signs, we had arrived – at a green area with a shallow pool of water and streams all around.  Rather than jump right in, we stretched out under a tree for a long iced coffee break.

Twenty minutes later, refreshed and re-energized, we went to check out Ein Gedi Spring itself.  It was really beautiful – a single clean pool of water in the midst of unbelievable desert scenery.  We dipped our feet but decided that we would continue on towards Dodim Cave which we had heard was even more spectacular.

Temple Run and on to the Pirates Cove

Following the circular path, we made our way towards Chalcolithic temple ruins.  Supposedly, the ruins date back 5000 years.  The people of that time positioned their temple in this incredible spot, overlooking the Dead Sea, where they could use water from Ein Gedi spring for religious ceremonies.

The view from the spot was, indeed, incredible.  We climbed up onto a jagged cliff for a better view.

On we continued, back towards the crossroads, where we now took the path to Dodim Cave.  The trail wound through the desert for about ten minutes, reaching a series of waterfall pools surrounded by chalky white rock.

Save the Best for Last

Almost immediately, we could see that Dodim Cave was going to be even more beautiful than we had expected.  The trail led down, and then up, through a labyrinth of alabaster stone.  Waterfalls poured through this way and that, forming aquamarine pools all over the place.

There were people there, but that didn’t mean that you couldn’t find your own pool all to yourself.  The white rock formed little chambers, creating mini soaking spots for everyone.

In pursuit of Dodim cave itself, we climbed up and over the rocks, and followed the signs towards our destination.  We reached the last arrow, which lead us down a series of metal handholds on the side of a rock wall, and then we were there.

A waterfall cave – what does that even mean?

Imagine a scene out of Pirates of the Caribbean or the Goonies – dark and magical rock, with crystal water at the bottom.  The only difference at Dodim Cave is that half of the area is out in the sun, creating pockets of warmth and sunlight to bask in.

To get into the cave itself, you walk through a wall of water droplets, dripping down from a tapestry of moss and hanging plants.  Inside, we sat on a stone and dipped our feet, watching the waterfall crash down in the sunlight.

Then we climbed the wall of the cave to catch a bird’s eye view of the incredible nature just beyond.  As we sat, we saw black birds playing where the waterfall crashes into the upper pool.  We watched as they swooped out through the canyon walls past the cave, towards the area above David’s Waterfall.

We explored Dodim Cave and the pools around it for all of thirty minutes.  Then it was time for us to go.

Plans for the Future

To get back, we crossed through the pool and climbed the metal handholds on the other side.  Then we returned the way we came – all the way back to the crossroads and down towards Nahal David.

Along the way, we made plans for the future – to a time when we would return to this trail with our kids.  The climb would be a challenge, but perhaps if we left really early in the morning we could have Dodim Cave to ourselves.  At a slower pace.  No rushing to get back home.

Of course, we didn’t end up having the time to stop in Ein Gedi proper this time around.  But we didn’t feel that we’d missed out.

Dodim Cave was an enchanted oasis, mysterious and dark.  I can’t imagine a better place than this to experience the magic of Israel’s nature in any season.

This less explored side of Ein Gedi would be great at any time of year. I can just imagine how beautiful it would be on a cloudy fall day. On a hot day, the climb up is tough, but the cool payoff at the end is incredible.

This trail is moderate in difficulty. That means that some kids will be able to hike it and some won’t. The climb at the beginning isn’t easy, but it is relatively short, and could be pretty manageable on a cool day. There are also several places on the trail towards the Dodim Cave where you need to hold onto railings and navigate over rocks.

If you are choosing between Ein Gedi Spring or the Dodim Cave, go for the cave. Ein Gedi spring is nice and the ruins are interesting, but the scenery isn’t that different than what you would see in the rest of Ein Gedi.

This trail is part of the Ein Gedi Nature Reserve. There’s a fee to get in, or use your parks card. There are facilities and maps on site. No dogs allowed.

To find your way, pick up a map at the trailhead. Then follow the path through Wadi David. Right before David’s Waterfall (or after, depending on which way you are coming from – we came in the way people leave) you’ll see a breakaway trail towards Ein Gedi Spring. Follow the path out to Ein Gedi Spring, past the temple, and back towards the crossroads. At the crossroads, make a left to go to Dodim Cave, then go back the way you came.

One nice thing about this trail is that the ascent is at the beginning. That means you can get it out of the way early in the day, while it’s still cool. Once you soak yourself in the pool you’ll be good to go for the whole trip back.

Questions? Tips for fellow hikers? Let’s hear it in the comments below! 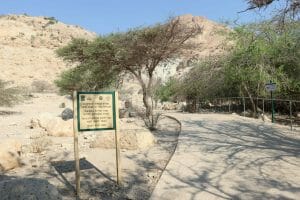 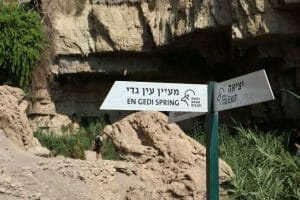 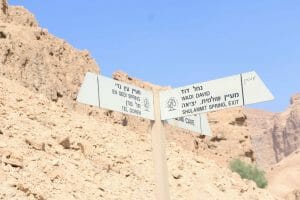 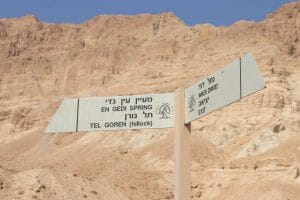 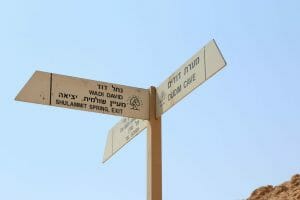 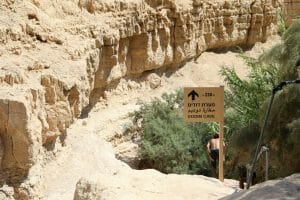 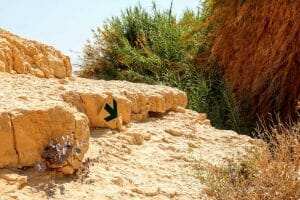 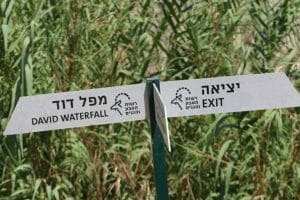 Ein Shaharit – Journey Towards an Oasis