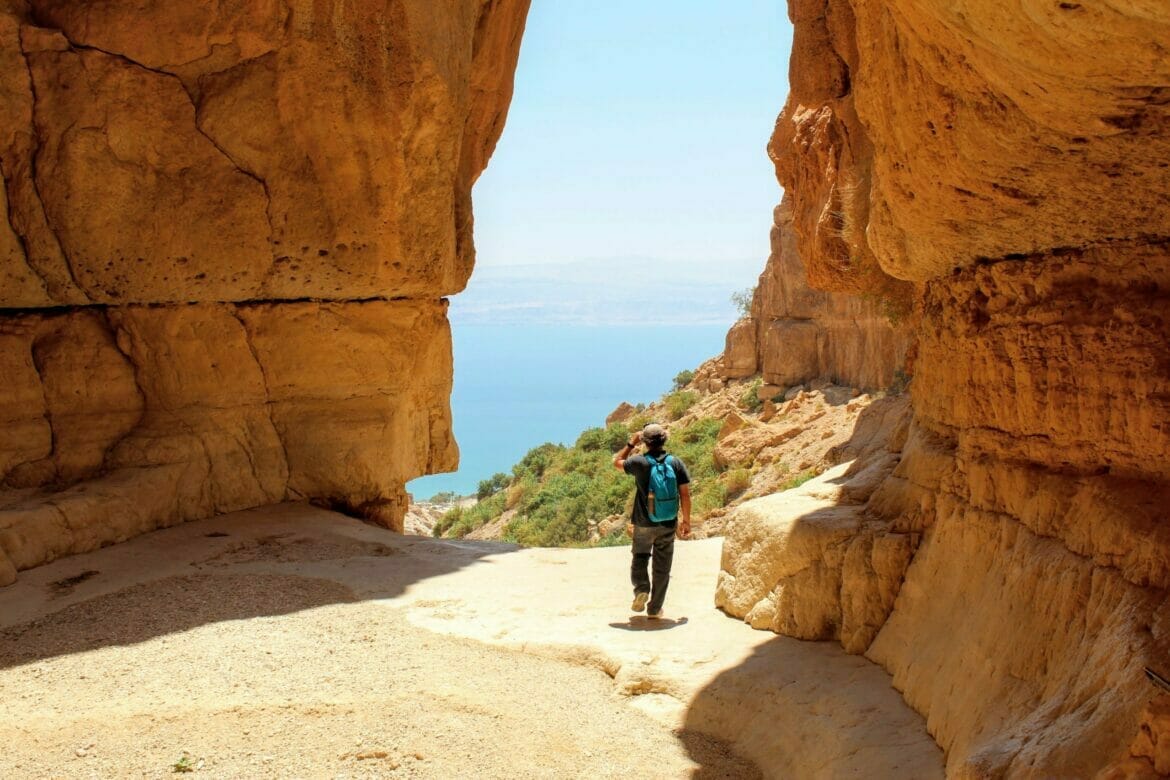 The prudent side of me wants to begin this post like this: Warning!  Don’t go on this hike.  Danger!  Risk of dehydration, falling, broken bones.  Just enjoy the pictures instead!

But the seize the moment side of me wants to say: Wow.  I wish I could go on a hike like this every day.  Or at least twice a week.  Because going every day might hurt.  Just do it if you can.

Let’s back up a bit to this past Friday.  New summer hikes close by were beginning to be a bit challenging to find.  We’d done a lot of Jerusalem area woodland hikes.  But I wanted to save the rest for cooler weather, when green and blossoming scenery would translate into more compelling photographs.  The Galil and Golan were too far away for a Friday morning.  Which left us with…the desert.

Desert and summertime don’t seem to go together.  Especially around the Dead Sea, the hottest region in Israel.  But if we left really early in the morning on a cool-ish summer day and packed lots of water…maybe, just maybe, it could be amazing!

So, this past Friday, we got up early and drove down to Ein Gedi.  Our plan for the day was to climb a desert mountain (Mount Yishai) and then climb down a desert canyon towards the Window Waterfall (and back up again).  The reward for all this hard work was going to be spectacular desert scenery and an unbelievable view.  Along with really cool climbing along the way.

And every single step was absolutely worth it.

We started off the trail at the Ein Gedi Field School.  We found the black path towards Mount Yishai behind the building and began the ascent.

The trail was divided up into two parts.  The first four hundred meters of the climb were supposed to be at a reasonable incline.  But once the path broke into two for the second time, the last two hundred meters were going to be very steep.

So, we plodded along, slowly and steadily up Mount Yishai.  We’re usually not very good about taking breaks when we hike, but this time we made sure to stop whenever we found a patch of shade, to take a long drink and a short rest.

The views as we climbed were already incredible.  The still blue waters of the Dead Sea stood out beyond the reddish rock of the desert.  Mountains on the Jordanian side of the sea glowed purple in the distance.

After a lot of hard work on our quadriceps, we made it to the first split in the trail.  Here, we met a group of orange clad mountain rapellers, climbing back down after a morning on the cliffs.  We said hello and continued up on the black trail.

Quiet in the Desert

We knew we still had quite a way to go before getting to the last two hundred meters.  But we continued at our slow and steady pace, enjoying the sights and sounds all around whenever we stopped to catch our breath.

White and red mountains stretched out for miles around us.  We could see the green valley of Nahal David in Ein Gedi down below.  It was quiet up there on the desert mountainside.  The only sounds that broke the silence were birdcalls from a nearby cliff.  A breeze blew softly in our ears.

Before long, we reached the crossroads to the green trail.  We had completed the first four hundred meters of the climb and were ready for the last two hundred – the steepest part of Mount Yishai.

The funny thing about desert mountains is that you constantly feel like you’re in some sort of mirage.  The top always seems so close.  It’s a trick of perception – since there’s not a lot of contrast along the way, the giant pile of rock appears to be a much smaller pile of rock.  As you climb, the top doesn’t get closer.

At some point, I stopped looking towards the peak and just concentrated on the path at my feet.  It’s easy to let your thoughts wander while you put one foot in front of the other, in the complete quiet of a desert mountainside.

And then, almost without even realizing it, we were there – at the summit of Mount Yishai.

Up top, we had a 360 degree view of the desert landscape around us.  In front of us, the Dead Sea stretched out in shades of blue and green.  We saw endless pools of salt stuck to the silent shore.  To our right was Nahal David, green in contrast to the reds and tans of the entire area.  And more desert mountains towered around us in the distance.  It was spectacular.

We spent a few minutes taking in the views before heading back down the mountain to find a place to relax in the shade.

Did You Think the Fun Was Over?

I would have thought that after climbing Mount Yishai, there wasn’t much excitement left for this hike.  But after eating breakfast alongside some birds in the shade of an overhanging cliff (actually, that cold iced coffee may have been the best part of the day!) we continued to the next highlight of our journey.

We followed the green trail across a ridge towards a flash flood riverbed.  When we reached the crossroads to the red trail, and the riverbed itself, I didn’t see how we could climb through it.  The canyon seemed to drop repeatedly in steep, smooth inclines – it didn’t look like there was anything to get a foothold on.

But we decided to trust the trail map.  We passed by the first red crossroads (where we would climb out of the riverbed later) and continued on the green path to the next red crossing point and the entry to the Zafit Trail.

Trust Your Hands and Feet

And down, down, down we went, climbing on jagged rock, passing right by dangerous drops, with nary a safety bar in sight.  This climb down into the valley below was not for those who are scared of heights.  I let any fear of falling go and put total trust my body’s strength and balance as we descended.

Until finally, we were in the canyon below.

From here, we decided to break right onto a a dead-end trail towards the Window Waterfall.  We had no idea what to expect.  But as we continued on the trail, sometimes sliding a couple of meters down on natural rock slides to get to the next level, I hoped that whatever it was was worth it.

We followed the sporadic handholds to find the “correct” path as we descended.  Soon, we were in a white rock tunnel that towered around us on all sides.  We passed a still green pool.  And we were there.  At the Window Waterfall.

Window to the World

Blue, green, red, grey, white.  Contrasting colors burst forth in front of us.  The canyon walls themselves were striking, forming a sculpted window to the outside world.  But the view out of this particular window was like a perfect painting.

The green valley of Ein Gedi lay down below.  Up ahead was the Dead Sea, still and blue and striking.  Then came purple mountains, white clouds, and blue sky again.  All perfectly wrapped up inside the walls of red rock.

This space was serene and otherworldly.  Needless to say, it was completely silent in our little room with a view, save for pairs of singing birds that occasionally swooped through to the valley below.

There were white rock seats all around the crevice.  And an emerald green pool of water at the back.

During rainy season, flash floods run through the riverbed, creating a crashing waterfall through the window into the valley.  We’ve heard that it’s a great place to come just as the weather clears up, when you can swim in the pools left behind by the rain.

It was getting late.  It was time to turn around and go back the way we came.  But was the fun over?  No way!

Now we had to climb up all of those smooth and rocky cliffs we had descended to get down here in the first place.  Since I enjoy a good climbing challenge, this was actually my favorite part of the whole hike.

We made our way back, finding a place to put a few fingers here, a rock to place a foot on there.  At some point, I had to ditch my camera to maintain balance and hoist myself up.  But since we were focused on the task, the whole climb out of the red canyon didn’t take long.  Soon we were on the trail heading back to the Ein Gedi Field School.

As we passed by crystal blue views of the sea in the distance, I couldn’t believe what an amazing day it had been: a mountain climb, coffee on a cliff by the sea, a crazy descent into a beautiful solitary room with a view, and a wall climb in a white rock canyon.

Only in Israel can I drive about an hour from my home on a forested mountain and stumble upon a landscape like this.  This hike around Mount Yishai was an incredible journey through quintessentially exotic Israeli scenery.

So, if you are in excellent physical shape, you must add this hike up to Mount Yishai to your Israel bucket list. If you are in great physical shape and you have a little bit of climbing experience, then you shouldn’t have any trouble getting all the way down to the Window Waterfall. This hike isn’t for novices, children, dogs, or anyone who is uncertain about climbing.

If you decide to try this incredible hike, take plenty of water and wear a hat and sunscreen. Always keep an eye out for trail markers and don’t veer off the path. Wear appropriate clothing and footwear and be careful as you climb.

The day we went (in the middle of the summer), temperatures were in the nineties. Obviously, this is not ideal. It’s better to go in the fall, winter, or spring. But I have to say, the heat didn’t bother us very much since we were well equipped. If you want to go in the summer, try to start early in the morning so you can cover the first mountain climb (which is totally exposed), before it gets hot.

If you go in the winter post flooding, it’s possible that you may have to get wet to get to Window Waterfall. There were some small pools when we went, but we could climb around them easily. The benefit to going in winter is that you can actually swim in these pools. In the summer, the water is too stagnant to go into.

Don’t forget to read my guide to the navigational features in this post before you go.

Questions? Have you hiked this trail? Share your experience in the comments below! 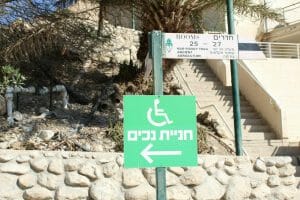 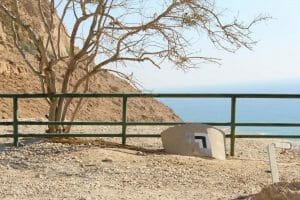 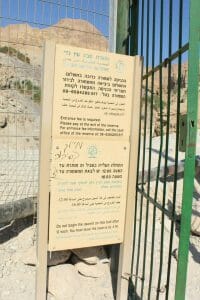 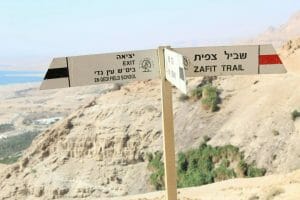 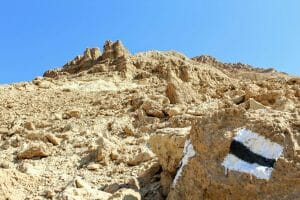 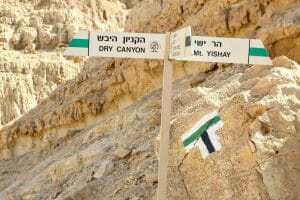 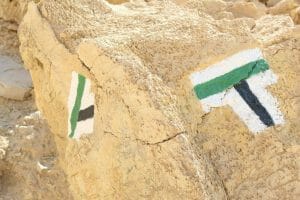 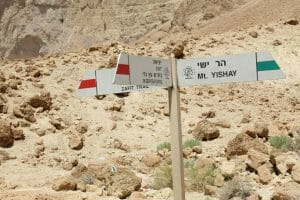 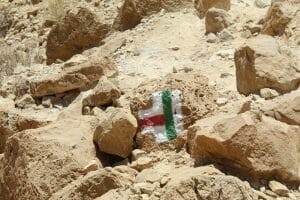 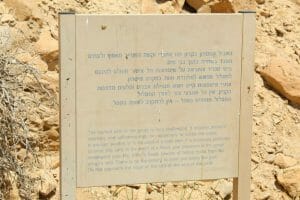 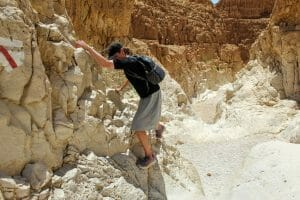 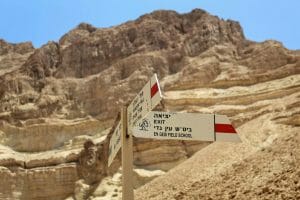 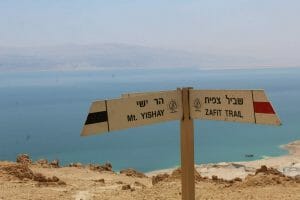 6 thoughts on “Mount Yishai and the Window Waterfall”