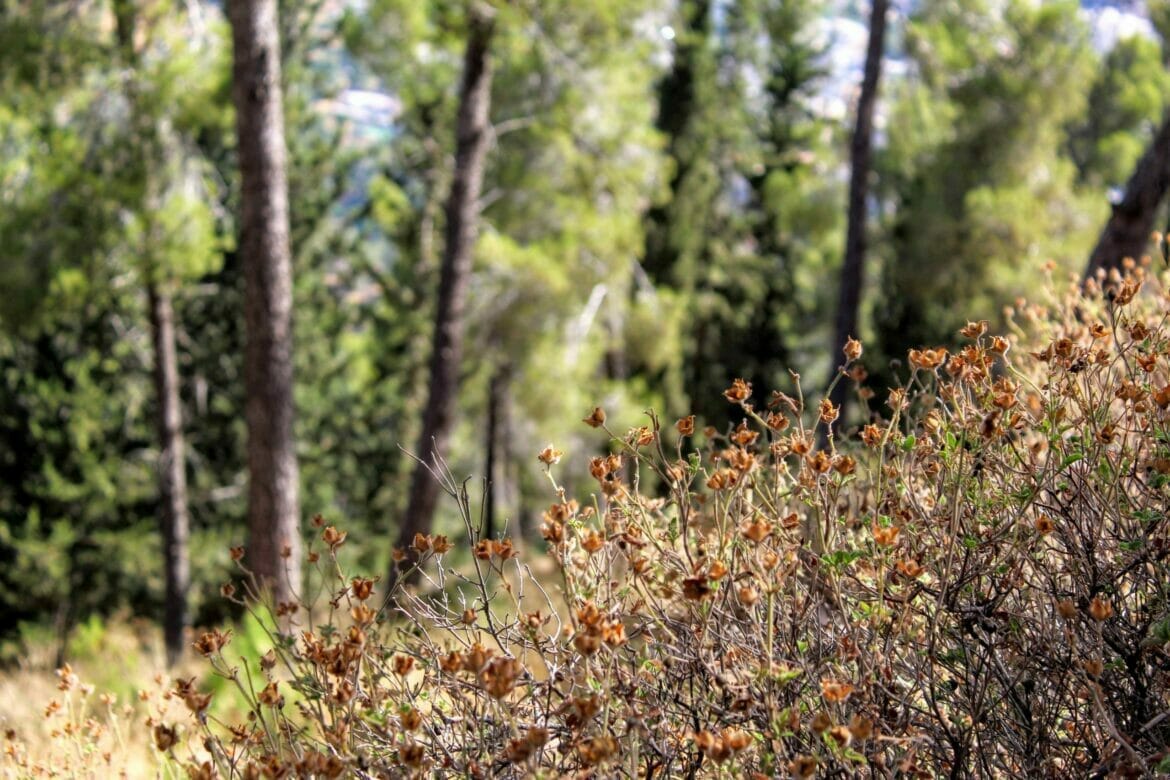 I remember driving through the Jerusalem Forest when we first moved to Israel.  My husband worked in Givat Shaul. We lived in Beit Shemesh.  And between the highway and the hubbub of Central Jerusalem lay a quiet woods.

I probably drove through that forest less than twenty times.  But it always seemed so magical, so different than what was typical Jerusalem.  Tall trees surrounded the single lane road.  Birds chirped up above.  It felt like we were driving through an American countryside.

Now I know better- there are many beautiful forests around Jerusalem.  But I still knew that at some point we had to find a hike in my first favorite forest in Israel – the Jerusalem Forest.

Turns out that there’s an easy to follow, five kilometer trail that leads through some of the best parts of the forest – Shvil Haerez, or the Cedar Trail.  Here’s what we saw along the way:

The trail begins right near the neighborhood of Yefe Nof.  We descended a set of stone steps and followed the pathway marked Shvil Haerez.

We were immediately taken to a world of natural beauty, all alone in the trees.  But we could see that this forest was far from lonely.  Just looking around, it was clear that lots of people use this beloved hideaway as place to hang out.

There were remnants of a bonfire on one side.  An old couch on another.  We plowed forward on the blue path to see if we could get further away from civilization.

On the next part of the path (which was still quite close to the nearby homes) we passed a few dog walkers and joggers.  It must be nice to have a forest in your backyard.

The Whispering Quiet of Summer

We continued to follow Shvil Haerez through tall golden reeds under a canopy of evergreens.  At this time of year, there wasn’t much to look at.  The rich green of the rainy season had faded.  There were no colorful flowers of springtime.

On some parts of the path, we could see out to the neighborhoods of Jerusalem.  Crickets chirped from somewhere in the distance.  And a gentle summer wind blew through the wild wheat around, creating a faint rustling sound.

We followed the blue trail wherever it took us – down a treeless path through tall yellow grasses,  down a set of steps, past a view of the city, then back up another set of steps.

Soon we reached some sort of monument to the park, near a picnic area and playground.  We took some pictures, then followed the path up the hill.

From here, we chose to take a short breakaway trail to explore two features of the park.  First up, a cedar tree planted by Ben Gurion himself.

The tree was surrounded by a stone patio.  Maybe that’s why it was so tiny, a dwarf compared to its tall tree brothers all around.  It was hard to believe that this tiny tree was planted over 50 years ago,

Next stop on the trail: a small cave on the inside of the mountain.  The cave was the size of a little room, with a tree root ceiling.  There was a sign in front telling the story of a man who lived inside the cave for eighteen years.  He recently moved out to a nursing home, so now the cave sits abandoned.

We decided to climb up off the path a bit to find a flat rock to sit on under the trees.  The diminutive wildflowers of summer poked through our carpet of pine needles. Out came the coffee.  Our border collie started up a game of pine cone fetch.

After spending some time really relaxing in the Jerusalem Forest, we picked ourselves up and continued back toward the main trail.  From here, we climbed through the trees and out towards the end of the path.

Back at the trailhead we considered the hike.  Was it spectacularly beautiful?  Unparalleled scenery?  No and no.  But it was a full -fledged forest.  And the five kilometer hike through the woods was only a short bus ride from the center of town.

So maybe it’s not a pristine nature reserve.  But Shvil Haerez in the Jerusalem Forest is a beautiful walk through real woodland scenery, just minutes from the hustle and bustle of the city.

This trail would probably be really pretty in springtime. From experience, I’m guessing it would be full of wildflowers. But in any season, it’s an easy escape from the rush of the city, to a 5 kilometer walk through the woods.

It’s short enough for kids but there’s not a ton to see along the way. On the other hand, there is a playground and picnic area smack in the middle.

The walk isn’t flat, there is some ascent and descent which makes this 5 kilometer hike take a bit longer than you would expect. To hike it, look for the trailhead/sign, then follow the blue trail markers the whole way through. When you see the sign for Ben Gurion’s Cedar, you can veer off the path and then return back to it.

Keep your eyes peeled for blue trail markers – they are not always where you would expect to find them, and you will wander off the path if you don’t pay attention!

Have you hiked through the Jerusalem Forest? Any tips for fellow hikers? Leave them in the comments section below!

The Best Hike in Jerusalem

6 thoughts on “The Jerusalem Forest – Wilderness in the City”