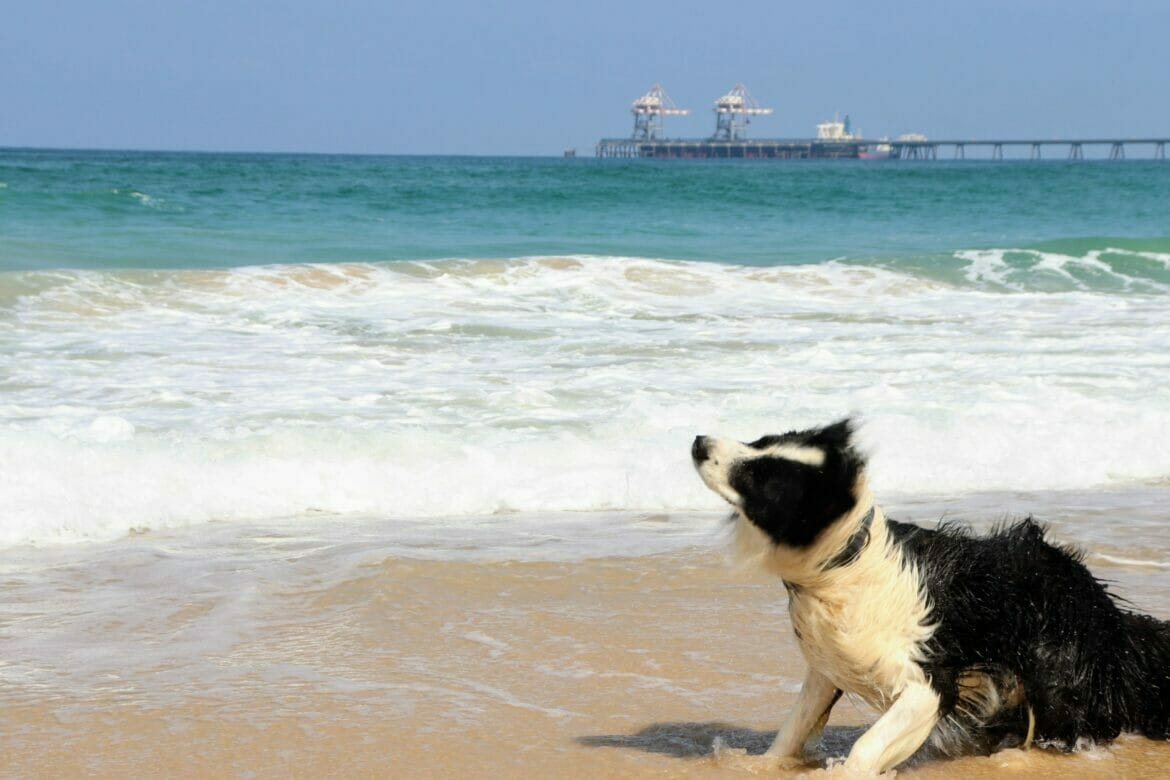 Some of the best hikes in Central Israel trail alongside rivers, to sand dunes and quiet beaches.  There’s the Sorek River Estuary at Palmahim, where craggy cliffsides are filled with the most beautiful shells in Israel.  Nahal Alexander, further north, has sea turtles and a shady forest.  And the trail at Holot Nitzanim features some of the best sand dunes around.

But this week, we went looking for a river/sand dune/ beach hike that was a little different from the rest.  Holot Zikim is a short hike, less than 3 kilometers in total, so it’s a perfect trail for a lazy day.  Not only that, but there’s a super quiet lifeguarded beach at the end.  So, you can breathe easy if you want to bring kids along.

This pretty, relaxing hike is near Ashkelon, all the way towards the southern part of Central Israel.  Still, it’s not that far from Jerusalem (it took us a little over an hour to get there).  And the serene atmosphere on the trail makes it worth a visit.

Here’s what we saw on our walk through Holot Zikim:

We started the trail right off the highway, near a path with no signpost save for a blue and white trail marker nailed to an electric pole.  Even though this trail doesn’t appear on any of the maps we had, we knew that if we followed the blue trail markers, we would arrive at a river and then a sandy beach.

We were on our way.  I thought the trail was beautiful.  There was no one there that Friday, and the flowers on the side of the path captured my attention.  I especially enjoyed spotting squill flowers (hatsav in Hebrew) sprouting all over the place, indicating that autumn was on its way.

I may have been taken in by the blossoms, but my husband couldn’t get over the giant smoke stacks of a power plant looming in the distance.  It wasn’t the sort of thing you expect to see on a hike.

I, for one, just wasn’t bothered by it.  To me it added a kind of cool, otherworldly element to an otherwise minimalistic beach path.  And the fact that the trail was completely deserted made up for this manmade imposition.

Down by the River

Before long, we reached the Shikma River, which flows along the trail towards the Mediterranean Sea at the end.  We wandered down to take a look.

Not surprisingly, the first riverbank we stopped at (and the most easily accessible from the highway), had too many empty bottles laying around.  But a little further down, we were able to gaze out at beautiful, still water from a clean river bank.

The trees grew in thick all around the water.  And we liked how we could see the contrast between the river and the bright blue sea that lay just beyond.  Our border collie felt that this was the perfect spot for a swim.

Up to the Sand Dunes

We took the trail slow that day.  As I said, the whole hike was less than three kilometers.  We were in no rush.  There was plenty of time to take in all the sights and sounds around.

There were snails stuck to every tall flower stalk, a great imitation of the tall, white petaled flowers we saw earlier on the trail.  We spotted sonic red dragonflies zooming around by the river.  And we listened to the music of many singing birds that always seem to be found near a body of water.

After a bit of rambling along the trail, we reached a Sycamore Fig tree (Shikma).  From here on in, the trail turned into white sand dunes.  We took off our shoes and plowed through the sand, down towards the beach.

Life Really is a Beach

The beach at Holot Zikim was sandy, clean, and quiet.  In the distance, we could see the power plant and a giant dock that stretched out into the water.  A large ship docked there.

The waves themselves were unusual, at least that day.  They whooshed in and out with a loud sucking sound, then an intense silence at the moment before they crashed down again.

We relaxed in the sand and watched our dog play in the waves.  Another dog walker passed by, and our border collie had a playmate for a few minutes.  But aside from one or two beach joggers, there was no one else around.

It felt very quiet and isolated – even though we could actually see the lifeguard stand in the near distance.  The official beach was less than a five minute walk away.

After sneaking in a long morning at the beach, we gathered up our stuff and set off in search of the estuary, where the river spills into the sea.

Scoping Out the Scene

Strangely enough, there was no estuary!  We found the “end” of the river, about 50 meters up from the ocean.  But the river didn’t spill into the sea.  Instead, it just kind of gathered there, forming a still pool.

The only thing we could think of is that the river just gushes out in the winter time.  We agreed to find out more about Nahal Shikma and set off to return on the road.

On the way back, we passed by an abandoned army base, complete with old tanks and barbed wire.  The whole area felt very remote, like we were visiting an undiscovered and untended gem in the boondocks of Israel.

Soon, we were back at the trailhead and heading home.  The hike at Holot Zikim had been just what we were hoping for: an easygoing and relaxing river to beach hike in a quieter part of the country.

Here’s what you need to know if you’re planning to hike this trail.  Holot Zikim is great for kids – it’s short and easy, close to Central Israel, and you can go swimming in the sea at the end.  Nice, off the beaten track family activity (or low key hike).

Just note that this hike is all the way at the south of the coastal part of Israel.  In times of trouble from Gaza, it may not be the best choice (although I guess the same can be said of any place near Ashkelon).

To hike the trail: follow the blue trail markers when you pull off the road.  They’ll lead you all the way to the ocean.  You’ll pass a big Sycamore Fig tree on the way.

From the beach, you can turn around and go back the way you came.  Or you can take a shortcut by going back on the main road that leads toward the lifeguarded beach.  This road is extremely quiet and not at all annoying to walk on.  You’ll see a deserted army base on the side of the road.

If you like dams and reservoirs, you’ll find one right nearby.  Check it out on Google Maps.  In the summer it is empty and filled with green plants.  In the winter, it is full of water.

Questions?  Tips for fellow hikers?  Let’s hear about it in the comments. 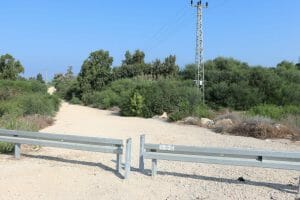 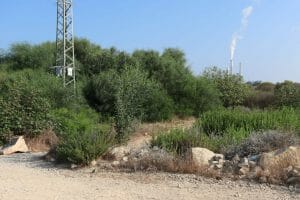 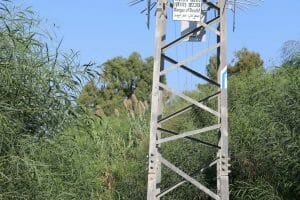 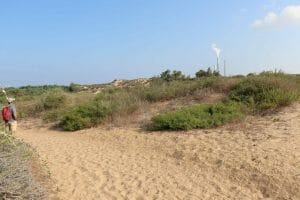 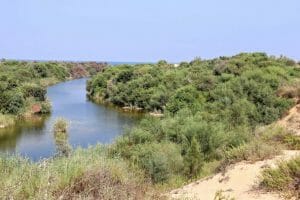 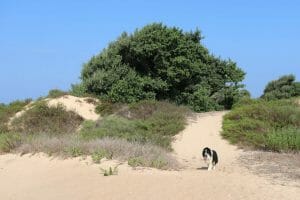 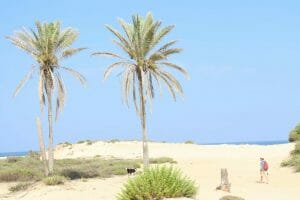 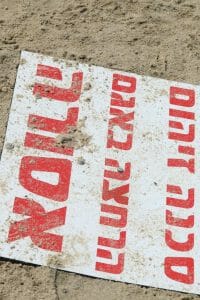 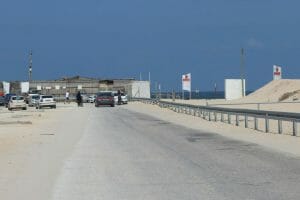 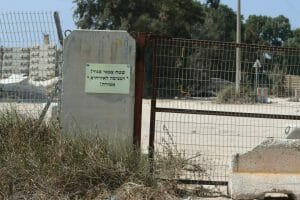 A Waterfall River at Ein Aviel