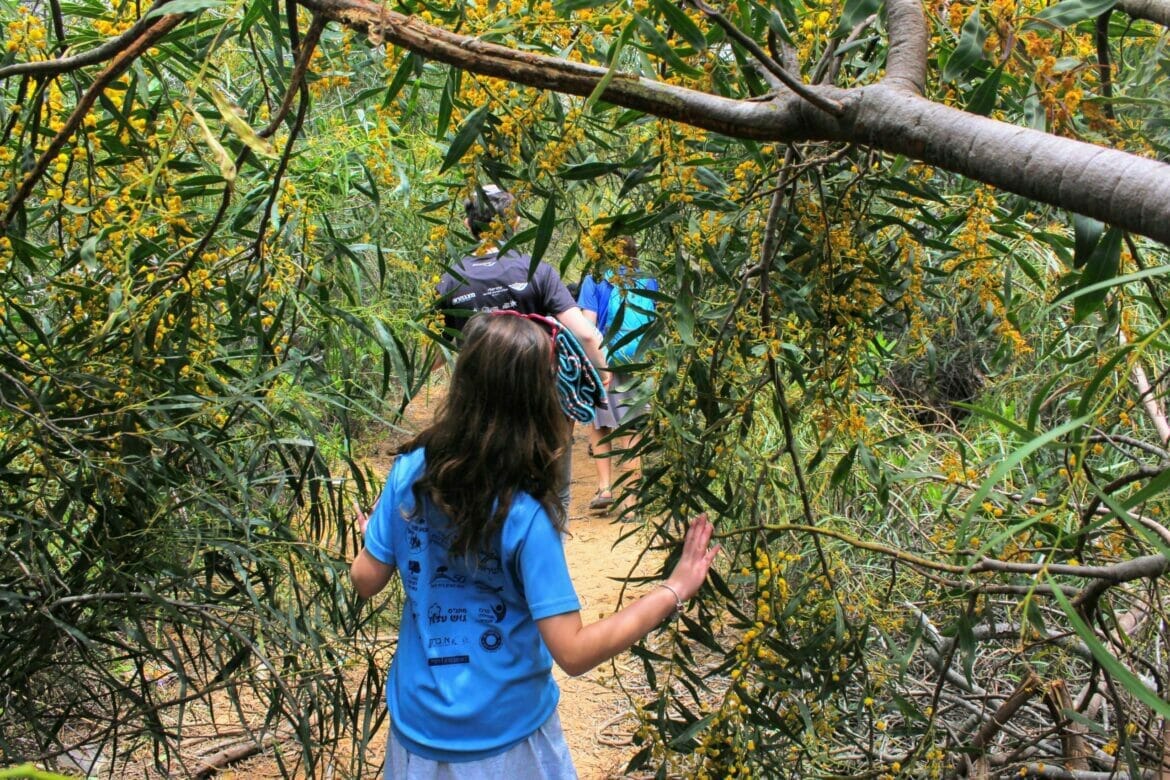 We heard about a lake.

And when we hear about a lake in Israel that’s off the beaten track, we go explore.  So during Pesach vacation, we packed a few backpacks and headed to Holot Nitzanim – the Nitzanim Sand Dunes.

This Nature Reserve includes an accidental lake, incredible dunes, and a pristine beach.

Visiting during a national holiday gave us a chance to see the trail at its most crowded.  And some parts of it were really packed.  But further along on the path, the sand dunes were completely deserted.  And the beach at the end – we had that all to ourselves.

Although it was poorly marked, we enjoyed the hike so much that we decided to come back on a regular day.  So this past Friday we headed back to Holot Nitzanim to see if we could come up with an easy to follow trail to recommend to other hikers.

Here’s what we discovered on our hikes – I’ve put two adventures into one guide:

Is This Lake Sanitary? It Looks Questionable to Me…

Ok, so first of all – the lake.  On our first hike, we followed the red trail right from the parking lot, so that we could get an up close and personal look at the lake that brought us to the area.

Just for a bit of background – the formation of this lake was a complete accident.  Developers were digging when they accidentally hit an underground aquifer.  The resulting freshwater lake was left behind for people to enjoy.

And enjoy it, they do.  The lake itself looked really pretty – there were tall grasses and trees all around, and the water looked clean.  There were a few people in the water, boating, fishing, and just splashing around.

But the surroundings were a disaster.  Garbage was piled up in every possible spot.  And loud music blasted from each group we passed.

It was vacation time.  Lots of people had set up mini camps all along the trail.  Everyone was enjoying the water – and carelessly ruining the environment around it.  I don’t think I’ve ever seen so much garbage piled up along a trail in Israel.

Take Two on the Lake

The second time we hiked, we decided to take the red trail on the other side of the lake.  We hoped that it would be a little less trash filled and a little more like a nature hike.

And we were right.  Since the other side was further from the water, there was no garbage and no partying going on the trail.  Just a clean trail through reeds and trees, with the occasional distant lookout onto the beautiful pool of water below.

On to the Sand Dunes

After a good kilometer of lake side walking, we arrived at the sand dunes that Holot Nitzanim is famous for.  On our first trip with the family, we were pleasantly surprised to find that we were the only ones there (even on Chol Hamoed Pesach).

My kids took turns executing running jumps from the top of the high dunes, knowing that they would land in the soft sand below.  They trudged slowly up the sand hill, then ran down as fast as momentum could carry them.  It was bliss.

The sea gleamed blue in the distance beyond the dunes.  And pockets of deep green grew on some of the sandy hills around.  White birds coasted in the breeze up above. The scene was beautifully serene.

Next, the hike took us along a well-marked blue trail towards the beach.  This part of the trail was still empty, and pretty, and sandy.  As we approached the beach, we were able to hear the waves lapping against the shore.

And then, there we were.  Smooth white sands spread before our eyes.  The only tracks were three toed bird prints.  And the sea was a sparkling shade of aquamarine.

We knew that during the week of Passover, having a beach to ourselves was a novelty we couldn’t take for granted.  Every other beach for miles around was completely full of people.

We dug our feet into the soft white sand and unpacked lunch for the kids.  The beach had no lifeguard – and my kids had come prepared to go into the water.  But at least we were able to have a picnic and play by the shore before heading off to a different beach to swim.

The second time we visited (without the kids), we had no expectations of anything but a quiet beach to ourselves.  So this seaside at the end of the trail was just what we wanted.  The only thing to disturb the noisy silence of the waves crashing against the shore were a few paragliders.  And one old fashioned plane that coasted by right before our eyes.

After spending a long time relaxing on the whitest beach I’ve seen in Israel, we headed back the way we came, back up the sand dunes and towards the lake side trail.

We heard about a lake.

And as it turned out, the lake wasn’t as much of an attraction as we hoped it would be.  But the nearby path, surf-worthy sand dunes, and the beautiful beach at the end made this hike through Holot Nitzanim Reserve one worth taking.

So, how do you best take advantage of this beautiful trail?  For now, don’t take the first red path right next to the lake.  Even when we went back the second time, it was, sadly, littered with way too much garbage to be enjoyable.

Instead, take red path that’s a little higher up on the other side of the lake.  You won’t get to walk lakeside, but you’ll get to enjoy a pretty trail through beautiful scenery. From the parking lot, walk towards Nitzanim Beach and turn right when you see the red path after the booth.

I wish I could give you easy directions to get from the red trail to the sand dunes, but there are really no trail markers at that part of the trail.  And the terrain is such that it’s difficult to give specific directions.  Either use the Google Earth Map, or just turn left at the end of the red trail and climb up and over the sand dunes until you see one worth playing on.

The blue trail runs straight by on the other side of the dunes.  You can follow it directly to the beach.

My kids were totally fine on this hike, but the second time we hiked it I was a bit surprised that they hadn’t complained – the sand dunes are hard climbing, and the path through the sand is not short!

While this is still a family hike (sand dunes – obviously, those are for kids!), keep in mind that it’s not easy walking the whole time.  There will be a bit of trudging through the sand.  It’s not a short walk. And you have to be fine with the possibility of wandering a bit since the trail isn’t well marked.

It was astonishing to find such a beautiful deserted beach in the middle of vacation time in Israel.  The sand dunes too.  This is the place to go if you want a bit of solitude. (Just stay away from the rave scene at the lake).

Have you hiked through Holot Nitzanim? Do you have any questions or suggestions for fellow hikers? Leave them in the comments below! 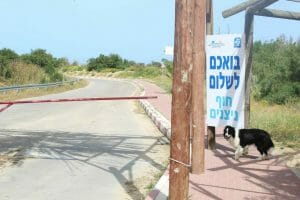 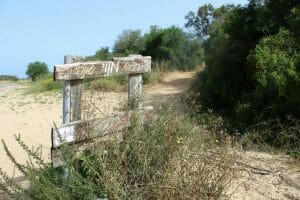 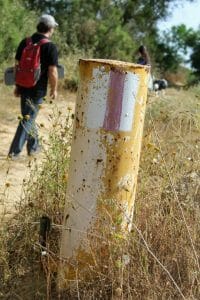 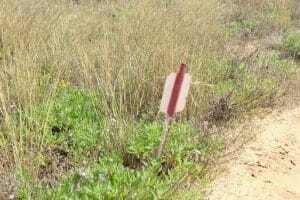 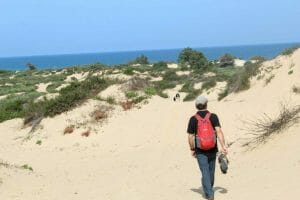 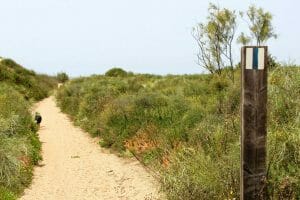 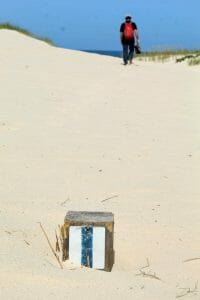