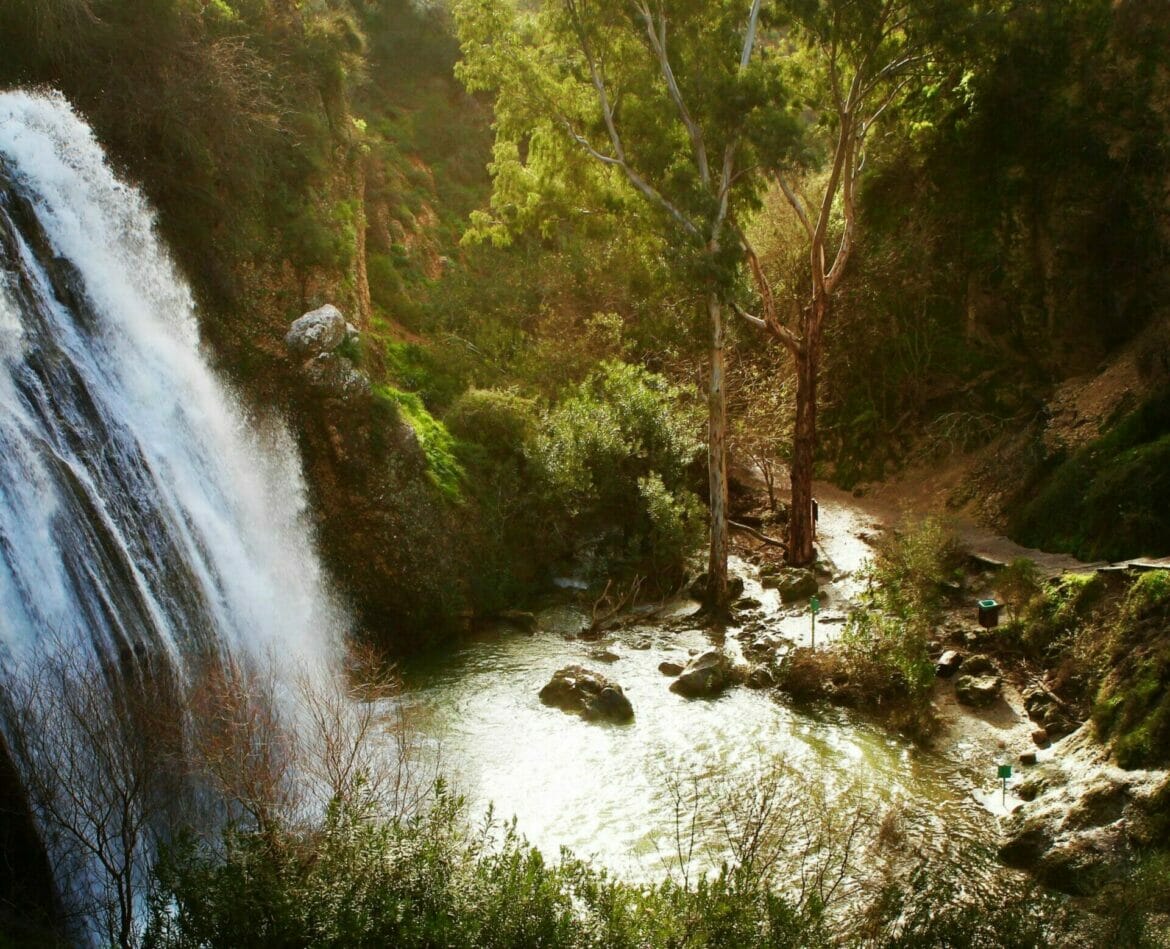 Northern Israel is known for its waterfalls.  Some are more famous than others.

While the Banias is a major hot spot for tourists in the north, Nahal Ayun (only fifteen minutes away) is a less popular place to visit – but no less beautiful.

The Nahal Ayun Nature Reserve is located next to Metulla, a small community right on the border of Lebanon. Ayun is one of the few waterfall parks in the area where you can take a nice hike between three very beautiful falls.  And in the wintertime, the falls are at their best.

Here’s what we saw on last week’s hike through Nahal Ayun Nature Reserve:

The First of Many Falls

We started by driving through Metulla, to park near a little booth at the Upper Parking Lot.  Right away, we headed down a set of stone steps towards the first of the three falls, the Ayun Waterfall.

This was a small gushing fall that poured down into a blue-green pool.  Up above, we could see Southern Lebanon, its flag blowing atop a hill in the distance.  We knew that there were more and better views up ahead, so we continued on the blue path next to the Ayun Stream.

The Nahal Ayun Nature Reserve itself was far less crowded than other waterfalls we had visited up North.  When we went, there was almost nobody there.

The trail itself wasn’t as beautiful as the one at the Banias.  It was more wild and haphazard. But it was still quite pretty, and nothing beats walking along a stream with no sound save for quiet conversation.

We continued over a bridge and through the trees until we got to a wide-open stretch of land.  At the end was another set of stone steps heading down to the second waterfall.

Mist at the Mill Fall and a Magical Rainbow

The view towards the Tahana Waterfall was incredible.  As we walked down the steps, we had to stop multiple times to take pictures.  We just knew that they wouldn’t come out as spectacular as the actual scene in front of us, but we had to try anyway.

The noise was deafening.  Tahana Fall (so named because of an old flour mill which was once powered by the falls) poured down in a steady stream of white into a huge bubbling pool.  Past the falls, the water continued to run through shrubbery and trees, a semi-hidden stream in the underbrush.

Around the bottom of the waterfall, mist rose gently from the effervescent pool, forming a fleeting rainbow.  It came in and out of existence with the rising foam.

What made the scene so incredible was the area’s surroundings.  The waterfall wasn’t sectioned off or pouring through a rocky crag towards a viewing platform down below.  Instead, the setting felt very natural, water spilling in a great gush down towards the trees.  We stepped out onto flat rocks in the pool to get a closer look.

Walking Along the River

Soon after, we continued on the trail, which led through green scenery.  We walked past walls of rock, climbing with a mix of moss, ivy, and flowering vines.  And we ducked our heads under tree tunnels.

Ayun Stream led us the whole way through the path, forming impromptu rapids in some places where a mixture of rocks and tree roots broke up the river.

Soon we reached Eshed Waterfall, a mini fall ahead of a bridge which leads to a beautiful lookout.

From this lookout, we could see two tall cliffs facing each other in the distance.  Green filled the valley, forming waves of shrubbery between the gray mottled rocks.   A lone tree grew right in the center, and beyond sat rolling green hills.

Past this spot, the scenery changed again, up a hill to flatland full of Hatzavim, which are called squill plants in English.  There were lots of beautiful yellow wildflowers growing in between, and I wondered what the whole scene would look like when the Hatzavim were in full bloom in spring, with tall purplish white flowers popping up towards the sky.

Finally, we reached the last lookout point, a half circle wooden deck up above the Tanur Waterfall.

We could see part of the falls down below, but the most beautiful view was out to the rolling hills in the distance, some green and wild, some planted with neat rows of grapevines.

The Force of Tanur Falls

Next stop: the main attraction at Tanur Waterfall.  This is the part of the park that gets the most visitors.  It even has a separate parking area for those who don’t want to walk the whole way through the Reserve.

We climbed down a lot of steps toward the waterfall.  We could hear the force of the water crashing down from way up above.  As we descended, we saw other people heading in the same direction from the Lower Parking Lot.

The Tanur Falls area is well maintained.  It’s full of beautiful greenery, with a neat asphalt path and flagstones lining the sides.  Trees and moss are all over the place.  The wide path leads up towards wooden steps and the main viewing area of Tanur Waterfall.

Because it was wintertime when we went, the Tanur Waterfall was at its best.  It poured down from a narrow stream up above and ballooned out into a large fall before crashing into the pool at the bottom.  We could taste and smell the water in the air, even before we were on the main deck.

Up top, there was no staying dry if we wanted to get close. I know it’s a funny comparison, but I was reminded of our time on Maid of the Mist in Niagra Falls.  If we got too close to Tanur Falls, we were going to get wet.

We skirted our way around the major soak zones as best we could to get a good view. There were a few other people on the platform, but it wasn’t a boisterous tourist scene.  People were mostly silent – there was no use in talking.  The noise of the falls drowned out every sound around.

After seeing Tanur Waterfall, it was back up a long set of steps to return the way we came.  Somehow, it never bores us to go over the same scenery twice.  There’s always an opportunity to see the sights from a fresh perspective.

Thirty minutes later, we were at the trailhead again.  We had seen the Lebanese border, three waterfalls (and one mini one) and experienced an amazing hike through wildflower filled riverside scenery.

In this country, there’s a lot more than just the big-name sites to explore.  After fifteen years of living here, we were long overdue to discover the lesser known beauty of Nahal Ayun.

Re: location. Nahal Ayun is in the Upper Galilee in the “Etzba HaGalil.” This is a small sliver of land west of the Golan. So if you’re in the Northern Golan or the Northern Galil, this Nature Reserve will be close by.

There are a lot of stairs if you are hiking the whole way through. If you go only one way (from Upper Parking to Lower Parking), there isn’t much uphill, but you will need a car to wait for you at the other side. I didn’t find that the uphill on the return was particularly daunting, and I would definitely bring my kids on a two way hike here. Just keep the stairs in mind when you’re planning. Total ascent listed in the table above.

Don’t forget to read my guide on the navigational features in these posts before you go.

Questions? Tips for fellow travelers? Leave them in the comments section below! 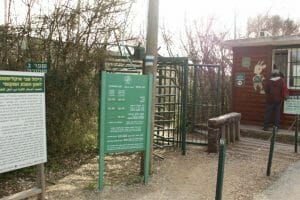 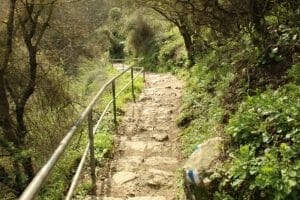 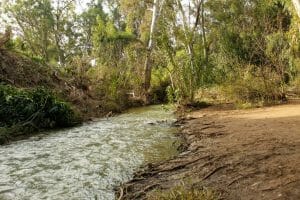 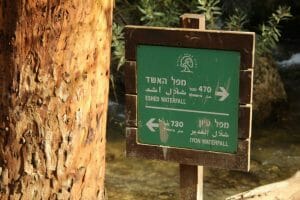 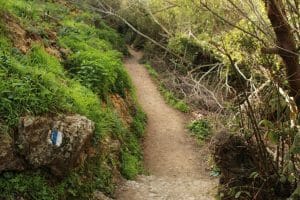 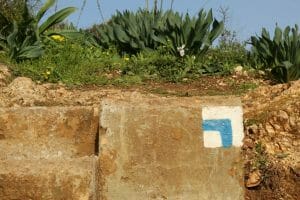 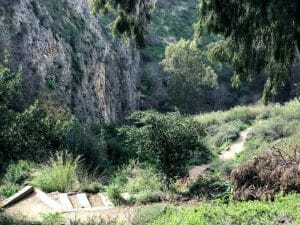 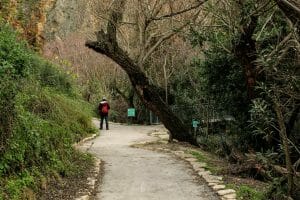