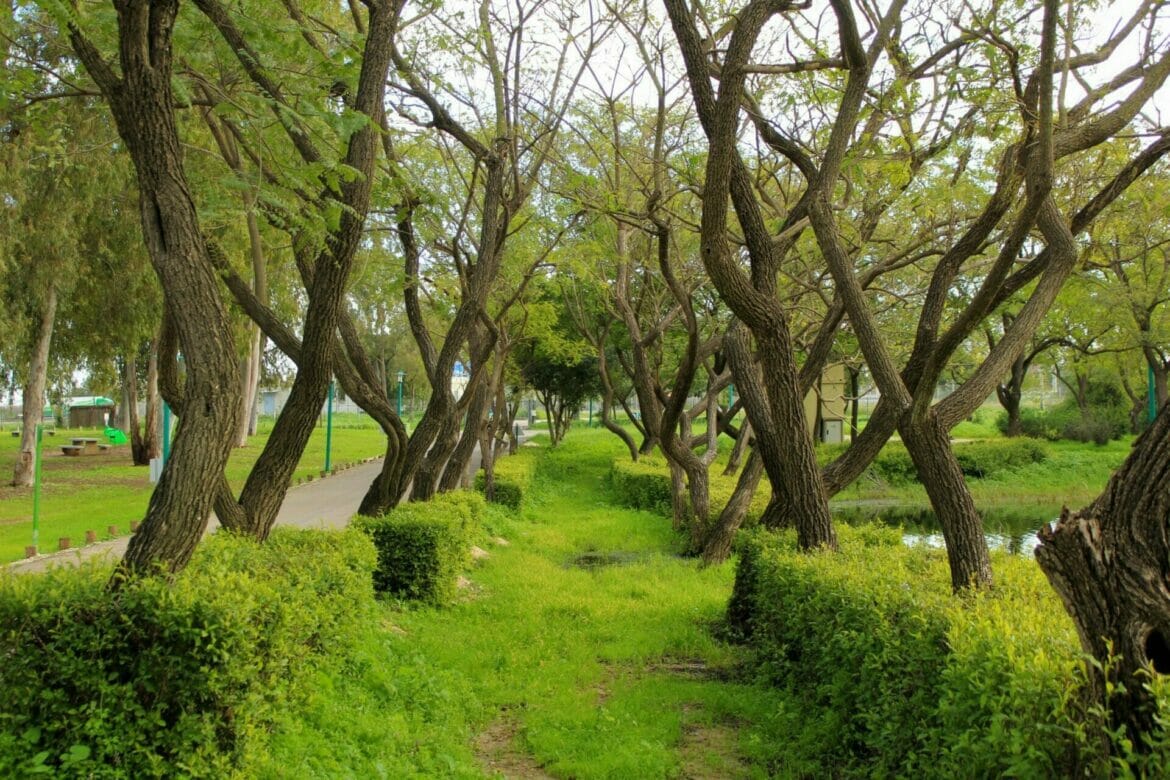 You don’t have to travel far to walk along a river when you’re in Israel.

It’s more a matter of locating these quiet little streams.  There are rivers up north and down south.  Near Jerusalem and Tel Aviv.

For last week’s hike, we decided to combine two park walks into one, to get a glimpse of the Upper Yarkon River and surrounding lakes and streams in two places. We planned to start at Tel Afek, right near the community of Rosh Haayin and close to Petah Tikva.

Our idea was to take a quick tour through Afek, then follow the waterside path down to another park nearby: Mekorot Hayarkon.  There, we would see the surrounding sights before turning around to retrace our steps.

It turned out to be a great walk, full of lots of natural beauty, charming old structures, and a few surprises.  And we later realized that both sites were part of the same greater Yarkon National Park.

Here’s what we saw on our river walk through this beautiful park in Central Israel:

Ponds, Pathways, and a Crumbling Fortress

We started the hike at the Afek side of Yarkon National Park.  After showing our National Parks card at the entrance, we parked and walked towards a beautiful path near the side of a “Winter Pool”.  That’s fancy talk for a pretty pond with water birds that’s only around in the wintertime.  We followed the tree lined path before crossing through the grass and over a little stream.

Here, we made a left in pursuit of “Shvil Hahatzavim.”  This trail is a small dirt path, lined with short green plants.  It wasn’t marked on the map, but big friendly signs complete with the National Parks mascot (a mountain goat) showed us the way.

We followed the trail out into the fields and towards Tel Afek itself.  The area was really quite pretty – short reeds and plants popped up from the earth against a puffy cloud filled blue sky.

After a little stroll, we reached a cluster of old buildings.  These were originally used by the British to control the channeling of water from the Yarkon River to Jerusalem.  Now, they belong to the Parks Authority – and they’ve dressed them up with Israeli flags and cut out figures in the archways.

We continued along over the “Tel” and past ancient ruins.  The little hill we were walking over was a mountain of history, built on top of ruins of thousands of years.  In the distance, we could see a more recent addition to Afek – a well preserved old fortress.

As we passed by, we noticed how this picturesque structure sat upon one of the greenest and grassiest patches of earth I’ve ever seen in the area.  It looked like a crumbling castle in Europe.

From a Pristine Lake to the River’s Source

After the ruins, we followed the path back towards the main lake of Afek National Park.  The water was a bright blue-green, reflecting the trees all around and a perfect sky.  There were water birds, flat stones, and a wooden platform to sit on.

It was so beautiful that we thought about stopping right there to have coffee.  But we decided to wait until we were a bit further off the beaten track.

So we kept on going towards a small gate that exited the park.  We had been assured earlier by a Parks worker that we could walk the 2 km path from here to Mekorot Hayarkon.  But within a minute of exiting through the gate, our path was blocked by a fallen tree!

There was nothing to do but go around – so we climbed up the side of the hill, around the tree, and back onto the path.

The trail continued through tall grasses and reeds, along a flowing stream.  We could see and hear different types of birds from every direction.  Winter flowers sprouted up from between the reeds.  Before long, we arrived at the gate to Mekorot Hayarkon and walked on through.

There were a few places to explore before we got to the main area of Mekorot Hayarkon Park.  We passed by the first one (a little turn off to the left that takes you down to the water), but we made sure to stop at the second.

The Lily Pad Pool was quiet and beautiful.  In the center of the area, a single tall tree with a giant trunk stood surrounded by water.  Lily pads filled the pond, stretching out into the distance.  And cane grew up from all sides.

It seemed like the perfect place to stop and meditate on nature’s beauty.  It was serene and quiet.  Since the pond is separate from the main part of the park, it requires effort to get to – so there was no one there.

We sat on flat rocks around the pool and enjoyed the silence.

After that, we were on our way again, past the train track bridge (a great place to watch the old-fashioned trains which sometimes go by) and over a wooden walkway towards the park.

We followed the path alongside the park fence, with the noise of a stream gurgling merrily next to us.  Soon we reached the back entrance to the park.

Mekorot Hayarkon is a large and beautiful island of green in the midst of urban sprawl.  It holds the actual source of the Yarkon River – underground aquifers that bubble up from the ground and pour down a waterfall to the riverbed below.

There are birds everywhere.  Tall trees.  And, of course, the classic picnic benches and playgrounds.  But it’s especially beautiful – not what you’d expect from a park near the city.

We walked through the grass towards the main area, passing a large pool of catfish on our right.  There’s a wooden walkway here, and a place to sit and watch these underwater beasts in action.  Throw a crumb and they all come storming to the surface, a mound of slimy bodies and gaping mouths forming one unit.

We continued past the pond towards the entrance to the park.  Here, the continuation of the train track creates a neat border.  A new train chugs by every so often, against the flat plains beyond the tracks.

From there, we wandered all over the place.  We saw the fig house – an old structure with a fig tree growing right in the center.  And we wandered down the “Romantic Trail”, a dead-end path framed by pink paper-thin bougainvillea blossoms the whole way through.

After a thorough exploration, we left the park and headed back the way we came, down the path towards Afek.  The birdsong seemed the most beautiful at this point – they gathered near the river.  And the sky seemed the brightest blue.  Our surroundings were green and lush, especially rich under a cloud dotted sky.

Where there’s water, there’s often beauty.  Yarkon National Park is one of the few places in Central Israel where you can walk along an unspoiled river and see all of the incredible nature that comes with it.

Totally worth a visit to this place if you are in Central Israel!  It’s a nice way to get away from the hustle and bustle of the city into a green and thriving part of nature.  Either of these parks would be fun to visit on their own.  Or combine the two like we did and explore several sights at once.

Since it’s a National Park, there are facilities and maps on site. The entrance fee to one site covers the entrance fee at the other – just keep your receipt.

This hike is great for kids because there’s a lot to see and do the whole way through.  And since it’s a one way hike, you can turn back whenever your kids have had enough.

Note: The Upper Yarkon River is a the only part of the river where you can see this type of unspoiled scenery. The middle part of the Yarkon is mostly made up of wastewater, and the lower part is mixed with saltwater rushing back from the ocean.

Warning:  Don’t try to walk the path between the parks in the days following a heavy rainstorm!  It is much too muddy to be enjoyable.  Wait until a few dry days have passed, and you’ll be much better off.

Both of the parks are popular places to visit, even more so in the warm weather.  The trail between the two parks was pretty quiet, though.  Since there’s no shade on this trail, it’s perfect for hiking in cool weather.

Following the path in these parks is a little tricky. Since the trails are small park trails, they aren’t all visible on any map. I marked up the National Park Brochure as best as I could. Follow the Google Earth map for the easiest way to stay on track. You can always ask a park worker for directions.

Questions? Any info to share? Leave it in the comments below! 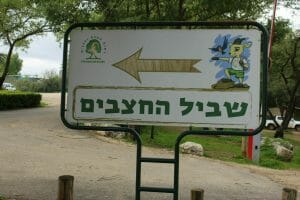 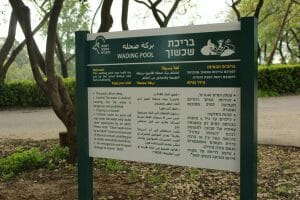 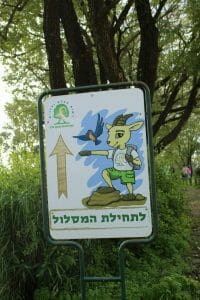 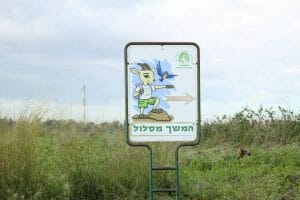 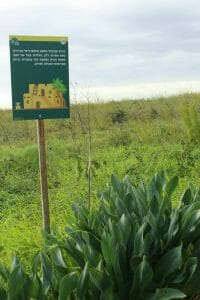 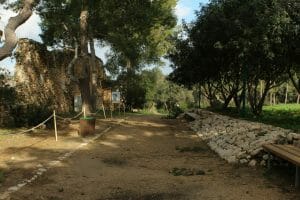 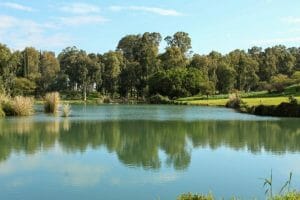 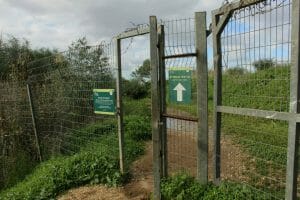 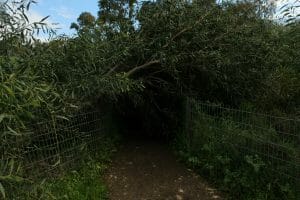 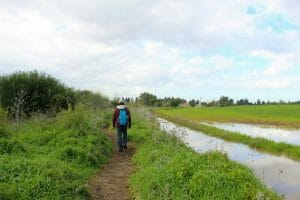 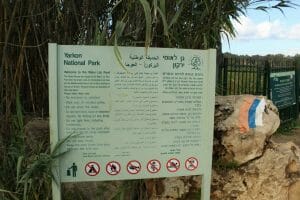 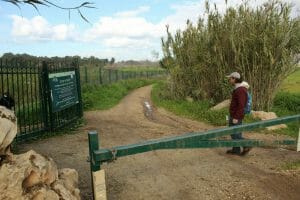 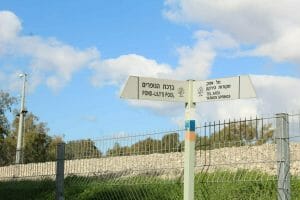 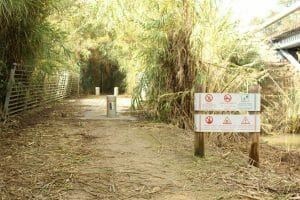 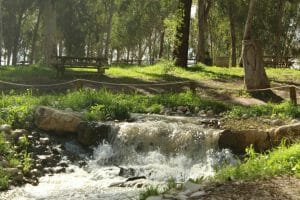 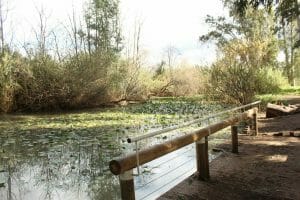 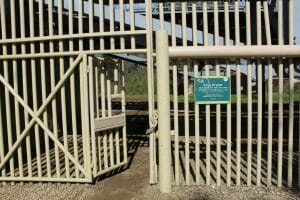 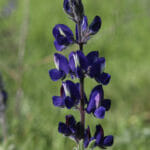