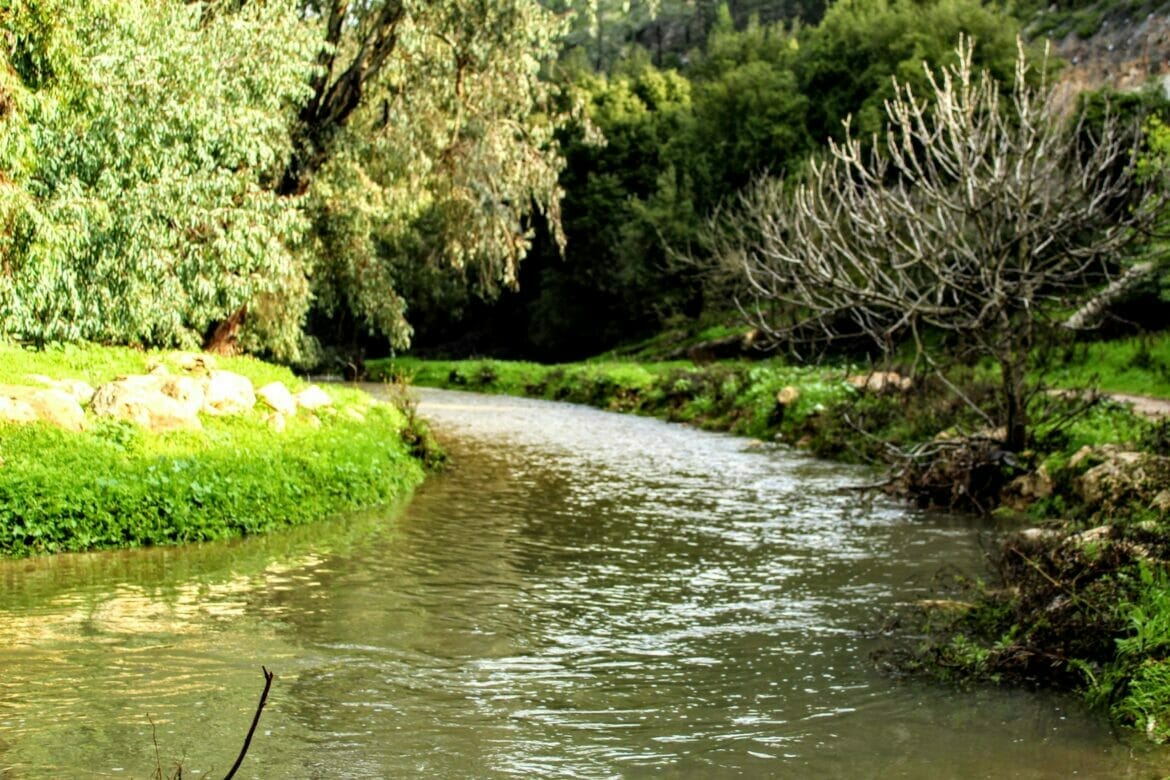 I promised myself that this winter, I’d walk along a river that only flows in the rainy season.  So this past Friday, when we woke up to pouring rain, I forced myself to get all bundled up and head out on a hike nearby.

Nahal Refaim is a river right near our home – only about fifteen minutes away.  But somehow, we had never actually seen it in all the years we’ve lived here.  We weren’t sure what it would look like – would it be a little trickle running through some rocks?  Would it be pretty?  Or would it be completely dried up like so many riverbeds in Israel?

We made a backup plan.  If it was too rainy as we walked, we would just take a short 1 kilometer hike down to the river at Kobi Bridge, then turn around and go back (and head out for breakfast at Pat Bamelach in Efrat- yum.)  So we packed up our bags and were off to see Nahal Refaim.

Turns out that not only was Nahal Refaim an incredible surprise, but the hike itself and the weather that day surprised us too.   Needless to say, we never made it to breakfast at Pat Bamelach.

Here’s what we did instead:

The Benefits of Being Abnormal

The trail starts in Begin Park, right next to Ein Kobi.  This is the same place we parked for the Kobi Ruins walk.  From here, we took the red trail down into the rocks and trees.

Within a few minutes, we were warm and toasty.  The rain had subsided to a faint drizzle, and the cloudy sky turned everything around us to a rich, saturated, green color.  The moss and clover grew thick on stones on the trail.  And we splashed through the puddles under a close canopy of oak trees.

Although we knew it would happen, it was a little bit funny all over again to see how nice it felt outdoors after being cooped inside.  The weather was really bad that Friday (at least at home in Gush Etzion).  Nobody normal would have dreamed of venturing on an outdoor excursion on a day like that.  But here we were. And it was so much better than spending another day inside, watching the rain drip down through the window.

Climbing Through a Secret Tunnel

We continued down the rocks and through the trees until we reached the first crossroads – a paved asphalt path which crossed right through our trail.  At this point we crossed the road and followed our path onto the Israel Trail -also marked green, yellow, green.

This part of the trail was similar to the first part, only steeper.  We carefully made our way down the boulder path, passing by reflective puddles, piles of leaves, and a patch of little brown mushrooms growing between the rocks.  It wasn’t cold there, and it wasn’t particularly rainy.  It was just a secret little tunnel through the trees where we knew we wouldn’t meet another soul.

Down, down we hiked until we hit another crossroad.  At this asphalt road we made a right onto the green trail.

From here it wasn’t much further.  Before long, we could see a big Jerusalem stone bridge in front of us and hear the sounds of a river coming from that direction.  As we approached, Nahal Refaim revealed itself through the archway.

It was like nothing we ever imagined we’d see so close to home.

A Rainy Season River and Waterfall

The stream poured down a whitewater fall right before our eyes.  On each side, the roaring river stretched further than the eye could see.  The banks were green and covered with grass and wildflowers.  Eucalyptus trees grew tall on the river’s path.

This was a real river – but formed completely by rainwater.  All of the runoff from flash floods and little rivulets came together to create this sizeable force of nature  There was even a low “bridge” in the middle.  It was underwater, and we dared not try to cross for fear of being swept away by the oncoming current.

After taking in the majesty of the waterfall, we decided to walk up the path along the Nahal Refaim for a little while.  The weather had definitely improved, and it now seemed like the perfect day for a hike – cool and comfortable.   We walked for a long time, just enjoying the novelty of a hike along a river.

At some point, we decided to turn around.  Next to the bridge we had noticed the perfect flat rocks for sitting.  We headed back and broke out our thermos full of coffee (which had of course been deemed a necessity, even if it had been only a two kilometer walk.)

Fifteen minutes later we were on the move again, this time to explore the river in the other direction.  It wasn’t long before we reached the end of the path.

Actually, both at this point and near Kobi bridge, the path continued over a bridge on the other side of Nahal Refaim.  But the bridges were flooded. Those paths are unreachable by foot when the river is flowing strong in the wintertime.

It was time to head back to Kobi Bridge and continue our hike back in the direction of the trailhead.

For the hike back, we decided to take a different, longer path.  The green trail travels in a much more circuitous route, but we figured it would be nice to change things up a little bit. So we followed it.

We wandered along the road, weaving back and forth up the mountain.  It started to rain again, but the drizzle only kept us cool as we ascended.  There were beautiful views alongside the trail.  We could see the river, and the train tracks winding through the forest below.

We took this green trail all the way back, once more passing the trail we took coming down.  On our way, we saw a mountainside full of almond trees in bloom.  And a short shrub still showing its fall color which partially blocked the view of the white blossoms.  The hills were green and lush in the rainy drizzle.  The contrast of the scene was mesmerizing.

A little bit further and we were back at the trailhead.  Our two kilometer walk had turned into a seven kilometer trek.  Our chance to go out for breakfast was long gone.  But we had no regrets.

So whether you make this a short hike to the river and back (a little over two kilometers) or turn it into a nice long seven kilometer outing – please go visit this river during the rainy season! You won’t believe that this beautiful body of water is so close to Jerusalem, Beit Shemesh, and Gush Etzion.

Just make sure to go a day or two after a good rain (or while it’s raining). If too much time has passed since the last rainfall, there won’t be a river to see. It’s still a beautiful walk, though!

You could easily take this walk with kids. I would recommend just doing the two kilometer there and back with little ones. Just remember that it is downhill and then a significant climb back up. The total ascent was 200 meters! But it’s a fun hike with good rock scrambling and lots of things to see.

If you want to make it stroller friendly, you could probably do that too (as long as you have a jogging stroller). Just park in the same place and take the green trail there and back instead of hiking on the red trail/Israel Trail. It’s a less interesting walk (and a bit longer), but the road is mostly even (again, there’s still a 200 meter ascent back up.) You could also drive down – with a 4×4 or a good car.

Disclaimer: Hiking on wet rocks can be slippery. Be careful while you climb!

You can use the Google Earth file in the table up top to follow your path on the trail. And here’s your handy dandy printable marked up trail map:

It should be super easy to follow the path we took, or make up your own using the instructions above. The path going down to the bridge is bright yellow on the map, but at the site it is marked red until the first intersection (green) and Israel Trail for the rest of it. Map courtesy of Amud Anan.

Another note: After you park at the Ein Kobi lot you may not see where the trail begins. Go past the old building and picnic benches. There is a signpost with a red trailmarker marked Nahal Kobi. Picture in the gallery below. Follow that trailmarker downhill!

Gear, gear gear! I can’t say enough about how the right gear enhances your hikes during rainy season. Try these boots, these pants, and this rain jacket. Our rain jackets fold up easily into our backpacks, and can be thrown over a heavier jacket. Here’s a good pair of pants and a rain jacket for men. And make sure to fill up a thermos with something hot.

Questions? Have you hiked along a rainy season river? Or do you have the latest scoop on water levels at Refaim? I’d love to hear about it in the comments below! 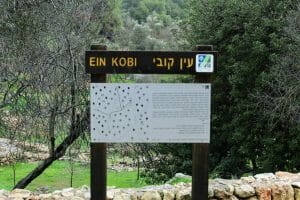 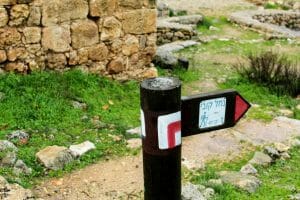 Follow the red trail down to Nahal Kobi (Nahal Refaim). 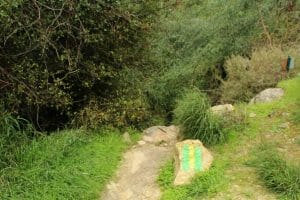 After crossing over the road take the Israel Trail. 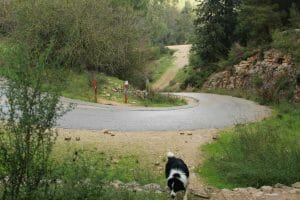 At the next road follow the green trail down to the bridge. 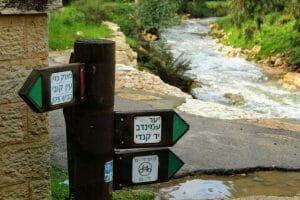 The trailhead under Kobi Bridge at the river. 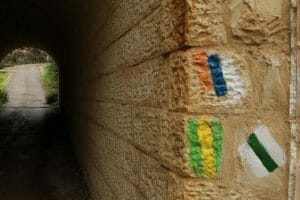 After enjoying the river, turn around and follow the green trail back. 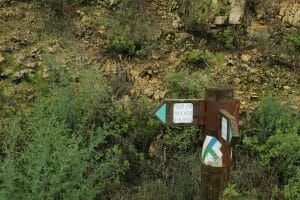 Follow the green trail back up to Ein Kobi. 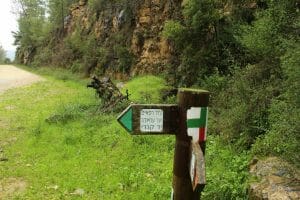