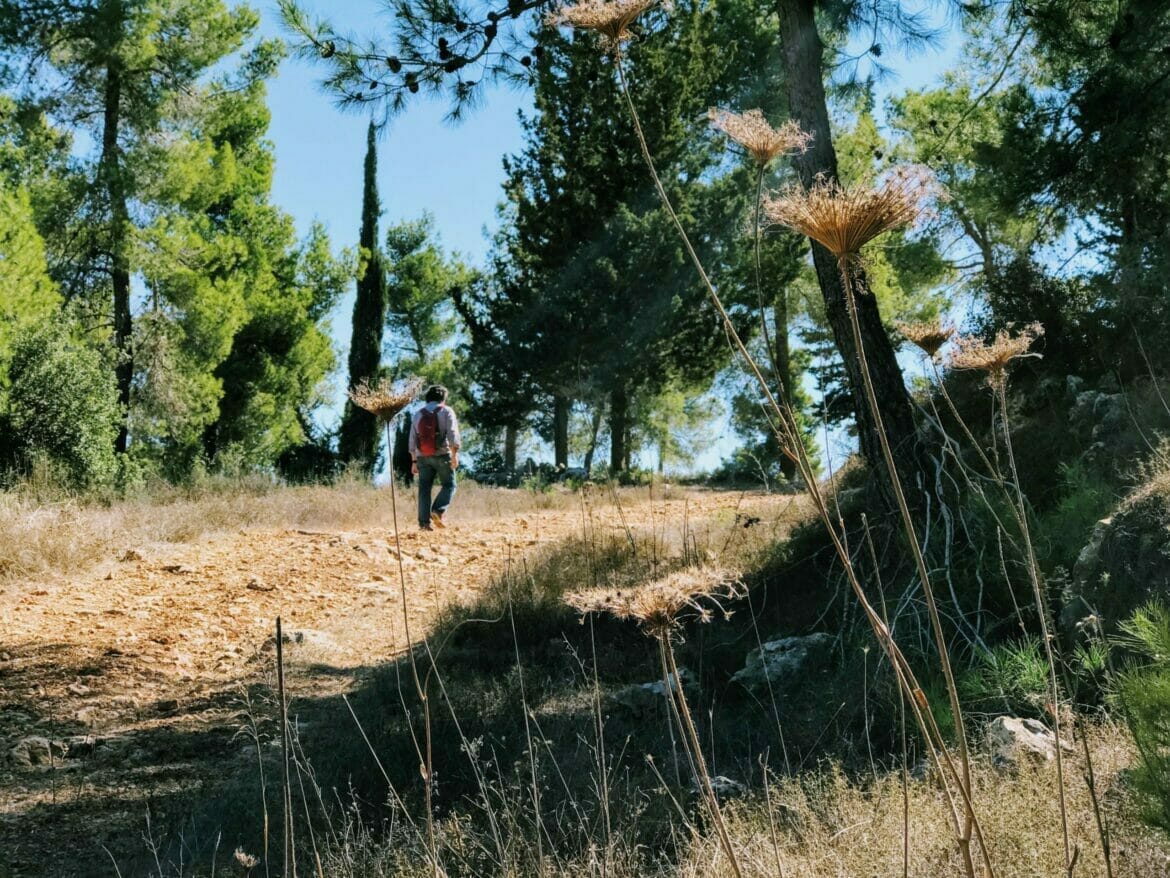 Last week, when I took my family to Ein Kobi in Begin Park, I was intrigued.  Along the path we walked on were so many quiet, little trails leading up into the trees.  I wanted to go back and see where each one led to.

So rather than sit around and eat an Israeli breakfast, this Friday we headed on back to Begin Park, only fifteen minutes from Gush Etzion and not much further from Bet Shemesh and Jerusalem.  We had done some research and pieced together a relatively short (5 km) circular trail that would take us through the woods and back.  The path started at the Nighttime Parking right next to Ein Kobi.

We went into our hike not knowing what we would find.  Would there be other hikers?  Trail markers?  Would it be a walk worth sharing?

Here’s the scoop on this nameless trail.  I’m going to call it the Kobi Ruins trail.

At the beginning, the path led through a pretty forest and up over the side of a mountain.  There were some cool views into the valleys below.  The road was wide and empty, but there were ATV tracks in the dirt and other signs that people do in fact use this trail.

After walking less than a kilometer, we reached three giant boulders blocking the path.  This is the place that hikers and drivers part ways – no vehicles can get past beyond this point.  We walked on through.

The most striking thing about the Kobi Ruins trail was the sweet and woodsy smell of pine. It smelled like camp.   The whole area was full of pine trees.  Well established ones, but also young ones, not much taller than us and intensely bright green.

We continued along the path until we reached our first trail marker – a blue marked trail that led to the right.   Since we knew that this was the way to get to Kobi Ruins, we took the path.

And then the path took us – towards the most magical place.

As we passed through pine forests of brilliant green, we reached a slope to our right.  On that little hill sat the ancient village of Kobi – the many evenly cut stones popping up from the ground showed us we were there.

The area was completely quiet, except for the soothing sound of wind rustling through the pine trees. Under our feet, old stones popped up from the mountain, once part of homes and other structures.  And growing between the rocks were tall wildflowers on a blanket of pine needles.  We sat down in a large flat clearing, one that had obviously been used by other people before us.  There was a stone circle with the remnants of an old bonfire.

It felt like we could sit in that one spot for hours.

We talked about what was underneath us.  What were all of these stones once a part of?  Most likely, they were left over from the most recent inhabitants of Kobi – Arabs who lived in a village there before 1948.  But records show that Kobi was also a Jewish settlement in the Mishnaic era, so those remains were here somewhere as well.

After relaxing in the shade and listening to the wind whisper through the trees for long time, we picked up and went on our way once more.  We could continue straight on this blue path and head back to the parking lot, but we had our hearts set on a longer hike.  So we doubled back the way we came to return to the original trail.

It’s hard to explain what was so spectacular about this journey.  The trail wasn’t well marked, we didn’t reach any bubbling brooks or waterfalls, and there was really never any huge climax of any kind.  It was more like walking in ever peaceful woods.  The trees towering over a rusty red dirt path.  No one else around.  Like getting lost in a secret forest (incredibly, so close to home.)

We continued to follow the trail straight until the fork in the road.  Here, we could have turned right for a short walk back to the car.  But we weren’t ready to give up this little piece of paradise yet, so we went in the other direction.

After another kilometer of ambling through the trees and breathing in the pine scented air, we were back on the main road of Begin Park to EinKobi.

Somehow, we are amazed all over again every time we find another expanse of natural beauty so close to home.  After fifteen years of living here, Israel still holds endless and wonderful surprises.

Turns out that yes, this hike was definitely one worth sharing.  It really is true.  Just like national parks all over the world – Israel has quiet and beautiful forest hikes to lose yourself in.

But so you don’t actually get lost,  download  the Google Earth kmz file and follow our path through the forest – it isn’t well marked.  If you just want to take a three kilometer walk instead, you should be able to follow the directions above without Google Earth.  Just make a right turn at the fork in the road (the first one after you get back on the main road from Kobi Ruins) rather than extending the hike.

Questions or Comments?  Please leave them below! 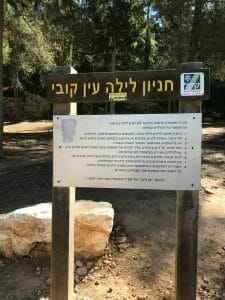 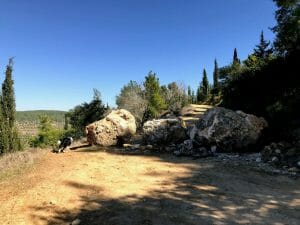 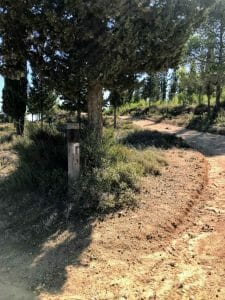 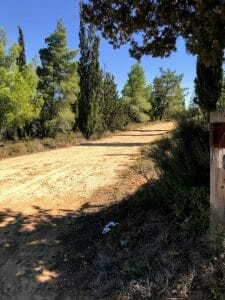 Double back and continue on the first path. 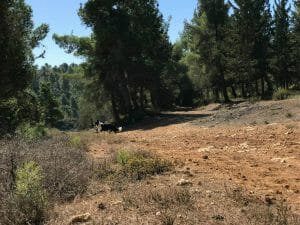 Right at the fork in the path.