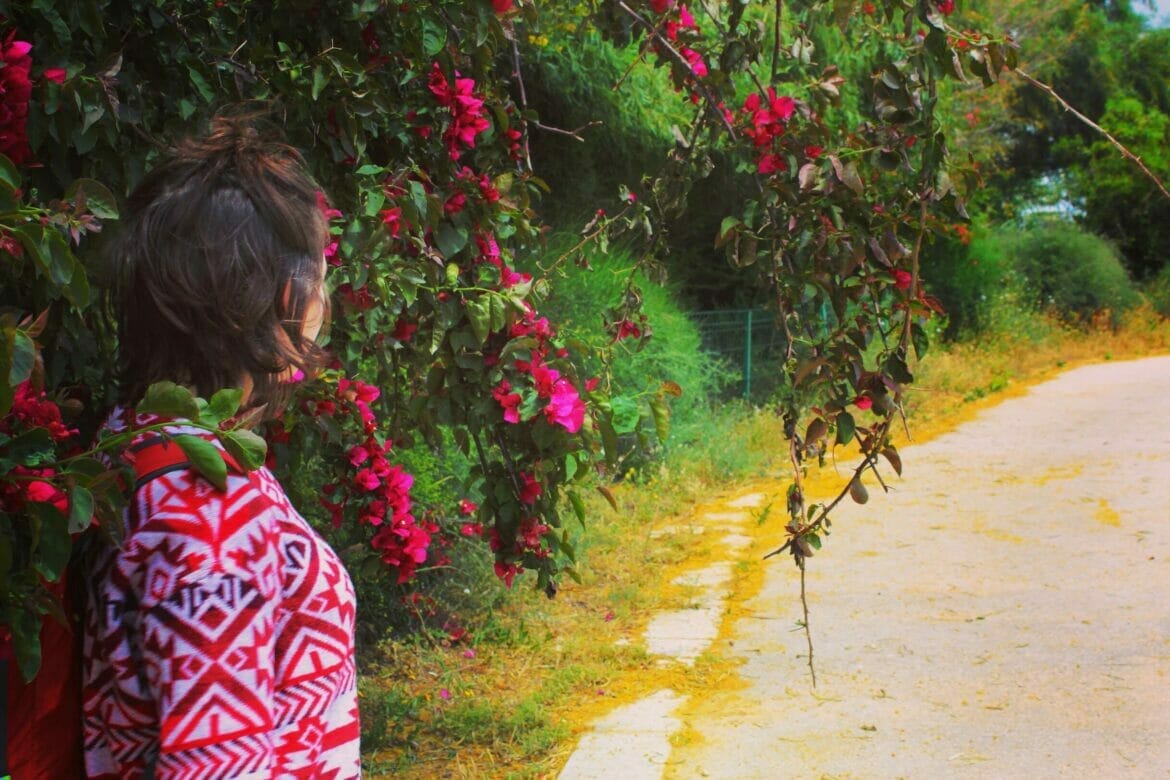 This past Sunday morning, when we woke up to 45 degrees and hail in mid-April, we were a bit bewildered.  It was the second day of Passover, and all of the kids were home.  There was no question that we were getting out that day.

But where do you go with six children when it’s cold and rainy?

As we browsed through the weather reports around the country, we found much the same all over Israel.  In some places, the forecast was for slightly warmer temperatures, but rain was predicted throughout the day.

Except for Ashdod.  For some reason, the predicted chance for rain in Ashdod was low, and the high temperature was in the mid-sixties.  And fortunately, I had a reader recommended hike in Ashdod tucked away for a rainy day (thanks, Sara!).

So, my family, along with all of our Israeli siblings/cousins headed to Nahal Lachish.  This walk along a river was said to include fish to feed, animals along the way, and a beautiful beach at the end.  And the fact that it was stroller friendly made it the perfect choice for our group which included one double stroller.

The weather forecast didn’t play out as promised, and the walk along Nahal Lachish couldn’t exactly be called a hike.  But it turned out to be the perfect way to get outdoors and experience nature with a huge group of kids on a cool and rain threatening day.

Here’s the lowdown on Nahal Lachish, and all of its unexpected surprises along the way:

As we set out on our hike, five adults and twelve children between us, we were amazed by the weather.  Like I said, back home it was freezing and hailing.  In Ashdod, the weather was much warmer, and the sun was starting to shine.  It seemed we had chosen our destination well.

We walked past the bathrooms near the parking lot and onto the paved pathway.  The Lachish river was straight in front of us, beyond a grassy riverbank.  We started our walk by turning right, in the opposite direction of the beach.

The scenery around was very pretty.  Bougainvillea and mimosa flowers poured down around the sides of the path.  And puffy white dandelion blossoms peeped out all over the place.

We passed by some interesting sculptures and a stone carved throne (which all the kids piled onto).  And then we saw the animals.

It’s a Total Zoo Out Here

So, this is where the hike became a cross between a nature walk and a zoo.  On one side of the (free) walking path was a grassy knoll and a river.  On the other were caged animals, ranging from zebra to antelope.

I had known in advance that there was some sort of animal situation along this trail, but somehow, I didn’t expect this quantity or setup.  Of course, the animals proved to be great entertainment for our children.  The cages were spaced gradually along the path, so that we could walk for a bit, then stop for a bit.

Then at one point, between the zebra and the ibex, the sky became overcast, and it just started hailing.  We threw on our rain jackets and huddled together under a gazebo near the zebra cage (which now that I think about it, was pretty convenient), and waited for the fleeting storm to pass.

Life is a Playground

It took about five minutes, but soon, the sky was clear again.  We continued along down the river past more and more animals until we came to a really fun looking playground.

Some of our kids had been begging for lunch, so a park stop was in order.  The children dispersed onto the well- tended playground equipment.  And then it started to rain again.

This time, there was no gazebo.  But there was a spacious playground fort!  (And we were the only ones there.) We lined up in the fort and gave out lunch to whoever was hungry, waiting for the rain to move on to somewhere else again.

Soon the sun was shining, and we ventured back out to the park bench.  The kids played for a long time before we continued on the rest of the hike.

We followed the path further in the same direction.  Soon, the hike became much more outdoorsy.  We were surrounded on all sides by tall mustard blossoms, so thick that we could barely see the river by the side of the trail.

There were bugs to chase and rocks to throw, and the kids were having a blast exploring this little piece of nature.

But before long, buildings loomed large near the path.  We decided it was time to turn around and head in the other direction.

We passed by all of the animals again, then came to a more populated part of the riverside walkway.  There were lots of sculptures here, great for climbing and sitting on.  Little wooden bridges and decks had been built out into the river.

Basically, there was a lot to see and do.  Not one of my kids uttered a complaint about the length of the walk the whole way through.

And pretty soon, we reached the highlight of the hike – the Nahal Lachish Estuary, where the river empties into the sea.

Mouth of the River

It was one of the most picturesque river/beach junctions that I had seen.  The sunlight glistened off the river, quiet and still in comparison to the dancing waves beyond.

The beach itself was one of those flat sand beaches with rocky outcrops, where the tide comes in much further than you expect it to.

Everyone ran towards the water. To get close to the sea, you had to get wet (at least on that day).  Soaked sweatshirts came off and pants were rolled up.  And the children raced towards the waves, splashing in chilly sheer joy.

And a Pirate Playground

After getting as wet as we possible could on an overcast sixty degree day (which was pretty wet), we were ready to head to the massive pirate playground on the side of the beach. (That’s where all the normal people were hanging out.)

The kids played there for a half hour.  And they could have stayed for several.  But it was getting very, very late in the day and home was an hour away.

We dragged them away from the playground and headed back up the path.  It didn’t take long to walk the trail back to our car.

A river, a zoo, two playgrounds, and a gorgeous beach – it was the first hike I’d ever been on that included all of that.  The walkway along Nahal Lachish in Ashdod was an atypically fun way to spend a day outdoors in beautiful urban backcountry.

So, while this may not be your typical hike, it is a great walk along a river and towards the sea, with lots of natural beauty and man made attractions. And it’s wheelchair accessible/ stroller friendly, which is an important feature for many.

You could come here with kids and have lots of fun. Or go without kids for a quiet walk in a beautiful place outside of the hustle and bustle of the city.

There are no trail markers to follow on this “hike”. Just park at the Waze point then head towards the bathrooms. You’ll see a sign for Park Lachish. Make a right when you get to the path to walk it the way we did.

I was tipped off to this great walk by one of our readers. If you have any tips or hike info to share, please send them my way!