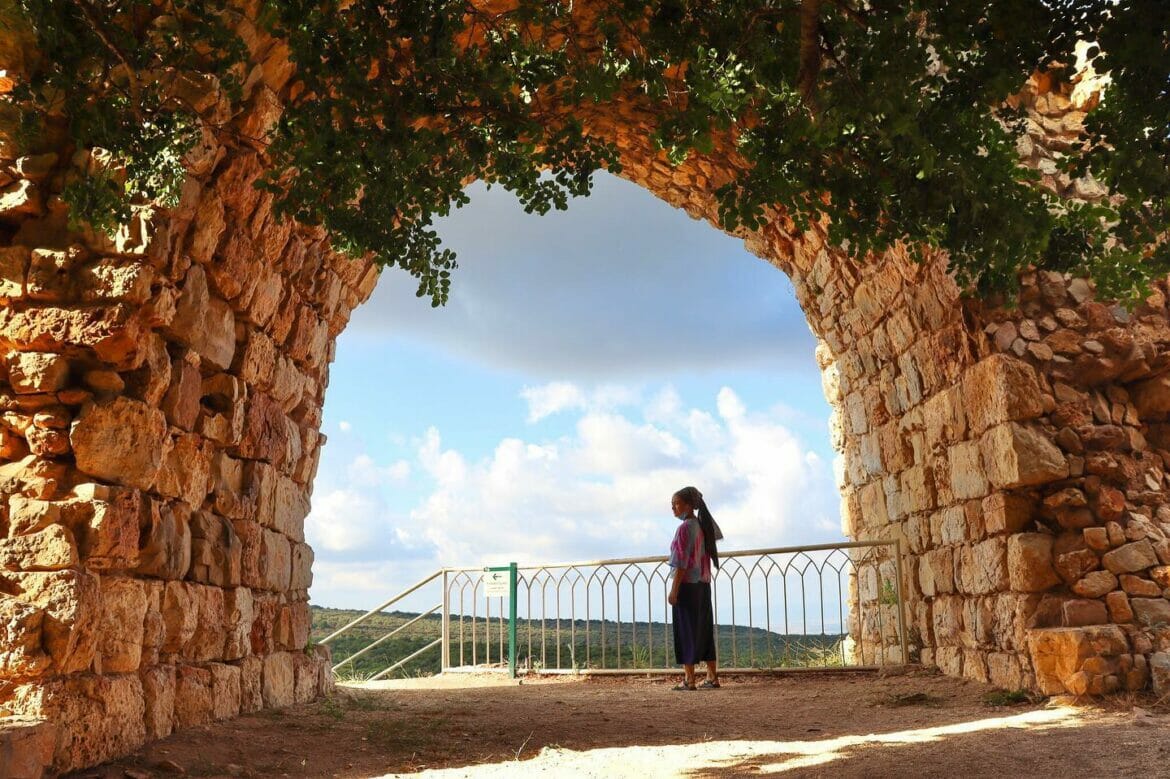 Old stuff.  It’s everywhere in Israel.  Around the country, you can find first and second temple remains – from pottery digs to ritual bathhouses.  There are fossil walls and sheikh’s tombs…graves of righteous men and buried cities of old.

And there are fortresses.  Some of these structures look similar to ancient castles in Europe, with arched windows and steep, dark passageways.  That’s because they were built by Crusaders.

Yehiam Fortress National Park is located in a small (and really cute) community in the Galilee called Yehiam.  This kibbutz has quiet charm – from their craft beer pub (Malka Brewery) to the towering fortress that sits right on its outskirts.

Yehiam Fortress was a Crusader Fortress like others in Israel.  But what makes the stronghold so unique is that it was used again and again, from Crusader times to present day.  Its last vital role was as a defense point during the War of Independence – kibbutz members fought bravely to defend their right to live in the Land, using the fortress for protection.

Aside from its rich history, Yehiam Fortress is also a place of great natural beauty.   With rolling green mountains year-round, the views are simply unreal.

We hit up this fortress on a trip in Northern Israel a few weeks ago, mid-August.  The fortress was part of a full day of fun in the Yehiam area – we took a hiking trail from the National Park, as well as visiting a lake and a stream nearby.  But I would argue that the fortress is worth visiting all on its own.  It was just beautiful!

Here’s how we walked through Yehiam Fortress National Park:

We drove through the quiet kibbutz towards the fortress on its outskirts.  It was a beautiful, overcast, mid-summer morning.

At the gate, we picked up a Junior Ranger booklet and pin, along with maps in English and Hebrew.  The parks worker informed us that the movie would be showing in about a half an hour, giving us plenty of time to get started on our exploration of the fortress.

First, we took in the scenery on the outside.  The park was full of tall trees.  Under the trees were several stone picnic benches – it seemed like a great place to hang out even without the fortress.

Junior Ranger booklet in hand, we were ready to get started with our exploration.  We began by peeking down into a dark burial cave, then headed towards the grand entrance.

First thing we noticed was the unique layout of the fortress entryway.  Beneath an arched ceiling, the corridor twisted back and forth.  Small windows were just the right size for an archer aiming his bow – ready to defend against any unwelcome visitors.

From here, we proceeded up towards a beautiful archway lookout.  This was the first place I noticed just how gorgeous the view was from Yehiam Fortress.  Puffy clouds in a crisp blue sky hovered over deep green hills.  Down in the valley, we could see the Yehiam Riverbed (where we would be hiking later), looking particularly lush in contrast to its surroundings.

While I was getting lost in the view, my family had wandered off to climb the Crusader tower.  Eventually, I followed.

I entered the dark tower and began to climb a steep set of stairs.  This particular staircase reminded me of January 1988, visiting a castle in Portugal.  All I really remembered about that day was how very steep and high the steps were.

On my way up to the top, I peeked into rooms on the various levels.  Slot windows illuminated the dark stairwell, letting in just enough light to negotiate the narrow passageways.

After quite a climb, I reached the top and the rest of my family – they were all taking in the sights from their own spectacular lookout.  From up here, the view was even more impressive.  Between the Crusader castle, the cool breeze in August, and the rolling green hills, it felt like we were on a European vacation.

After the tower, we headed back down the stairs, then took a little detour towards the audiovisual presentation.  The movie took us through the history of the fortress – from its foundation by Teutonic Knights in the 13th century to its occupation by Mamluk Sultan Baybars.  About 500 years after the fortress was conquered, a local Sheikh (Mahd el-Hussein) rebuilt parts of the fortress and made it his stronghold.

From then on, Yehiam Fortress passed through various sets of hands until finally, in 1946, Jews established Kibbutz Yehi’am, using the ruins of the fortress as their first temporary shelter.  In the film, we heard from an older kibbutz member who had actually been there when the fortress was besieged in the War of Independence.  She told a bittersweet story of triumph – the kibbutz members withstood the enemy attacks, but many were killed during the fighting.

After the film, we took a full tour of the rest of the fortress, exploring all the different pieces in the puzzle of history.  There was an old mosque and a bathhouse.  Outside of the fortress, we got to see bunkers, left behind from the War of Independence.

A cute rock hyrax had made his home out of the remains of the military zone.

From here, we climbed a few trees, then waved goodbye to Yehiam Fortress, it’s spectacular views, and interesting architecture.

And who would have guessed?  On our way out of the National Park we saw the elderly kibbutz member from the film, right there in the flesh!  She was taking a walk through the grounds of the National Park with her granddaughter. We, of course, said hello and told her how much we enjoyed her story in the film.

Surprise and adventure await at Yehiam Fortress in the Galilee.  This hidden gem brought together beauty, history, and lots of fun in one quaint little National Park.

Here’s what you need to know to visit Yehiam Fortress National Park:

Questions? Have you visited Yehiam Fortress National Park? Let’s hear about it in the comments!