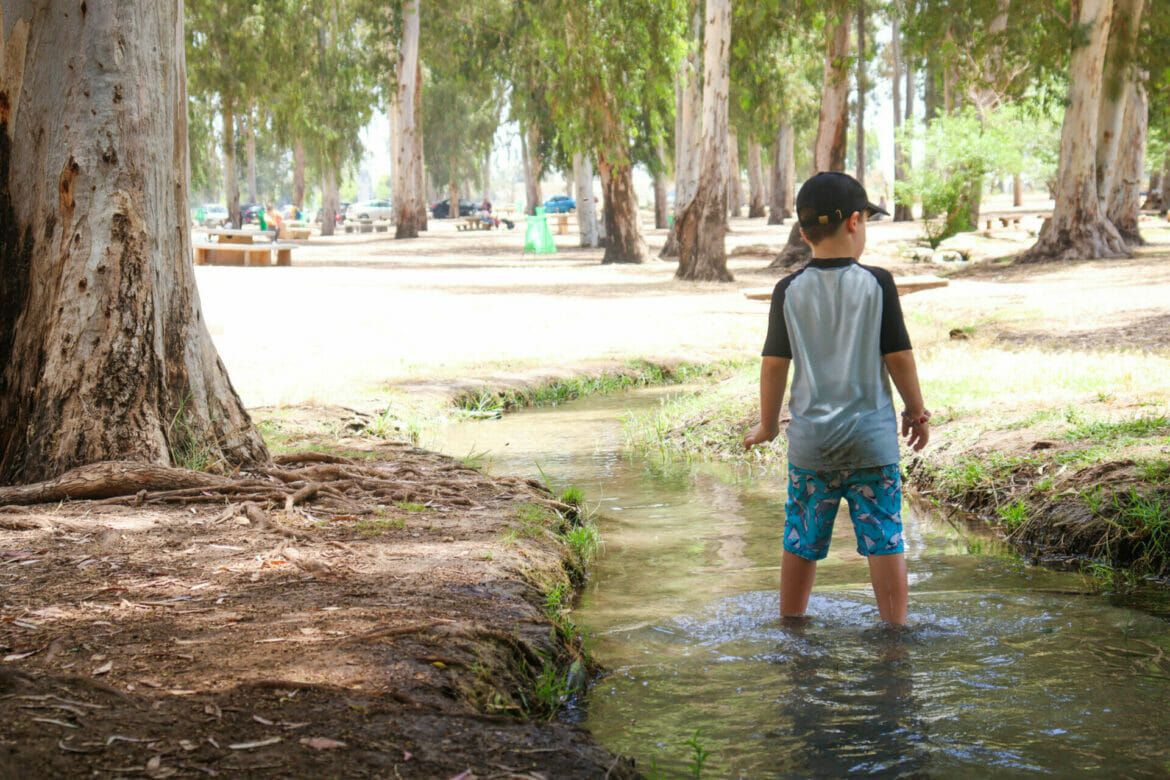 I’ve come to realize that I live in a really special place.

Where I grew up in the United States, there were no kid friendly summer activities that included trips to an ancient fortress.  An outing to play in the water in the summertime never involved exploring a five-thousand year old city, written about in ancient Egyptian and Biblical texts.

But here in Israel, excursions like this are commonplace.

Many weeks ago, I was searching for a short and easy hike with water and shade close to home.  I remembered Tel Afek National Park, part of the greater Yarkon National Park in Central Israel.  At Tel Afek, there’s a large and beautiful lake, a pretty little stream, an ancient fortress, and more historical wonders.

So, we packed up a picnic and some bathing suits and went to splash in the stream.  But once we entered Afek National Park and picked up a Junior Ranger booklet, my kids wanted to see everything that this incredible place had to offer.

Our little morning out turned into an adventure into history.  We learned about the origins of the ancient city of Afek in the 4th century BCE and followed its passage through history to the Ottoman and British Mandate period.  Then, we cooled off with a picnic by the lake and a walk through the stream.

Even after spending a couple of hours at this small park, there was a lot that we didn’t get to see. In the fall, there’s a special flower trail called Shvil HaHatzavim, where hikers can enjoy a walk along a flower lined pathway.  And in the wintertime, more seasonal lakes form around the park, attracting bird and amphibian life.

We’ll be back to explore this wonderful park at another season.  Here’s how we took a summertime family adventure through the Tel Afek National Park:

We pulled into the ticket booth and passed our Parks Card to the worker at the booth.  My kids requested a Junior Ranger booklet.  For 10 NIS, we received a pin and a little booklet, which my boys immediately got to work on.

We debated how to tackle the trail. Should we follow an organized loop, as suggested on the Parks map?  Or should we just wander along towards whatever attracted the kids’ attention?

It felt like more of a wandering sort of day, so we left our path up to the kids.  They saw the fortress up ahead, and they wanted to go explore.  We turned to the correct page in their Junior Ranger booklet and headed over.

This wasn’t the first time my husband and I had been to the Afek fortress, otherwise known as Antipatris.  Last time, we had passed by on a long hike through Yarkon National Park.  This time around, we took the opportunity to explore the ancient structure thoroughly and completely.

As we climbed a set of narrow stone steps into a circular corridor lined with arched windows, we reviewed the history of the ancient city.  Afek’s first walled town was built in 3000 BCE.  It then became a fortified city with palaces, one of which housed an Egyptian governor.  Ancient inscriptions in Akkadian were found at the site, indicating its Egyptian influence.

Later, Afek was mentioned in the book of Joshua, as one of the Canaanite cities which was conquered by the Israelites.  Next, it was part of the Greek and then Roman empires, and the area really flourished.  The main street (Cardo) from this time period still remains somewhat intact.

The fortress that we were climbing through was actually a remnant of a later time, the Ottoman period, when it was built to guard part of the Via Maris (an ancient trade route linking Egypt with the Northern empires of Syria.

My kids spent much of our time at the fortress climbing up and down stone steps and peeking through the narrow windows.  The rest of us read the signs and explored the city.  As we rounded one last bend, we got our first glimpse of the large and beautiful lake just down below.

Picnic by the Lake

Of course, once we saw the lake, it immediately became picnic time.  We found our way out of the ancient city and followed the path towards the water.  The lake was a turquoise green, surrounded by a pretty path lined with Eucalyptus trees.

Little fish swam in the water, along with lots of big, brown catfish.  A black heron perched on a rock at the center.  We got comfortable in the shade of a tree and laid out a picnic on the grass while we watched water birds preening their feathers.

After relax time, we were getting hot and ready to cool off in the water.  Since no swimming is allowed in the lake, we followed the path towards the stream that emerged from the Rosh Ha’Ayin Springs.  Then, we stepped into the shallow water to cool down.

The boys splashed around for while in the shade. Then, we continued upstream towards the source of the water.  At the end of the line, we reached a large, clear wading pool with a miniature waterfall.  All of the big people settled down on the rocks around the pool with our feet in the water while the kids played in the clear, (catfish-free) water.

After a morning full of fun, we dragged the kids away from the pool (much to their dismay – what kid wants to stop water play in the summertime?) towards an area known as the winter lake.  There was no water left in the lake at this time of year.  Instead, it was filled with tall green grass.  Blue parakeets flew between the trees and frogs croaked somewhere out in the distance.  It was a really pretty scene.

We passed by the autumn flowers (Shvil HaHatzavim) trail, dry at this time of year, and then made our way back to the car.

That morning we had experienced a mini-adventure and chill time with our kids all rolled into one.  This National Park has a little bit of everything: natural beauty, kid-friendly fun, and fascinating history.  Tel Afek is a great place to explore at any time of year.

Here’s what you need to know to hike this trail at Tel Afek:

Questions? Have you hiked this trail at Tel Afek? Let’s hear about it in the comments below!