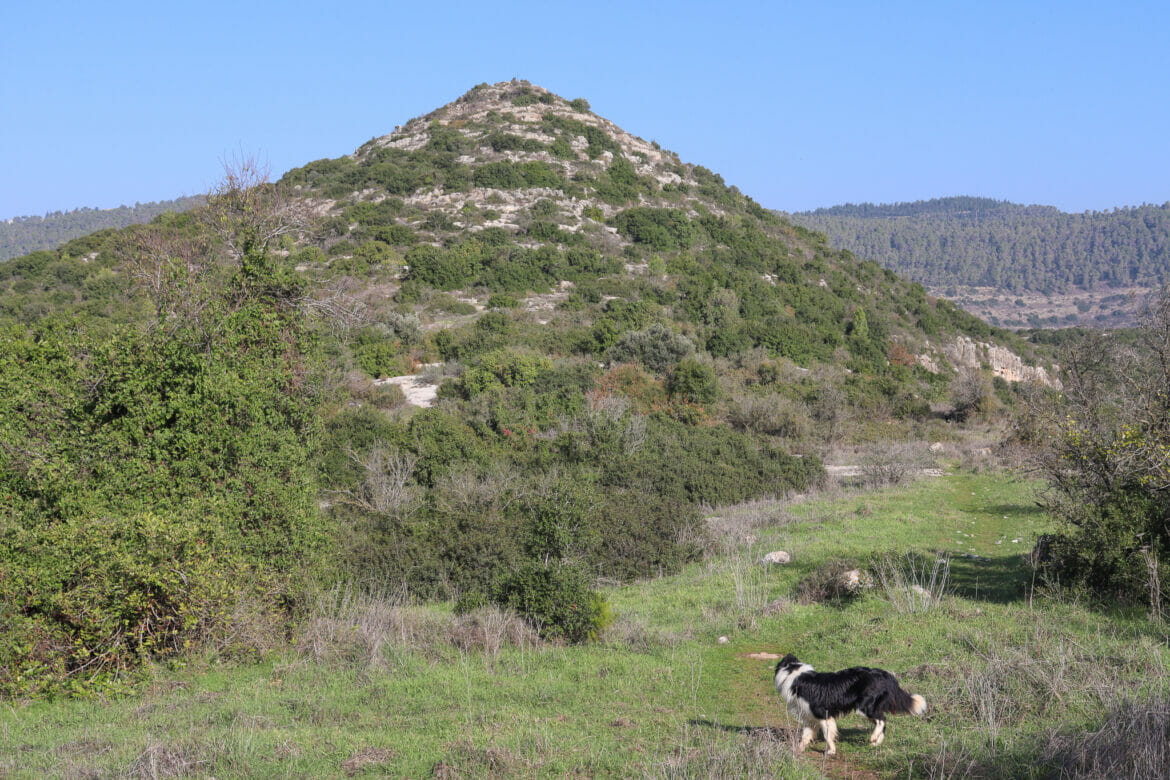 There are some trails that we just keep on coming back to.

At the Sorek Nature Reserve near Nes Harim, there are many beautiful, forested, mountain pathways.  There’s the Nahal Katlav Scenic trail, a long-time favorite with my family.  A little deeper into the reserve, we like to hike Nahal Katlav itself, a shaded trail that we return to again and again.

This week, we decided to document another favorite trail to share with the world: The Hurvat Tura trail.  The name sounds unassuming, but the trail itself is anything but.

The Hurvat Tura trail has a little bit of everything: gorgeous views out to the valley, shaded paths, and an awesome ascent up a miniature mountain.  The mountain itself is home to the remains of an ancient Hasmonean Fortress, along with cisterns, wells, and crumbling walls.

But this little mountaintop is more than just a history lesson.  The cool breeze and incredible views from atop Hurvat Tura are well worth the tough ascent.

Here’s how we hiked down into the valley and up to Hurvat Tura in the Sorek Nature Reserve. Since we’ve hiked it so many times, some of the pictures down below will be from a springtime hike to Hurvat Toura with kids:

The trail began with a little bench and a lookout: to rolling valleys and green hills (which are only this green during rainy season!)  In the distance, the Hurvat Tura was clearly visible, atop a small mountain that just begs to be climbed.

We began the trail by walking along a densely wooded pathway, through bushes and greenery until we reached a clearing.  And then the descent began.

This trail is best tackled on dry days, preferably at least a week after the last rain.  Unfortunately for us, it had rained just a day or two earlier, so the descent was quite slippery!

We did our best to hold on to bushes and branches as we carefully climbed down the green trail.  For me, this was the hardest part of the whole hike.

It seemed like a lot of climbing, but before we knew it, we were on the black trail, where things began to even up a little bit.  As we walked, we were really able to enjoy our surroundings: impressive views out to nature from our enclosure amongst pine and katlav trees.

We wove our way in and out of the shade.  In some places, the overgrowth was so thick that it formed a dark tunnel, with sunlight pouring through at the end.  In other places, we enjoyed the sun shining on our faces.  Soon, we had stripped off our sweatshirts as we warmed up in the sunshine.

We stopped every so often to examine a patch of cyclamen or narcissus that we found on the trail.  It seems that every time we walk at the Sorek Nature Reserve, we are surprised all over again that this wild beauty is so close to home.

Path to the Sky

After a long walk on the black trail, we reached an old well and a small dust pathway.  This bit of the past signified the beginning of our ascent up the hill where Hurvat Tura is located.

We didn’t exactly follow the trail the whole way up.  There was just too much to explore!  We found caves, wells, and an old olive press.  In one spot, a giant fig tree grew out of a cavernous cistern, once used to gather a water supply which sustained life at the fortress up top.

As we climbed the hill, we ascended higher and higher into the sky.  Soon, we reached the top of the mountain.  We gaped at the beautiful 360 views all around the mountain peak.

What IS This Place Anyway?

Once upon a time during the time of the Second Temple, Matityahu and his family lived in Modi’in and the surrounding area. As oppression by occupying Greek forces in Israel grew, Matityahu and his five sons (the Maccabees) started a rebellion against the Greeks. This war lasted for some time, and was quite successful. The Maccabees were able to re-establish Jewish control in many areas that were previously ruled by the Greeks.

Tur Shimon is a fortress build by Matityahu’s youngest son, Simeon (Shimon). He was the first to hold the joint title of general, high priest, and also nasi (prince). In time, he became king and established the Hasmonean dynasty.

Archeologists have attempted to identify where his fortress was actually located. As it just so happened, Hurvat Toura was labeled “Sammunieh Ruins” on old British maps. The area around the fortress was labeled “Wadi Ismain.” Both of these names contain the root S-M-N (as in Shimon!). This is why Hurvat Toura is thought to have once been the Hasmonean king Shimon’s fortress.

Atop Hurvat Toura, the wind blew in our faces.  True, it may have once been a Hasmonean Fortress.  But for us, this cool, beautiful spot in the sun was the perfect place for a hot cup of coffee.

We poured from our thermos into two tin cups and sat back to enjoy the views.  From up there, it felt like we were on top of the world.  And the meadows, trees, and rolling hills down below made that world a very beautiful place to be.

It wasn’t the first time, nor the last, that we’ve passed the morning on top of that hill.  So, we only felt a bit of regret when it was time to pack up our things and head back.

We returned the way we came, passing another group of hikers who were heading out on the black trail.  After a while, we reached the crossroads to the blue trail, where we would be making our ascent.

Climbing up always seems to be easier than going down.  We actually enjoyed the climb.  We used hands and feet to pull ourselves up between layers of rock.  Bending close to the earth, we were able to take a close-up look at green moss and white flowers that grew everywhere.

As fast as we went, our border collie was still faster.  He waited patiently for us to catch up.

As we neared the top, we began to see more nature lovers out on the trail.  There were so many spots along the way that were perfect for a picnic – and several couples were taking advantage of the spectacular views.

After a quick walk back up, we reached the black trail, then the green trail which returned us to our parking spot next to the highway.

As always, our journey to Hurvat Toura had been just perfect:  beautiful and quiet, strenuous yet relaxing.  This Jerusalem Area trail at Sorek Nature Reserve fits the bill for hikers seeking solitude atop a quiet mountain.

Here’s what you need to know to hike this trail to Hurvat Toura:

Journey to the Clouds: Mount Sansan

1 thought on “Green Valleys and a Hasmonean Fortress: Hurvat Toura”