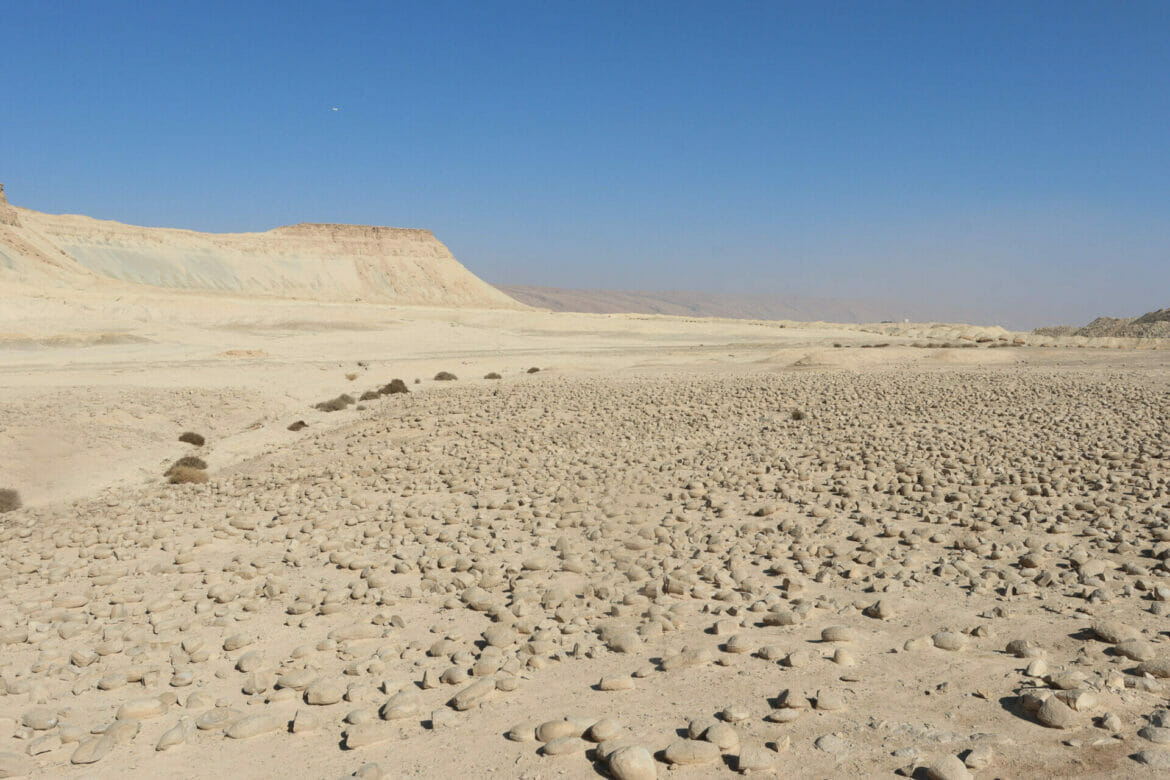 In the Northern Negev, west of the Dead Sea, lies Mount Zin, a flat top mountain that stands out in its unvarying surroundings.

The area around Har Zin isn’t wild and beautiful.  Instead, phosphate mining factories and construction roads pepper the landscape.  Mount Zin stands alone as a monument to the natural landscape this area once was.

The trail up Mount Zin is intense – it’s so steep that although the hike is quite short (about 3 kilometers), the trail is recommended for physically fit hikers only.

We were excited to challenge ourselves with a climb up Har Zin.  And we were really looking forward to checking out the Potato Field (Sde HaBulbusim) at the bottom of the hill.  This large field full of medium sized rounded stones has puzzled scientists and archeologists for decades.  Some say the stones (some of which contain fish fossils) came from a body of water which once occupied the valley.

We tackled this trail on a cool and clear November morning.  The trip up Har Zin was, indeed, challenging.  But the views from the top were spectacular.  And the rock climbing along the way was really fun.

Here’s how we hiked up Mount Zin and to Sde HaBulbusim down below:

This is one hiking trail that’s very easy to find.  After following our GPS to the parking lot/campground, Mount Zin stood clear and tall in the distance.  There was nowhere to go but up.

There are two trails up the mountain: blue and green.  The blue trail was supposed to be more intense and steeper.  Many suggest taking the green trail up and the blue trail down.

But I love climbing – the steeper the better. (And as far as I’m concerned, the opposite is true for descents.). So we chose to start with the blue trail which would take us straight up Mount Zin.

On the first part of the blue trail, a steep, dust path led into the sky.  It almost felt like we were shuffling backwards – with every step up and forward, our feet sank a little bit into the dust and pebbles.  But we just kept plugging away, putting one foot in front of the other.

After a short 10-minute climb, we got to the fun part: the metal rungs and ladders.

We squeezed through crevices in the stone, grabbing onto a metal rung whenever one was available.  Using both hands and feet we ascended, sometimes grabbing on to stone protrusions to hoist ourselves up.

Soon, we had passed the first ascent, then moved onto the second, then the third.  After a few short vertical climbs, we were there – at the top of the mountain.

The top of the mountain was a completely flat plateau.  We walked across easily from one side to the next, taking in the panoramic views all around us.

Rolling hills and valleys of sand and rock lay under a crisp blue sky.  In the distance, we could see mineral mining factories, standing out in an otherwise natural landscape.  A long ridge jutted out to the other side of the mountain – there was no path to climb there.

At some time in the past century, Har Zin was identified as Hor Hahar – the mountain where Moses’s brother Aaron was buried.  At this point, historians are pretty sure that Aaron’s burial site is at a different place altogether.

Once we finished taking in the views, we headed down on the green trail.  There were metal rungs and ladders on this trail too.  The path snaked back and forth along the side of the mountain, making the incline a little less steep.

After lots of exhilarating climbing, we reached another dust pathway.  This one wasn’t quite as steep as the other, but it still wasn’t easy on the legs. On the other hand, it did look like a super fun slide!  I decided to slide down the mountain instead of walking.

Only an hour and half after we started, we were back at the trailhead.  Now it was time to search out the potato field.

We followed the green trail to the other side of the lot, climbed over a ridge, and there we were: Sde HaBulbusim.  This field full of stones is indeed an unusal site.  The “potatoes” stretch out for about a hundred meters, with no apparent explanation for why they exist.

Archeologists have their theories.  But locals tell their own legends about the origins of the stones.  One tale says that the stones appeared when Elijah the Prophet passed through a watermelon field and asked for a taste of the fruit from its owner.  Angered when the farmer refused, Elijah turned all of the watermelons into stone.

Another local tales attributes the strange potatoes to a shower of stones that God unleashed upon Sodom.  And one final story maintains that the stones are petrified heads of the townspeople who once lived there.

We made our way through this impressive, but weird stone field at the foot of Mount Zin, then returned to the car.

It felt good to complete this hike.  After less than two hours, we had climbed up an impossibly steep mountain and back down again.  We had seen the views from above and from down below.  And we had encountered a cool natural phenomenon, a strange rock/potato field in the middle of the Negev Desert.

The hike up Mount Zin and to the Potato Field was a great, short trail for anyone who loves a strenuous adventure.

Here’s what you need to know to hike the trail to Mount Zin and the Potato Field:

Questions? Have you hiked up Mount Zin? Let’s hear about it in the comments!