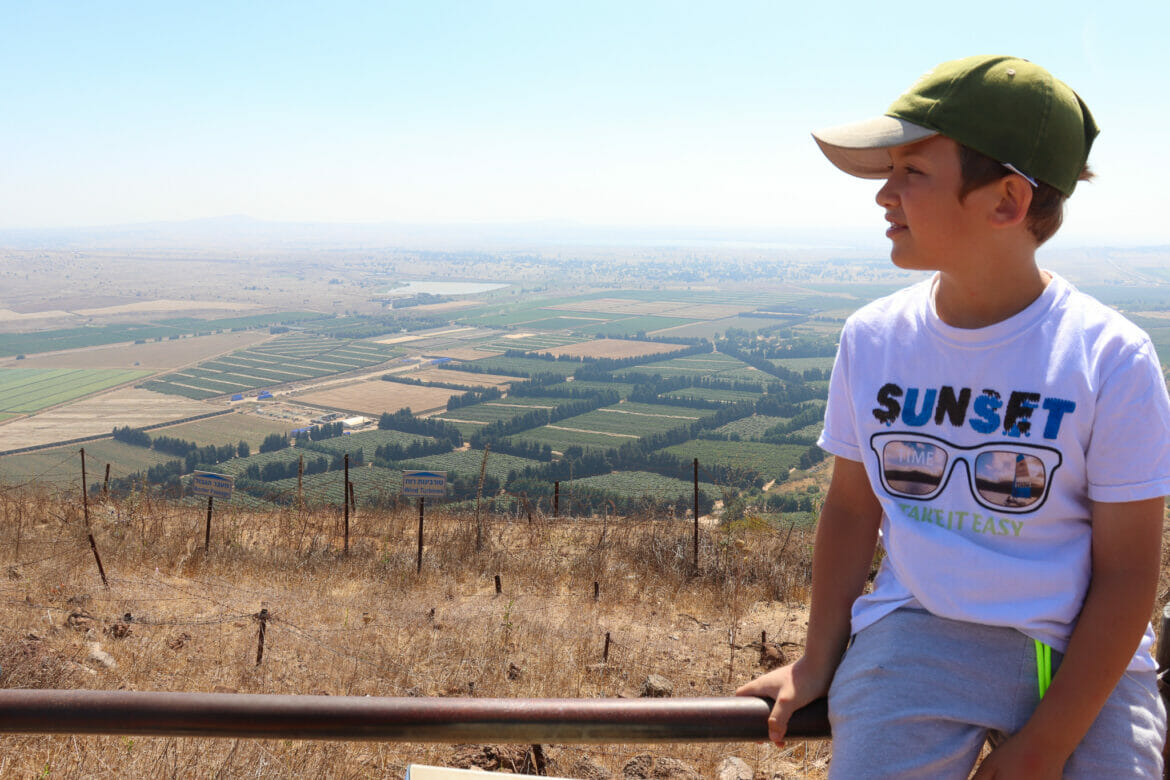 In the summertime, all anyone really wants to do outdoors is cool down.  And the best way to hit the trails while staying cool?  Go on a water hike.

But there’s more than one way to experience a drop-in temperature mid-summer.  Head for the mountains, and it’s going to get chillier.  That’s where a hike at the top of Har Bental in the Golan Heights comes in.

We took a trip to Mount Bental while we were up North on vacation last week.  It was nice to escape from the crowds and take a break from the wet routine of summer water hikes.

Our plan was to drive to the top of Mount Bental early on in the day and take a tour of the top.  Then, we were going to hike down the side of Bental towards the reservoir in Kibbutz Merom Golan down below.  Rather than make our little kids climb back up to return to the car, I volunteered to run back up the mountain and drive around to get them.  I needed my morning exercise!

We all had a great time on top of Har Bental.  There was so much to see and do.  The views were spectacular. And it was blessedly cool and beautiful.

Here’s how we hiked around and down Mount Bental in the Golan:

As we stepped out of the car, we really couldn’t believe the sensation we were feeling – it was cold outside!  Outfitted in swim gear for our water hikes later in the day, we kind of wished we had taken a few light sweatshirts along.  On the other hand, it was nice to feel cool in August.

We paused at the parking lot for a quick look around.  There was a lookout out to the surrounding area on one side.  On the other was a metal dinosaur sculpture made by a local artist – fun for posing with.  We walked past a lone café, surrounded with thick hydrangea bushes.  It felt like we were somewhere other than Israel – maybe Ireland or Wales, where hydrangeas and cool breezes are summertime classics.

Past the (non-kosher, but really cute) café, we reached the deck.  There were signs explaining the views, along with automated tour guide machines.  Just press a button, and you get a full explanation of the history of Har Bental.

We sat there listening to the story of the mountain and its surroundings.  Har Bental (and the nearby Mount Avital) are volcanic crater mountains.  Mount Bental was the site of an important battle during the Yom Kippur War.  Israel captured the mountain while defending itself against Syrian attack.

In the distance, we could see old Kuneitra (a Syrian city) along with new Kuneitra.  While we listened, we looked out and identified all of the different places mentioned in the monologue.

Our kids were ready to get exploring.  We continued on, first to the binoculars to get a better view of landmarks in the distance.  We put in a coin let our kids take turn peeking through.

Next, it was off to the bunkers.  Once upon a time, this mountain was an army outpost, used by Syrians to defend the area (and attack Israel).  There were old turrets, little tunnels, and lots of places to climb and explore.  We walked through what remained of times of war, imagining what life was like when Israelis defeated Syria, captured the Golan Heights, and defended themselves from a hostile country right on their border.

After a full tour of the military base, we made our way back towards the coffee shop for one last look out from the balcony.  Syria was dry and yellow in the distance.  But down below, the Golan Heights spread out before us in rectangles of green, punctuated by rolling hills and few small lakes.  In the distance, the Hermon stood tall inside a curtain of cloud.

We backtracked towards the parking lot, then found the red trail which would take us down the side of the mountain.  It started off cool and shady, an easy walk at a slight downhill incline.  The views were unbelievable, and the path was tree lined. But after a while, we began to warm up.

Then, the trail became steeper.  We walked down at a sideways angle, careful not to slip in the loose dirt as we descended.  Eventually, the little kids gave up and took to the ground, sliding down.

We reached a part of the trail where it was so steep that a railing was required. I was kind of regretting my decision to run back up at the end.  But too late now!  We were almost at the bottom of Har Bental – there was no turning back.

As we approached the reservoir, I said goodbye to my tired kids and turned back up the mountain.  They were going to continue walking along the side of the reservoir to a road where I could pick them up in the car.

I ran up Mount Bental, back along the red trail.  At the beginning, it was a little challenging.  But before I knew it, the ground evened out and the world cooled down again.  I couldn’t believe how quickly I reached the top.  What was a long walk with the kids was a quick jog for me.

Ten minutes after reaching the top, I picked up my crew next to the reservoir.  Everyone was exhausted from the “long” walk down the mountain.  But they were happy.  It had been a great morning, one that gave us a fascinating glimpse into history and geography in a spectacular setting.

Beauty, history, and crisp mountain air come together on Har Bental, making this little hike practically perfect for just about anyone.

Here’s what you need to know to hike around and down Mount Bental:

Questions? Have you visited Har Bental? Let’s hear about it in the comments!