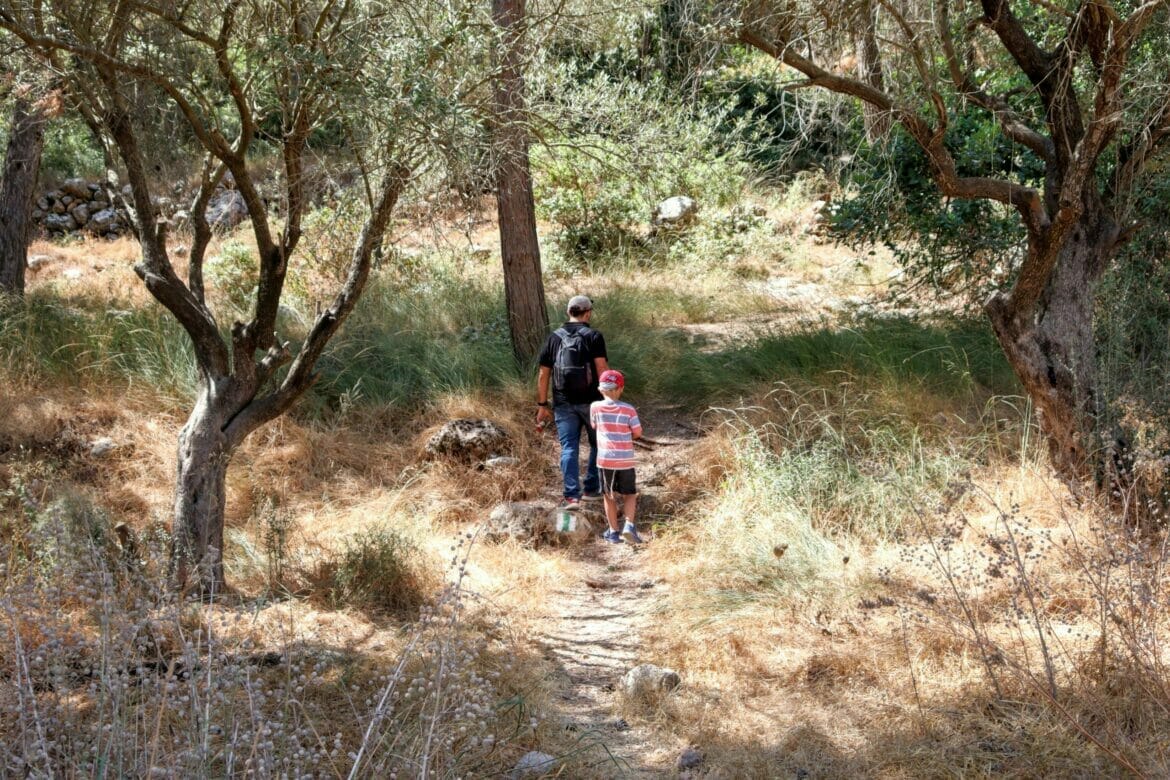 The best trails are often the undiscovered ones, the ones that are created by wandering along paths that you’ve never heard of before.

This past Friday we got a late start.  And we had my seven year old with us for the morning.  And we only had a few hours to hike.

The good news was that it was a beautiful day, uncharacteristically cool for the summertime.  We could easily hike into the forested area near Beit Shemesh without melting in the heat.

We had our eye on one particular mountaintop that we wanted to scale, but we quickly realized that it just wasn’t going to happen given our time constraint.  So, as we drove in the direction of the forests near Nes Harim, we turned off onto a dirt road with a teeny tiny sign indicating a scenic trail around Har Ya’ale.

Right away we knew that even if we hadn’t discovered an amazing trail to walk, we had found a place of great natural beauty.  A quiet, clean, and forested picnic area greeted us down that dirt road.  Oak trees twisted all around, creating a picture-perfect filter for the sun’s harsh summer rays.

We had a place to start the morning (with iced coffee of course!), but beyond the picnic area we continued to follow the map of trails towards other new discoveries.

Here’s what we found in this less traveled section of the forests around the top of Har Ya’ale:

Probably the most relaxing, beautiful, and peaceful part of the hike happened in the first forty-five minutes, when we were sitting in our newly discovered hideaway under the trees.

The woods formed a graceful canopy over our heads.  Our seven year old took turns climbing through the twisty trees and playing pine cone fetch with our border collie.  And as we sipped our coffee, we knew that breakfast in this little spot was much better than brunch in any of Jerusalem’s popular cafes.

We were surprised that yet again, we had found a piece of natural beauty, close to home yet off the beaten path.  It seems that if you’re willing to wander a little bit, you can find a place that you can have all to yourself – no noise, no candy wrappers – just gentle wind and beautiful green trees.

We chose to sit in the carpet of dried oak leaves on the ground.  But there were two clean picnic tables we could have used.  After spending a long time in this most peaceful of spots, we set out on our journey around Har Ya’ale.

On the Blue Trail

We followed the blue trail through the forest and around the bend.  At this point, the plan was to walk out on the blue path for a little while, then visit a couple of landmarks we saw on the map.

The blue trail started off as a dust path around the peak of Har Ya’ale.  In the distance, we had a view out to tree covered hills.  And when we looked closely, we could even see Shimshon’s Cave in the side of the mountain.

As we continued down the hill, it became clear that my son needed a break.  And even though we had barely walked a half a kilometer, the large rocks and shade trees to the left of the path kind of begged to be explored.  So, we wandered in and sat on a big rock under the trees.

Towards the Goat Farm

After a cold drink of water, we continued on the blue path towards a Goat Farm marked on the map.  We had no idea what we would find there.  It didn’t seem like a likely place for a functioning farm.

We reached the spot where the farm was supposed to be.  Just as we’d expected, there were no goats in sight.  But there were remnants of several structures that once stood there.  It seemed almost like they had been destroyed.

Strangely enough, some parts still seemed tended, like the olive trees surrounded by wooden fences.  While we were sitting there, my husband checked his phone to see if he could find some history about the place.

He found that the destroyed structure was once a fully functioning, off the grid, goat farm.  We took a full tour of abandoned half-houses, then turned back up the hill on the blue trail.

Up to the Forester’s Lookout

Next, we made a quick right onto a green trail which led right up Har Ya’ale.  The scenery on the green trail was beautiful – there were stones to climb up and thick woods all around.  Pine needles piled in every crevice.

But it was a bit of a steep climb for my son.  We took several breaks under the cool canopy of trees as we made our way to the top.

After wandering along the green trail for a while, we came to a dirt road and a large clearing with a big tower right in the middle.  This was the Beit HaYa’aran (Forester’s Lookout).

Supposedly, this tower is here for a forest ranger to sit in.  From inside, he would be able to see the entire surrounding area and watch for fires and other disturbances.

My son really wanted to climb to the top of the tower.  But, the gate to the staircase was locked.  We walked up past the tower to a lookout on the other side.

Signs, Lookouts, and a Spaceship Memorial

Right past the Forester’s Lookout were several old KKL maps describing the views to the surrounding area.  We could see and identify a few communities in the distance.

Another sign depicted the battle movements of a certain battalion in the War of Independence.

We read all the signs, then followed the green trail out towards the next landmark on our map – the Challenger Memorial.  My son was excited by the prospect of a spaceship in the middle of nature.  I tried to convince him that it would probably just be a big sign.

But when we got there, the Challenger Memorial turned out to be a cool piece of artwork which doubled as a fantastic percussion instrument.  We had fun beating out the sound of war drums.  Who knew what unexpected fun we would find on a random Friday morning adventure?

After that, we decided to follow the path next to the highway for a five-minute walk back to the blue trail where we had begun.  We thought that walking along the road might be kind of unpleasant.  But it turned out that there weren’t too many cars, and seeing the giant street signs from up close made up for the lack of peace and quiet.

A few minutes later, we walked up the blue trail back to our car.  The morning’s journey had been totally, unexpectedly full of fun.

It’s really quite surprising what kind of nature and history you can to discover when wandering the beautiful wilderness of Israel. Here’s to hiking the road less traveled.

This hike is close to Gush Etzion, even closer to Beit Shemesh, and really easy to follow.  I would recommend you visit this trail even just for the quiet picnic area at the beginning.  It’s probably one of the few places in the area where you can actually find quiet in the middle of the summer.

What I thought was cool about the rest of the trail was all the history along the way.  From the old KKL signs to the broken-down farm and foresters lookout – it was like taking a tour through the past.  And while I would normally not recommend walking along the highway, this path next to the road was very short, and very safe (there was a guardrail next to it).

Part of the path is exposed, so bring a hat and enough water in the summertime.

To hike this path, park your car wherever you can find a spot along the road the Waze link takes you to. Then follow the blue trail towards the “Relaxation Glen”. Afterwards, continue on the blue trail around the bend and all the way past the green trail. Soon you’ll see the old goat farm on your left. Double back and make a right onto the green trail, which you’ll follow past the sights mentioned above all the way to the highway. Then turn left on the highway, and walk until you reach the blue trail again.

Questions about this path around Har Ya’ale?  Let’s hear it them in the comments below. 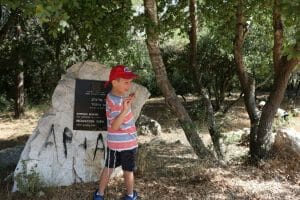 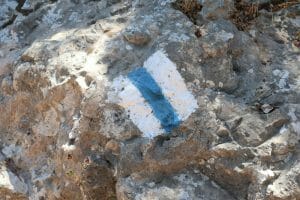 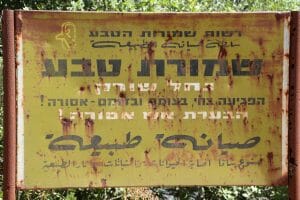 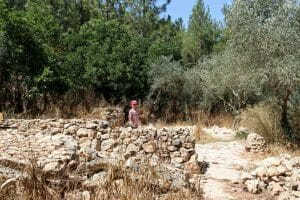 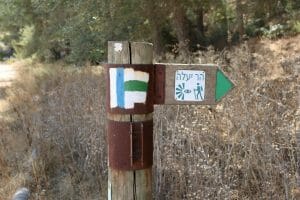 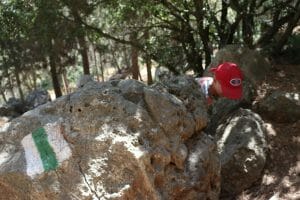 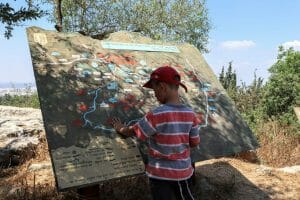 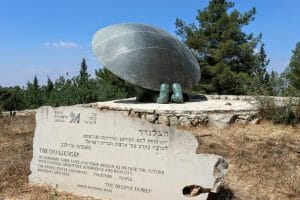 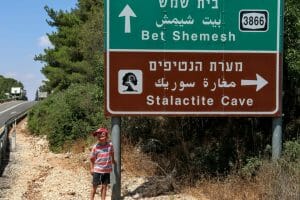 10 Off the Beaten Track Trails for Families

2 thoughts on “Off the Beaten Track Around Har Ya’ale”