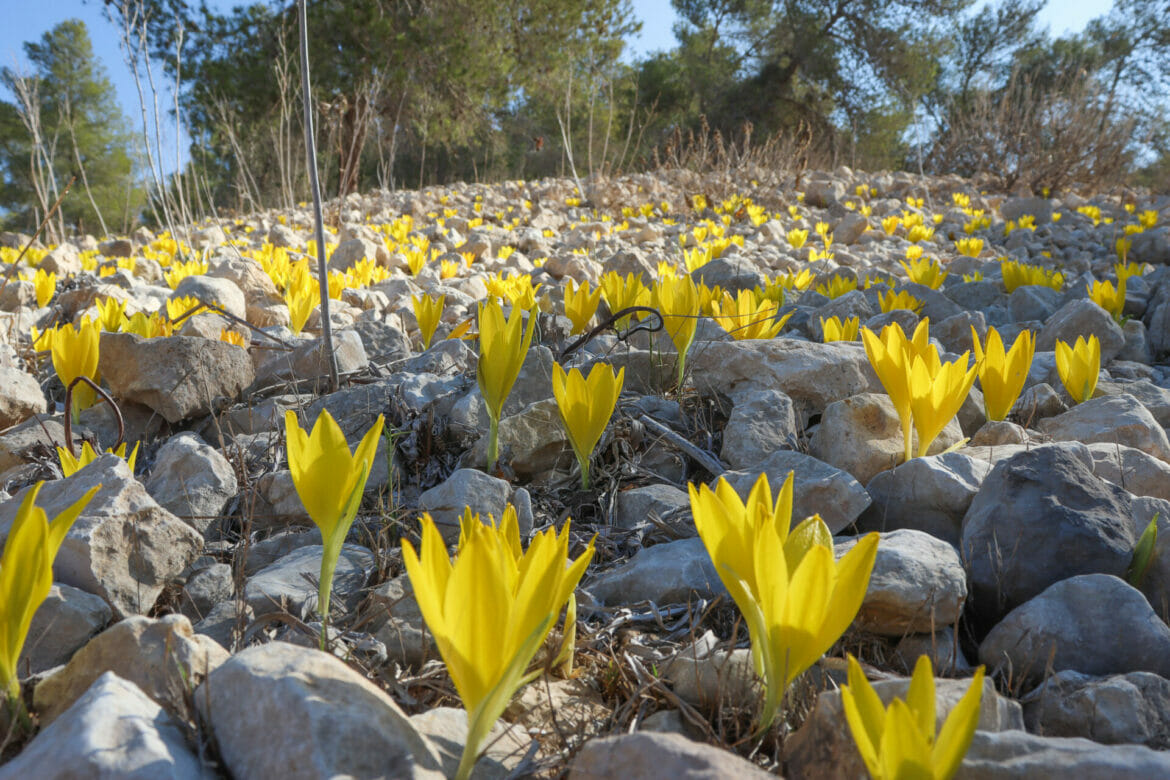 Sometimes it’s hard to keep up with the changing seasons in Israel.

One day the sun shines bright, and it feels like summertime may go on forever.  The next day, the wind blows and a storm rolls in, announcing the arrival of the rainy season.  And throughout all of these changes, magical things are happening out in nature.

Every autumn, some time between late October and mid-November, bright yellow Holmoniot (Sternbergia flowers) appear on the scene.  Holmoniot are a relative of the narcissus, another fall-time flower. The colloquial name for these Holmoniot is much debated, and not quite certain.  I’ve heard them called autumn crocuses, fall daffodils, and more.

But one thing is certain, these bright yellow blooms will come and go in the blink of an eye – it is very difficult to catch them at their peak anywhere in Israel.  This is why we felt so fortunate to discover sprawling patches of Sternbergia at Lahav Forest in southern Israel this past Friday.

Without giving it much thought, we had selected an easy and accessible hike in Lahav, just about an hour from home for our Friday morning adventure.  The trail was made up of two different areas in Lahav Forest, quite close to each other yet divided by a highway.  Most visitors to the area drive to each patch of woodland separately.  But when we saw how close together the two sites were, we decided to turn our flower peeping adventure into an 8 kilometer hike.

It was wonderful.  Aside from the abundant Sternbergia flowers, the trail itself was also quite lovely, featuring pretty woodlands and the remains of an ancient Byzantine town.

Here’s how we hiked this 8 kilometer loop trail at Lahav Forests:

We pulled into the dust lot at Lahav Forest with absolutely no idea what to expect.  Would this trail be a beautiful discovery?  Would we even see Holmoniot?  Did it really matter?  The weather was beautiful, and we were on our way to an adventure!

We were pleasantly surprised to discover that Lahav Forest was, indeed, a forest, with trees and all.  Perched near the trailhead were signs for “Derech Holmoniot”, the Sternbergia Trail, complete with little pictures of the bright yellow flowers.  We followed the path into the trees.

It was early in the morning, just about 7:30 AM.  The sunlight was peeking through the trees.  And as we walked, we began to notice faint glints of yellow to our left.  We had found them – the elusive Holmoniot!

In the semi darkness of the forest, most of the blossoms were still closed.  But we bent down close to the ground, taking dozens of pictures anyway.  They seemed to be just about everywhere, far more abundant than we had remembered from previous years.

Onward to the Ruins

Our mission accomplished, we continued on our way, following the trail through patches of sun and shade, noticing many clusters of Holmoniot along the way.  Having discovered flowers and a beautiful trail, our spirits were high.  We enjoyed the early morning breeze as we approached the next stop along the trail: Hurvat Abu Hof.

It seems like pretty much anywhere in Israel, you’re bound to discover antiquities.  Hurvat Abu Hof was once a large town that surrounded a church during the Byzantine Period (from the 4th.- 6th centuries).  At the ruins, we explored an old columbarium, an ancient quarry, a dwelling cave with courtyard, and of course, an old wine press.  There was even an old mosaic floor.

The remains were fairly intact, and fun to explore.  Rather than follow the loop exactly according to the trail, we decided to veer off track for a minute to see the remains of the church.  From the smooth, ancient stones of the church, we took in the beautiful views out to the woodlands of Lahav that surrounded us.

From the ruins, we continued to complete the loop, then followed the black trail towards our next stop of the day, Lahav Forest.  If we had wanted a short hike, we could have easily looped back to the car.  But we decided to walk between the patches of woodland, to get in a good walk and see as many Sternbergia flowers as possible.

And we were really happy with that decision.  The black trail, itself, was quite lovely, weaving through forests of unusual looking trees and past hills with their own dense clusters of yellow flowers.  We stopped here at this quiet place for some more flower filled photos.

Eventually, we approached Highway 6, and followed the tunnel under the highway which took us straight to the second Holmoniot trail in Lahav Forest.

This part of Lahav Forest was definitely the more popular Holmoniot spotting location.  Past the noise of rushing cars on the highway, there were picnic benches and marked trails, weaving up and down the rocky hill.  There were plenty of yellow blossoms here too, but no more than there had been on the other side of the highway.  Families and photographers were busily trying to capture the fleeting beauty of Holmoniot.

Before completing the short loop, we stopped at a lookout, Mitzpor Or.  This gorgeous lookout over Kibbutz Lahavim had been put together by the friends and family of a soldier who was injured in Tzuk Eitan and was ultimately killed in an earthquake in Nepal.

After taking in the views, we continued on our way, back under the highway and along the black trail back towards the trailhead where we started the day.

A Moment of Silence

Before finishing up for the day, we had one more mission to complete: breakfast!  We found a quiet, tree covered hill above the flower patches and pulled out our thermos.  As we sat there with our coffee, we absorbed the rich scent of pine, the quiet, and the natural beauty of this off the beaten track part of Israel.  Lahav Forest had been a real discovery, especially since we had managed to catch the yellow flowers at their best.

Forty-five minutes later, we had returned to the car, truly content with our morning’s adventure.  As we watched the cars and jeeps inching slowly along the trails, we congratulated ourselves on arriving early, before the crowds of flower peepers.  We weren’t the only ones who had discovered the beauty of autumn at Lahav Forest.

That morning’s gorgeous trail at Lahav Forest was the perfect place to capture the fleeting beauty of yellow Holmoniot flowers in early November.

Here’s what you need to know to hike at Lahav and Lahavim Forests:

Questions? Have you hiked this trail at Lahav Forest? Let’s hear about it in the comments!

Fields of Red in the Ruhama Badlands