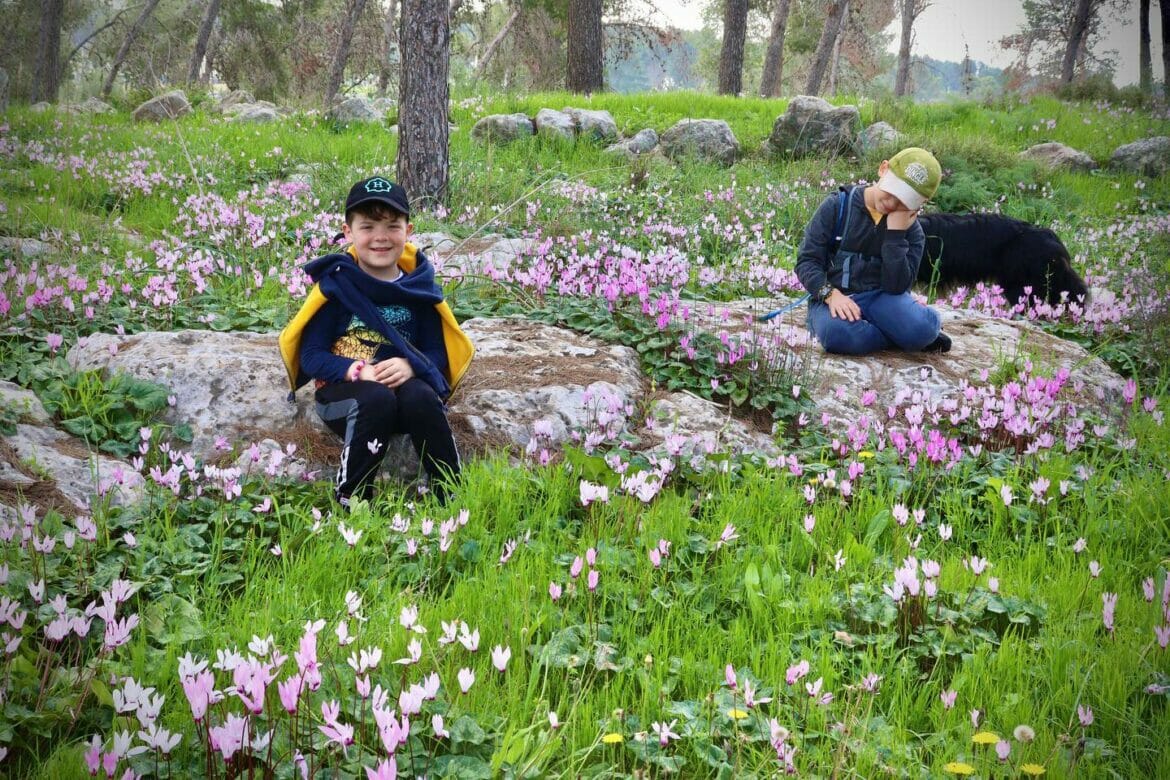 Early winter, after the rains begin, is one of the most beautiful times to explore Israel. Everywhere you look, you see a cornucopia of vibrant colors exploding out of every nook and cranny— or, more accurately, — every crag and crack in every rock.

This is not to outdo the spring, though. The wildflower phenomenon in Israel that occurs every spring is unparalleled. Each area of the country—whether it be hills, flat desert, ocean bluffs, rocky cliffs – has its own unique brand of flowers.

Coming from the East Coast of the US (Staten Island, NYC, to be more specific), I remember going with my dad to pick wild tiger lilies and daisies for my mom each summer on Fridays to celebrate Shabbos. I was always amazed at the beauty that was out there, free for the taking. What I find here in Israel, though, blows all of that away, both in abundance as well as in variety. Growing up in Staten Island, we were blessed with abundant forests, something that is unique for NYC, yet they were mostly uniform with slight variations in the soil (parts of the area have a higher clay content than many other areas) and a small variety of flowers. I would get excited each spring as the first crocuses and hyacinths poked up through the snow, followed shortly after by tulips and daffodils and, finally, by irises and gladioli. However, these were all in carefully planted flower beds (or in my yards’ case, haphazardly planted in messy rows), never wild and mixed in the forest (except for the occasional daffodils we would find in the forest.)

Fast forward a few years to my Aliya. We made Aliya in September with everything golden brown, no greenery, let alone flowers, to be seen. A few months later, the first heavy rain came along and, magically, the hills exploded with more colors than I could imagine.

Some find it confusing to tell the difference between flowers, so I’ll list a few I know here to help (I am not a botanist, nor an expert, just a nature lover ). We’ll start with the most common winter/fall blossoms: Daffodils (narcissus) are the yellow ones that stand roughly 10-16 inches high before flowering, and their beautiful yellow and white flowers mostly point to the side and down. The name ‘narcissus’ is related to the mythological handsome son of the river god who sat looking at his reflection until he died — hence, the daffodil looks downward. (These are very different from the sea daffodils growing near the shores that look nothing like them, except for the similar angle of the flowers).

Some confuse the yellow/white crocus with it . The way to tell them apart is that the crocus flower grows much closer to the ground and opens while it is pointing straight up. The flower of the crocus resembles a mini-tulip and is a cousin of the tulips many of us are familiar with from the US. The crocuses are my favorite because they come in so many shapes and colors. Despite this, they are mostly all the same size with a maximum height  under 6 inches, in my experience. Note: There is also species of flowers, called Sternbergia, which looks almost identical to a crocus.

The next to come are the cyclamens (rakefet), which start with a beautiful white and green leaf that is usually semi-heart shaped when spread completely flat. These flowers always amaze me: they sprout from crevices in rocks with little to no soil, and I find that unique. While they are primarily light pink to deep purple in color, they can come in other hues, such as white and red. These are often used as flowers on people’s Shabbos tables during the late fall and early winter (when bought from a nursery, NOT picked from the wild, as I will explain below.) One of the reasons for this is because of how hardy they are amongst the winter flowers; they can bloom for quite a while. I have successfully kept a store-bought one blooming indoors for over a month.

Slightly less common are the hyacinths. What I love about the hyacinths is their large blooms, their bright blue-purple color, and their sweet aroma. While these are less common, they can last for a few weeks , though not as long as the cyclamen.

My favorite Israeli wildflowers, though, are the irises and orchids that come up slightly later . While the irises come from bulbs and regrow in the same spot each year, most Israeli orchids are tuberous and can differ in their sprouting spot, while being adventitious plants, but less so than their tropical cousins, like the Phalaenopsis. Many of the orchids have edible flowers (but they are not legal to pick). An interesting fact about orchids is that they attract bees with specialized smells but do not produce pollen; only the vanilla orchid produces a truly harvestable product.

The end of the winter (February-March) sees a beautiful and special flower known as the lupine (turmus). These special flowers grow best in well drained areas with hollows underneath, which is why they were useful in marking areas with burial crypts in the ground below. Because of this, they are usually found on small hills or “tels”. These flowers are discussed throughout the Mishnaic text, especially in the tractates dealing with the laws of spiritual purity/impurity, for two reasons: their ability to mark impure areas (burial caves and crypts) and the consistent size of their beans, which often serve as a guide for measurement. In the north, even today, you can find Druze farmers cooking these beans by the side of the road in massive pots with all sorts of spices. More locally, you can find them in the “pitzuchim” stores, where they are sold dried or wet and spiced.

No article about Israeli flowers is complete without mentioning the abundant “fields of red.” The most common of the red flowers are the anemone (kalanit) and the poppy (pereg) flowers, which can blanket certain areas with unending fields of beautiful blood red flowers with black centers. There are at least 6 different flowers that can be confused for the poppy and anemone. A detailed discussion of these differences is an article unto itself, so I will just discuss one small difference: The unique feature of a poppy is that poppies usually have a bulge at the bottom of the flower/top of the stem from which opium farmers extract the thick white fluid they use to make opium.

There are so many other flowers to discuss that are beyond the scope of this short article. Perhaps a follow-up article will cover them in the future.

A Little Bit of History

It wasn’t always this way. 60 -70 years ago, before environmental protection was a thing, every school aged kid would go out and pick a bouquet for “Ima” and completely empty the “shetach” of its beautiful flowers. By the 1960s, this had become a real problem and grassroots organizations began to pop up to push for legislation to stop it. Finally, in 1963, with the urging of Uzi Paz, it became illegal to pick wildflowers. Campaigns throughout the schools were also launched to teach children about protecting the wildflowers. Today, we see the great success of this program with beautiful flowers of every shape, size, and, especially, color dotting the country. Do your part in keeping it this way by encouraging your family to look, take pictures, and appreciate, but DO NOT touch the protected flowers.

How and Where to See Them

In the winter and spring you can find these flowers all over Israel- but primarily in the center in hilly regions. Some areas that come to mind are Park Adulam, Park Brittania, Park Canada, the forests around Zacharia, and the area around Churvot Chanot and Ein Matta. There are so many more places, but these jump to mind. As the soil changes every kilometer or so, the best way to see multiple type of flowers in one trip is by bike. Every 1 kilometer you could walk, becomes 5 or more with a bike, allowing you to see many more species of flowers across your ride.

Eli Berkovits is a Doctor of Pharmacy and Licensed Insurance Adjuster. He runs the clinical department of a US insurance company, Broadreach Medical Research. He also doubles as a martial arts instructor, an author, and a ski trip organizer, and runs a crypto hedge fund called 4K investments. In his free time he enjoys martial arts, biking, skiing, sailing, scuba diving, snorkeling, spelunking, hiking, swimming, surfing, and hanging with his kids.

Fields of Red in the Ruhama Badlands