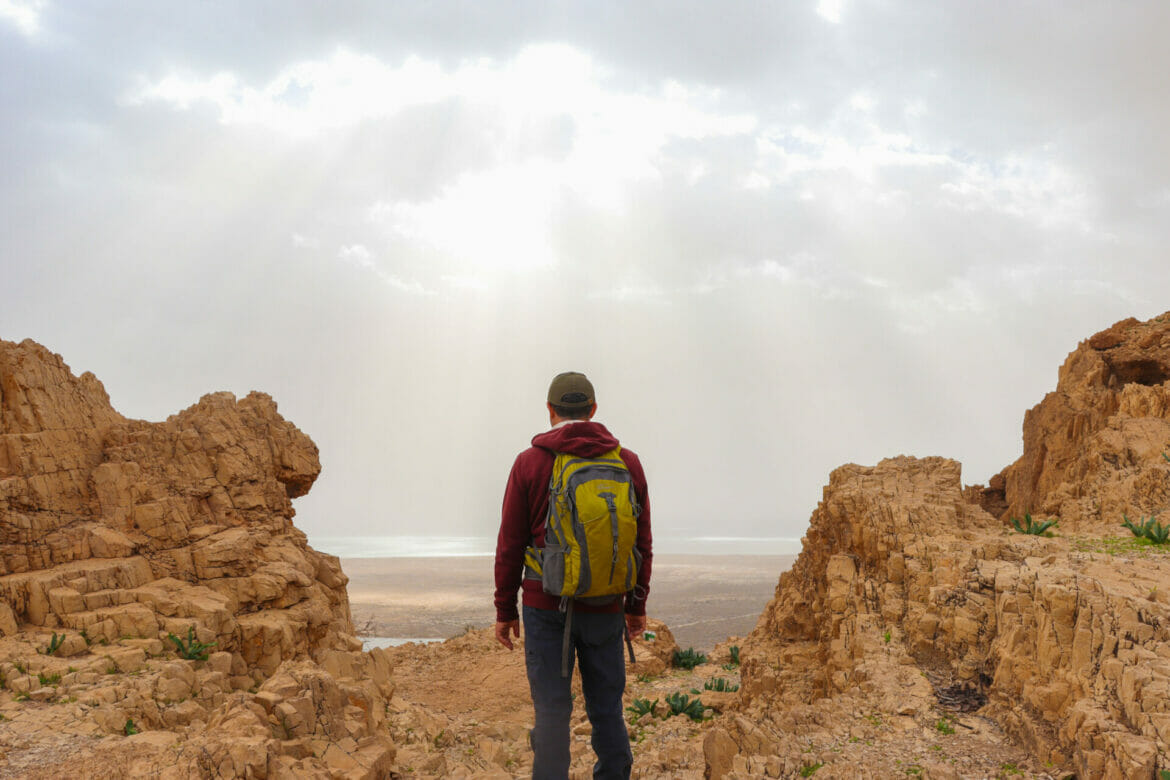 Qumran: It’s well known as the site where the Dead Sea Scrolls were discovered in 1947.  In this secluded spot near the Dead Sea, a treasure trove of parchment fragments was unearthed in a series of caves.  These fragments were made up of books of the Bible, tractates on Law, and pieces of the Apocrypha.

On further analysis Qumran was found to have been inhabited by a group of Essene Jews during the Second Temple period. These Jews kept themselves separate from what they believed to a be a corrupt society. They formed their own small community, with strict attention to law and ritual purity.

A visit to Qumran is fascinating, but up until now, it hasn’t been much of an attraction for nature lovers.  But recently, the Parks Authority opened up a new trail: The Scrolls Trail, a nature walk near the caves of Qumran towards the museum and antiquities.

This past Friday, we decided to head on down to Qumran, to explore the Scrolls Trail.  Word on the street was that winter wildflowers were blossoming along the trail, so this was one of the attractions.  Although the trail was short (it’s perfect for families), we found a way to extend the trail behind Qumran and into the mountains, along Nahal Qumran to the west.

Hiking the Scrolls Trail and Nahal Qumran in this way made for a full morning adventure, full of all sorts of different attractions.  Here’s how we hiked in and around Qumran one Friday morning in the winter time:

We got out of the car near Kibbutz Kalia and found our way onto the Scrolls Trail.  From the get-go, the trail was well marked and evenly paved with wooden steps.  Along the way were useful signs, explaining the history of Qumran and the people who lived there.

The day was an extremely hazy one.  Across the main road, we could barely make out the Dead Sea, usual glowing turquoise in the sun.  Through the wind and the light dust, all we could really see were the massive cliffs that towered over us on the other side.  We reached the blue green crossroads and followed the blue trail out towards the lookout to the Qumran caves.

I thought it was neat to see Qumran in this way.  As opposed to parking and walking into a museum, we could see one of the actual caves where scrolls were hidden right before our eyes.  Seeing the landscape, jagged and rugged, we could better imagine what the lives of those who lived there may have been like.   We read everything there was to read, peeked in at the caves, and continued along the Scrolls Trail towards the ancient Qumran settlement.

The trail became a little more rugged at this point, but nothing too challenging.  We walked up and down over some rocks, noticing the blossoming flowers on the side of the path.  These flowers were surprising in the otherwise barren desert terrain.  But they were not plentiful, nor extremely colorful, as we had expected them to be from the pictures on the Parks Authority website.

Still, they were worth stopping for.  We took a few photos, then continued through the haze towards Qumran, walking along the path next to the cliffs.

Before long, we reached the National Park museum.  Since we were still early on in our hike that day, we decided to save the relaxing part for later (ie: museum, display, movie), and continue along the green trail into Nahal Qumran.

Past a Flood Zone and into the Mountains

We followed the green trail up into the cliffs.  Along the way, we passed by a massive stream bed, clearly washed out with force during the winter rains.  Just as we neared the stream, we heard a booming voice over a loudspeaker from very far away, addressing the “two people hiking on the cliffs.”  The Parks Ranger was warning us not to rappel into Nahal Qumran that day, as there was a risk of flash floods.  We gave him a thumbs up and continued over the Nahal and on a tough ascent up into the cliffs.

Somehow, we hadn’t expected such a tough climb.  But we were happy for the surprise.  We climbed over craggy rocks, past the green undergrowth of long expired squill flowers.  Every once in a while, we stopped at some viewpoint or another, surprised by how invisible the Dead Sea was under the cloud of winter fog and dust.  We could just barely make out the water in a glint of sunshine.

We ascended past caves and over rock ledges, until we were walking right alongside the stream from up above.  From this perspective, we could really imagine what sort of lives the ancient Jews of Qumran must have lived.  Here, they were isolated between a salt sea and a river that only flows in the wintertime.  Their cisterns must have gathered the plentiful rainfall that gushed through during rainy season.

Eventually, the trail took us away from the road and deeper into the mountains.  We found a nice flat spot to sit down and look out over the Nahal while we ate breakfast.

Something about that spot was even more dramatic under the cloudy sky.  The riverbed gleamed a soft purplish white, framed by brown, jagged cliffs on either side.  As it snaked through the valley, pools of reflective water gleamed from within.  These gavim, or standing pools in English, were formed by trapped rainwater rushing through the canyon.

From our spot up there, we could see birds swooping down, from one cliff to the next.  A gentle breeze blew in our faces, making me shiver a little despite the hot cup of coffee in my hand.  It was beautiful up there.

We sat there for a long time, taking in the quiet desert scenery.  Then another group of hikers showed up, which was our cue to pack up our bags and continue on our way.

More of the Same

From here, we continued the climb up along the green trail.  It was fun terrain to hike on, and we were above the stream bed the whole time.  We climbed until we reached a wide, flat section, almost as dramatic as the cliffs had been just moments before.

It was getting late in the day, and we still wanted to visit the Qumran settlement itself.  We picked a random spot on the trail and turned back the way we came, retracing our steps down the jagged cliff edge into the valley below.

After a few kilometers of descending, we were back at the crossroads, with Qumran National Park right before us.  We headed into the building, swiping our Matmon Card on the way, and entered the film and museum.

While the film would probably be quite interesting for anyone who didn’t know much about the story of Qumran, we opted to skip it and continue through the museum.  The museum was cute, but mostly full of replicas, with only a few genuine items (sandal straps, a basket handle) to examine.

Leaving the building, we went out to explore the Qumran settlement itself.  This is the place where the Essenes lived and gathered.  It was outfitted with ritual baths, writing rooms, a kitchen, a dining room, and more.  We explored the site in the rain, and then returned to the Scrolls Trail to head back to the car.

Taking Qumran to the Next Level

Our journey that day had been much more interesting than our past visits to Qumran.  Rather than driving up to a movie/museum, we got to explore the natural terrain that was inhabited by the ancient Jews who lived there.  To me, walking through the area they called home brought the story of the Essenes to life through experience.  We were able to see the caves, the local animals, the water sources, and more as we walked through the place where this devout sect of Jews lived out their lives long ago.

Here’s what you need to know to hike the Scrolls Trail and beyond at Qumran:

1 thought on “Nahal Qumran and The Scrolls Trail”