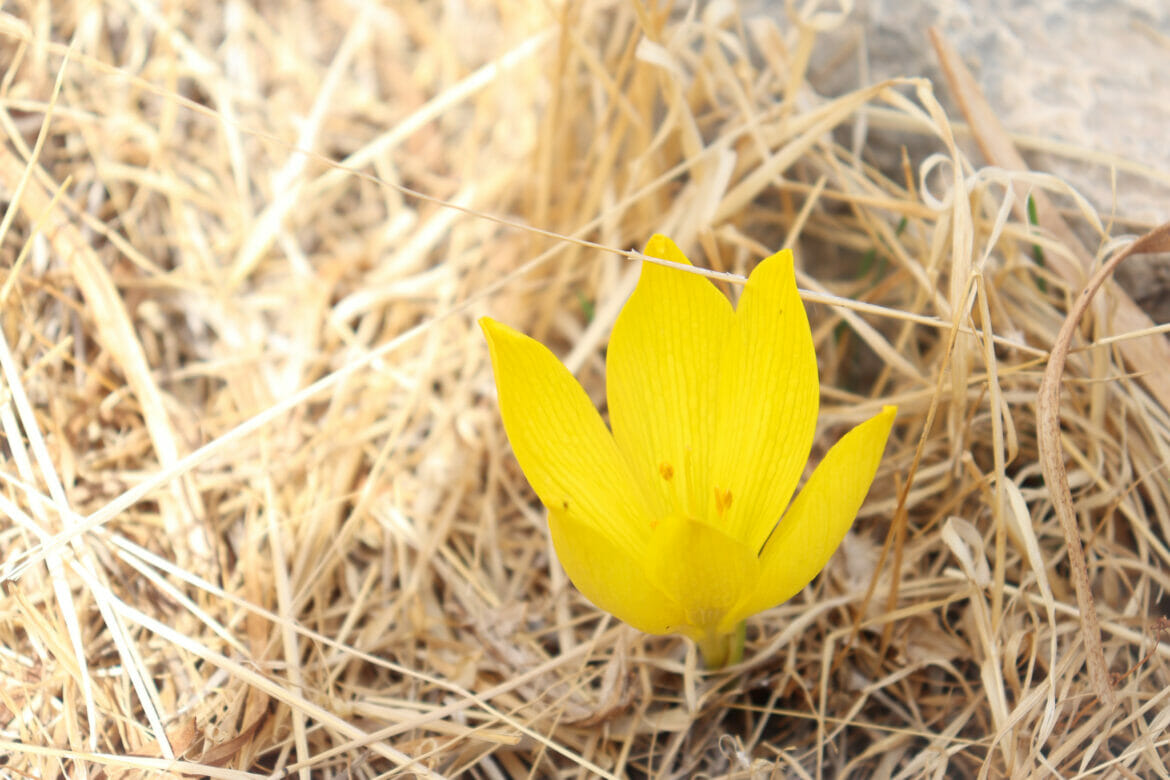 Every year, we hope to see the fleeting flowers of fall: Cholmoniot, in Hebrew.  The scientific name for these mid-sized, bright yellow blossoms is Sternbergia Clusiana.  Colloquially, they are known as Autumn Crocus or Autumn Daffodils.

This year, without much effort, we stumbled upon a fun trail full of these yellow flowers near our home in Gush Etzion.

Last Friday on the fifth day of Hanukkah, we were looking for an easy hike to take with our two little boys.  We had heard that flowers were blossoming on Shvil HaCholmoniot near Kfar Eldad in Gush Etzion, not too far from Nahal Tekoa.  So, we packed up a picnic lunch and headed on over to scope it out.

We found far more than yellow flowers on this little trail in the hills.  It was beautiful out there.  We had a wonderful late morning with our boys: climbing rocky ridges, flower peeping, discovering ancient ruins, and taking in all the beauty.  We even saw a few animals on the trail.

It was a great mini excursion into nature.  Here’s what we saw on Gush Etzion’s very own Cholmoniot Trail near Kfar Eldad.

Popular in the Middle of Nowhere

After driving through the small town of Kfar Eldad, we pulled up to the trailhead at the end of a long narrow road.  There were eight cars parked right there, so we knew that we would not be alone.

This was lucky, because all of the other hikers we met that day were lovely and fun to be around.  We were greeted by one long haired, baby-wearing couple who had just finished scouting for yellow flowers.  They advised us that there were many blooms to be found, but that the blossoming was not as thick as it had been in other years.

An older couple advised us next, “You’ll see them.  Just keep your eyes peeled for yellow!”

We set out into a narrow stream bed, framed on both sides by hills of layered rock.  Our search had begun.

The Thrill of Discovery

Within a few minutes of walking, we had discovered our first flower.  It was shockingly yellow, much larger than I had expected, and far more beautiful.  From the pictures I had seen, I kind of expected a diminutive blossom, just barely popping out of the earth.  I guess these fleeting flowers are just hard to take pictures of.

These Cholmoniot were large and breathtaking.  I tried to get my own wonderful photos (and failed).

My boys were very excited to have made a discovery so quickly.  They climbed the hills from flower to flower, trying to find the largest patch of blossoms.

This is a Nice Hike!

After locating Cholmoniot on the ground, we were free to wander through the valley, stepping over flat stones to climb from one level to the next.  It was a beautiful day, and we were in a beautiful place.   It was hard not to enjoy this walk through the hills on a late fall morning.

After a while, we reached a breakaway trail (painted white, clear, white).  In Israel, these trails usually indicate some sort of sight to see: a cave, a lookout, a spring, or something else.  We followed the trail up the cliff, climbing hard to reach whatever awaited us at the end.

Soon, the trail markers ended.  We searched to find whatever it was we were supposed to see.  The view from up there was quite pretty, but there was nothing to indicate that we had arrived at some sort of special place.

Then, right nearby, I noticed three gazelles springing over the rocks.  I pointed them out to the kids.  And we all watched with awe as they hurried away from us, towards a hidden spot in the hills.

I guess that’s what we had climbed up for.

Chilling in a Valley

After that, we continued along the trail, still spotting flowers here and there.  At this point, my kids were more focused on finding a place to stop and eat lunch in the shade.  And soon, we found it: a rocky ridge hung over a large flat stone in the valley.  We got ourselves situated and settled in to relax for a little while.

While we sat there, we contemplated the stone layers all around us.  There were some that looked really fun to climb.  Unable to hold back, I left our picnic to climb one very appealing ridge.  Layers of rock made perfect hand and foot holds as I ascended.  And guess what I found up there? More Cholmoniot flowers.

After lunch, we had to decide how to complete this trail.  Should we head back the way we came, as all the other hikers did?  Or should we continue to follow the trail and try to complete some sort of loop out there?

Of course, all the kids wanted to explore some more.  We continued to follow the (non-official) painted trail markers further into nature.

This was a good decision for us, because soon, we found ourselves looking at a series of ancient ruins.  There was an old cistern and water gathering device, used to catch rainwater as it poured down into the valley.  We saw caves (but after we saw a non-poisonous snake in one of them, we decided not to go inside).

And best of all, we discovered an ancient structure that was actually part of the hill.  It looked quite similar to the old monk abodes in Nahal Tekoa, right nearby.  We wondered who had lived in this valley, a long, long time ago.

All in a Day’s Fun

Eventually, we completed the trail and found our way back to the car.  It had been a wonderful morning.  In only a couple of hours, we had seen rare flowers and elusive animals.  We had gone rock climbing and discovered ancient ruins.

The Cholmoniot Trail of Gush Etzion was a perfect mini-adventure full of fun surprises.

Here’s what you need to know to hike the Cholmoniot Trail in Gush Etzion:

Questions? Have you hiked the Cholmoniot Trail in Gush Etzion? Let’s hear about it in the comments!