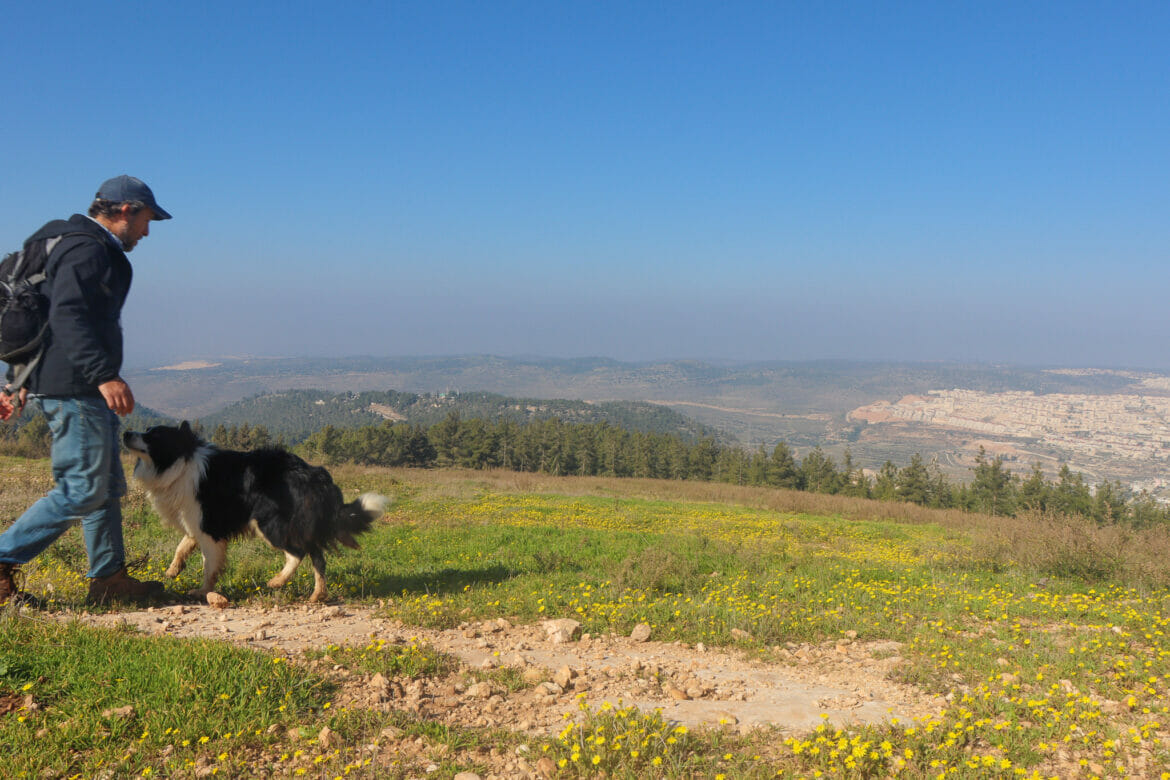 This past Friday, we were short on options.  With a lockdown still officially in force, we were going to have to hike close to home.  The bright side?  There was still one, long Gush Etzion trail that we hadn’t explored yet.

Of course, we weren’t expecting big things out of a local trail.  How amazing could this trail be if it was right in our backyard and we had never heard of it?  But we were completely wrong.

The trail from Derech Avot around Rosh Tzurim was spectacular.  As we hiked, we wound our way through thick forests, over rolling, flower covered hills and through dense plant life.  Along the way, we even got to explore a freshwater spring in a cave and visit two of the clearest pools I’ve seen in the area.

I’m so happy that we were finally compelled to hike this trail.  This hidden gem (well known by local cyclists!) is one I’ll be returning to again and again.

Here’s how we hiked this circular trail down Derech Avot and around Rosh Tzurim:

The trail began on Derech Avot, one of our favorite places to walk in Gush Etzion.  Derech Avot is an ancient pathway that’s been in use since the time of our forefathers (hence its name, translated as Path of the Patriarchs).

There are many cool things about Derech Avot.  For one, ancient Roman milestones can be found at intervals all along the trail.  These milestones remain from Roman times, when this was the major road in the area.

Since this pathway is so important, it has also been well cared for by the local authorities.  Pretty plaques with Biblical excerpts can be found near lookouts and little picnic areas.  As you walk along the trail, an incredible view of the rolling mountains all around is your constant companion.

There’s also a natural rock-climbing wall on Derech Avot.  And further along, towards the end of the trail, an ancient ritual bath sits next to an old cistern.  In this area, grape vines, figs, and almond trees grow wild, perfect for grabbing a snack in early fall.

Off the Beaten Path

As we neared the end of the Path of the Patriarchs, we broke off the main path and made a right onto the Gush Etzion Cycling Trail, a well-marked path that leads to all of the most beautiful spots in the area.  At first, we started off in relatively familiar terrain: we passed grape vines, donkeys, and olive orchards as we descended towards the valley below.

But as we crossed through the valley and began to ascend up the other side, the scenery began to change.  Soon, we were in a forest of pine trees.  The narrow trail led right through the thick of things.  And when we reached the remains of an empty pool, now filled with pine needles, we knew we were at our coffee spot.

Green moss grew on grey rock at our feet.  The ground was a bed of pine needles, punctuated by cyclamen blossoms that grew between the cracks.  We sat under a canopy of pine branches, but through the tree trunks we could see the valley below, filled with neat vineyards, golden in the morning sun.

We kind of couldn’t believe that this isolated and beautiful spot was close to home.  Just for this spot, the trail was deemed well worth it.  We vowed to return with our kids at some point in the near future.

The Best of All Worlds

After a long coffee break, we moved on, continuing to wind our way up through the trees.  We were quite certain that once we reached the end of this small forest, the level of beauty would rapidly decline.  But we couldn’t have been more wrong.

First, we passed by a grove of cherry trees, branches naked in mid-winter.  We imagined how beautiful this area would be in the springtime, when pink blossoms cover the trees.

From here, we entered into an area thick with greenery.  A lush carpet of leaves covered the ground at our feet.  Just beyond the trail, we could still see out to the impressive views of rolling mountains all around.  It felt like we were in a quiet little paradise.

After completing this part of the trail, we were on the lookout for Ein Tzurim, a spring right outside of the community of Rosh Tzurim.  We knew we were close when we saw a little trail descending towards us from up above, along with painted picnic benches and clusters of trees.

A minute later, we reached the spring.  Two neat, square pools sat side by side, filled with crystal clear water.  There were flowers growing along the side, along with a swing and some tables under a tree. It looked like a great place to spend a morning.

Just above the two springs, stone steps led up into a cave.  We followed them…and discovered something incredibly cool.

Down a moss covered tunnel, we reached a large open cavern filled with perfectly clear water.  Droplets clung to the rock walls, as they filtered down towards the pool below.  It was an awesome discovery.

After this, we thought we were done with discoveries.  Surely, there couldn’t be anything left to find on this backyard trail?

But yet again, we were wrong.  The trail now led us through rows of vineyards (imagine what that must look like in the fall!), towards a wide-open area of rolling hills, covered with miniature yellow flowers.

In the distance, we could clearly make out Gush Etzion and the surrounding towns, giving us an interesting new perspective on the topography of our local area.

But also…the flowers.  We took a break to let our border collie prance through the fields as the sun shone down on us from a bright blue sky.  Then we followed the trail into another thick forest.

This woodland was even more beautiful than the last.  Pine trees on one side, oak on another, the forest seemed to stretch out in every direction.  Sunlight filtered gently through the trees, creating a magical glow.

We just walked now, finally accepting the fact that yes, this beautiful area had always been here – we just never knew about it.

Eventually, the path through the forest ended.  We were back in familiar Gush Etzion terrain – vineyards and rocky pathways.  We followed the trail up to the Three Boys Promenade and Ezra Shwartz Lookout, crossed the road back to Path of the Patriarchs, and returned to the trailhead.

This Rosh Tzurim loop trail had been a real adventure. It didn’t feel like a humble backyard trail.  Instead, it felt like a long wander through a secluded and beautiful natural area.

If there’s anything this hike taught me it’s this: Leave no stone unturned.  Try new trails (especially local ones!) as often as you can.  You never know what type of hidden beauty you might discover right in your own backyard.

Here’s what you need to know to hike this trail from Derech Avot around Rosh Tzurim:

Questions? Have you hiked this trail? Let’s hear about it in the comments!