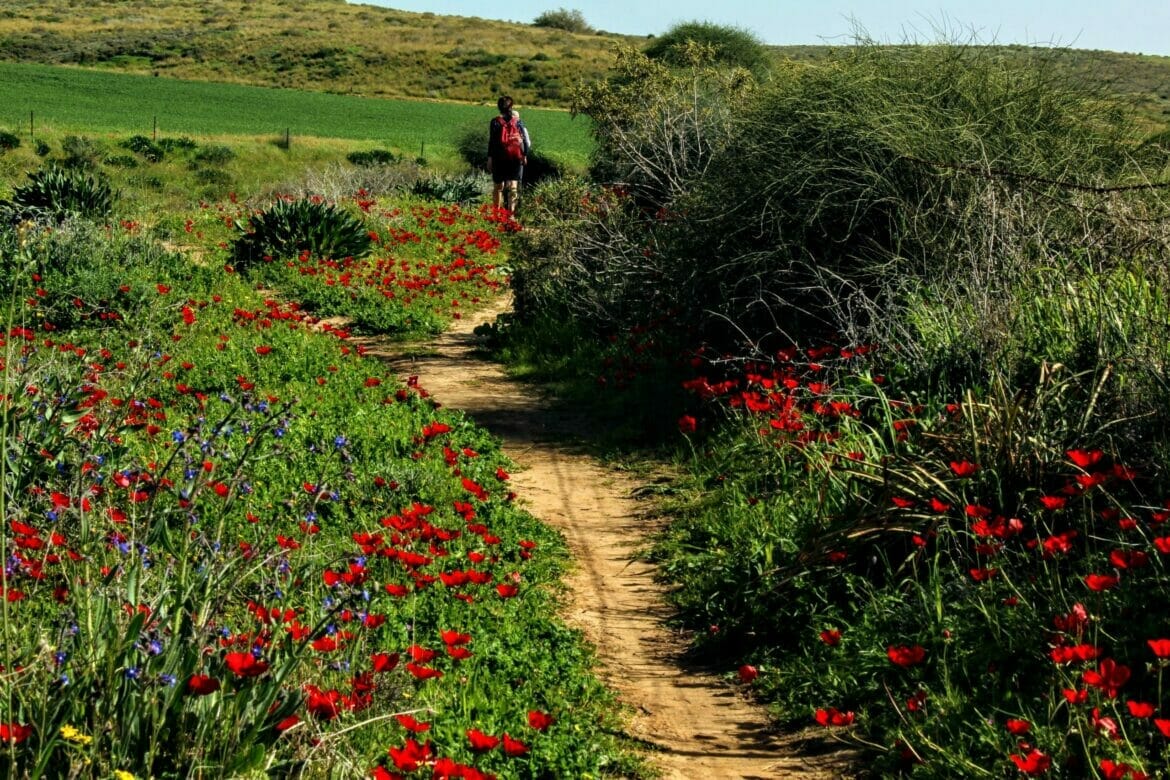 It’s not springtime.  By any calculation.  But the scenery in Israel tells a different story.

In Israel, mid-winter is when fields of red anemones bloom, along with hundreds of other types of flowers.  And the best place to see these islands of spring in the middle of winter is undoubtedly the Northern Negev.

From Be’eri Forest to the Badlands of Ruhama, the flower season is in full swing.  The Parks Authority has even come up with a quintessentially Israeli “Festival” to celebrate this frenetic blooming: Darom Adom.

We wanted to see the flower fields in full bloom, but didn’t want to get lost in the crowds.  And we also didn’t want to drive an hour just to frolic in a patch of poppies before turning around to go home.  So, we attempted to put together a hike along what we believed to be a lesser traveled road through the flower phenomenon.

Our hike didn’t go exactly as planned.  In fact, though full of flowers and super beautiful, our walk turned into a sixteen kilometer trek that was definitely not family friendly.  But we still managed to figure out a few different ways to hike the path we took to create options of any length for anyone looking for a walk through the blooming back-country.

Here’s what we saw on our hike in the Ruhama Badlands.

Begin with a Bang

As we emerged from our car, we were pleasantly surprised.  Not only were there lots of red anemones right off the highway, the parking lot was pretty empty at that point in the day.  There were no people around.  We started on our way, down the green trail and into the sea of flowers.

It was still early in the morning.  And the light that filtered through the soft clouds rested gently on a field of tightly closed, red anemones.  In between were soft pillows of yellow and bright pops of purple.  We had arrived.

We immediately began to wonder – if it was this beautiful here, would it be as pretty through the rest of the trail?  There was nothing to do but set off to find out.

We followed the green trail past the bulk of the flowers, and into green fields.  There were still flowers around – yellow, and red, and light purple little ones.  And the area was still uniquely beautiful – different than other scenery we had seen anywhere in Israel.

Occasionally, groups of bikers began to pass us by.  But we were pleased by the general quiet on the trail we had chosen.

At the first crossroads, we made our next attempt to take the road less traveled.  Rather than turning to continue the green trail or take the blue trail, we took the path on the right (straight ahead) onto an unmarked trail (which later became the black trail).

This path was wide and unshaded.  Luckily for us, it was still early in the morning on a cool day.  We appreciated the warm sun for most of the time.  The scenery around consisted of tall green grasses and unmarred blue skies.

After passing a sign indicating the first water pipeline in the Negev, we turned back onto the green trail.  It was a welcome escape from farmland into tree lined paths, peppered with all sorts of flowers along the way.  Now that we were back on a marked trail, though, bikers started flying through again.  We moved aside each time they came by.

But they were an incredibly friendly lot.  “Boker Tov!” fell like an echo upon our ears, as one after another wished us good morning when they passed.

We decided that it was time to stop.  And there were lots of spots to choose from.  From open patches of flowers to shady forest floors, there was no shortage of beautiful picnic areas.  We opted for something in between – half shade, half flowers – and settled down for a break.

Although we were still on a main biking thoroughfare, it was otherwise quiet and peaceful out there in the Ruhama Badlands.  The only sounds was the buzzing of the bees, flitting from flower to flower.  It was incredibly serene, and very beautiful.

And the occasional groups of bikers just added a bit of brightness to the atmosphere.  My eighteen year old daughter decided then and there that her new aspiration was to become as cheerful as those friendly cyclists.

See the Forest, for There Are No Trees

After our break, we continued on towards the next part of the hike – the Dorot Forest.  Up until now, the hike had been surprisingly shady and sheltered.  But once we reached “the forest”, that all changed.

We thought that perhaps the Dorot Forest would be an interesting part of an otherwise flat and flower filled hike.  But it was actually quite the opposite.  It wasn’t flower filled, but it also was lacking what makes a forest a forest – trees!  There were a few here and there, but not enough to make it a woodland.

So, we plowed our way through on the green trail, hoping that the scenery would improve when we circled back and headed in the opposite direction.

Which it did.  As we wove our way back on the green trail, the scenery began to be beautiful and varied.  The path itself got narrower and narrower (and harder to follow), and we wound our way through tall grasses and wildflowers.

Another few kilometers and we found ourselves in a thick and shady storybook forest (not Dorot Forest, just another part of the Ruhama Badlands).  There were patches of red flowers peeking out from the sunlight.  The trees hung over fields of grass in a magical canopy.

We emerged into the sun and onto a flat patch of grass.  Then we followed the trail into an (open) enclosure full of cows.  They seemed pretty harmless, and eventually, the path emerged on the other side.

What Are We Celebrating Again?

After quite a while off the beaten track, we finally made our way back to the main thoroughfare of the Ruhama Badlands.  We began to see occasional cyclists again.  And the blossoms that lined the path grew tall and purple, or yellow, or white.  Red petals peppered the hills.

At this point we started thinking:  we had been on lots of hikes lately all over Israel and had seen lots of beautiful flowers.  What made this area of the country special enough to warrant a flower festival in its honor?

I think that what makes the Northern Negev unique during mid- winter blooming season isn’t just the sheer abundance of flowers.  It’s the topography of the area – flat and rolling green hills.  When this type of land is overlaid with masses of red anemone, the red tinged landscape is different than everywhere else.

We continued for several more kilometers, meeting walkers who had ventured past the flower filled parking lot.  A little further, and we were at the first part of the trail.  Sixteen kilometers and four hours later, the red flowers we saw at the beginning had finally opened up to greet the shining sun.

It may be true that the area right near the trailhead was the most anemone filled part of the whole trek.  That’s what all the visitors come to see.

But what can’t be found right off the highway is the peace and tranquility that comes with losing yourself on a long trail.  And discovering the variety of wildflowers and spectacular scenery that makes up the heart of the Ruhama Badlands.

The trail we took was admittedly long and complicated!  But don’t worry.  I’ve created two Google Earth Maps for you to follow.  If you really want to go on a sixteen kilometer trek, follow the long and circular one.  It will take you a while, but you’ll get a really beautiful and quiet day out of it.

If you’re up for a shorter hike of any length, follow the one directional path in the second Google Earth Map.  It’s mapped out for six kilometers, but you can take it as far out and back as you’d like.  Just turn around when you think you’ve had enough.

Once you get past the first main area of flowers, the color calms down for a little while, then explodes again a bit further on in the trail.  It’s worth it to keep going a little further to see the variety of color.

If you just want a nice day out frolicking in the flowers, this is still a good spot to choose.  There were plenty of people there at the end of the day, but I don’t think the scene compares (people wise) to the one at Be’eri, where the National Parks Authority is also holding the Darom Adom Festival.  It is still reasonably quiet, and there are endless fields of beautiful flowers to picnic in right at the beginning.

This hike should be good from the end of January to the end of February.  After that, I’m guessing that the bulk of the blooming has passed.  So, try to make it here at that time of year.

Don’t forget to read my guide to the navigational features in this post!

You can try to follow the marked up trail map (from Amud Anan), but there are lots of places to get lost.  I strongly recommend using the Google Earth map (especially if you’re taking the long hike!)

Questions? Tips for other hikers? Leave them in the comments below! 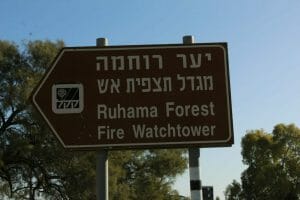 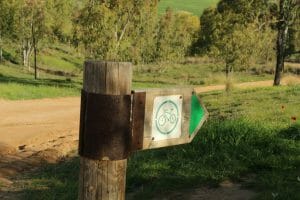 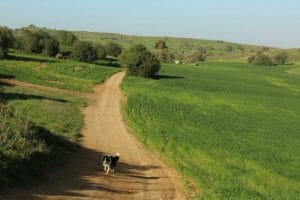 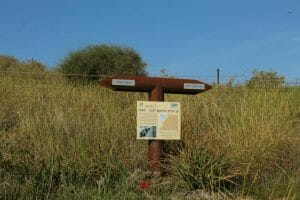 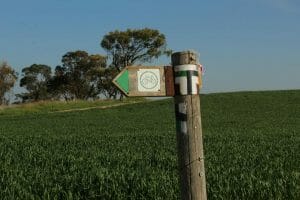 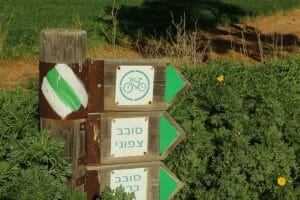 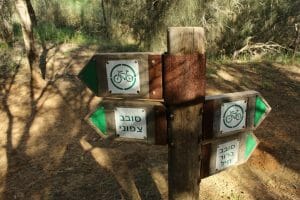 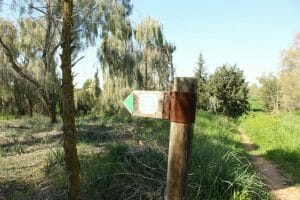 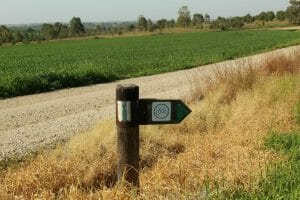 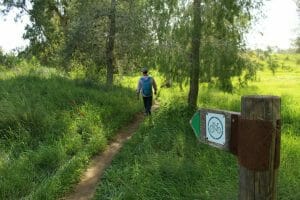 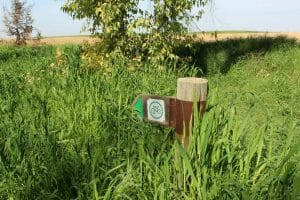 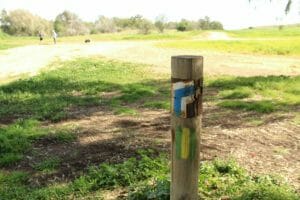 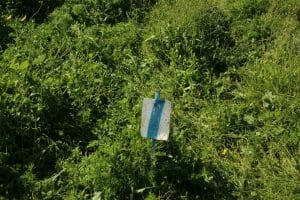 2 thoughts on “Fields of Red in the Ruhama Badlands”