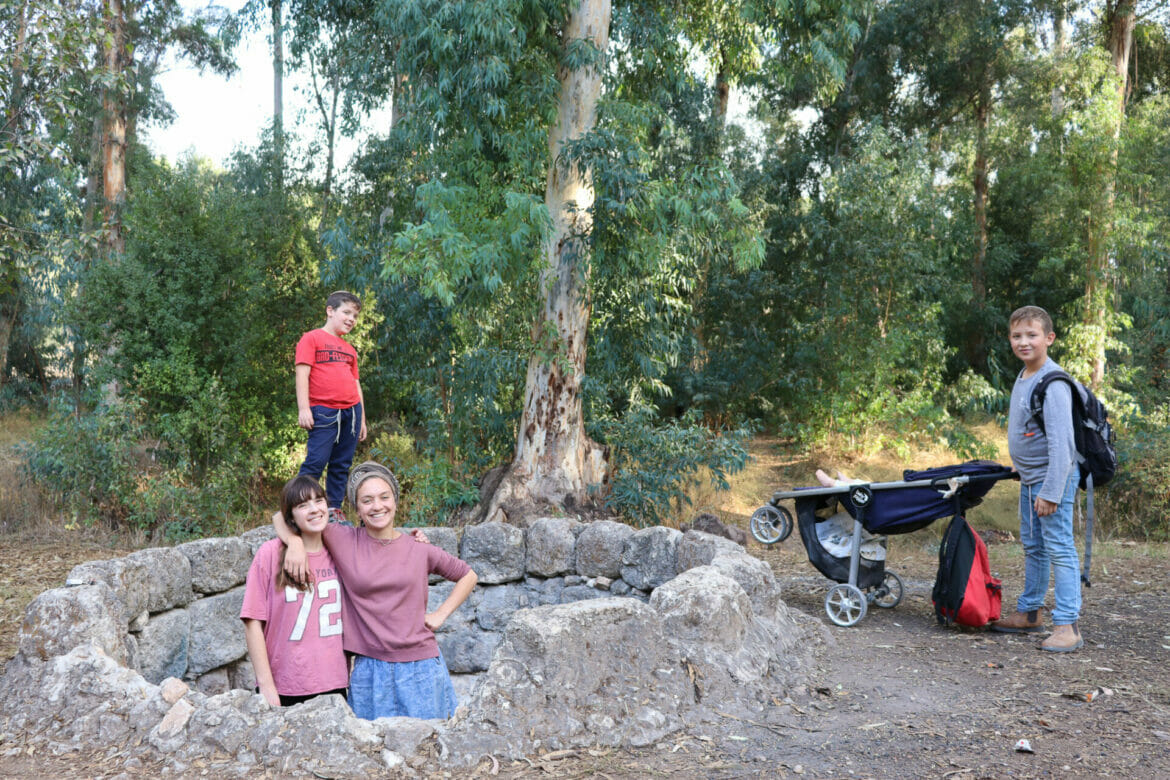 Last week, my son had an army ceremony at the Hulda Memorial, marking the completion of his training and the beginning of his career as an official soldier.  This huge ceremony includes hundreds of spectators: parents, family, and friends of the soldiers.  But, there is one small problem: the Memorial at Hulda has just a tiny parking lot, not nearly big enough to accommodate the cars of all of the visitors.

So, knowing his parents well, my son came up with a suggestion: Arrive a few hours early, park with ease, and go for a hike nearby!  It was a great idea. We were more than happy to take advantage of the opportunity to discover a new, family friendly loop trail in Hulda Forest, a place that we’ve been wanting to visit for a while.

Kibbutz Hulda played an important role in Israel’s modern history.  The Hulda Farm was established in 1909, with the purchase of land from the Saidun tribe.  During the Arab riots of 1929, the farm came under attack, but managed to survive.  In 1948, before Israel’s War of Independence, Hulda was the last Jewish held settlement on the way to Sha’ar Hagai and Jerusalem.  Because of this, it served as a major supply point for the Jews of Jerusalem, isolated and under siege.

The stroller-friendly loop trail that we planned through the forest would hit several historical points, including the (temporarily closed) Herzl house.  Since the trail was relatively short (only about 3 kilometers), we knew that our kids would enjoy the time in nature and hoped that they would learn a bit of history along the way.

It turned out to be the perfect hike for an afternoon – easy, interesting, and very beautiful.  We had a great mini-excursion into Hulda Forest before our son’s ceremony.

How We Didn’t Hike It

Okay, so the truth is that we had to get over to the hike from the parking lot at Hulda Memorial.  So, we actually followed a dirt path and hopped onto the loop trail at Hulda Forest right in the middle, completing the hike slightly out of order.  But since that description won’t be helpful for most people, I’m going to pretend that we started at the hike’s natural starting point near Herzl House.  Are we all okay with this minor deception?

A Bit of History

Upon our arrival at the main area of the park, it was clear that there was a lot to see.  A long, palm tree lined pathway led to the area’s main attraction, the Herzl House.  Before checking out this part of the trail, we decided to take a look at the grave and memorial of Ephraim Chizik, who was killed during the Arab riots of 1929, while covering his comrade’s retreat into the safety of the farmhouse.  He was buried in that spot a few days later.  A beautiful memorial stands above his gravesite, depicting Ephraim along with two other fighters from Hulda who were killed in battle in northern Israel, in Tel Hai.  The memorial was inaugurated in 1937.

We left the memorial and headed over to the Herzl House.  Unfortunately, it was temporarily closed for renovations, but we still enjoyed looking at the old-fashioned looking structure of the building.  The old farm and stables of Kibbutz Hulda had been turned into a parking lot and restrooms.

Picnic in a Forest

Another appealing feature of the main area of the park were the plentiful picnic tables, scattered throughout the tall trees of the forest near Herzl House.  It was lunch time, and my kids were, as usual, ready to eat.

So, instead of doing the normal thing and settling down on a picnic bench, we found a large flat rock near the picnic area and ate lunch there.  It was beautiful and peaceful in the forest, and we enjoyed our quiet time out in nature.

After lunch, we continued on the wide, flat path through the trees.  There are lots of forests in Israel, but Hulda forest was an especially beautiful one.  We pushed my granddaughter’s stroller along, enjoying the breeze blowing through the trees and the music of chirping birds.  Everyone was happy with the easy pace of the walk.

Soon, we reached the next important point on the trail – an old well.  When Jews first came to Kibbutz Hulda, they relied on purchased water from an Arab owned spring right on the outskirts of the settlement.  With the unrest in the region, they soon realized that relying on an outside source of water was a bad idea.  So in 1910, they dug a very deep well, 189 meters deep to be precise.  They did find water, but it wasn’t drinkable.  Eventually, the well collapsed, leaving only the little rim around the top.

We continued along the trail, noticing unusually shaped olive trees growing in abundance.  These trees were not fat and gnarly like typical olive trees you see around Israel.  Instead, they were tall with flowy branches, full of ripe purple olives.

As we reached the end of the grove, we noticed a sign.  This grove of trees called Hurshat Tel Hai had been planted in 1920 in memory of fallen warriors at Tel Hai, one of whom was from Kibbutz Hulda.  I remembered learning about this battle on the Israel Trail at Tel Hai months earlier.  Yosef Trumpeldor , an early Zionist hero, was amongst those who died in the incident.

It’s All About the Water

As we neared the end of the loop, we reached one final historical site: the giant water cistern, built in only three weeks to solve the water problem for besieged Jews of Jerusalem in 1948.

This cistern was built to take in water from Central Israel and channel it through the emergency Shiloah pipeline to Jerusalem. At the time, the Mekorot water company received special recognition for their efforts A walk around the cistern revealed old photos and documents printed on informational plaques.  It felt like we were in a miniature museum in the outdoors.  My kids enjoyed learning about what it was like to live on 10 liters of water a day (the amount allotted to Jerusalem residents during the siege).

With our visit to the water cistern, our hike around Hulda Forest was complete.  The loop ended right by the Herzl house where we began the trail a couple of hours earlier.

With that, we were ready to head off to my son’s ceremony – marching band, awards of honor, and all.  Our time spent in Hulda Forest was a perfect preamble to this celebration of Israel and the people who sacrifice to protect and sustain our Land.

Here’s what you need to know to hike this loop trail through Hulda Forest:

Suitable for all seasons.

You can check online to see if Herzl house is open at this link.

Questions? Have you hiked at Hulda Forest? Let’s hear about it in the comments!

Get Your Feet Wet: HaMeginim Forest and Varda Spring

10 Off the Beaten Track Trails for Families