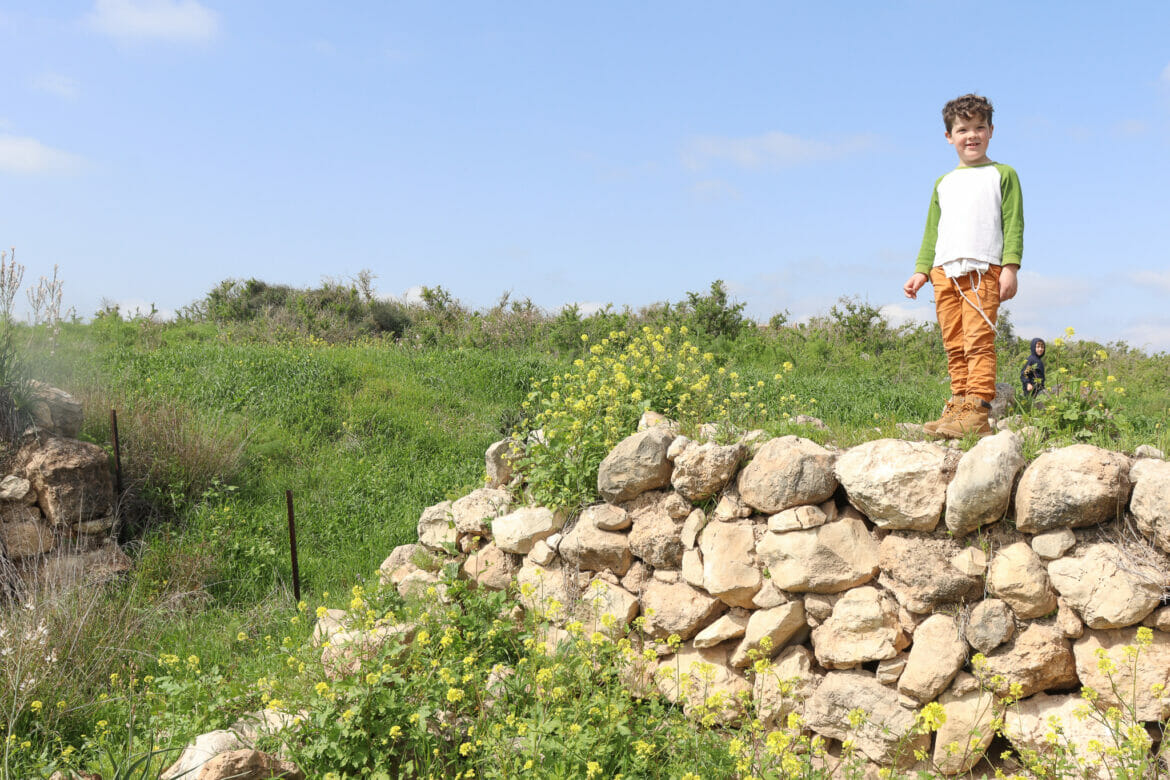 Almost every year for at least a decade, we used to make an annual trip to Givat HaTurmosim (Tel Socho) on the day after Purim.  The kids always had the day off of school.  A trip to the top of a purple-flower covered hill had always seemed like the perfect way to welcome the transition to spring that was about to begin.

But now, our kids are older and like new adventures.  We’ve been to Tel Socho many, many times (twice this year!).  So, this Shushan Purim, we were on the lookout for a different sort of kid-friendly hiking trail.

As every Purim holiday reveler knows, the day after can be a little slow-going.  Our kids were definitely on the low energy side after so much merry-making the day before.  We knew we needed a flexible hike that didn’t require any major physical exertion.

Tel Lachish is a National Park in Southern Israel near Kiryat Gat.  The park is centered around an ancient Biblical city, one conquered by Senacherib, King of the Assyrians during the First Temple period.  There’s a lot to see and learn at Tel Lachish.  But we also knew that at this time of year, we would get to experience plenty of green growth and blossoming flowers along the trails at the top of the hill.

Not only that, but Tel Lachish is actually located right on the Israel Trail.  We figured that it wouldn’t be too hard to combine a hike along the trail with a visit to the ancient ruins atop the Tel.

And we were right.  The hike was perfect for our two youngest boys, who were so happy to be out in nature and sunshine.  We got to explore an incredibly cool ancient site while enjoying the sweet smell of spring along the trails.

Here’s how we went on an easy hike around Tel Lachish:

It Begins with a Battle

We pulled into the parking lot and saw the Tel Lachish Visitors Center, a brand-new building recently erected by the Parks Authority as part of an effort to renovate and improve Tel Lachish.  Unfortunately for us, the visitor’s center had not yet opened.  So, we walked on by towards the Tel.

Despite the closed visitor’s center, Tel Lachish itself had been vastly improved (since the last time I was there, about a year or so ago).  There were clear signs at the foot of the hill, explaining the history of Lachish and its defeat by King Sennacherib of the Assyrians and the Babylonian King Nebuchadnezzer during the conquest of Israel.

One of the signs pointed out what was left of a giant siege ramp, built by the Assyrians to penetrate the thick walls of the fortified city.  Ultimately, this stone ramp had resulted in the successful defeat of the impenetrable town.  The siege ramp is the oldest of its kind in the entire world.  It is the only known Assyrian siege ramp in existence.

Okay, There were Also Flowers

Of course, my kids expressed interest in the particulars of an ancient battle, but they were also just happy to be out frolicking amongst some flowers.  There were abundant mustard flowers, along with tall purple blossoms (which they love to suck the nectar from).  In between the clusters, red anemones grew haphazardly.

It was a beautiful day, sunshiny and pleasantly cool.  This was very different from the scenery we left behind at home, where the fog and clouds gathered over our mountaintop town near Jerusalem.  It was good to be outdoors.

We began our ascent up the ramp towards the city’s main gate.

Scoping out the City

The nice thing about visiting Tel Lachish is that there were so many signs explaining each and every stop along the way.  As we approached the city, we passed by an artist’s rendition of what the ancient town must have looked like. At the main gate, the pictures included descriptions of the ancients who used to gather at the city’s entrance: prophets, kings, lawmakers, and other important people.  We learned about the importance of the walls around the city and that the ancient residents used to lock the gates of Lachish at night.

Next, we proceeded through the marketplace.  True, there wasn’t much left of the original stalls from thousands of years ago.  But the ancient site had been reconstructed. This gave us a better idea of what the place looked like when it was a hustling and bustling city.

We passed through the market and went to peek in at the palace, once home to the governor of Lachish.

Just beneath the palace, many “thrones” stood in a line, depicting the lives of every king of Judea, from the first to the last.  Each throne’s size corresponded to the length of the king’s rule: the longer the rule, the higher the chair.

Inscribed on each chair were Biblical verses about the rule of that particular king.  My kids really enjoyed finding the two or three kings that had become rulers of the Land at less than ten years old.

From here, we continued up to the palace, the highest spot at Tel Lachish.  Right away, my boys fell upon a display that depicted the names of the different ancient cities in four types of writing: Modern Hebrew, Arabic, English, and Ancient Hebrew.  Using a decoder, we had to figure out which Modern Hebrew names corresponded to which names in Ancient Hebrew.

Next, it was off to another lookout, where we could see out to the surrounding cities and to the rest of Lachish below.  We all decided that it would be pretty cool to live in a palace at Lachish, at least at this time of year.

A Tree, a Well, and a Picnic

From the palace, we followed the path down to the one prominent tree on the hill towards a deep well.  We told our boys the story of the tree: parents used to send their children to gather water from the well and hurry past the “evil tree” which was supposedly possessed by demons.

The well itself was quite deep and full of nesting pigeons.  We unsuccessfully looked for the right size stones to drop in, then continued on our way. We passed a Canaanite sun temple to a field of flowers, deemed the perfect place to stop for a picnic.

And it was.  In the tall grass amongst bright yellow mustard blossoms, we absorbed all of the beauty of Southern Israel in March.  We felt quite alone and immersed in nature in that spot, although we were right in the middle of what was once an important city.  There’s a season for everything.  Once a center of urban life, Lachish was now a quiet hill between farmlands and nature trails.

Taking it Home on the Israel Trail

After that, we continued along the “Long Trail” around Tel Lachish towards a campsite. This was also the crossroads for the Israel Trail.  Then, we took a nice long walk there, picking asparagus, sniffing flowers, and enjoying the tall trees and rich nature.

It was the perfect outing with kids on a late winter day.  Tel Lachish National Park offers an excursion into fascinating history and cheery beauty just off of the Israel Trail.

Here’s what you need to know to hike the trail at Tel Lachish:

Questions? Have you been to Tel Lachish? Let’s hear about it in the comments!