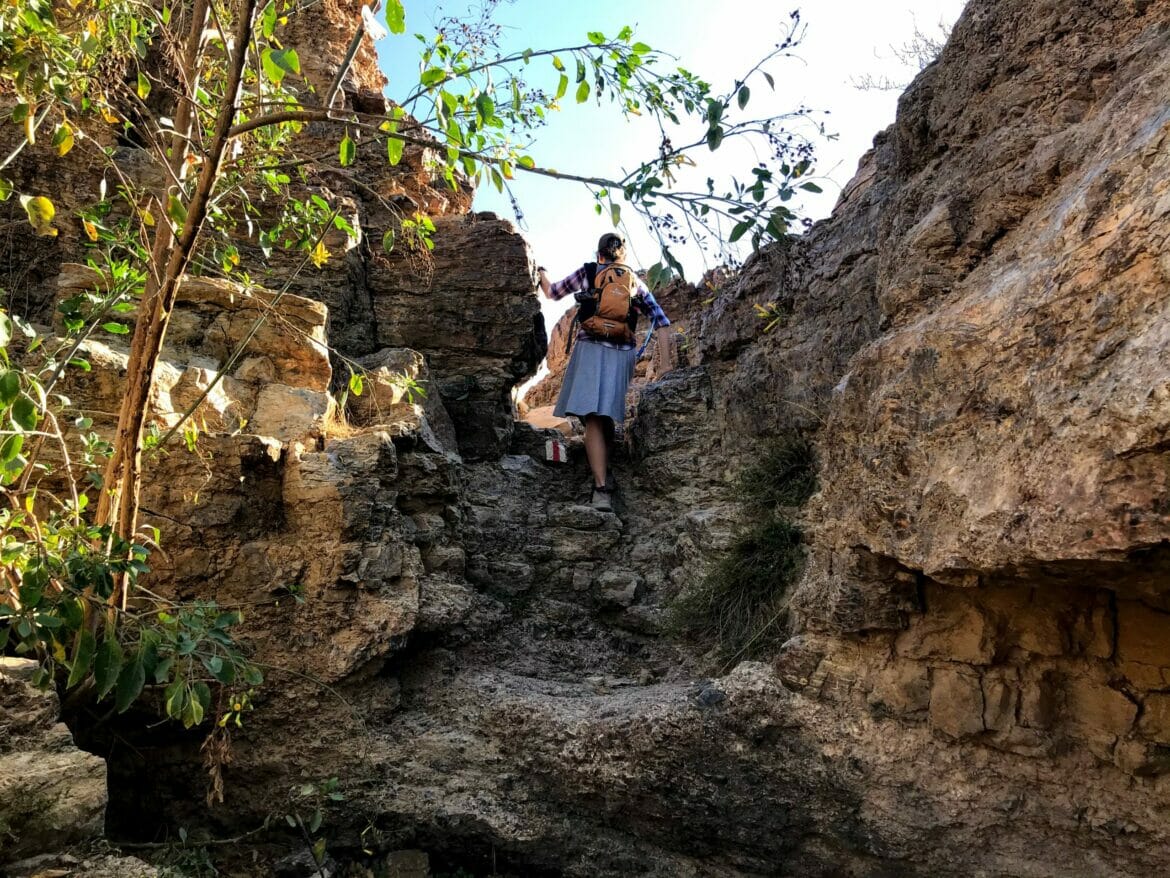 The desert: people think it’s sparse, bleak, and desolate.  But one thing I’ve learned hiking through desert trails in the past few months is that the desert has its own unique beauty.

Sometimes, it can be found in desert mountains and craters.  Other times, it’s the white rock of a dry riverbed.  And there are times when the beauty of the desert lies in the fact that it’s absolutely devoid of the noise of life.

Right near the city of Arad lies a long and lonely trail through this kind of sparse beauty.  True, there are some interesting landmarks on the trail (a few wells and Rahamim Cistern), but for the most part, this 7.5 kilometer walk is about wandering in the silence under the wide open sky.

When we went, the sky was blue and cloudless, the sun shining overhead on a short autumn day.  Pictures were a problem (bright midday sun, almost no variety in the landscape), but the time on our hike was well-spent: reflecting on poignant events of the week, taking it slow, and just plain having fun.

Here’s how we experienced this walk out to the Rahamim Cistern:

If there’s one thing this hike had a lot of, it was piles of rock.  We set out on the blue trail into a sea of mid-size tawny stones.  It wasn’t easy walking.  Rather, it felt like we were balancing on piles of icy snow, placing our feet carefully so as not to slip.

The landscape as it spread out in hills and waves made us want to laugh.  It looked like someone had taken a hammer to a nearby mountain and left mountains of large pebbles behind.

We followed the blue trail, admiring green desert plants on the way.  And we noticed a few holes in the ground filled with water – clearly the old wells which we were supposed to be a feature of the trail.

Even More Off the Beaten Track

A few kilometers in, we noticed a dead-end breakaway trail.  We couldn’t figure out what the breakaway trail was leading towards.  But I thought it might be a cool cliff formation in the distance.  So, we followed it.

We never did figure out what we were supposed to see on that trail.  But the cliff formation was still there, looking like a little white sofa jutting out from the side of the mountain.

We were tired and hungry, so we decided to climb the side of the cliff and have breakfast there.

It was conveniently shady, and full of great little nooks and crannies for placing our coffee cups.  As we ate, we gazed out on the sea of nothingness in the distance, then noticed one man clothed in white wandering along the trail.

He must have also felt like this trail was a good place for quiet meditation.

After breakfast, we made our way back to the blue trail and continued through the desert.  There wasn’t much to see until we reached the next “hot spot” on the trail – an old wall forming the side of the cistern.

As expected, the cistern was not full of water (no rain yet this winter).  But it was full of tall reeds, indicating that water does indeed collect here for much of the year.

At the cistern, we made a right onto the red trail, which the map said would lead to Nahal Hesed, a dry riverbed.  We had no idea what to expect, but we hoped for some interesting rock formations to climb on.

Cozying up Next to the Riverbed

The red trail took us to a riverbed all right.  But instead of the usual white walls and boulders, this riverbed was shallow, with walls of claylike rock.

And the trail didn’t lead through.  Instead, it wove back and forth over the dry channel.  For most of the time, we walked alongside it.

That was okay.  We could see this hike was going to be different than our most recent desert adventures.  And there was nothing wrong with a long, quiet walk in the middle of nowhere.

A Bit of Bouldering

After Nahal Hesed, the red trail got close to the city of Arad.  On the one hand, this was a much less beautiful part of the hike (too close to electric wires and pipes to retain that isolated desert feel).

But on the other hand, there were some massive boulders which made great places to climb.

After an uneventful walk, we were ready for a little bit of fun.  We climbed to the top of two boulders and took out the drone, ready to take some great pictures.

Since it was early afternoon on a cloudless day, the harsh midday sun didn’t cooperate with the camera.  So, the pictures were less than spectacular.  But we still had fun taking them!

Climbing Back to Civilization

From here, we followed the trail through more interesting terrain, up some rocky channels towards the city.  And back in Arad, we walked through a pretty city park and returned to the car.

So, was the Rahamim Cistern hike magnificently beautiful?  Not exactly.  Instead, this meditative walk near Arad expressed a quiet and subtle, sparse desert beauty.

Here’s what you need to know about this hike:

Don’t forget to read my guide to the navigational features in this post before you hit the trail?

Questions? Tips for fellow hikers? Let’s hear ’em in the comments below!

Nahal Salvadora – Desert Adventure for Everyone