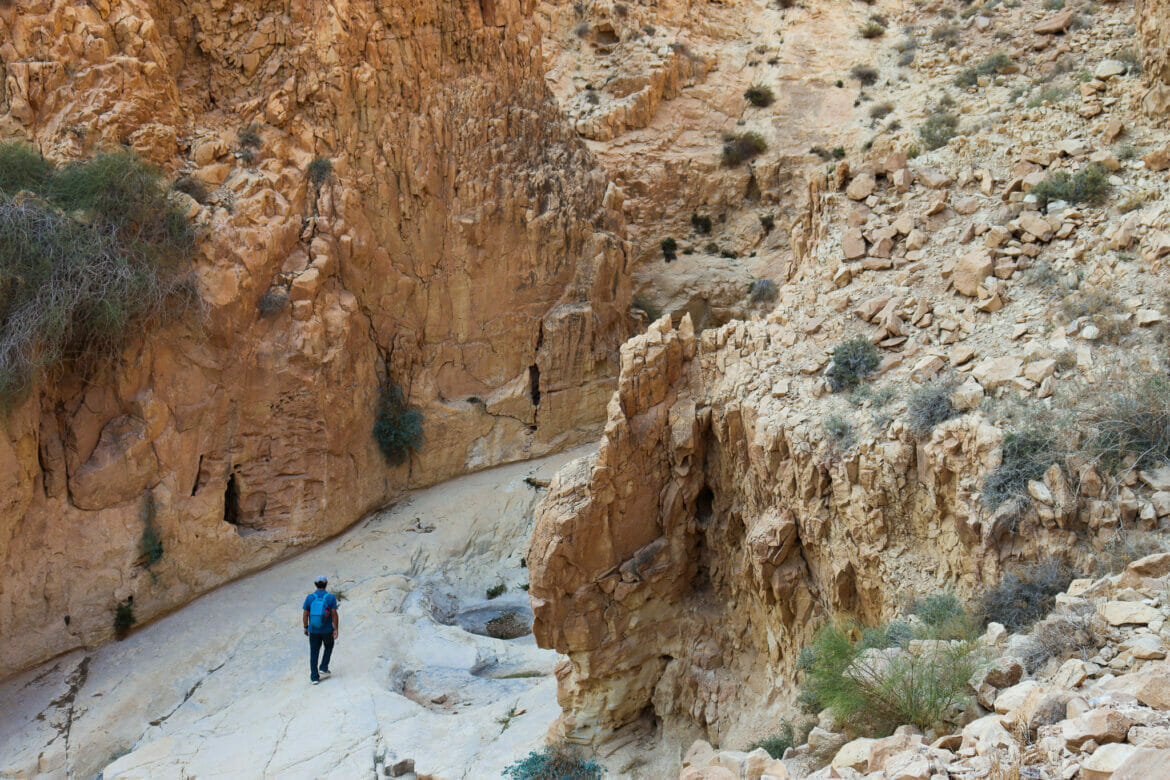 The desert.  Whenever I think about it, my first thought is of sand storms and desert mirages.  In the past, my associations with the desert were of a punishing and monotonous environment.

But the more I hike in the Judean Desert, the more I realize that nothing could be further from the truth.

Rather than boring, the desert is interesting, full of a million hidden surprises.  And to those of us who take short sojourns in the desert, it’s not punishing.  Instead it is soul touching; it nourishes inner peace.

After last week’s foray onto a desert trail near Arad, we felt that we just had to go back.  So, when it turned out that we had time for a hike this week, we knew where we were headed.

The problem was that there are dozens of Judean Desert hikes to choose from.  After a bit of map research, we settled on a twelve- kilometer trek that began in the city of Arad and ended at the tail end of a desert canyon.

This one-way hike would take us from city, through open desert hills, to a dry riverbed.  We hoped that we’d get a real feel for the natural topographical variety of the Judean Desert over the twelve kilometers.  And we were also eager to try out a one-way hike, since we knew that a taxi ride back to the starting point was just a phone call away.

Here’s what we saw on our trek from Arad to Nahal Abuv:

It’s a Beautiful Day in the Neighborhood

We parked in a residential parking lot and left our car.  The walk to the trailhead was a three-minute stroll up a city street.

Right there on the road was a trail marker indicating the starting point of our long desert walk.

Luckily for us, it was a beautiful day: the weather was warm with a refreshing breeze.  The sky was a perfect shade of blue, and the morning sun illuminated the wide-open expanse of desert sand that stretched out all around us.

After a short walk, we reached a lookout.  From here we could see the miles of rolling dunes that we were about to wander into.

And wander we did. We followed the green trail down, down, down, at a steady pace over small rocks and dust.  After a bit of a walk, we reached an acacia tree, blown sideways by the persistent winds.

Here, we paused to make sure we were on track, then followed the red trail across the highway and towards the next part of the trail.

What Have We Gotten Ourselves Into??

Remember all that down, down, down?  Well once we crossed the highway, we were following a green trail again.  But this time, we were going up, up, up.

We climbed slowly and steadily, the heat of the sun beginning to feel uncomfortable as we pushed uphill.  Most pressingly for us, we plunged forward in an attempt to escape the noise of cars and trucks swooshing past on the highway down below.

As far as we were concerned, the best part of desert hikes is the quiet and solitude.  So, we weren’t too keen on seeing signs of civilization as we climbed.

After a long walk uphill, we reached the first stopping point – an ancient fortress from Roman times.

I wondered aloud how they managed to find water in the middle of the desert.  Then my husband pointed out a giant cistern in the center of the stronghold.

This fort was a welcome distraction from the highway in the distance and the tough ascent we were tackling.  But it was getting late and we were getting hungry.  So, we pushed forward in hopes of finding a perfect picnic spot further along the trail.

I See a Desert Mirage

Unfortunately for us, perfect picnic spots weren’t so easy to come by on this part of the trail.

We continued on uphill, over more little stones.  Behind us, the views out to the surrounding area were pretty spectacular.  But up ahead, all we could see was the giant hill that loomed before us.

As hard as we tried to keep a close eye out for green trail markers, there were times that we lost the trail, working uphill, then back downhill to find the path again.

One final push and we reached the best lookout of the whole trail, all the way at the tippy top of the tallest desert hill.  It was windy and cool at this viewpoint, also placed on the remains of an old Roman fortress, then turned Ottoman, then turned British Police station.

We threw down our bags and called it breakfast time at 11:30. This lookout may not have been a perfect picnic spot, but we needed a break.

After coffee and the most delicious sandwich I’ve ever eaten, we were ready to get going again.  In fact, sitting in the shade at the top of that breezy hill, I was downright chilly, and ready to move forward.

We continued to follow the Israel Trail and green trail, which quickly changed to Israel Trail and blue trail.  Then we veered left onto the black trail and saw the Nahal Abuv parking lot up ahead.

Following the black signs down into Nahal Abuv, I wondered what the rest of the hike was going to be like.  So far, this walk had been very atypical of our trips into the desert.  Would Nahal Abuv give us that quiet desert solitude we were hoping for?

We descended on the black trail, hopping over stones and trying to stay balanced.  Soon, we reached the very bottom of the hill.

And an alabaster desert canyon lay ahead.

Back on Another Planet

Smooth white rock filled the bottom of the canyon, so soft that it reminded me of foam on top of the ocean.  Up ahead, craggy, rocky cliffs lined the sides of the riverbed in shades of earth, red, and gold.

It was already past midday, so the sun was right overhead.  But the canyon walls reached up into the sky creating pockets of shade inside of Nahal Abuv.

We proceeded forward, thankful to have reached unbelievable desert scenery at last.

For the next five kilometers, we were treated to a combination of beauty and silence.  We had also reached the “Etgari” part of the trail, which meant that we got to use our whole bodies to balance, climb, and make our way down rock waterfalls through the canyon.

It definitely wasn’t challenging in the way that the earlier part of the hike had been.  Instead, it was the fun kind of challenging, the challenge of where to place your hands and feet to make the best descent.  Nahal Abuv was like nature’s very own climbing gym, free entry for all.

As we hiked, we passed a hundred landscapes, each part of the canyon showcasing a different rock formation.  We saw empty pits in the ground, waiting to collect rainwater and form winter pools.  And we admired the way the sun lit up different parts of the riverbed.

I wished to be back in Nahal Abuv at sunrise to photograph the pink light on the canyon walls.

After only a couple of hours, we found ourselves climbing again, up and out of Nahal Abuv.  And then we were back in the civilized part of the desert, a highway clearly visible right up ahead.

We waited for cell phone service to appear, then called a number we had filed away for a local taxi service.  Ten minutes later, we were in a cab headed back to Arad.

This trek proved it yet again: hiking through the Judean Desert is anything but boring.

This long, challenging hike from Arad to Nahal Abuv is not for everyone. But if you don’t mind a really good workout, and if you like sticking to desert trails that are closer to civilization, this is a great choice.

Make sure to keep a really close eye out for trail markers and study the map as you hike! Otherwise, you’ll probably get lost. There are some trail markers that aren’t easy to find.

The best way to find your way on this trail is to:

1. Study the trail map in the table up top.

2. Look carefully through the gallery of trail markers to make sure you understand which way to go.

3. Use Google Earth to follow our path through the trail as you walk.

4. Always look for trail markers. Don’t wander in the desert! (Note: When you are climbing to the top of the mountain, if you accidentally end up on the blue trail instead of the green trail, you won’t hit the lookout at the top. But you will eventually reach Nahal Abuv on the blue trail too.)

Wear a hat and sunscreen, and bring plenty of water. You’ll be exposed in the desert and this trail is not easy.

You could also hike Nahal Abuv all on it’s own. There’s a parking lot at the beginning and a place to park at the end.

I don’t recommend this trail for dogs or children.

Trail map from Amud Anan. See the table up above.

Questions? Have you hiked this trail? Give me a shout out in the comments below!

2 thoughts on “From Arad to Nahal Abuv”