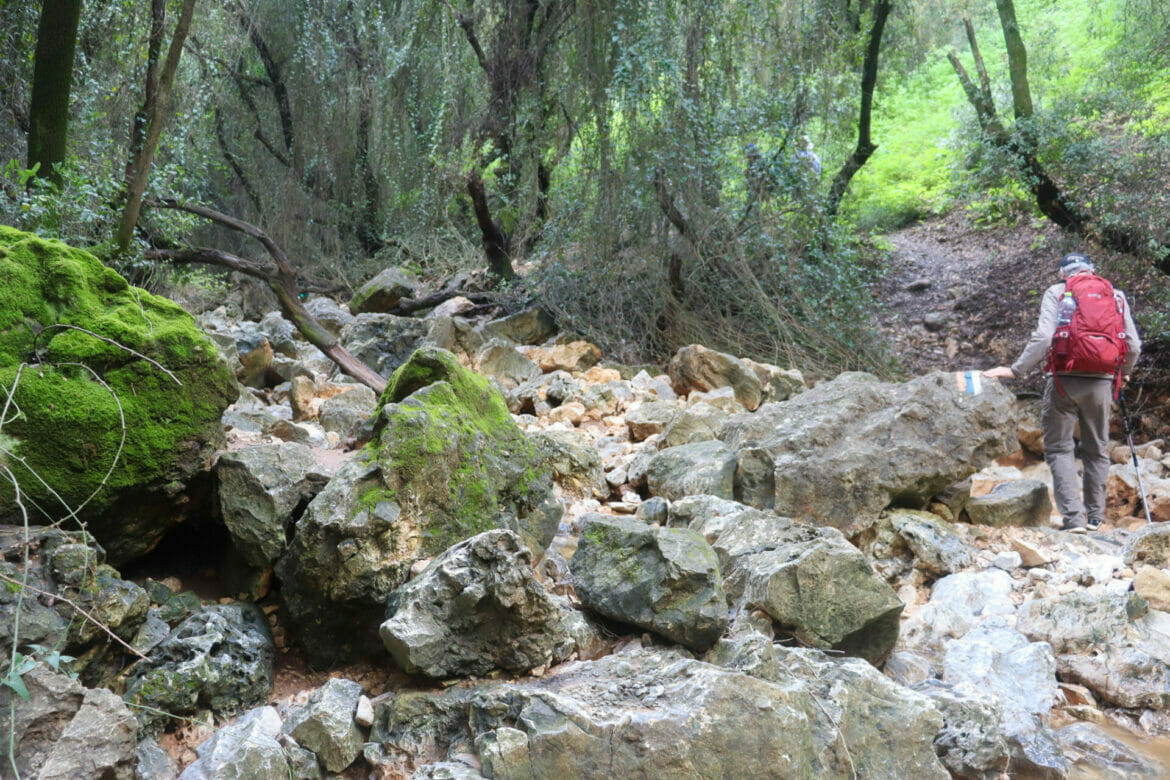 A few months ago, we completed the second segment of the Israel Trail with a group of hikers.  Each stretch of this trail feels like such an accomplishment.

I’m beginning to feel like we are officially on a long journey. Already, I’ve noticed how my perception and understanding of Israel’s terrain has changed, just by hiking continuous segments of the trail one after the next, north to south.

Although the second segment was more challenging than the first, I found the hike to be truly awesome.  In one long day, we went from flower filled paths up on the hills down to a twisty, shady stream bed.  After climbing all the way through the shadows (with some surprises along the way), we headed back up and out over more flower filled terrain, along to the end point at the Keren Naftali lookout.

It was a great day.

Because we hiked right after heavy rains, the trail was more challenging than it normally would be.  But, to me, this made the hike a thousand times more fun.  And the wildflowers on the path in the month of March were truly spectacular.

Here’s how we hiked the second segment of the Israel Trail, from Nekikei Yiftach to Keren Naftali:

After a long ride up to Northern Israel, our whole group was ready for some movement.  But rather than jump right into the trail, we began with a pre-hike stretch, guided by one of our hikers.  Then, limbered up and ready to get in touch with nature, we strapped on our backpacks and headed out on the trail.

The very first part took us through Nekikei Yiftach, a collapsed cave turned rock playground.  There, we met some local women who showed us how to collect wild leeks from the rock crevices.

We proceeded over the rocks and onto a flatter path where we took it up a notch with some steady, fast walking.

On this part of the trail, at that time of year, the scenery was truly stunning.  We were surrounded by wildflowers: red poppies, yellow mustard, daisies, and more.  Pretty soon, we reached a part of the trail that looked out on gorgeous views to plains and farmland.  In March, everything was lush and green.  The clouds hung low in the sky on that cool morning.  It was beautiful.

Next, we proceeded along through the flowers until we reached a perfect first stopping point, in a patch of shade beneath some trees just off the trail.  Here, we sat for a while, listening to our guide, Ben, tell us about the area and just shooting the breeze.

After a nice break, we were ready to plow forward again, through a flower filled path towards Nahal Kadesh just up ahead.

We followed the signs for Nahal Kadesh, which slowly transitioned from a gentle downhill into a sharp climb.  We made our way down on grey boulders towards a beautiful stream bed below.  And luckily for us, there was water in the stream!

Normally (even during the winter time), Nahal Kadesh is completely dry. It’s a fun place to climb over typical “Nahal” scenery under a canopy of trees, over river rocks, grey boulders, and tree roots.

But after several days of heavy rains, there was a river flowing right through the valley, adding an extra element of challenge to an already challenging trail.  We hopped from one rock to the next, trying to avoid submerging our feet in the stream as best we could.  And we succeeded (for the most part).

Although some members of our group had trouble negotiating the terrain on this part of the trail, no one could deny that the scenery was absolutely beautiful.  It was shady down there, full of gnarly trees that let glowing rays of sunlight through their dense branches.  The mixture of white and grey rocks along with twisty tree roots created an unusual pathway.  We treaded carefully.

Much to everyone’s surprise, we eventually reached a couple of spots with hand hold rungs.  To get through this segment of the Israel Trail, we were going to have to climb up wet rocks, slippery after the recent rains.

With everyone helping one another, we all managed to get through the obstacles in beautiful Nahal Kadesh.

Back to Regular Life

Once we had climbed out of the Kadesh Stream, we were back to our typical terrain: flat and flower filled.  But not for long.  After a couple of kilometers we reached a different sight on the trail – a monument to 22 soldiers who fell in the War of Independence.

To note the location, Ben told us the story of brave young Palmach fighter Dovid Tzerkesky, and played a beautiful song about him.

On the Israel Trail, you get real exposure to the things that make Israel beautiful: varying terrain, rich history, and also ancient beauty.  This is one of the things that is so neat about hiking the trail (especially with a knowledgeable guide).

Next, we proceeded along until we reached a tomb called Nabi Yosha.  Here, Ben explained how some thought this to be the tomb of Yehoshua Bin Nun, but it was unlikely to be so.  We explored the inside of the intricately beautiful dark structure.

Onward Until the End

After that it was smooth sailing, down a narrow pathway through a mix of shade and sun.  Of course, it helped that we were hiking in the early springtime, when plentiful wildflowers and cloud cover made the trail all the more pleasant.  We passed overgrown kelach plants, their tall stalks rising up into the sky and yellow flowers blossoming in clusters.  As one hiker put it, it felt like we were in some sort of fairy forest.

After not too long, we reached the end of the trail at Keren Naftali.  As Ben tried to give one last explanation of the lookout, the crowd gravitated towards the picnic table where wine and cheese were waiting.  They were done for the day and ready to celebrate the completion of the second segment.  We made a toast to our success.

Because of the unexpected challenges, this stretch of the trail had taken longer than expected.  The sun was hanging low in the sky and a cold breeze began to blow.  As the third bottle of wine was finished, the last crumbs of cheese were eaten, and everyone sought refuge and rest on the minibus.  It had been a great day.

The second segment of the Israel Trail was a wonderful hike in its own right.  From flower fields, to a twisty stream bed, to historical sights and more, this hike from Nekikei Yiftach to Keren Naftali was a great adventure.

Here’s what you need to know to hike this segment of the Israel Trail:

Questions? Have you hiked from Nekikei Yiftach to Keren Naftali? Let’s hear about it in the comments!

Lower Hermon Stream – the Other Banias!