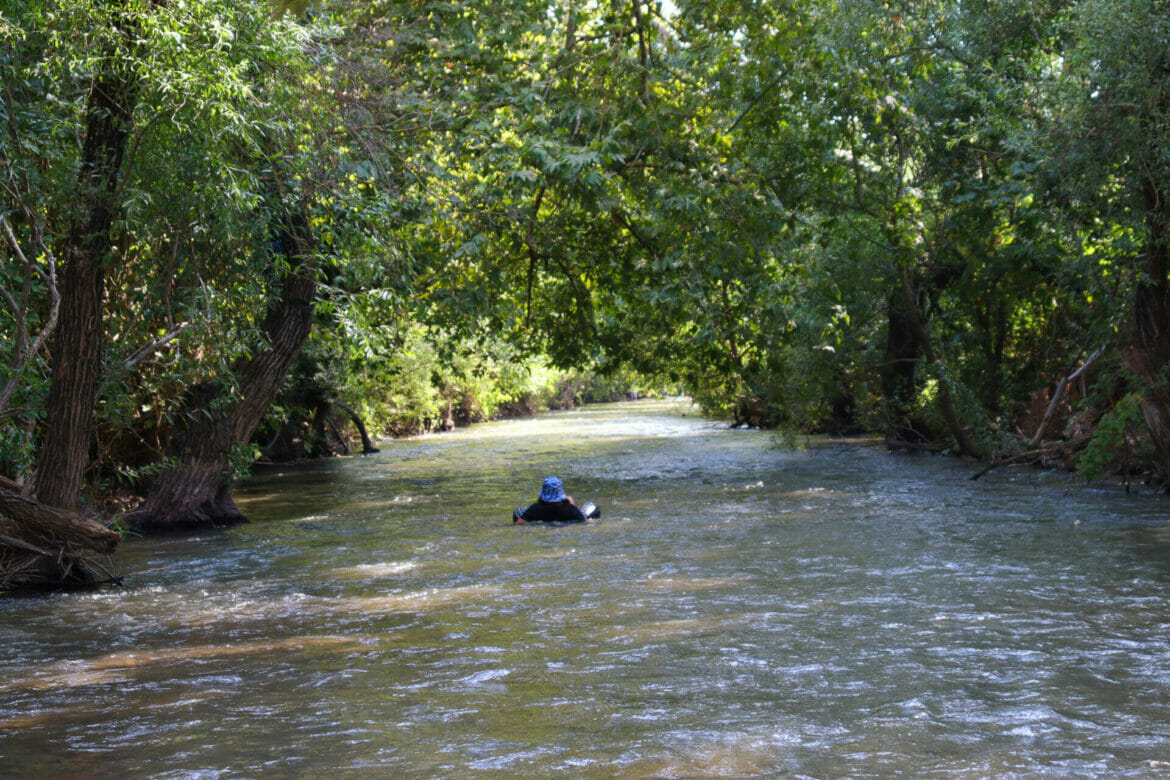 Ah, the Banias!  Most of us are already familiar with the massive waterfall, cooling spray, and general lushness of the famous Northern Israeli river.  But if you’ve ever visited Hermon Stream Reserve/ Banias National Park, you know that you can’t really get into the water – it’s not allowed.

But that giant gushing stream has got to go somewhere.  And it does. The Hermon Stream continues for quite a few kilometers after the National Park.  Drive downstream a bit and you can experience that cool water for yourself.

Last week, we took a trip to Hermon Stream with our kids.  It was a fantastic experience.  The river was cool and refreshing.  The surroundings were rich and green.  It was much like the National Park, except the water was accessible and there were fewer people.  Hiking down the river felt sort of like Majrase – but bigger and better.

Not Geared Up, But Ready to Go

When we arrived at Nahal Hermon, we didn’t really know what to expect.  We reached a big dirt parking lot, with a lot of cars.  It didn’t bode well for the crowd situation.

There were a couple of families heading down towards the stream with inner tubes and floaties.  We, on the other hand, had nothing but our bathing suits and a camera.  We followed the path into the trees and hoped for the best.

When we reached the stream, we made our way down through the reeds and trees.  Low and behold, there was a beautiful gushing river right before us.  We climbed into the crystal cool waters of Hermon Stream.

What surprised us was that there were only a few people in the area around us.  As our kids dunked and splashed in the water, my husband and I tried to get a handle on what this water hike was all about.

On one end, we saw a few people, floating down the river towards us.  One came in a big orange blow up boat.  As they passed, they noticed my camera and asked if I could take a few pictures for them. (No one else was silly enough to bring a camera into Nahal Hermon.)

As we watched them float away, we finally understood why there were so few people in the stream.  The river was long, and people were using the strong current to float down the stream.  So, everyone was dispersed throughout the length of the river.

As we made our way downriver, we noticed that in one spot, everyone was heading towards the shore to get out of the water.  We couldn’t figure out why and started to continue forward.  Then we saw a waterfall up ahead – yikes!

I didn’t think my kids were ready to go sliding down a waterfall, so we climbed back through the reeds and walked along the path to pass the falls.  On the way, we noticed our friends from before, setting up their orange boat right next to the waterfall.

This time, they were going down the waterfall in the boat – could I please take a picture?

We continued along then climbed down into the water over large tree roots, poised and ready to take photos of our fellow adventurers as they spilled over a mini waterfall.

Watching and waiting at the waterfall was enough edge of the seat entertainment for my little boys.  But while we waited, we also took in the incredible sights and sounds of Nahal Hermon.

Little fish nibbled at our toes as they swam between rocks.  Neon blue dragonflies flitted from flowers to reeds.  In the distance, the Hermon Stream continued along under a cool canopy of trees.  The scene was idyllic.

After a few minutes of waiting, the orange boat crashed over the waterfall, its passenger in a fit of glee.  It was like a wet roller coaster ride, but better!

This Place is Incredible

After that, we followed the stream some more.  My little kids really wanted to swim down the stream instead of walking through it, but I was nervous that the current would sweep them away.

For my sanity, my husband started to walk ahead several meters while the kids waited.  Then, he shouted for them to start swimming until they reached him.  They repeated this little exercise again and again.

Nahal Hermon seemed to stretch on forever.  At a certain point, the bigger kids started to worry that the walk back would be too far.  (The little kids didn’t stress – they were too busy having fun.)

We decided to call it a day and climb out of the water.  We we would be back at Nahal Hermon eventually, next time with floaty tubes.

I would have expected the fun to end right there.  But the walk back along the path was kind of incredible.  It was just so beautiful – green grass and trees next to a bubbling stream.  Small groups of people sat along the way, enjoying the little promenade next to Hermon Stream.

As we walked, dripping the whole way, I felt like this would be an incredible place to spend an entire summer day: tubing down the river, hopping out, having a picnic, then doing it all over again and again.

As we said goodbye to Nahal Hermon, we knew we’d return – geared up and ready to spend another amazing day at one of the most fun and beautiful water hikes in Northern Israel.

Here’s what you need to know to hike this trail:

1 thought on “Lower Hermon Stream – the Other Banias!”