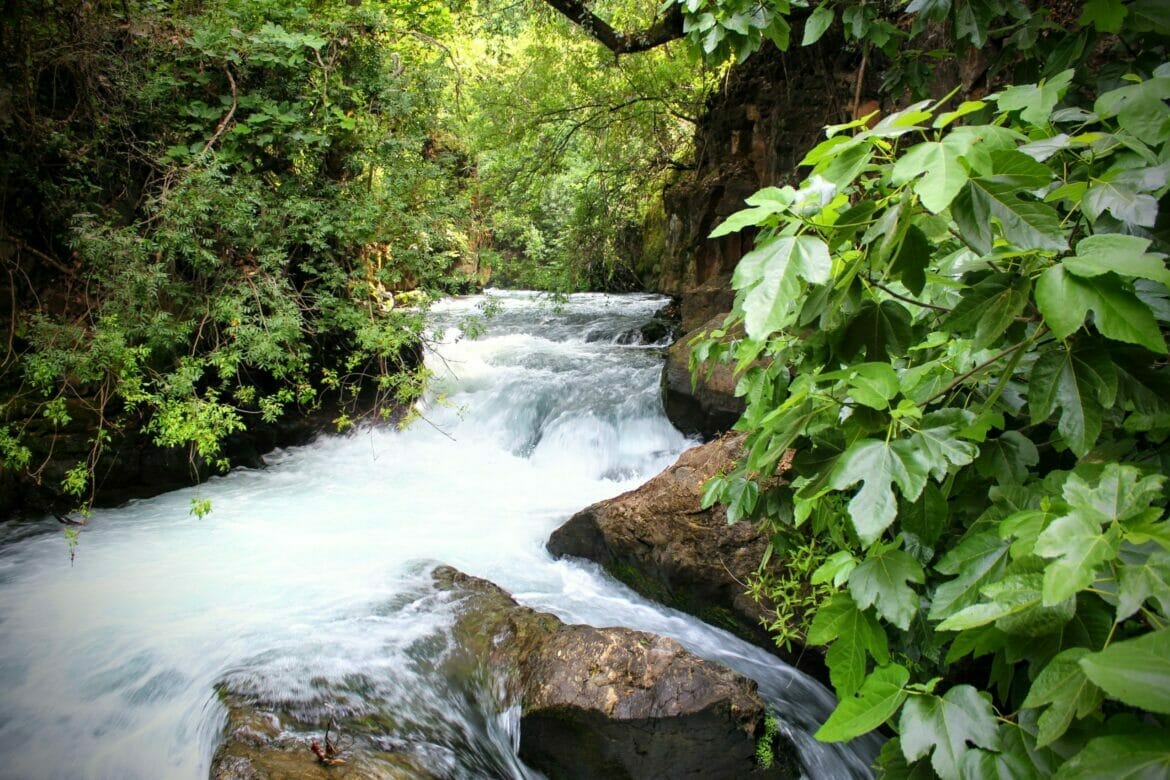 This week we finally got a chance to revisit one of the most popular hikes in the Golan – the Banias.  Our plan this time was to hike a path that was a bit off the beaten track, from Banias Falls to Banias Springs.

This trail is a four kilometer, easy walk that can either be hiked in one direction (with a car parked at the second lot), or there and back.  We hiked it there and back.  And the trail itself was so beautiful, that we were happy to see the scenery a second time.

Ever look at the gushing strength of the Banias Falls and wonder where all of that water comes from?  We did.  And on this visit to the Banias, we got to follow the Hermon Stream through quiet and shady (and beautiful) scenery, past an old flour mill, all the way its source.

Here’s how we hiked to the Banias Springs and what we saw along the way:

The Early Bird Gets the Worm

Last time we visited the Banias, the place was a mob scene.  Despite this, the Falls were still an incredible sight. But this time we wanted to experience the waterfall in its natural element – without having to fight the crowds for a view.

So, we made sure to show up bright an early, within an hour after the park opened for the day.

Seeing the Banias this way was a completely different experience.  It wasn’t quiet at this part of the trail – the sound of the falls filled our ears – but the whitewater rush was the only noise we heard.  We didn’t see one other person near the falls or by the suspended bridge.  We had the Banias all to ourselves.

This time around, we were easily able to take pictures of the giant rush of water weaving its way through the rocky riverbed – no fighting for a photo spot.  After snapping a few shots, we were on our way.

Last time we attempted to hike this longer path, we were stopped by a Parks worker at the bridge crossing.  No one is allowed to cross towards the springs after 2:00 PM in the winter time.  Since the hike is about an hour each way, they don’t want anyone to get stuck in the middle after the park closes.

This time, we breezed our way over the bridge and towards the Springs path.

The trail itself was so shady and beautiful.  Although it was a hot day, it was cool under the canopy of trees.  A wall of black rock bordered the path on one side, and the Hermon River gushed by on the other.

We passed bushes full of pink flowers and red blossoming pomegranate trees.  And we crossed a little wooden bridge suspended above the river.  In the water, we could see lots of little fish, lucky to call the Banias their home.

Breakfast by the Plane Tree

After a while, we reached some rocks where we could sit and dip our feet into the water.  We hadn’t had anything to eat yet that day, so it seemed like a great place to stop.

Right in the middle of the pool of water was a clearly labeled Plane Tree (Dolev in Hebrew).  Plane trees thrive and grow when they have a lot of water.

We have a really big one in our backyard.  This Banias Plane tree was triple its size.

Water rushed over the rocks.  Fish nibbled at our toes.  And it was kind of hard to believe that we were minutes away from one of the biggest tourist hot spots in Northern Israel.  It was just so peaceful and silent.

Soon we packed up our bags and continued down the path.

A Water Powered Flour Mill – Not Only in Scotland!

The walk continued through a serene setting towards built up pools and miniature water falls.  Soon we found ourselves approaching an old flour mill – the only mill of its type in Israel that can still be operated. This flour mill used to serve the inhabitants of the area’s villages.

When we were in Scotland last summer, every town we came across had a river running through it, along with a water powered flour mill.  I’d never seen one in Israel before (at least not one that was so well preserved). It was actually super cool to see, and very interesting to read about.

From here we continued under twisted trees and beneath an old Roman Bridge towards the Banias Springs.

Banias Springs is Where It’s at

I was completely surprised to see what the Banias Springs were like.  I had kind of assumed that they would be a little more rustic and off the beaten track.  But instead, they were built up, well maintained…and a tourist magnet.

Seems like all of the groups had ditched Banias Falls for the day and congregated around Banias Springs instead.  But the truth is, it was such a large, wide open area that it was much more conducive to tour groups than the Suspended Bridge near the Falls.

A giant pool with a few waterfall steps sat at the foot of a towering mountain.  The area was green and lush – several groups were gathered on big stone seats in the shade.  As we set off to explore the springs, we saw that there was a lot more to Banias than we knew.

We saw the Temple of Pan.  And a gathering of ancient columns around a pink flowering bush.  We walked through the area for a while, but decided to stop short of going to explore much further (there’s a long walk to Nimrod’s Fortress that leaves from this spot).

We’re on the Road Again

After taking in the sights and sounds at Banias Springs, we were ready to turn around and go back the way we came.  It was starting to get hot, and we were looking forward to another cool walk along the Banias River.

Since we didn’t need to stop on the way back, the return trip went much faster.  It only took about a half hour to get back to our car.

So… what’s a gal to do?  Banias Springs?  Banias Falls?

Sometimes it’s all about the journey, not the destination.  The best place to hike the Banias is on the trail between these two hot spots.  On this hike, we found cool, quiet solitude in one of the most incredible natural settings in Israel.

This trail was such a hidden gem. I just can’t believe that in all of the times I’ve been to Banias, I’ve never walked down this path.

It’s an easy walk, only about an hour long (if you go one way), and it’s cool, beautiful, interesting, well-marked…what more could you want in a trail? I know that my kids would just love this trail. Between the blue dragonflies, the fish in the water, and the flour mill, there’s a lot they would appreciate.

You can hike this trail in any season. It’s beautiful in cool or hot weather. Try to get there early to beat the crowds. Also keep in mind that if you get there too late in the day, they may not let you on the trail. Worth it to call and check if you aren’t sure. 04-6950272

Since it’s a National Park, there’s a fee to get in. Facilities on site at both ends of the trail (so you could have a mid hike bathroom and popsicle break if you are hiking both ways).

There is also a huge shady picnic are with about a million tables at the Banias Springs side of the trail.

5 thoughts on “Hike to Banias Springs”