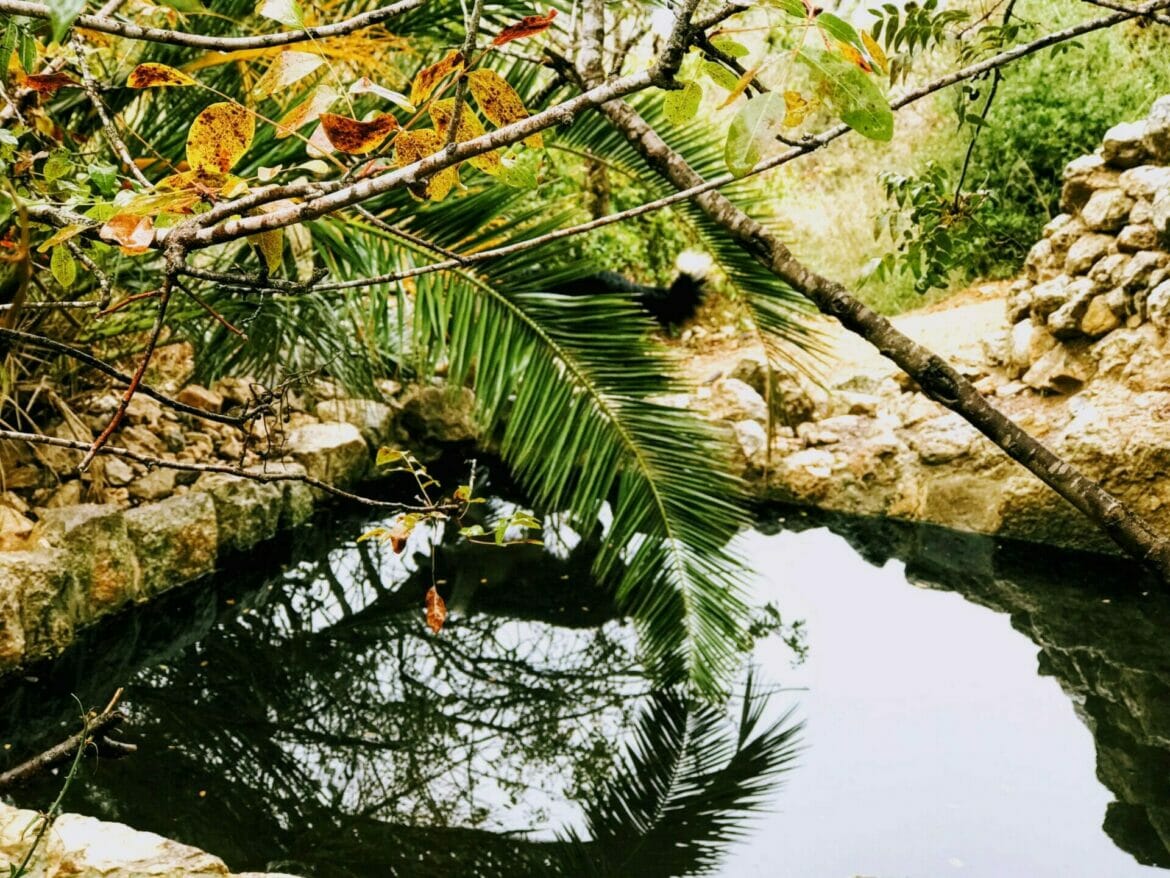 Note: The distance, time, and difficulty apply to the trail without Ein Hendek!

The sky was grey and drizzly as we set out to hike the Springs Trail (Shvil Hamaayanot), last Friday morning.  We began our day with the best of intentions – a little bit of bad weather wasn’t going to stop us!  But as we started our walk, the wind bit at our faces.  The dark clouds weren’t doing much to enhance the beauty of this exposed mountainside trail.  And I got ready to give this hike a negative review.

But, as so often happens in these situations, within ten minutes I was proven completely wrong.  Turns out that even in the cold, the Springs Trail is a beautiful little hike with a lot of surprises.  Since it’s only three kilometers long in each direction, it’s a great hike for families.  And it’s right on the outskirts of Jerusalem.

Shvil Hamaayanot is essentially a water hike, so I imagine that it’s twice as fun in the summertime.  Here’s the lowdown on this Jerusalem trail:

The trail starts near Yad Kennedy, only 11 kilometers away from downtown Jerusalem.  We drove down the hill from there to Chorvot Seadim (Seadim Ruins) and followed the green path toward the trailhead for Shvil Hamaayanot.  That’s where we began this mountainside hike.  For the first few minutes, the trail was pretty average.  The views were of rolling mountains, but also of the nearby city.

I had heard that this path was peppered with caves and springs and other cool things to explore.  And it wasn’t long before we stumbled upon the first cave.  And then the second one.

We climbed under the archway and inside the cave.  Rain still drizzled down, and since we weren’t likely to find another dry place to enjoy our morning coffee, we decided that this was it.  That was a great decision.

Inside the cave it was peaceful and silent.  The only sound around was the light pitter patter of the rain on the trees.  The soft sunlight filtered through the rock formations, forming a golden pool of light right outside the cave opening.  There weren’t many people on the trail that day anyway, but the cave felt like a little fortress of solitude.  It was the perfect place for a steaming hot cup of coffee (thanks again, thermos!).

Reluctant to move from our hiding place, we continued along the path.  There was still plenty to explore.  And before long we reached the first spring.

This one was almost empty, and I wondered if this Springs Trail would be like other water hikes we’d seen – dry.  But a few more minutes of walking and my worries evaporated.  There were two full pools of water right along the path.

We stopped to check out the flowing water and the beautiful flowers growing around it. Then we continued on our way. Before long we arrived at another small cave.  And then another spring.

This one was clearly a warm weather favorite.  There were picnic tables and benches.  Signs for girls’ bathrooms (to a hidden spot in the trees).  Forgotten items of clothing draped over tree branches.  And palm fronds around the pool which made it look like a desert oasis.

It was really pretty. And super cool to discover that these beautiful springs were actually in existence on a trail so close to home.

As serene and peaceful as it was on a day like today, I could just imagine my kids here in the summertime.  They would love to walk this path from spring to spring, exploring every hidden cave.  In warm weather, this perfect little pool would be filled with the sounds of their splashing.

We continued towards the end of the path, where we reached another hidden cave and then another, emptier spring.  The path became thickly forested and beautiful.

Ten more minutes’ walk through the trees, and we arrived at the road to Ein Hendek, the last part of what is officially Shvil Hamaayanot.

Here we debated.  It had been a really beautiful walk, and we didn’t have much time left before we had to get home.  Should we continue down to Ein Hendek?  When we read about the Springs Trail, it wasn’t clear whether Ein Hendek was really part of the trail or a separate hike.  But the sign said that Shvil Hamaayanot continued.  And we had heard somewhere that it was only a short walk there.  So we decided to go on.

The trail continued downhill and across the road.  And then it went sharply down some stairs.  And down on a steep path. And then down some more.

Maybe if I were a mountain goat the Ein Hendek trail would have been a short walk.  But I think that for most people, this part of the hike would take at least forty-five minutes in each direction.

As it was, we were committed to finding this last spring and finishing up the complete trail.  So we followed it all the way to the end.

Actually, if we weren’t in such a rush, I think that this would have been a really cool part of the trail.  The scenery wasn’t as beautiful as Shvil Hamaayanot proper, but there’s something about walking through a valley amongst the trees and shrubbery.

After a much longer journey than we anticipated (and a much greater descent), we arrived at Ein Hendek.   Since we didn’t have a lot of time, we weren’t able to explore it to the fullest. The spring itself was mostly empty, but there was a large clearing and a cute little picnic area at the site.

We snapped a few pictures and headed back the way we came –up, up, up the hill.  I was happy that we got a good workout out of it, all the more so because we were really rushing at this point.

Once we were back at the crossroads, it was easy walking the rest of the way.  On our way back through Shvil Hamaayanot, I noticed how beautiful the views were when travelling in this direction.  There were forested mountains as far as the eye could see.

As I always say, there’s so much beauty in this land waiting to be discovered.  And so much of it is really close to home.  The Springs Trail is yet another great place to experience nature at its best, just outside of the hustle and bustle of the city.

Beautiful springs right in Jerusalem? A three kilometer hike with lots of fun highlights along the way?  Bring it on!

Check out this hike if you’re looking for a moderately easy hike near Jerusalem.  But unless you are prepared to really work up a sweat, don’t go down to Ein Hendek as part of this trail.  It’s an extra 4.5 kilometers with a super steep descent.  There’s no good reason unless you are looking for a hike of greater length.  The scenery on the main part of Shvil Hamaayanot is much more beautiful.

If you’ve downloaded my map in Google Earth, just follow it until you reach the sign for Ein Hendek. Then turn around and go back the way you came.

If you want to see Ein Hendek itself, you could also head down as a separate hike altogether.  There’s a parking lot near the top.

As super serene and awesome as this hike was in winter, I’ll definitely be bringing my kids back here in the summertime.  I’ll let you know how it goes.  Stay tuned for updates.

Update: I hiked this with the kids on a warm day and they loved it. The first part was in the sun, so we had to drag them along a bit. But once they hit the caves they were hooked. It took a while to get to the springs, and once we were there they approached the pools with a bit of trepidation (cold water, no chlorine:)), but in the end they had tons of fun. One of the pools was perfect for the non swimmers and one was deep. So the final word is: great for kids!

New! Read this guide to how to use navigational features in these posts.

Questions? Comments?  Have you hiked this trail?  Let me know in the box below! 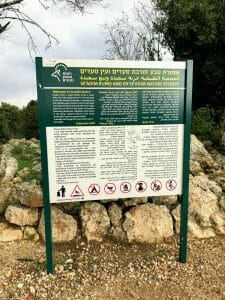 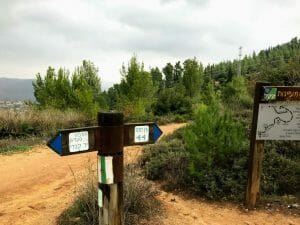 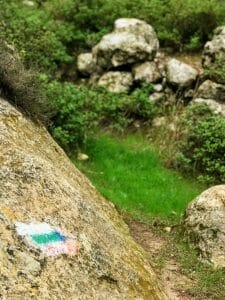 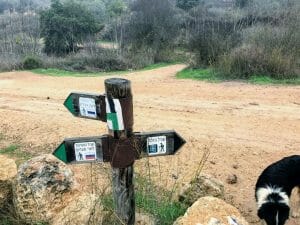 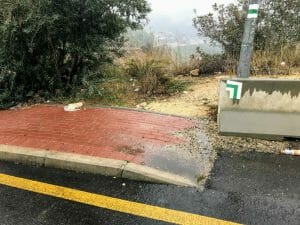 The trail down to Ein Hendek. 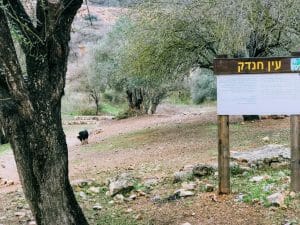 6 thoughts on “The Springs Trail – Jerusalem”