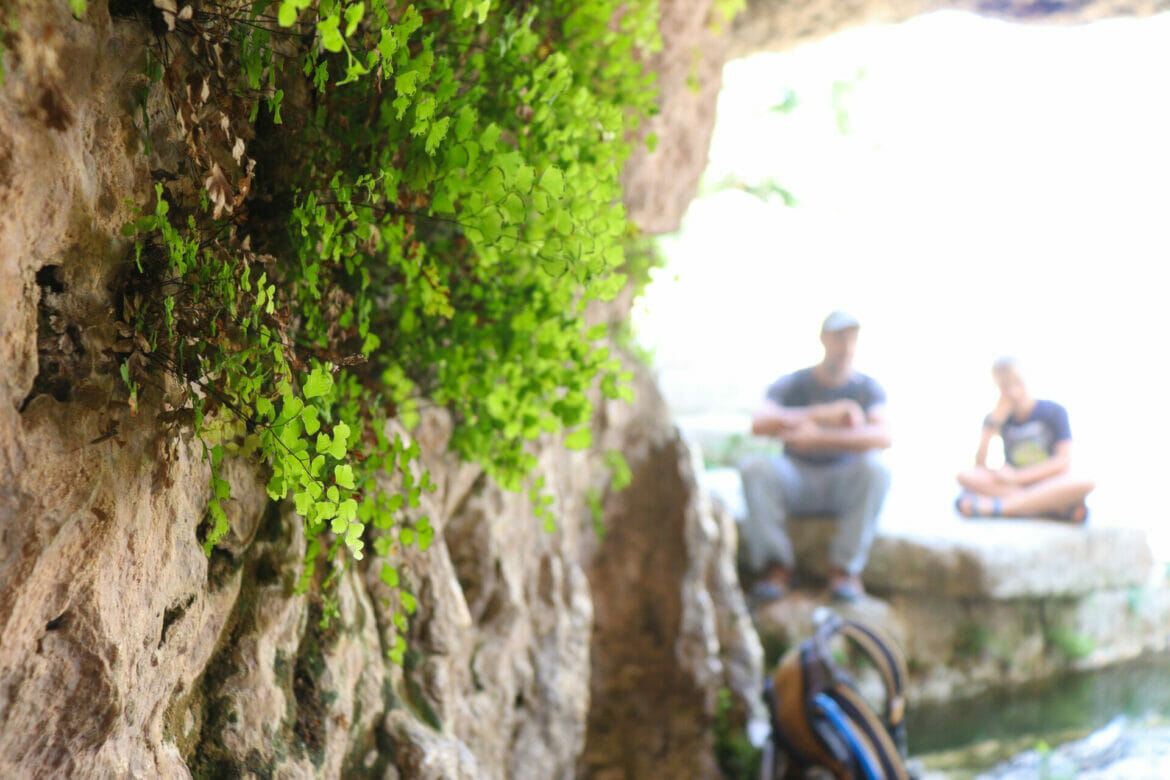 Sometimes, I feel like I can conquer the world.  I’m up at 4:30 AM, ready to drive for two hours to an amazing adventure far away.  I’m organized and planned out.

Other times, we all roll out of bed far too late to complete an ambitious hiking trip.  On days like these, we like to head out on a local and low key hike.

This past Friday was one of those days.  Our original hiking plan had included a two hour drive and waterfall pools.  But at 9:00 AM on a Friday morning, we knew we weren’t getting anywhere far anytime soon.  Our thoughts drifted to Nebi Samuel National Park near Jerusalem.

Home to Samuel the prophet’s tomb, this park had been on our radar for a long time.  I didn’t know much about it, and there wasn’t a whole lot of information online.  Still, it was a new place that we had never visited before, and we wanted to check it out.  I figured we would make a quick stop at the park, then continue on to the Ein Prat Nature Reserve, a 15 minute drive away.

I didn’t expect our visit to be anything special. Nebi Samuel looked like it would be hot on a summer morning. Judging from the pictures, it didn’t look like a place we would want to linger.

Boy, Was I Wrong

In fact, Nebi Samuel National Park was fascinating and fun.  There was so much to see and do that the hours slipped away while we explored, leaving us with no time for Ein Prat.

At 800+ meters above sea level, Nebi Samuel National Park was surprisingly cool and breezy for a July day.  There were remnants of the past from many different time periods, all open and available to explore. In addition to all of the cool antiquities, there was also a pretty little spring in a cave, dubbed “Hannah’s Spring”, after Samuel the prophet’s devout mother.

For a place with so little glitz and glimmer (no movies, no gift shops), Nebi Samuel Park turned out to be a great find in the Jerusalem area.  Here’s how we explored the place:

Don’t Judge a Park by its Parking Lot

We started off by pulling into a tiny little parking lot overloaded with cars.  Jerusalemites in city garb were coming and going, passing by shop owners offering horse rides and popsicles.  It seemed like way too much activity for nature lovers like us.  We almost kept driving.

But I insisted that we at least park our car and pop into the place.  Perhaps the crowded lot wasn’t representative of the inside of Nebi Samuel Park.  We parked our car and made our way towards the gated entrance.

Inside the park, things were a lot quieter.  The cashier’s booth was empty, so we poked around the park offices, looking for maps of the site.  After procuring a small brochure, we set off in search of an organized path to follow.

According to the signs at the site, extensive archeological excavation revealed that this spot is the site of the Biblical town “Mitspe” where Samuel the prophet spoke to the people of Israel.  At the center of the site lies Samuel’s tomb (identified as such by religious followers for thousands of years).

Different structures have been built around the tomb throughout the ages.  In modern times, a large and impressive Crusader fortress dominates the site.  The church of this fortress is topped by an Mamaluke era mosque, which remains standing today.

The first stop on our journey was this impressive building, a huge arched structure that felt like a castle inside.  Steep steps led down on one side to a chamber containing Samuel’s tomb.  We crept down to peek in at the people praying inside.

Next, we ascended a steep set of steps towards the rooftop lookout.  We passed by little arched windows, where nesting pigeons cared for their young. At the very top, we exited onto the multi domed roof.

A beautiful breeze blew in our faces.  We took in the incredible view of our surroundings in every direction.  This spot was an amazing place to take in the varied landscape around Jerusalem.

Next, we went outside in the direction of the spring.  On our way, we had to stop and take a tour of the cool, maze-like structure around the Crusader fortress.  This unusual rectangular system of narrow passageways served as a quarry thousands of years ago.  For my boys, it was a fun place to play hide and seek.

At this part of the fortress, there was also a moat (cool!), and lots of ancient pillars and columns found at the site, arranged in a line along the pathway.

On our way down to the spring, we passed by simple, unsigned burial caves, complete with stone benches within.  These humble caves were constructed during the First Temple Period.  We peeked inside, then continued down towards the spring.

According to tradition, Samuel’s devout mother, Hannah, immersed in the freshwater spring after giving birth.  Past olive, walnut, and fig trees, we discovered the spring pool and an opening into an incredibly cool cave.

In mid-summer, the outer pool wasn’t the cleanest.  Fallen figs and refuse had turned the water a bit murky.  But just inside the cave, crystal clear water flowed into a cool, shallow pool.  This was a great place to splash and explore.

We took off our shoes and headed into the depths of the cave tunnel, splashing in the water as we walked.  At the very end, the tunnel turned upwards.  We could see the spring water flowing down from up above.

After spending a long while getting wet in the spring and having our morning coffee, we packed up and moved on, back up to explore some more ancient ruins.  First, we got a glimpse of the great Crusader wall and the outside of the fortress.

After a long climb up the hill, the kids were ready to stop for a minute.  Conveniently, there were some wooden chairs next to a tree just outside the fortress.

I couldn’t believe how cool it was up there, even on a hot summer day.  Despite the lack of shade, the strong breeze kept us comfortable.  It was a nice spot to sit and look out – to the fortress on one side and beautiful views on the other.

A Hellenistic Road and a Second Temple Period Town

On we traveled, down the steps past an oversized oven and onto the Hellenistic Road.  It was surprisingly intact.  As we wandered, we found ourselves exploring the remains of a Second Temple Era town.

It looked quite similar to other towns from the period that we had seen.  There were nooks and crannies, storage rooms and cisterns.  All of the structures were arranged together, with common walls between them.  There was a lot to explore.

The last stop in the town was the Beit HaBad, or olive press.  These stone structures can be reliably found in pretty much any archeological dig of the time period.

Crusaders: Not a Fan, but They Made Cool Fortresses!

From here, we continued into the fortress – a more intact and complete structure.  We climbed up steep steps, peeked through tiny windows, and headed down into musty chambers that felt more like dungeons than storage rooms.

When we had finished our explorations, we moved into the sunlight.  Our last stop before exiting the park was the ancient campground outside of the fortress.  Here, pilgrims had pitched tents on their way to Jerusalem.  Stone troughs for animal feed remained completely intact along the edge of the campsite.

We had seen a lot at Nebi Samuel National Park that morning.  Our visit had taken a few hours instead of the 15 minutes I had anticipated.  After a day in the park, the kids were wet, happy, and full of fun stories to tell.  Our low-key outing was a success.

This hidden gem near Jerusalem is a worthwhile place to visit.  At Nebi Samuel, fascinating layers of history surrounding the tomb of an ancient wise man are waiting to be explored.

Here’s what you need to know to plan a visit to Nebi Samuel National Park:

Don’t forget to read my guide to the navigational features in this post!

Questions? Have you visited Nebi Samuel? Let’s hear about it in the comments!

3 thoughts on “Nebi Samuel National Park  – History and Fun in One!” 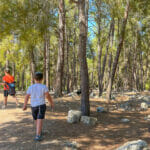