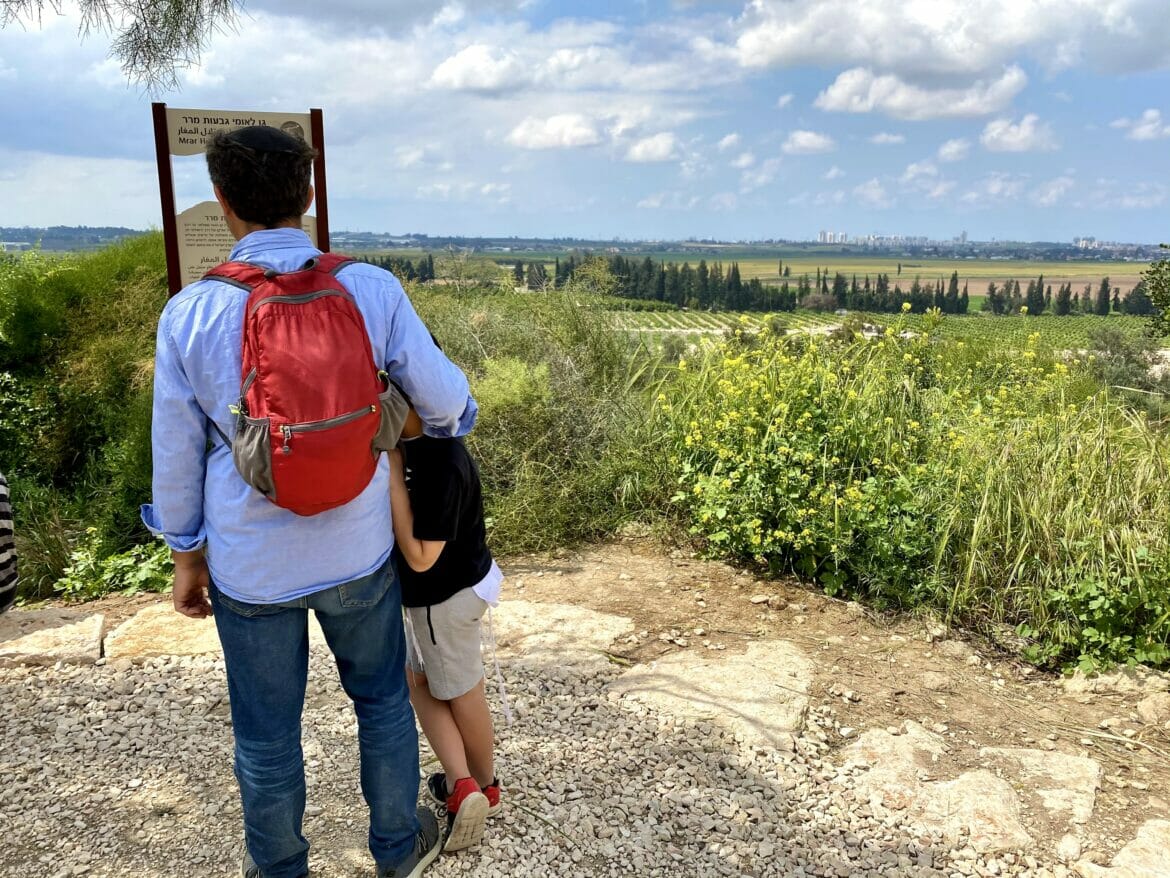 Ever stumble upon a hiking trail that you never knew existed?

A couple of weeks ago we went strawberry picking on my son’s birthday.  My nine year old loves strawberries, and he had been dreaming of this activity for quite some time.  But after we drove all the way to Gadera, paid the hefty entrance fee, and picked all the strawberries we possibly could, it was only about noon.  We weren’t ready to drive back home just yet.  So, we set out on a search for a nearby adventure.

That’s when we discovered Mrar Hills National Park, a small series of hiking trails on top of a nearby hill.  Looking at the map, we weren’t sure what the place was going to look like.  But we figured that at the very least, we could have a picnic there, check it out, and move on with our lives.

As it turned out, Mrar Hills National Park was quite a find!  The network of trails at the park was well marked and easy to follow.  The park was incredibly user friendly, with large plaques and signs explaining the area’s history and geology.

My kids had a great time tree-climbing and cave exploring.  And we found a perfect spot to eat our picnic lunch on top of a hill, with a great view out to the surrounding area.

Here’s how we hiked this family friendly trail through Mrar Hills National Park:

Scoping Out the Place

As we got out of the car and started towards the trailhead, we were pulled off to the side by a friendly Bedouin man who was sitting under a tree.  He wanted to converse with us about our kids, where we were from, and which way was the best way to start on the trail. We chatted for a few minutes, then followed his advice and started the trail straight ahead.

We walked along the path trying to get our bearings.  The area of Mrar Hills National Park wasn’t really similar to any trail we had hiked before.  It felt sort of like a cross between a coastal trail and a walk in the Jerusalem Lowlands.  Sandy looking stone lined the path, forming cliffs and crevices.

On one side of the path, the hill continued to climb up, lined with cacti and wildflowers.  On the other, we could see out to the surrounding area, a cross between a cityscape and a farmland.

After a short walk, we reached a big sign explaining the place.  As it turned out, Mrar Hills was mostly made out of Kurkar sandstone, a special kind of coastal rock formed from deposits of sand and marine skeletons.

This may not sound particularly exciting, but what makes it interesting is that certain plants (the Coastal Iris, for example) grow almost exclusively in this type of environment.  And coastal development (think big cities of Central Israel) has unintentionally destroyed much of the natural terrain.  It’s important for places like Mrar Hills National Park to exist, so that we can protect what we have left of the Kurkar hills.

With its location along the coast and near freshwater sources, Mrar was an important center of life throughout much of history.  Today, you can still see remnants of the terraced agriculture that sustained communities in the area.

Great, But When are We Eating?

While my kids were fascinated by Kurkar sandstone (obviously!), some of them were actually more interested in when we were going to eat lunch.  So, we followed the walkway, past caves (more on that later), and up the hill to the lookout.  It was beautiful and pleasantly breezy up there, but there were some other people there enjoying the view (it was a vacation day).  So, after a moment’s pause, we continued off the path to the very top of the hill.

There, we discovered a large flat area full of wildflowers and tall wispy grass.  One wide shade tree provided protection from the sun.  We found a flat spot and unpacked our picnic lunch.

After replenishing our energy, we were ready to head out and explore once more.  We picked up our bags and headed back down the hill, towards the caves we had passed on the way to the top.

According to the sign outside, these caves were one of the most important features of Mrar Hills. During the Second Temple period, the caves were used for burial.  Later on, during the Ottoman period, these particular caves were used as storerooms by the villagers who lived there.  And in fact, much of the “village” was actually cave dwellings.  The word mrar means “cave” in Arabic.

After checking out the caves and climbing up a nearby carob tree, we continue to follow the path towards the next landmark on the trail.

Soon, we reached a large, decorated sign that stood before a beautiful lookout.  The sign explained that Mrar was the site of one of the last known military cavalry charges, during World War One, between the Turks and the British.  I appreciated having these little pieces of information scattered throughout the park.  It brought a new level of understanding to a beautiful but unknown landscape.

At the end of one path, we reached a large cistern in the ground.  These are not unusual to find all over Israel. What was unique about this one was that there was a handy sign right outside, explaining how ancient cisterns were constructed.  We stopped and peered in, then were on our way.

Not long after that, we had completed the full loop in Mrar Hills National Park.  We headed back to the car extremely pleased with our discovery.  That day, we stumbled upon something unexpected: a little world of wild beauty in the sandstone cliffs near Gadera.

Here’s what you need to know to take this hike at Mrar Hills National Park:

Questions? Have you hiked at Mrar Hills National Park? Let’s hear about it in the comments!