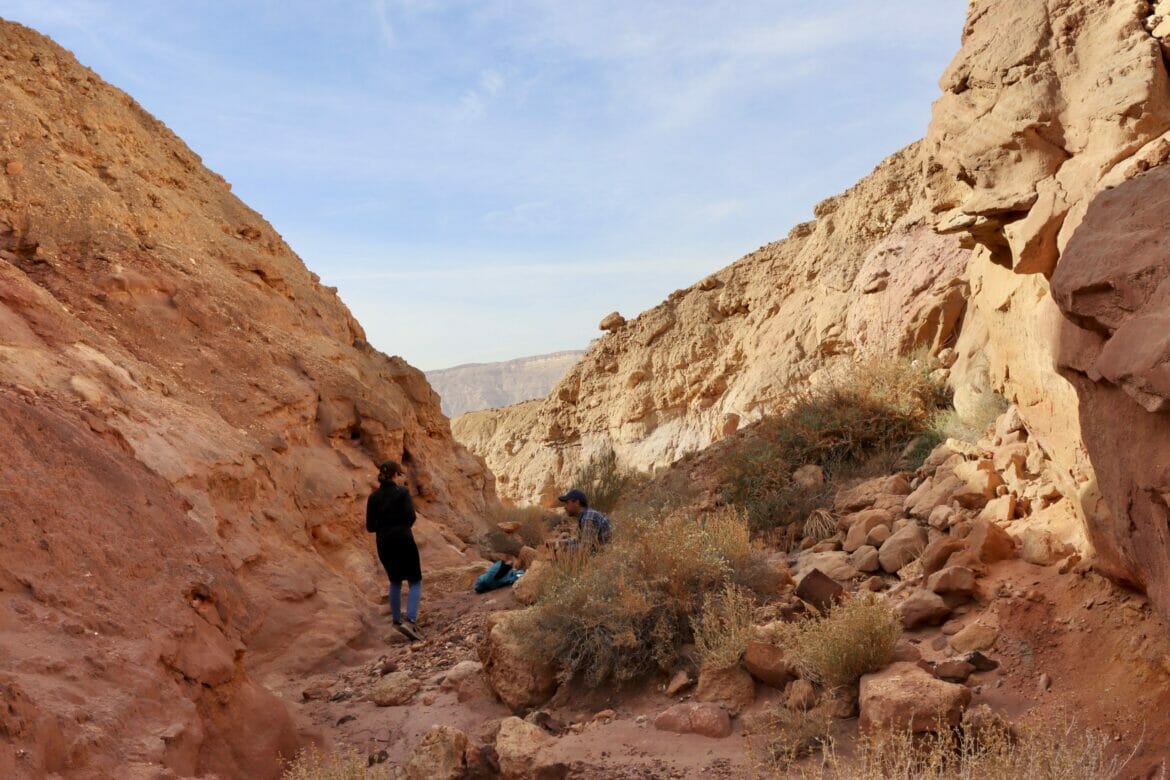 If you live in Israel and you love to hike, you’ve probably been to Makhtesh Ramon. But a bit north of the giant crater are two more craters that are great for hiking: Makhtesh HaGadol and Makhtesh HaKatan.

Many people have heard of these craters but haven’t actually visited them.  I was one of those people.  Until yesterday.

Yesterday I set out on a super intense hike through Makhtesh HaKatan, the smaller of the two craters.  The crater (which has finally been designated as a Nature Reserve), is only about an hour and a half from my home.  But it took a good twenty-five minutes more to drive down a bumpy dirt road and reach the trail head.

At Makhtesh HaKatan, we saw rock of purple and gold piled up to form strange mountains.  We hiked through the crater for a while, then climbed all the way to the top.  Just when we thought the hard part was over, the trail got even more intense: traveling up and down along a sheer ridge, then plunging over the side into a riverbed with almost no solid ground.

It took us over six hours (moving fast!), but we saw some of the coolest sights we’ve seen in a while.  Here’s how we took this 17 kilometer journey through Makhtesh HaKatan:

It’s All Roses and Sunshine

After a 25-minute drive down a winding, bumpy road, we reached the trailhead – an opening in the side of the crater known as Sha’ar Ashmadai.  We parked, got our stuff together, then set out on the red trail towards the center of the crater.

Almost immediately, we were struck by the unique beauty of Makhtesh HaKatan.  Rocks of every color stood in wave like formations.  We hopped onto the blue trail, then followed it up and over miniature riverbeds and through really unusual scenery.

It had taken us a while to get there, so after 45 minutes of walking, we looked for a place to stop and have coffee.  Soon enough, we saw a multicolored channel that shot off to the side of the trail.

We climbed in and set ourselves up with food and drink.

So far, it seemed like this trek was going to be smooth sailing.  Inside the channel, rock glowed in colors of yellow and mauve.  We relaxed with our coffee and looked up at the blue sky dotted with clouds, confident that we would get through the 16 kilometers ahead with plenty of time to spare.

After taking time to appreciate the wonders of nature, we packed up and set out on the trail again.

From here, we continued along the blue trail which took us through more unusual scenery.  The sky began to cloud over, but we were happy that there was no sun to warm us.  We knew that soon we would be scaling the walls of the canyon to the top.  We were better off with the protection of a cloudy sky.

As we approached the far side of the canyon, we saw the blue trail snaking up the side of the mountain, weaving backwards and forwards at a steady incline.  It seemed that this would be the hard part of the hike.

And I’m not going to lie – it wasn’t easy.  We plowed forward slowly and steadily, ascending sharply in some places, more gradually in others.  Every time it seemed like we were close to the end, a new peak appeared from up ahead.

By the time we finally reached the top we were soaked in sweat.  We sat down to take in the views out to the crater that lay in front of us.

But we didn’t sit there for too long.  That’s because a cold wind blew in towards the top of the crater, cooling down our sweat soaked bodies.  We turned onto the green trail, eager to continue.

We had thought that we were finished with the major ascent, but the green trail carried us even further up the crater, onto a ridge that wrapped along the edge of Makhtesh HaKatan.

The views out to the crater were incredibly cool.  Looking down, we could see hills and valleys laid out below, in a palette of colors you don’t usually see in nature.

We followed the green trail up and down the ridge – at fear inspiring heights.  Climbing uphill actually wasn’t the biggest challenge.  It was the rocky, stumbling descents that were the most difficult.  This ridge trail was not the kind of place that you could tackle a downhill with careless momentum.

After a long journey along the side of the crater (stopping once for a snack break), we reached the end of the ridge, where the green trail turned left towards the Nahal Meizar.

We followed the trail forward, with the knowledge that finally, the hard part was behind us.

At first, as we walked through the riverbed, we thought this would be a simple matter of descending slowly through a pleasant canyon.  But it soon became apparent that it was nothing of the sort.

Instead of flat ground, much of the trail was made up of teeny tiny pebbles and dust.  Going downhill at a steep incline, this type of makeup was a recipe for a falling disaster.

Even when we were walking on firm ground, the rocks always seemed to be at an angle.  Sometimes a completely diagonal angle.  I felt like a fly on a wall without my sticky feet.

We did see some really cool things as we climbed through that riverbed.  There was a family of ibex, perched up above on a cliff.

There were colorful birds that I never seemed to be able to catch a picture of.  Bushes of yellow flowers popped up from the bottom of the channel.  And unusual rocks cropped out from the sides.

When we reached a giant waterfall, the path took us sharply up and down again, to circumvent the falls and return to the riverbed. This was probably the most difficult descent of the whole trail.

So, when we got to the next waterfall, I chose to ignore the trail which led up and then down again and figure out another way through.  I was ready for any climbing challenge, but I had had enough of sharp descents down rock-slides.

As we continued to move forward on the green trail, the path just got more and more unbelievable.  For the last ten meters, I actually sat down and slid to the end: something I never ever, ever do!

We had finally made it through the hard part.  I picked myself up and got ready for the last 4 ½ kilometer stretch along the red trail.

If we’d had a second car, we could have left it right here rather than walk along the red trail.  But instead, we got to enjoy a beautiful, easy walk towards HaMaktesh HaKatan as the sun began to descend in the sky.

We were tired and our whole bodies ached, but I was still kind of glad that we had this last stretch to go.  It gave us a chance to decompress and take in the scenery, without having to worry about where to place our feet next.

As we neared Sha’ar Ashmadai, the birds came out in full force – black ones with white bellies, colorful ones.  They chirped and swooped between the “gates” to the crater: two tall wave shaped rocks with a gap in between.

Finally, we were back at the car.  We collapsed into our seats, every muscle feeling it.  It had been an incredible, an almost impossible, a totally uniquely beautiful day.

The trail through the Makhtesh HaKatan was a new and wonderful hiking experience, unlike any other.

Here’s what you need to know before heading out on the trail:

Questions? Have you hiked this trail? I’d love to hear about it in the comments.