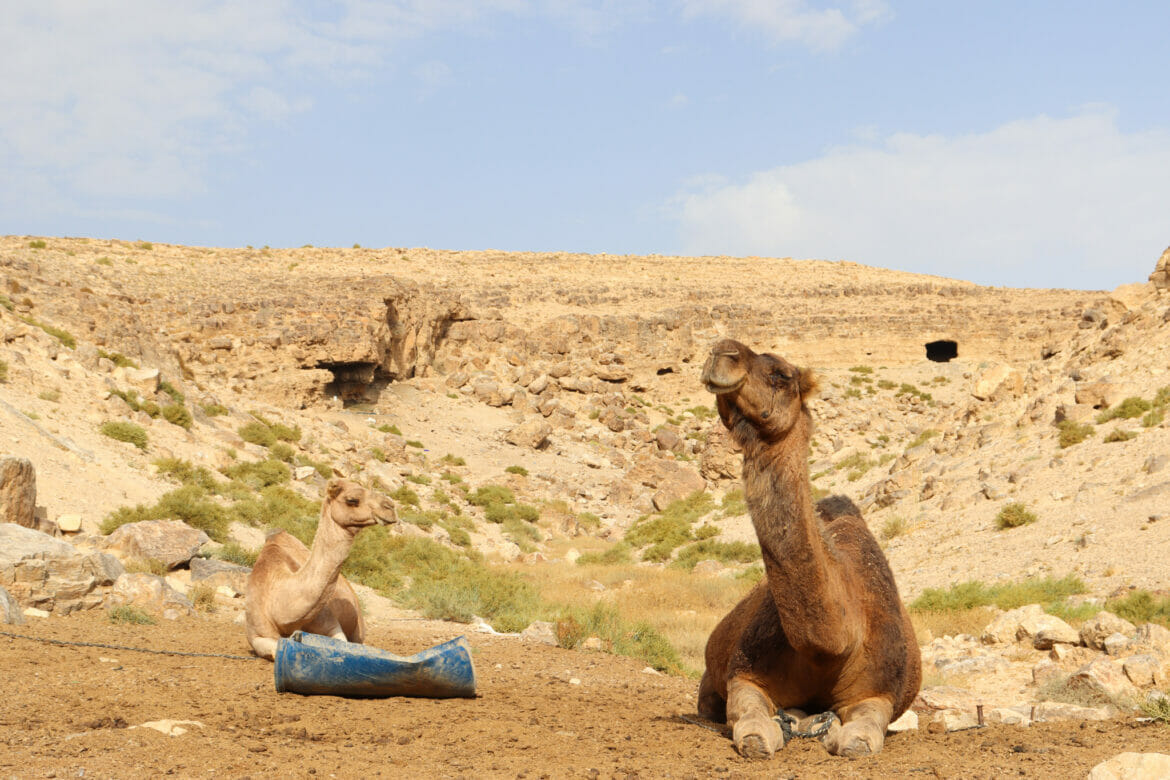 Late last week we were in the middle of an autumn heat wave.  Temperatures around Jerusalem were going to be in the mid 80’s (Fahrenheit) that Friday, on the hot side for late October.  Picking the right hike was going to be a challenge.

Looking over the map, my eyes fell on the area around Arad.  We’ve discovered that parts of the desert are often similar in climate to the Jerusalem area at this time of year.  And early in the morning, the desert can be downright chilly.

If we could get an early start, perhaps we could try a new trail near Arad called Nahal Kidod.  We planned out a hike, packed our bags, and got ready for an early start the next morning.

When we arrived at Nahal Kidod, it was still dark out.  We got started on the trail just as the sun began to rise.  And thanks to a beautiful sunrise, our hike that day at dawn was simply spectacular.

Nahal Kidod itself was lovely, but also fairly typical for an Arad area trail.  There were lookouts, riverbeds, cool rock formations, and some animal life.  The 6 kilometer trail wasn’t particularly strenuous or difficult.  It was just a nice, sunny walk in a pretty part of Israel’s desert terrain.

But the desert at sunrise?  Now that’s a whole different story.

Here’s how we walked this 6 kilometer trail through Nahal Kidod at dawn.

A Little Too Early

When we reached the parking lot near the Moav Lookout, it was still completely dark out.  Within a few minutes, dawn would begin, lighting our path along the green trail.  So we strapped on our bags and went to find the start point for the trail through Nahal Kidod.

A few minutes later, we were on our way – and so was the sun.  Slowly, the world around us began to lighten.  Birds began circling and chirping in the sky. By the time we reached the lookout, we could just begin to see the surrounding desert mountains.

After a short stop, we continued our hike along a long path out into the desert.  It was a sloooow walk.  That’s because we had to stop every few minutes to take pictures of the multi-hued sky, peppered with hundreds of miniature clouds.  By the time we reached the turning point down into the valley, the sun was just beginning to peek over the horizon.

We followed the path down into the valley.  The desert hills at dawn were simply spectacular.  We moved slowly, stopping to gape at the beautiful views all around us every few moments.  On one side, the red sun rose slowly into the clouds.  On the other, its light cast a golden glow on hills of sand and rock.  It was breathtaking.

Once we reached the bottom of the hill, the sky was light.  It was officially morning.  We decided to climb to the top of a little mountain over the stream bed and have our first cup of coffee of the day.

We climbed up off the path, past cool rock formations and clusters of dried up squill flowers.  Soon, we reached the top of the hill.  From this spot, we could see the stream bed stretch out into the desert on both sides.

Before taking a seat, we explored the little hilltop, climbing from one rock to the next.  There were little caves and stepping stones and plenty of places to discover.  After going through all of the possible options, we chose a spot on the very top of the hill to stop and have breakfast.

We finished a long break and were finally ready to start seriously hiking!  Together, we descended back into Nahal Kidod and began our journey through the canyon.

The scenery here was fairly typical of an Israeli desert stream bed.  In some places, the rocks clustered in close, forming a narrower channel through Nahal Kidod.  In others, the stream bed was more of a gentle suggestion than a defined pathway.

Birds swooped through the canyon, flitting from one rock to another and chirping as they flew along.  I was happy to finally be moving.  We hopped along from one rock to the next, following the birds on their path through Nahal Kidod.

After a short walk through the canyon, the path opened up and ascended back into the mountains.  We climbed up, beginning to finally heat up in the early morning sun.  As we reached the top, we were surprised by two camels, tied up and waiting at the top of the hill.

Up near the camels, there were some interesting caves and cool rock formations.  After a short photo session with the camels, we explored the sights at the top of Nahal Kidod.  We were almost finished with the main part of the trail.

From here, we had two options: we could continue to ascend and head up to the road, then follow it back to the car.  Or, we could swivel back and follow a narrow bike trail through nature back towards the trailhead.

On a Cycling Path

Of course, we chose the bike trail!  We walked back through the desert above the streambed in the direction of the rising sun.  This path was a great choice, as it allowed us a different perspective on the area we had just hiked through.

A few cyclists rode down, their full concentration on negotiating the challenging trail.  And we simply moved to the side to get out of their way.

After another walk through the desert, we reached the lookout and the trailhead.  It all seemed very different in the full light of day.  Now, there were other people there, having breakfast and taking in the views.

We were happy that we had gotten to explore Nahal Kidod at dawn, the most wonderful time of day.  Our walk along this classic desert trail had been enhanced by the magic of sunrise.

Here’s what you need to know to hike this trail at Nahal Kidod:

Questions? Have you hiked this trail at Nahal Kidod? Let’s hear about it in the comments!