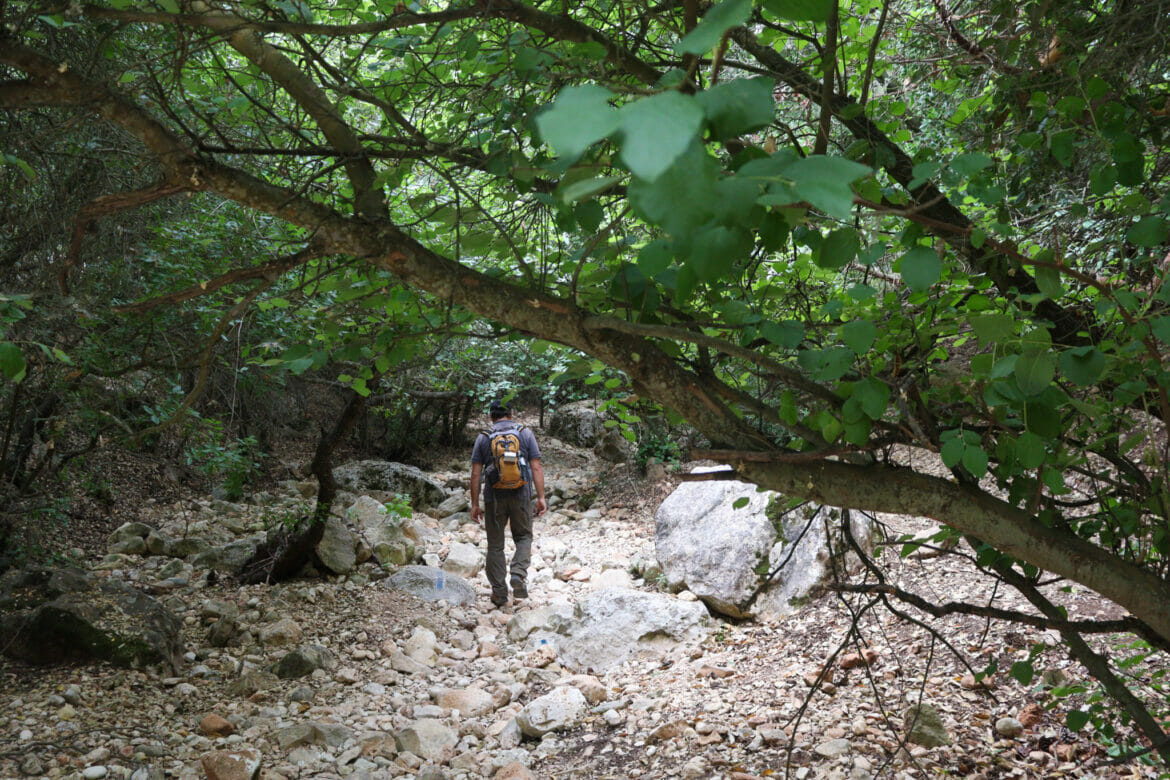 I don’t think I’ve ever been on a less than wonderful hike in the Carmel Mountains.

In the Carmel Mountains, thick greenery, shady riverbeds, and gorgeous views come together to create magnificent hiking terrain.  Last week, we decided to tackle another trail in this beautiful part of Israel: a circular trek from Nahal Neder to Ein Kedem.  The loop trail returned through one of our longtime favorite parts of the Carmel: the thick and shady world of Nahal Galim.

We began that day not quite knowing what to expect.  Would Nahal Neder be as beautiful as the rest of the Carmel’s riverbed trails?

As it turned out, Nahal Neder was gorgeous in an entirely different way.  Rather than heavy shade and thick undergrowth, the trail led through more open terrain, past greenery and cool rock formations.  When we reached Ein Kedem towards the end of Nahal Neder, we were pleasantly surprised to find a cool water cave that was both fun and refreshing.

The rest of Nahal Neder traveled through olive groves and otherworldly terrain until we finally reached Nahal Galim.  Then, as expected, the return hike along this favorite trail was heavenly.

The best part was that although we were hiking during a heat wave, we hardly felt uncomfortable.  Between the cool spring and the shade of the Carmel, the Nahal Neder trail was a perfect hot weather hike.

Here’s how we hiked through Nahal Neder to Ein Kedem:

We pulled into the parking lot and found the path, leading us down into Nahal Neder.  At first, the trail headed downhill, over loose rocks and gravel, through pockets of shade and patches of sun.

As we walked, we could see the city of Haifa in the distance.  And nearby, we enjoyed the fragrant smell of late spring wildflowers blossoming along the sides of the trail.

The path through Nahal Neder was definitely not for novices.  There were parts of the trail where we had to climb down small rock walls.  As we continued along, we passed empty pools in the rock: spots where water gathered in the wintertime.

We were so happy to be in the outdoors (this was the first day of a four day hiking vacation), that we lost track of time as we walked along.  Before we knew it, we had reached the turnoff to Ein Kedem.

Feels Refreshing in a Cave

From the outside, Ein Kedem looked questionable.  There was a small pool of water on the outside, but the entrance to the cave itself was covered in graffiti.  Still, it was a hot day, and I was ready to cool down in the shade and cold water.

We took off our hiking boots and strapped on our headlamps.  Then we climbed into the dark opening to Ein Kedem.

Inside, the water was crystal clear.  Smooth river rocks were under our feet.  We followed the long tunnel through thigh high water, keeping our heads ducked low to avoid bumping into the ceiling.

It was so cool and silent in there.  And the tunnel just kept going and going.  Our voices echoed off the rock walls as we called out to each other.  We crouched along further and further into the depths of the cave until, eventually, we reached the end.

Then there was nothing to do but turn back.  We followed the tunnel all the way back to the entrance and climbed out, only to meet three men about to climb in.  We chatted about the length of the cave, the depth of the water, and the beauty of the Carmel Mountains.

Right near the long tunnel, there was a smaller channel that we still had to explore.  We walked through the shallow water towards an open chamber.  And perched up in the corner was a teeny little bat.

We tried to get closer to take a picture, and then swoosh!  The bat shrieked and flew out right over our heads.  There’s nothing quite like being in close proximity to a flying bat in a cave full of water.

After visiting that smaller part of the spring, we headed back into the sunshine to dry off and report our findings to our three new friends.  Then we put on our shoes and got back onto the trail.

After Ein Kedem, we continued through Nahal Neder.  It seemed to become only more beautiful, as we came across a dozen old olive trees, their gnarly trunks and soft green leaves glowing softly in the afternoon sunshine.

Towards the end of Nahal Neder, it felt isolated and otherworldly, although we were quite close to Haifa.  When we came across the turnoff to Nahal Galim, we said goodbye to beautiful Nahal Neder and made a left down into the trees.

Who Loves the Carmel? I Do!

From here, the trail continued through the deep shade of Nahal Galim, a dark riverbed full of oak trees, katlav trees, and river rocks.  We followed the path, climbing over tree roots and fallen branches.  At some point along the way, a gentle rain began to fall.  The wind picked up, rushing through the riverbed in a cool gust.

Climbing through Nahal Galim on that hot morning, it felt like there was nothing more wonderful than this little shady trail in the Carmel.  We could have hiked there for hours: walking, talking, noticing birds and lizards, jumping along from rock to rock.  It was a magical place to lose yourself in nature.

Eventually we reached the turnoff to the green trail, which took us up through the trees and, eventually, back into the more open terrain near Haifa University.

Can’t Finish the Day without a Vulture Sighting

As we neared the top of the mountain, we got closer to Hai Bar Carmel (a wild animal reserve in the Carmel Mountains).  As we approached, we began to see packs of vultures circling and swooping in the sky, catching the wind that came along with the break in the heat wave.

We continued to follow the trail, through a forest, along an open road, until eventually we returned to the trailhead.

Our time in the Carmel Mountains that day had been everything that we could have hoped for: beautiful, quiet, fun, and exciting.  This challenging trail through Nahal Neder to Ein Kedem and back was a perfect way to spend some quality time in one of the most beautiful parts of Israel.

Here’s what you need to know to hike this loop trail through Nahal Neder to Ein Kedem:

Questions? Have you hiked this trail through Nahal Neder to Ein Kedem? Let’s hear about it in the comments!

Through the Carmel Mountains – Kelah and Oren Riverbeds