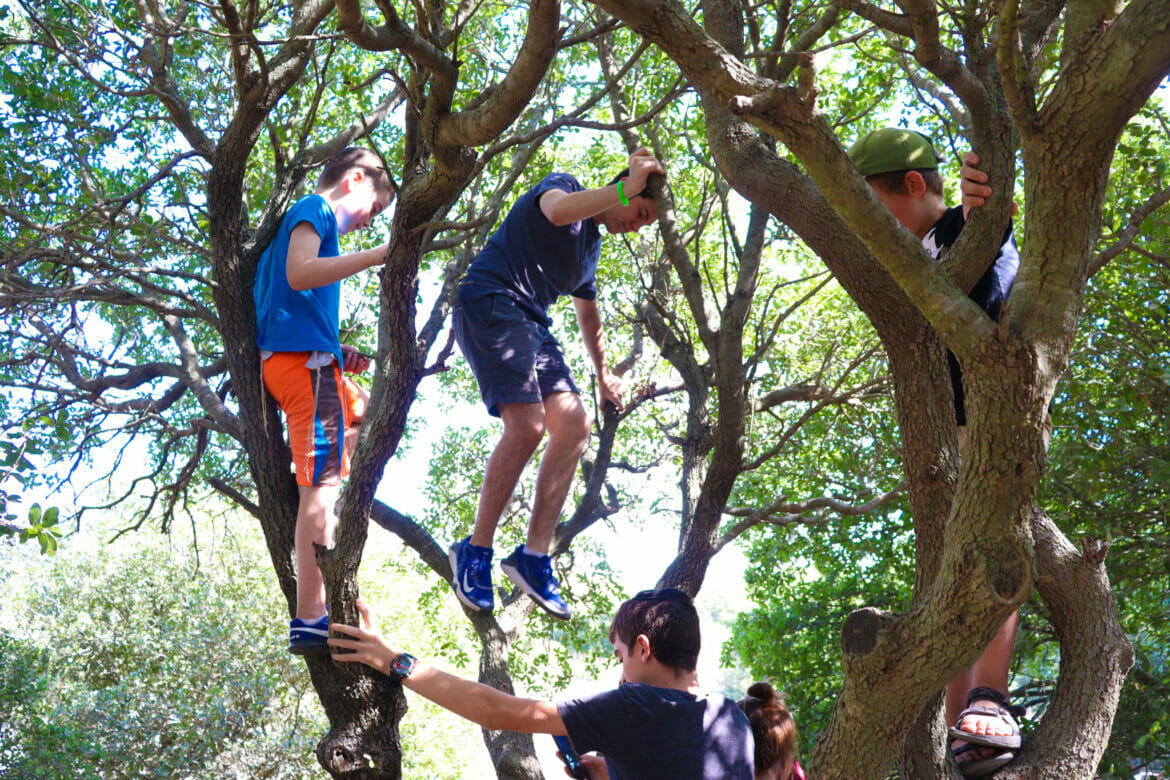 Outside of Jerusalem, in the mountainous region near Gush Etzion, lies the quiet community of Tzur Hadassah.  This little town is the perfect suburb.  It has all the amenities of modern life, but sits in an idyllic country setting, near mountains and pine forests.

Tzur Hadassah is only 15 minutes from our home in Gush Etzion.  Many of our friends and neighbors travel there for weekly horseback riding lessons.  And this past Friday, we decided to go to Tzur Hadassah too: for a countryside hike that set out from a trailhead next to the stables.

The trail we planned was mid-length, circular, and headed up Mount Kitron, an area we had wanted to explore.  It looked semi-shaded, which was good since we were still experiencing the tail end of summer heat.

As we studied the map, we noticed an added bonus feature: this short trail up Mount Kitron was actually an important archeological site.  Recent discoveries atop the mountain had unearthed a Jewish Second Temple town beneath the ground at the top of the hill.  We hoped that we would get to scope out the burial caves and other ancient ruins we saw on the map.

As it turned out, the trail was perfect for a morning with kids.  The views out to the surroundings were really spectacular , even at the end of a long, dry season.  I can only imagine how beautiful and green it must look in the springtime.

We did locate those caves and ruins.  But more importantly, we had a great little nature walk with our kids and their cousins.

Here’s what we found on our 4K walk up Mount Kitron near Tzur Hadassah:

We reached the trailhead and encountered our first obstacle: a locked gate blocking access to the path.  So, we called the number posted on the sign and explained our plans for the day.  A few minutes later, a friendly guard drove up and unlocked the gate.

We were on our way.  But just up ahead lay many fallen trees blocking the path.  After quick confirmation that our trail did indeed continue past the trees, we climbed on over.  And we only got a few scratches and scrapes along the way (lesson for the day: wear long pants!)

Once past the trees, we followed the blue trail, over a rocky pathway in the shade.  My kids chatted away with their cousins who had joined us for the day.  Our hike was off to a good start.

Soon we reached a green/blue crossroads where we broke off to the right.  Now the trail was somewhat exposed to the sun as we ascended up into the hills.

It was pleasant enough that day.  And the ascent (up Mount Kitron) wasn’t too difficult.  Nobody minded walking uphill…too much!

Of course, our kids got hungry as kids generally do, so soon, we were on the search for a shady spot to eat.  We passed one tree, then another.  But no shade tree had enough space for all 16 of us to all stretch out and enjoy our breakfast.

Finally, we reached the very tippy top of Mount Kitron.  And there we were: in a large and beautiful patch of shade, with lots of flat rocks underneath.  It was the perfect breakfast spot – and also the perfect place to go tree climbing.

It’s nice to know that your children don’t need much entertainment besides a few trees to monkey around in.

A little while later, we were back out in the sunshine.  The green trail lead to the blue trail.  Soon after, we reached our first cluster of caves built into the side of the mountain.

The kids all peered into the small openings, too fearful of hidden snakes and scorpions to go inside.  So, I strapped on my headlamp and lead the way.

There was nothing much in the cave that we explored, but it had clearly been used for some sort of purpose in centuries past.  Low rock benches lined the walls of the carved-out cave.  There were piles of rocks inside, but no snakes or scorpions.

These caves were the first indication of remnants we would discover of an ancient settlement.  We continued on over the top of Kitron Mountain, towards the covered remains of a Second Temple city.

Read All About It!

Soon, we reached Hurvat Jerasa, the ancient town under the ground.  Several years ago, archeologists working atop the hill discovered old ritual baths, cisterns, and burial caves amongst the crumbling walls of the covered town.

We couldn’t see much structure up there, so we looked it up online and read about it instead.  According to what we read, the head archeologist at the sight, Boaz Zissu, believed this to be the town of “Jerasa” where Shimon Bar Kochva was born. Jerasa was also mentioned by Josephus in his description of the conquest of Jerusalem by the Roman army.

At the site, Zissu discovered 4 ritual baths (indicating a large city), one of which included a secret tunnel used during the time of the revolt against the Romans. In the burial caves at the site, they also discovered an old candleholder from the 1st century CE.

Discoveries Beyond a Locked Gate

After exploring one more narrow cave (supposedly a burial cave – we were hoping to find something interesting inside) we started our way back down the mountain.

As we followed the blue trail, we looked out across the hills of Gush Etzion and saw our town’s water tower, protruding from a mountain in the distance.  It felt like we were very far away from home, but we really weren’t very far at all.

We turned left onto the green trail, then retraced our steps down Mount Kitron and back to the trailhead. At the entrance gate again, we dialed the number of the guard one more time.

We had only been out a few short hours.  But our time in the countryside near Tzur Hadassah had revealed a secret world hidden just beyond the gates.

This circular hike up Mount Kitron near Tzur Hadassah was a great exploration of an undisturbed part of our beautiful country.

Here’s what you need to know to hike this circular trail up Mount Kitron near Tzur Hadassah:

Journey to the Clouds: Mount Sansan