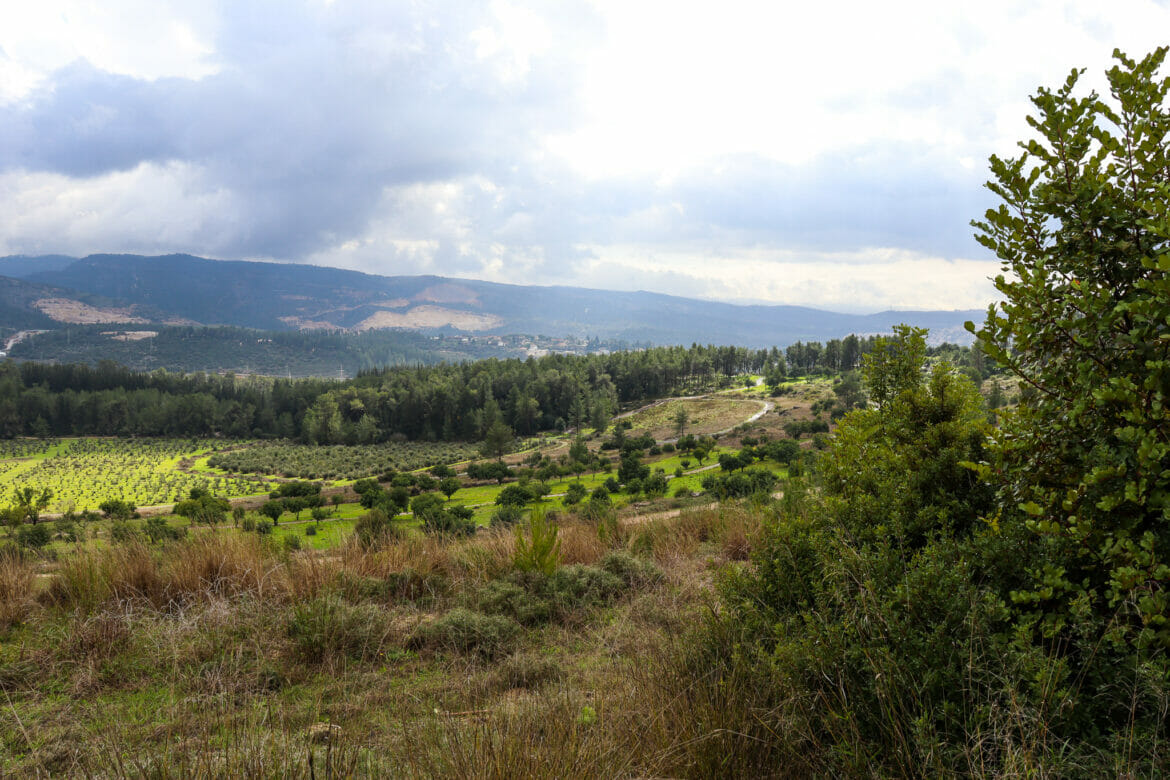 Another day, another rainstorm.  And another route through Tzora Forest, our new favorite nearby KKL Park for walking and hiking.

We set out late on a rainy Friday morning. Winds were blowing.  Rain was pouring down.  There was even a bit of hail pounding against the windshield as we pulled onto the highway.

With weather like that, it was a good idea to stick to somewhere local and well known.  Tzora Forest near Beit Shemesh was a nice option because of slightly warmer temperatures in the area.  And if the situation didn’t improve by the time we reached our destination, we could simply turn around and take a short drive back home.

But that’s not what happened.

Instead, we had breakfast in an olive grove underneath Tzora Lookout and then took a long walk through a beautiful forest.  Since the path at Tzora is paved, we didn’t have to worry about navigating around puddles or getting stuck in the mud.

This forest is one we’re going to keep on coming back to.  Here’s how we hiked this new, 7 kilometer loop trail through Tzora Forest:

A Lookout and an Olive Grove

We began the trail at the Tzora Forest Lookout.  As expected, the weather began to clear up just as we pulled into the parking lot.  It was still drizzling, but the wind and hail were gone.

Rather than set out on the trail right away like we normally do, we decided to take advantage of the better weather and eat breakfast at the lookout.  So, after checking out the views from the top of the platform, we pulled out a rain cover from the back of our car and set up under a cluster of olive trees.

As we sat there, warming up with boiling hot coffee, the sky began to change.  Grey clouds were replaced with puffy white ones.  And sun started to shine, illuminating the rust colored leaves of nearby trees.  The scene was perfect, even better in the aftermath of a long and intense storm.

Time to Move Out

We relished our time in that grove of olive trees. It felt like we could sit there all day long.

But it was getting late, our coffee was finished, and if we were going to hike, we had to get going.  So, we packed up, threw our bags back in the car, and set off into the forest.

We turned into a shady and beautiful thicket of trees.  A straight path made its way into the woods and out towards the North side of Tzora Forest.  And just as we reached the thickest part of the woods, the sky turned gray.

A giant clap of thunder resounded through the trees. We looked at each other in surprise. And then, the heavens opened, and the rain poured down again.

Luckily for us, we were outfitted in rain gear and pretty much undisturbed by water falling from the sky.  As long as we steered clear of lightning, all it meant was an eye -catching array of reflective puddles on the asphalt up ahead.

Last time we visited Tzora Forest, we had walked along Derech HaPsalim (the Statues Path).  But we had only covered half of the long trail. Now, we walked on the other side of Derech HaPsalim.

The first artwork stood on a bed of brick red pine needles.  The next, above a view out to the valley.

We didn’t exactly pause to study the statues, but they did draw us towards beautiful views of young trees down below and mountains in the distance.

Just Another Walk Through the Woods

We followed the trail as the weather changed back and forth, raining one moment, sunny the next.  At one point, the path wove its way down close to the highway, nearing what is said to be the burial site of Dan, son of Yaakov.

Rather than explore the gravesite, we stuck to the path, passing by a “Relaxation Glen”, more beautiful views, and even running into a fox that scurried across the trail.

After a lot of walking out in the open, we returned to the forest. Gnarly olive trees hugged the path on one side.  And row after row of tall pine trees stretched out up ahead.

A Place to Escape

After a good, long walk on that cold and drizzly day, we found ourselves turning towards Shimshon’s Grave (a site we covered on the last hike through Tzora).  At the crossroads, we followed the green trail back towards the Tzora Lookout where we had started.

We hiked on a wide path in between cactuses, then climbed over a fallen tree.  The last five minutes of the trail crossed through a quiet picnic area, surrounded by thick greenery.

Even in bad weather, Tzora Forest was a hit yet again.  And we had it all to ourselves (just us and the fox).

This sprawling woodland is full of quiet paved pathways amidst layers of thick greenery.  Tzora Forest is just the place to go escape from the daily grind and lose yourself in the wonders of nature (no matter the weather!)

Here’s what you need to know before taking this hike through Tzora Forest:

Questions? Have you walked through Tzora Forest? I’d love to hear about your experience in the comments!

Yishi Forest – A Walk in the Woods

3 thoughts on “Tzora Forest 7K – The North Side”