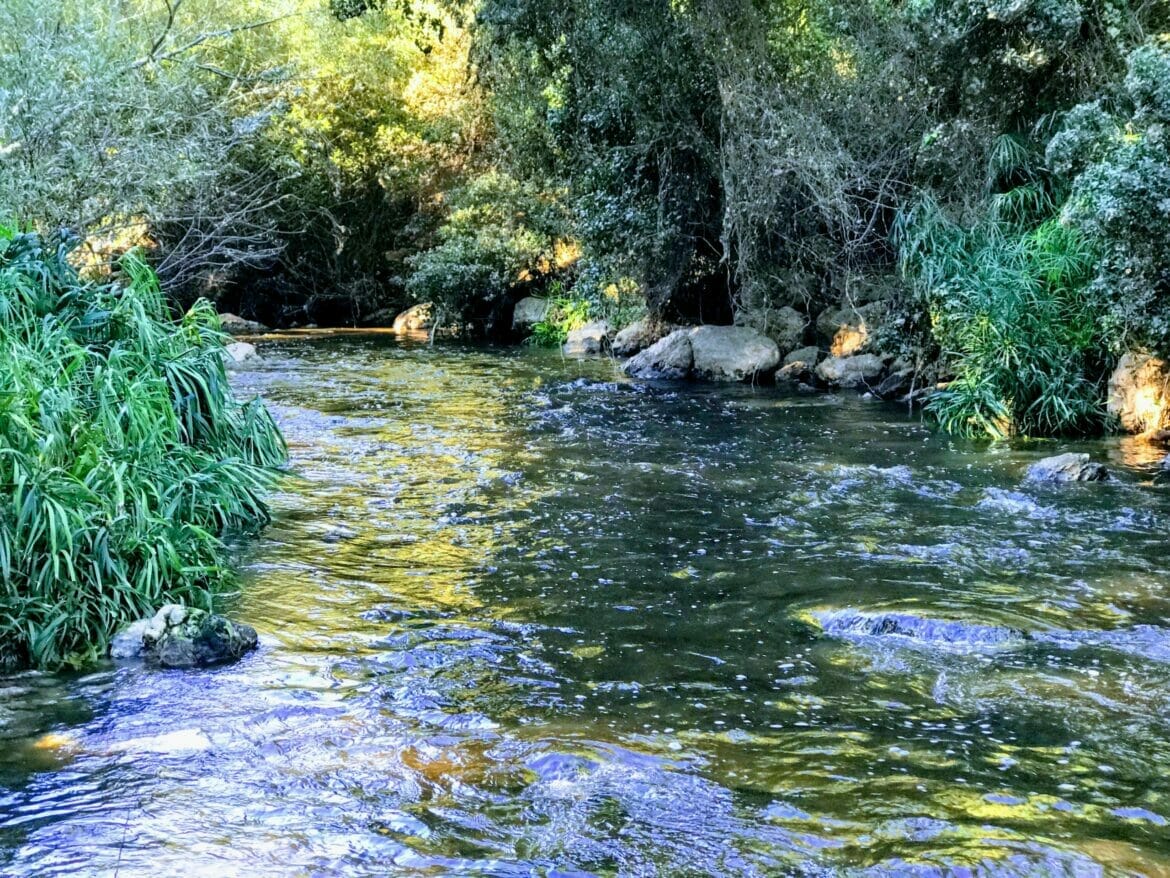 I grew up watching a lot of horror movies.  In New Orleans, every Saturday night we watched a new thriller on Morgus Presents, a weekly television show.  From Children of the Corn to Attack of the Killer Tomatoes, I ran through all of the classics.

On this Friday’s hike, I felt all of those Saturday nights coming back to me.

Let me back up a bit.  For a while now, my husband has been wanting to go and explore Nahal Sorek – the actual river which runs through the Sorek Nature Reserve.  The riverbed lies at the foot of a number of trails which leave from Bar BaHar in the Nes Harim area.  We kind of knew that there was some sort of flowing stream down at the bottom, but we weren’t quite sure how to get to it.

This week, we figured it out.  It turns out that the best and closest place to get to the river is right off of the highway from Nes Harim to Jerusalem.  We’ve passed by the turn off many times on our way to hiking in Sataf.

So we were thrilled when we got out of the car where we thought a trail along Sorek river might be and found a neat little parking lot with a clearly marked trailhead.

We started walking down the path.  Within minutes we saw a beautiful gushing river right on the side of the trail. There was a foggy mist rising from the water and even a few ducks which flew off as we approached.

And we felt very safe and sound and right at home in the great outdoors.

Especially when we saw a sign that said we were at the foot of Sataf Nature Reserve.  Which is beautiful.  So this trail must be another undiscovered gem in Israel, right?

Watch Out for Spiders

The mist continued to float up around us, almost like in a fairytale. There was a musty smell in the air. And as we walked along, we were a bit confused.  Was this a magical paradise undiscovered by all of the locals?  The river was so raging. The fog was so beautiful.  And on the path, there was a field of….spiderwebs?!

Yes that’s right, there were fields of spiderwebs.  Spiderwebs stretched over reeds and weeds and at the end of every tree.  The webs were stunning in the morning sunlight and the gathering mist.  But a gnawing feeling inside of me grew.  Was I in an enchanted wonderland… or the sequel to Arachnaphobia?  Spiderwebs are pretty covered in dewdrops in a spring garden amongst daisies and irises.  But in this quantity, while beautiful, they were creepy!

We continued our walk for miles, listening to the sound of the river, taking in the beauty on the path, and also completely mystified.  The musty smell grew stronger in some places and weaker in others.

We passed an old train station which we set out to explore.  We watched the slow train pass by.  We sat on a bridge and drank our morning coffee.

We just didn’t know what to make of it all.  Signs in the reserve said that the river was made up of water running down from the mountains, purified wastewater, and rain water.  But it smelled so… strange.  And it was so empty and unkempt.

The Inside Scoop from the National Parks CEO

So we finished up our six kilometer hike and hurried home to ask Shaul Goldstein, the CEO of the National Parks Authority, for the lowdown on Nahal Sorek.

Turns out that Nahal Sorek River is not an undiscovered gem in Israel.  The raging river is made up almost completely of purified waste water flowing downstream from Jerusalem toward the Mediterranean Sea. The reason it smells funny is because it takes a while for the smell to abate, even after it’s purified.

We asked him why the river seems less sordid down by Palmahim beach, where we’ve seen it flow into the Mediterranean.  The answer is that the process of purification involves microbes which are released into the water near the Purification Plant in Jerusalem. It takes a while for those microbes to do their job.  The water in Sorek River near Palmahim is, in fact, much much cleaner than the Sorek river near Jerusalem.  Although it’s still not suitable for bathing and drinking.

We asked Goldstein why Israel would channel the waste water through a river rather than having it run through underground piping.  He answered that the powers that be had attempted to make the switch to underground piping, but they were stopped by groups who said that the river of waste water actually does incredible things for the local environment.

The Strange Dichotomoy of Sorek River

Which does make some sense.  As I said, the whole walk was disturbingly beautiful.  There was birdsong everywhere.  Tons of greenery of every kind. And evidence of a lot of other animal life (besides spiders).

As for the spiders?  We found one source that indicated that the boom in the spider population was in response to a boom in the mosquito population in the area.  (Apparently, mosquitos are attracted to purified wastewater.)

We didn’t see any mosquitos (or any actual spiders), but we did get a funny feeling as we looked out at the whitewater and tall green reeds down by the river bank.  Looking up, we saw nests of spiderwebs at the end of every single tree branch. I started to worry that Aragog was lurking in the shadows. And we hustled out of there.

So this week, I don’t have a kid friendly hike or a stroller friendly hike or anything of the sort to share with the world.  But I did get an interesting lesson in local waste disposal and the environmental impact that all of that water can have on what would otherwise be a dry riverbed.

So if you want to check out a cool and weird local phenomenon, you can take a walk down by the Sorek River.  But if you’re looking for that one with nature feeling that only a great hike can bring, this isn’t it.  Sorry about that!

3 thoughts on “The Secret of Nahal Sorek”