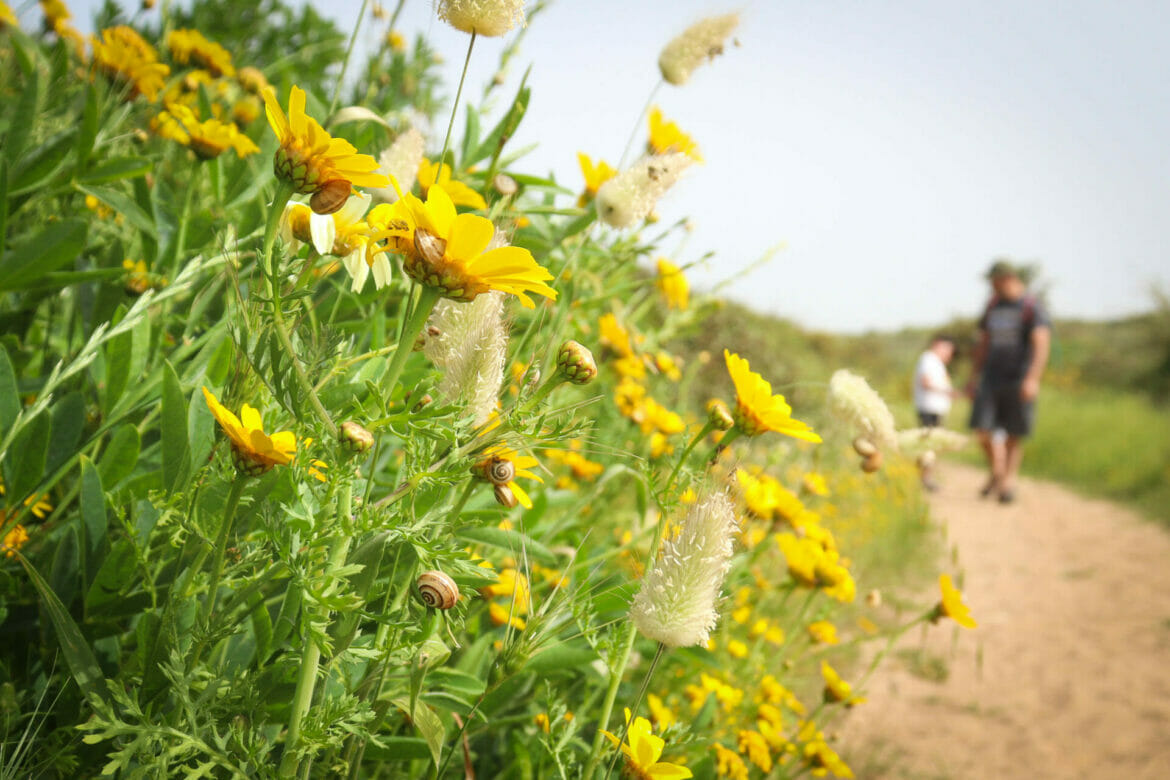 Israel: it’s a tiny country with a rich and varied terrain.

From vast deserts to mountain peaks, grassy meadows to forest land, Israel has it all.  Much of Israel’s western border sits along the Mediterranean Sea.  This means that the country is also home to beautiful beaches and coastal terrain.

What do hiking trails look like along the coast?  Often, they ramble along a stream, one that flows into the sea.  The terrain here tends to be much flatter than in other parts of the country and filled with wildflowers that thrive in sandy soil.  Birds are attracted to these coastal trails.  And usually, after following the trail up a sand dune or two, you’ll wind up at a quiet beach.

A few weeks ago, we had the opportunity to try out a new, beautiful coastal trail at the Poleg Stream (Nahal Poleg) in Central Israel.  I find that these river to beach hikes are always crowd pleasers, so I was happy to explore Nahal Poleg while we were on a vacation with the kids.

The trail wasn’t quiet (the hike began right on the outskirts of Netanya, near the Wingate Institute), but it was full of wildflowers and other varied beauty. And of course, there was a trip to the beach about halfway through.

My family really enjoyed this circular hike over beach-y terrain.  Here’s how we hiked from Poleg Stream to Poleg Beach:

Country Mice in the City

We started the hike in a dust parking lot near the Wingate Institute.  It took us a few minutes of searching to scope out the trailhead.  But soon we were on a way, down a highway towards a massive bridge that would deposit us on the other side.

My kids were quite overwhelmed by all of the hustle and bustle: cars driving by at highway speeds, honking, zipping along.  In our hometown, we don’t get much exposure to city life.  The kids seemed quite relieved when we had finally passed over the big bridge and moved away from the noisy highway.

There was a lot of construction going on too.  Due to all the ruckus, it was hard to find the continuation of the trail through a little gap in the fencing.  But we found it.  And we soon escaped into the relative peace and quiet of nature.

First, we walked through a shady grove of trees.  Then, we proceeded along the Israel Trail past typical springtime coastal terrain.  Masses of yellow flowers blossomed alongside the slightly sandy path.

We were walking along Poleg Stream, but we couldn’t see much of it – it was hidden by vegetation.  After a while, we reached an underpass which took us back to the other side of the highway. In that spot, we could see the little stream in the darkness, free from the green growth that concealed it along other parts of the trail.

As we walked, we began to detect a slow transition.  The path turned sandier.  The thick wildflowers began to thin out.  And eventually, we saw sand dunes up ahead.  We were almost there – at Poleg Beach, where the Poleg Stream flowed into the sea.

With newfound energy, the boys ran up ahead, eager for a cooling dunk in the Mediterranean Sea.

It’s hard to imagine a more rewarding feature on a hike than a mid-trail beach stop.

The kids immediately transitioned into beach mode: digging in the sand, playing in the waves.  They were very happy to be there, and hardly noticed the crowds of teenagers that were absolutely everywhere.

My favorite part of this beach stop was the spot where the stream spilled into the sea.  In this area, still water contrasted with the movement of waves just beyond.  It was fun to wade through it and watch as the sea lapped towards the stream.

At the mouth of the Nahal Poleg, we spotted little fish swimming fast, making their way further into freshwater.  We wondered what kind of fish they were and why they were working so hard to swim into the stream.  Eventually, we lost sight of them, and returned to playing in the sand.

Back over the Dunes and Coastal Views

All good things must come to an end.  After playing at the beach for a while, it was time to be on our way.  We walked along the shore towards the next part of the trail.

The trail soon veered off into sand dunes.  It wasn’t so easy to follow trail markers in this spot (this is not unusual for beach trails).  But soon, we were heading up the dunes towards a trail above the sea.  We turned back for one last glimpse of the water before heading deeper into the dunes.

As we trudged along the sandy path, we passed clusters of poppies along with yellow and purple wildflowers.  Soon, the next big attraction came into view: a big slope of sand dune to run or slide down.

We all ran down the dune as fast as we could, coming to a stop in a soft patch of sand at the bottom of the hill.

The city came into view again.  The path turned from sand to dust.  Soon, we approached the final stretch of the trail and the gate around the parking lot.  Our hike at Nahal Poleg was coming to an end.

This trail had been an awesome discovery.  The whole family had enjoyed the terrain, especially the mid-hike trip to the beach. This hike at from Poleg Stream to Poleg Beach was a great escape from the city into a world of natural beauty in Central Israel.

Here’s what you need to know to hike this circular trail at Poleg Stream:

Questions? Have you hiked this trail at Poleg Stream? Let’s hear about it in the comments!