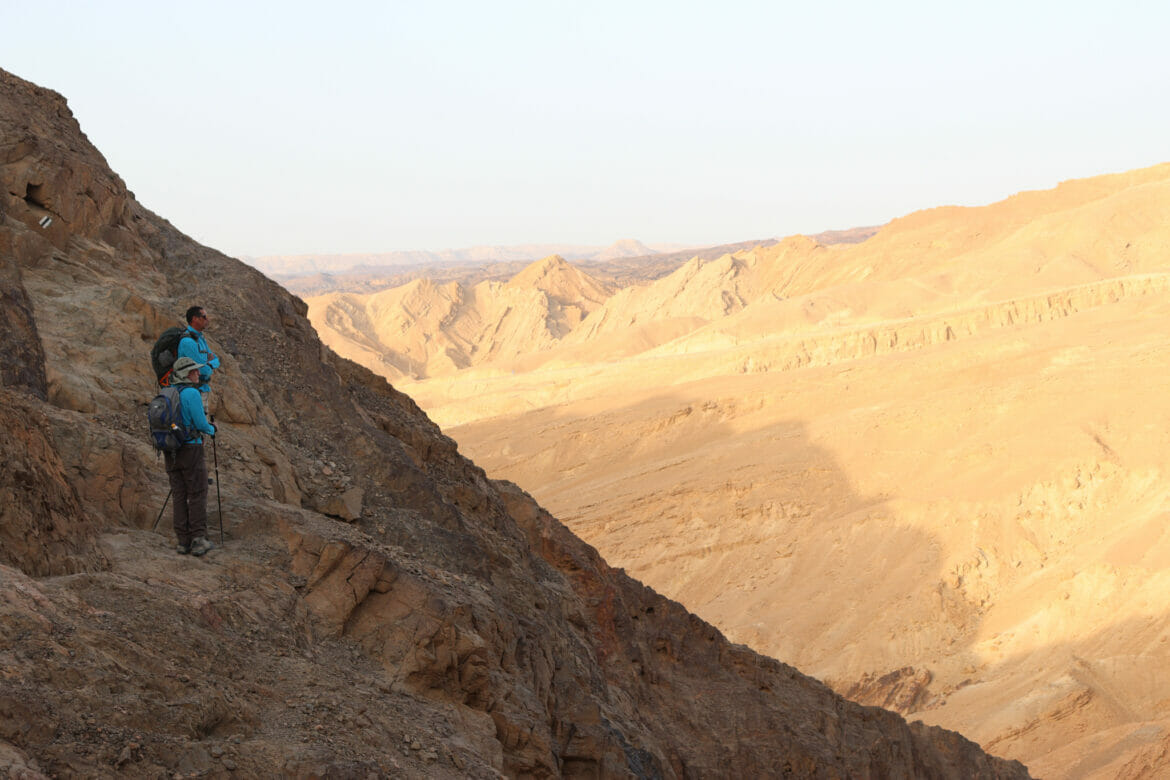 Har Shlomo.  It’s one of the most well-known mountains near Eilat.  This peak, named after King Solomon (all of mountains in this range are named after Biblical kings), towers above others nearby.

But what makes Mount Shlomo unique isn’t just its height.  The mountain is also made out of magmatic rock, thought to be about 500 million years old. Because of this, the terrain of Har Shlomo is a rich deep reddish brown color in contrast to its sand-colored surroundings.

There are several different hiking trails that go up, down, and around Mount Shlomo.  This climb can be a circular hike or begin at one campground and end at another.  Whichever way you climb it, the ascent is steep and rocky.  And no matter how you get there, the view from the top is out of this world.

Several weeks ago, I climbed Mount Shlomo with Heels of Love, a three-day desert trek fundraiser for Alyn Children’s Hospital.  This wasn’t my first time on the mountain, but it was my first time taking this particular route.  We climbed up from Yehoram Campground, ascending Mount Yehoram and then Mount Shlomo.  After reaching the summit, we climbed down the other side and finished off the day in nearby Nahal Netifim.

The trail was awesome – and I wasn’t surprised.  Every time I climb Mount Shlomo, it’s an entirely new adventure into the breathtaking beauty of the Southern Negev.

Here’s how we hiked it this time around:

Waking Up with the Birds

Soooo…..last year when we climbed Mount Shlomo on Heels of Love it was raining.  This made for a frightening and fun ascent up wet terrain under a cloud filled sky.  We wore jackets!

This year, on the other hand, we climbed Mount Shlomo right in the middle of a heat wave.  Although it was early March (still prime season for hiking around Eilat), temperatures were set to rise into the 90’s that day.  So, we decided to begin our climb at 5:00 AM.

I was thrilled for the chance to photograph the terrain during the golden hours of the morning.  We pulled into the Yehoram Campground in the wee hours and gathered around to begin our trek.  I started taking pictures.

We began by climbing Mount Yehoram.  This part of our ascent was steady and gradual.  We climbed up sand-colored terrain, reaching higher ground just as the sun began to peek over the mountains in the distance.

After walking for a while in the relative silence of early morning, we reached our first stopping point, a memorial site built to commemorate two fallen soldiers.  That morning, we were accompanied by one of the soldiers’ close friends from years past.  He told us the story of their deaths (they died from heat stroke during training drills nearby) and how he and his friends actually built this memorial with their own hands in their memory.

After this moving talk, we continued on over the last big hill of Mount Yehoram, towards another lookout to the mountains in the distance.  On one side, the mountains were golden.  On the other, they were red and black.  According to the plaque (put in place along with the memorial) this was the dividing line between Har Shlomo and Har Yehoram, where two different layers of history had been shaken into place by plate tectonic shifts.

Then, we began the climb up Har Shlomo.  The scenery was dramatic – jagged ripples of dark colored rock made the terrain look otherworldly.  The unique beauty of the stone at Mount Shlomo was even more pronounced amidst the rolling hills of tawny rock that spread out in the distance.

We climbed, slowly and easily until we reached a four-way crossroads.  Then we got ready to head straight up, following the blue trail up a steep ascent to the summit of the mountain.

As we climbed, I remembered the challenge of hiking up this peak last year, while wind and rain beat at my face.  This time around, it was a simple steep ascent.  The metal bars along the way allowed us to use our arms as well as our legs, pulling ourselves up to the summit of the mountain.

And who was there waiting for us at the top in the soft glow of early morning?  A pair of pretty ibexes on a sunrise walk.  As our group approached, they hopped down the side of the cliff to reclaim their solitude.  We had the summit of Mount Shlomo all to ourselves.

Everyone was ready to sit down and relax after a challenging climb.  Our guide, Assaf, made coffee.  Some of the men in our group donned tallit and tefillin.  We relaxed at the summit in the cool breeze of early morning, sipping coffee, praying to God, and taking in the incredible views all around.

After a nice long break, it was time to head back down.  The hardest part of our hike was still ahead: the descent.

For some reason, everyone always imagines that climbing up a mountain is much harder than climbing down.  But this isn’t the case.  As we descended down the blue trail, crumbling rock and tricky pathways made hiking down Mount Shlomo much harder than hiking up.

We tread carefully, holding on tight as we descended, careful not to lose our footing on the layers of rich, dark rock.  After climbing down the steepest part of the incline, we reached a crossroads again.  On previous hikes at the mountain, I had followed along the green trail.  But this time around we made a right onto the blue trail which would take us all the way down the other side of Har Shlomo.

Blue Trail to the End

This trail down the mountain was lots of fun.  There were hand hold ladders in some places, bare rock in others.  We made our way down slowly, sometimes in the sun and sometimes in the shade.  This part of the hike took up the bulk of our morning.  The total descent was actually much greater than the total ascent, even with our climb up Har Shlomo.

It may not have been as exhilarating as climbing to the top, but the technical work of climbing down Mount Shlomo was its own challenge.

After a long while, we reached the end of the line at our pickup point in Nahal Netifim.  Jeeps were waiting for us.  We hopped in, tired and sweaty at the end of our long, early morning journey, and took off.  Through the window, I could see the Nahal Netifim campground as we passed by at top speed.

We weren’t going to be stopping at that campground for the night. Instead, we were off to a refreshing dip in the Red Sea at Eilat: a perfect end to a perfect morning on one of Eilat’s most beautiful and impressive mountains.

Here’s what you need to know to hike this one way trail over Mount Shlomo:

Questions? Have you hiked Har Shlomo? Let’s hear about it in the comments!

Mount Zin and the Potato Field