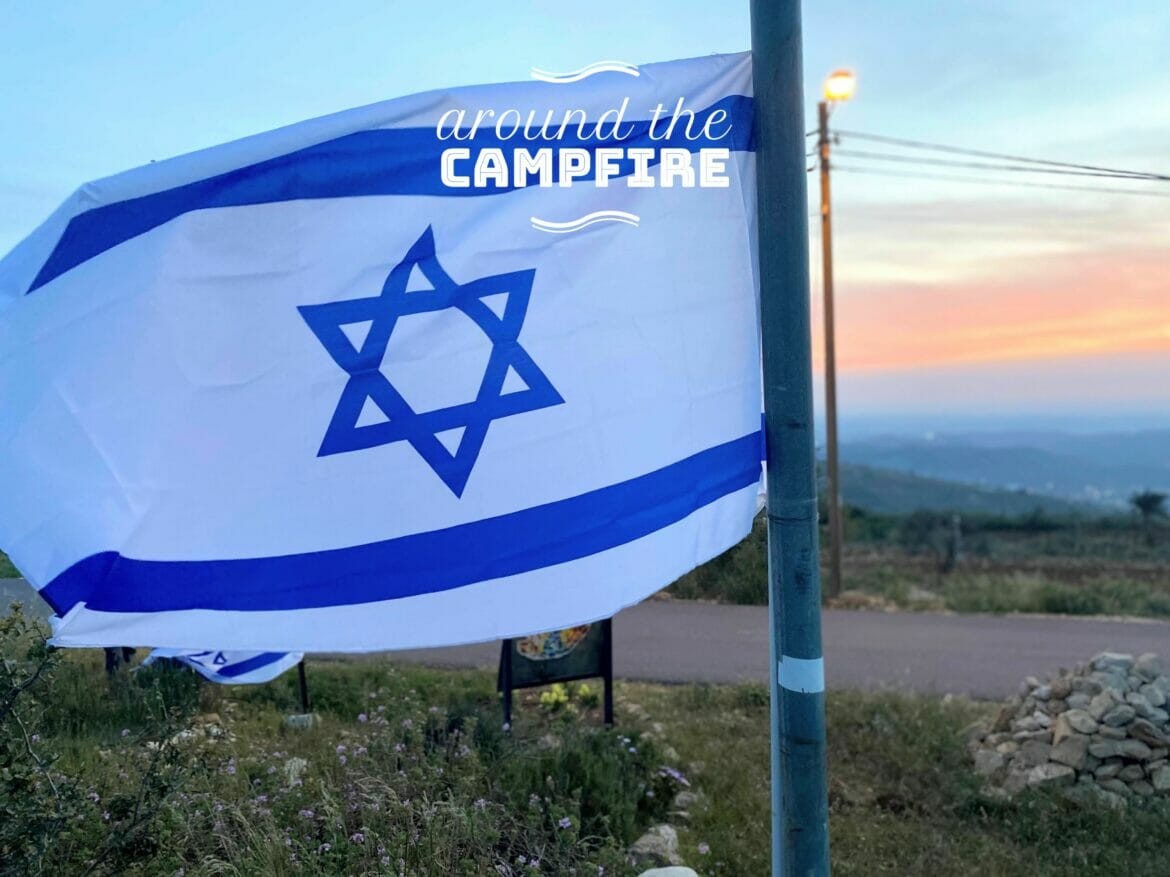 Last Wednesday night I watched the fireworks.  They burst into the night sky right after the 7th grade flag dance, which my youngest daughter was a part of.  During the performance, she ran across the basketball court, her flag held high in the sky.  The group’s coordinated movements created an explosion of blue and white in motion.

When the fireworks started, the crowd was silent except for oooh’s and aaah’s.  The usually dark sky filled with color: green, red, blue, and white sparks in a series of ever more complicated patterns.   Music played over the loudspeaker, Chai, chai, chai, Am Yisrael Chai!

Like a spring from long ago, and on to eternity,

I ask and I pray,

It’s good that hope was not yet lost.

This is the song that grandfather,

And today I sing…

The people of Israel live.

My body swayed to the music as I watched and felt the explosions of color.  I held my little son’s hand in mine.  He danced too.  The words penetrated my soul, and my eyes filled with tears.

The Jewish people are here.  We are alive and singing.

As I looked out on the small crowd assembled on the grassy hill and stone bleachers, all I could feel was a potent awareness that our downtrodden nation had finally returned to our own Land.

Our Land.  Made up of communities of people, young and old.  Made up of grassy hills and stone bleachers and big cities and beach towns and desert shacks.  Made up of mountains and valleys and forests and rivers, all named in our own language.  And lighting up with fireworks on our national Independence Day.

I don’t know why I need fireworks to internalize this fact with such raw force.  But each year on this holiday, I find myself listening to Israeli songs blasting over the loudspeaker, standing in a crowd of teens, small children, and adults, and being inspired to tears.

Perhaps it’s the simple honesty of the gathering…or maybe it’s that fireworks remind me of the 4th of July and grand American pride.  Who would have ever believed that our small, wandering nation would be blessed with the security of our own country, our own people, and our own government, in our very own Land?  After last week’s Holocaust Memorial Day, the blossoming of our nation feels incredible.

The people of Israel live.

Sojourning in the Desert

Why Pray for Rain