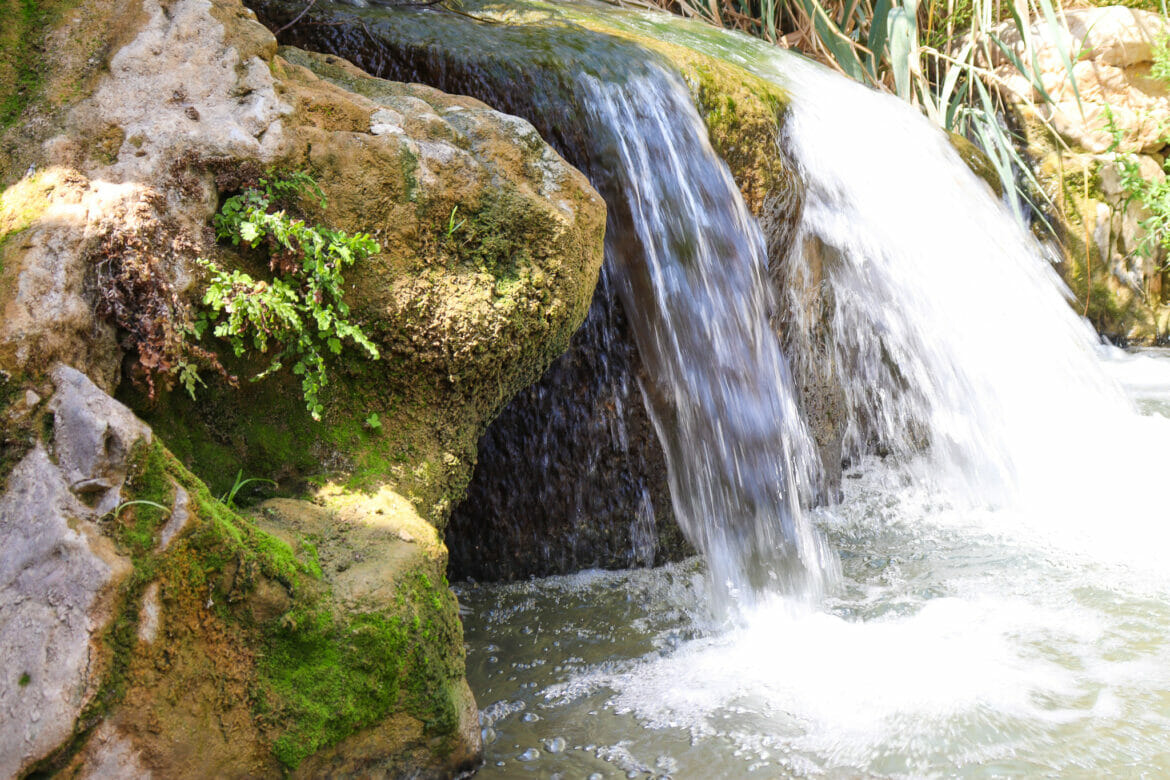 Hikers in Israel often pass through places of historical significance in their travels.  In one forest, there’s the gravesite of a Biblical warrior. In another, you can climb a hill that covers an ancient Biblical city.

Nahal Prat is a lush, natural oasis in the Judean Desert.  At Nahal Prat (or Wadi Kelt as it is otherwise known) 3 springs (Prat, Maboa, and Kelt) rush into a flowing river, to create a natural paradise amidst a barren desert landscape.

Explore just a bit around Nahal Prat, and it becomes apparent that this is a place that holds many stories.  There are old cisterns to discover, ancient irrigation channels, and even a monastery.  But does anyone know the real truth about the history of Nahal Prat?

Take a deeper look at the Bible, and the full story of this mysterious landscape starts to become clear.  It’s an area of hidden caves, of desert beauty.  Because of the fresh water that runs through, it’s also an area where people lived throughout the ages.  It’s a place that one famous prophet called home.

Making connections between Biblical events and the settings where they occurred allows us to better understand the chronicles of history.

With that in mind, let’s uncover the mysteries inside the real, true story of Nahal Prat:

What’s in a Name?

Names tell us a lot about the history of a place.  Although Israel is a country that has changed hands repeatedly throughout the years, many town names have stayed mostly the same, with only small adjustments (from Ancient Hebrew, to Arabic pronunciation).

So, what does Nahal Prat mean?  There are two possible ways to explain the name.  The first is by connecting Prat to the Hebrew word Poriya (fruitful).  It makes sense that the river would be thus called, as it covered an area of rare fruitfulness amidst an otherwise sparse desert landscape.

But the second possibility is also quite compelling.  Some historians suggest that Prat comes from Derech Ephrata, or “on the way to the city of Ephrat” (trust me, the two words look quite similar when written in Hebrew letters!)

Why is this significant? It’s because the term “Derech Ephrata” is actually mentioned in the Bible.  Derech Ephrata is where the matriarch, Rachel, passed away. Many historians say that Rachel was actually buried at a location near Nahal Prat, as opposed to the well-known Bethlehem tomb site.  Derech Ephrata is also an important road that ran along “Patriarch’s Way”, a much-traveled route that Jews used to reach Jerusalem from around the country.

Prat Throughout the Ages

Throughout history, we see explicit mentions of Nahal Prat.  In the book of the Maccabees, we learn that after their 4th successful battle (when the Maccabees reclaimed the Temple Mount), the Seleucids returned, killing off many of the victors.  Simeon the Maccabee ran with the remaining Judean army to hide in Nahal Prat.

With our modern-day knowledge of the Land of Israel, these stories come to life.  Nahal Prat is an area that’s full of caves, with plenty of water.  It would make the perfect hiding spot for a Judean army.

Prat later became the site of winter palaces of Hasmonean kings and Herod the Great, closer to the plains of Jericho. (Ehud Netzer, a renowned Israeli architect, identified a synagogue in one of the palaces.)

In the 4th century, a Turkish monk named Haritoun came to the Land of Israel during the early days of Christianity.  This monk made his home in the caves of Nahal Prat: this desert river is the perfect place for quiet reflection and spirituality.  To this day, a lone monk lives in the Paran monastery overlooking the water.

A Town with a River in Its Backyard

We can also learn a lot about what exactly happened at Nahal Prat by taking note of Biblical mentions of nearby cities. To get to Ein Prat National Park, visitors drive through the modern-day community of Almon-Anatot.

Almon is a small Jewish settlement.  But right across the road lies the Arab village called Anata.  Modern day historians say that this village is one and the same as the Biblical city called Anatot.

We can read about Anatot and Almon in the Bible.  In Biblical times, the Land of Israel was divided into 11 distinct portions of land for 11 of the tribes.  The twelfth tribe, Levi – whose members were the priests and spiritual guides of the people, were allotted individual cities within each of the other districts.  In Joshua (21:18), the cities of Anatot and Almon were given to the priests living in the area of Benjamin.

Even Prophets Need a Hometown

Which priests lived in Anatot and Almon?  Well, it’s only a donkey’s ride away from the Holy Temple in Jerusalem.  But still, the most distinguished priests were kept right around the Temple itself.  So, these two cities went to the less distinguished of the priests who served in the Holy Temple.

In the Bible, we can read about Evyatar HaCohen, a priest from the fallen house of Eli, who was cast out of Jerusalem by King Solomon to live in Anatot after supporting the rebellion of Adoniyahu. (Kings I, ch. 2)

There are also the grandchildren of Eli, the high priest who gave Hannah a famous blessing.  Eli’s children died as punishment for their many sins, so his grandchildren lived amongst the less distinguished priests in Anatot.

And perhaps most importantly, the prophet Yirmiyahu (Jeremiah in English) lived there too.  This prophet and priest gave his prophecies to the Jewish people during times of great national sin, when exile from Israel was inevitable.  The first sentence of the book of Yirmiyahu mentions that he lived in Anatot.

Why Does this Matter?

Understanding that this spectacular desert oasis was Jeremiah’s stomping ground can help us better understand the context of his prophecies.

In chapter 13, God speaks to Jeremiah, telling him to buy a fine linen belt and go to Prat (!). Throughout more modern generations, there were Jewish commentators who were confused by this.  Without full understanding of the topography of the Land of Israel, some (Maimonides, for example), suggested that the prophecy was metaphorical, and that God was telling Jeremiah to travel in his mind to the Euphrates river (Prat) in Babylon.

Other commentators understood that Nahal Prat was right in Jeremiah’s backyard.  So that’s where he went with his linen belt.

God then told Jeremiah to bury the belt under a rock, then to return later to examine its condition.

When Jeremiah returned to that spot on the river Prat, the belt was disintegrated.  God explained that the belt was like the People of Israel, once worn by God as his splendor and glory, they were now disintegrated in sin.

The Jewish commentators compare Jeremiah to Moses.  In one sense, Moses brought the people into the Land and Jeremiah escorted them out.

Nahal Prat ends at Mabua Spring, right near Jericho, where the Jewish people first entered the Land.  The fact that Jeremiah’s prophecies were given at Nahal Prat was a significant and important message for the Jewish people of the time:  Repent now, or you will have to retrace your steps and lose the Land that you were given.

Take a Walk through History

These days, the Jews have returned to Israel.  The Land is flourishing – from cities, to technology, to National Parks.  Now, you can take a hike at the Ein Prat National Park and walk in the footsteps of Jeremiah the Prophet just as he prophesied that lands in Anatot would be resettled (Yirmiyahu ch. 32)!

The best way to do this is to start on Highway 437, at the turnoff to Almon, for a 3.5 hour downhill hike.  From the trailhead, you’ll follow the green trail to pass by Hirvet Ilemet (otherwise known as ancient Almon (Ilem = Alam = Almon).  Continue along the until you reach the blue trail, which heads down towards the river.  As you walk, you’ll see shepherds tending their flocks and incredible mountain views.  Further down, you’ll pass Haritoun’s monastery, a place that a spiritual giant once called home.

As you reach the area of the river itself, notice the almond trees everywhere.  These trees bring us back to Jeremiah’s first prophecy, when God showed him a rod made from almond wood and asked, “What do you see?” (Jeremiah 1:11)

Although there were no distinguishing features on the stick (flowers, leaves), Jeremiah was able to correctly identify it as an almond branch.  Looking around at the almond trees that fill his backyard, it stands to reason that he’d be very familiar with the wood’s color and grain.

From here, you can proceed into Nahal Prat itself, where water rushes over white stones.  There are big caves along the trail.  Imagine how ancient Jewish warriors once hid in these very caves, using the water and animal life of the Prat River as their sustenance.

Nahal Prat is more than just a beautiful desert oasis.  It’s a hike through the pages of Biblical history.  Here, we meet warriors, defenders of the people, prophets, and holy men.

Learning about the history and topography of Nahal Prat and the surrounding area brings our Holy Books to life. Studying the stories and the Land where they took place can help us better understand the messages contained within.

Shani Taragin received her master’s degrees in Tanakh and Talmud from Bar-Ilan University. She is also a graduate of the Matan Scholar’s Program and of Nishmat’s Keren Ariel Program for certification as a halachic advisor (yoetzet halacha) in issues of family purity law. Shani is the educational director of Matan Eshkolot – Tanakh teachers’ education program, Mizrachi Lapidot teachers in Torah shebeal-peh, and of the Morot l’Halacha program in MaTaN Renana. Shani has taught and continues to teach, lead tours and coordinate programs in numerous seminaries and adult education programs in Israel (e.g. Matan, Midreshet Lindenbaum, MTVA, Sha’alvim for Women, Migdal Oz, Amit Fellows, OU, the Eden Center, Women’s Beit Medrash in Efrat and Ramat Bet-Shemesh) and worldwide.

Want to go for a hike at Nahal Prat? Try one of these three trails:

Or, follow the trail outlined in the article written up in this Hebrew article from the Parks Authority.

4 thoughts on “Nahal Prat Through History: The Real Story”