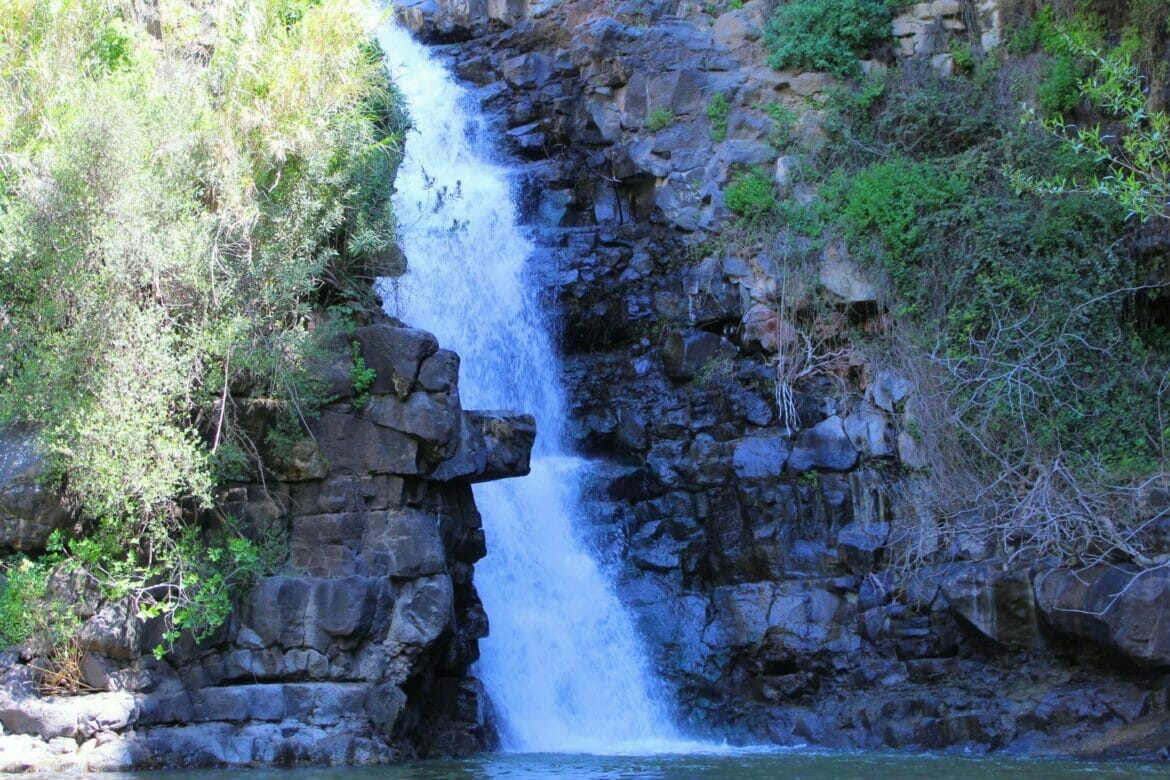 It was the last day of our three-day trip up north with our three youngest kids.  The sun was shining, the weather was perfect, and we were hoping to find a nice waterfall hike for families at the Yehudiya Nature Reserve.

Yehudiya Nature Reserve is in the Golan Heights, north of the Kinneret.  From our online research, we could tell that there were lots of different trails in the park – some leading along streams, some with intense climbing, and others showing off the park’s antiquities.

We had been to Yehudiya before, so we knew that we didn’t have to do too much research in advance.  Since it’s such a large National Park, there is a dedicated information stand and a parks worker giving out detailed maps and information.

When we got there, they helped us pick out a hike that would be good for our kids.  As they described it, we would hike about forty-five minutes downhill towards Yehudiya waterfall, then return the way we came.

Simple, straightforward, but it’s all in the details:

Fields of Flowers in Springtime

As we started off on the red trail, we headed downhill through thick clumpy dried mud.  It had been at least a week since the last heavy rainstorm, so the trail wasn’t at all difficult to navigate.

Almost immediately, we noticed the incredible beauty of the area – flowers blossomed all around us, and our descent led us towards a rich green mountainside canyon.

Soon we reached the remains of the ancient village of Yehudiya. It was occupied until the Six Day War, so many of the structures were quite intact. But there are remains of burial stones there that date back thousands of years.  My kids explored the overgrown ruins before getting back to our journey down to the falls.

The path continued alongside the mountain, the falls visible in the distance at the far end of the canyon.  Since it was springtime, everything was simply beautiful all around.  The entire mountainside was green, with little green puffs of trees lining the cliff.  The sky was a bright shade of blue.  And tall yellow mustard flowers blossomed all over the place.

Somehow, all of that beauty was lost on my kids.  They couldn’t wait to get all the way down to Yehudiya waterfall.

This whole trek down to the bottom took some time.  (Or maybe it only seemed that way to my children who were dressed in swim gear and ready for wet fun.). The kids were getting tired.

So, before the steep descent that would take us down to the bottom, we rested for a few moments in the shade.  We could hear the roar of the falls crashing down below.  Beyond our little tree enclosure, the view was like pastoral Switzerland.

It was time to head down to see what was waiting for us at the bottom of the canyon.

The walk down wasn’t tricky for my kids – climbing over giant rocks is their bread and butter.  (It’s walking for extended periods of time on flat surfaces that makes them whiny!) But it was very steep.

We made our way down slowly, the sound of the water getting louder as we approached the falls.  The trail down was so steep, that I was secretly dreading having to get the kids back up this part of the trail.  But I kept it to myself.  Everyone was so eager to reach the water.

And then we were there.  The giant waterfall cascaded down in the distance, crashing into a large and deep pool.  The whole area around the falls was filled with trees, large stones, and little rivulets. And that morning, we were the only ones there.

We could tell that the main pool would be too cold and rough for our little guys to start off with, so we climbed up and over rocks and streams until we found a spot to hang out.  Half in the sun, half in the shade.  Trees and branches to climb and grab onto.  Little pools, bigger pools, and whitewater falls to play in.

As adventurous as I am, if I had been been there with just my husband, it’s unlikely that I would have spent hours exploring every pool.  I would have jumped in once, then spent the rest of the day with my feet in the water, basking in my surroundings.

But there’s something about kids and water.  Even a small puddle seems to have a magnetic pull on my kids – and a natural paradise like Yehudiya falls all the more so.  My kids could spend hours playing in the effervescent pools and never get tired.

So that’s what we did.  We built tree bridges and crossed them.  We hopped between the rocks. The kids splashed a lot.  And tried out each and every mini water fall.  Then we swam out to the big waterfall (which was freezing of course).

When we had planned out the hikes for the day, we had assumed that we’d have time for two – the Yehudiya trail was only supposed to take a couple of hours to complete.  But as the hours passed by, we saw that this hike was going to be all-day affair.

Finally, we had to tell the kids that it was time to go.  Our food was in the car, it was late in the day, and we needed to get them back up the mountain while we still had the energy to climb.

As it turned out, the ascent wasn’t nearly as tough as we expected it to be!  Both my husband and I got away with giving zero piggy back rides (which was pretty surprising, considering that we had both carried children on the way down).

With the promise of popsicles at the end, my kids hauled their wet selves up to the top of the cliff, then warmed up as we made our way back to the trailhead in the afternoon sun.

Yehudiya Nature Reserve turned out to be a great find for my family.  We weren’t expecting the incredibly picturesque views, tons of wildflowers, and awesome climbing.  And the waterfall itself was one of the most serene and beautiful wet places we’ve explored in all of Israel.

This really was a special place to visit – especially in springtime, but probably spectacular in every season. If you’re in the Golan, this is the place to go.

Just some things to keep in mind: The first part of the hike is in the sun, so that part would be uncomfortable on a hot day. Once you get to the steep downhill, it is more shaded. And of course, there’s the cool waterfall waiting at the bottom…

My kids made it through this hike with only a bit of whining at the beginning. It’s not an easy hike for little kids – only good for kids who are used to being outdoors and like to walk and climb. Same goes for elderly people – this hike is not suitable for people who aren’t steady on their feet.

Once you reach the falls, you can sit by the main pool without too much climbing and rock navigation. But if you are able, its much better to get a little wet and climb all over the place to find a quiet spot of your own. The area is very large. Actually, while we were there several groups of people showed up and we didn’t even see them until we left.

This trail would be fun to hike without kids as well – I’m sure it’s much easier that way! There are other, longer trails in the park. More to come on those later.

When you look at the printable trail map, you’ll see a long section of red trail that looks like a great circular hike (not the way we walked). This trail is CLOSED for now due to rockfalls. So don’t try to go that way.

Don’t forget to read my guide to the navigational features in this post before you go!

Have you hiked this trail? Have any tips for other hikers? Leave them in the comments section below! 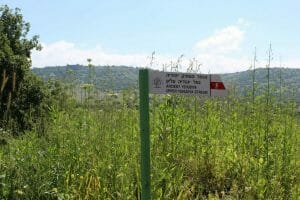 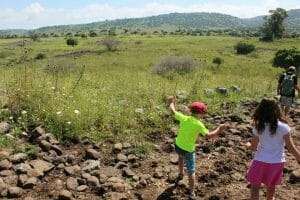 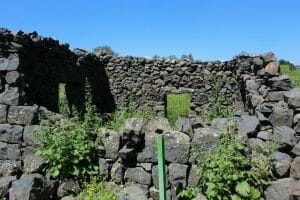 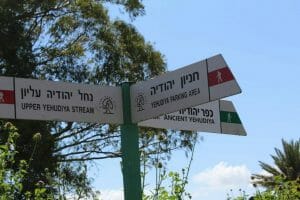