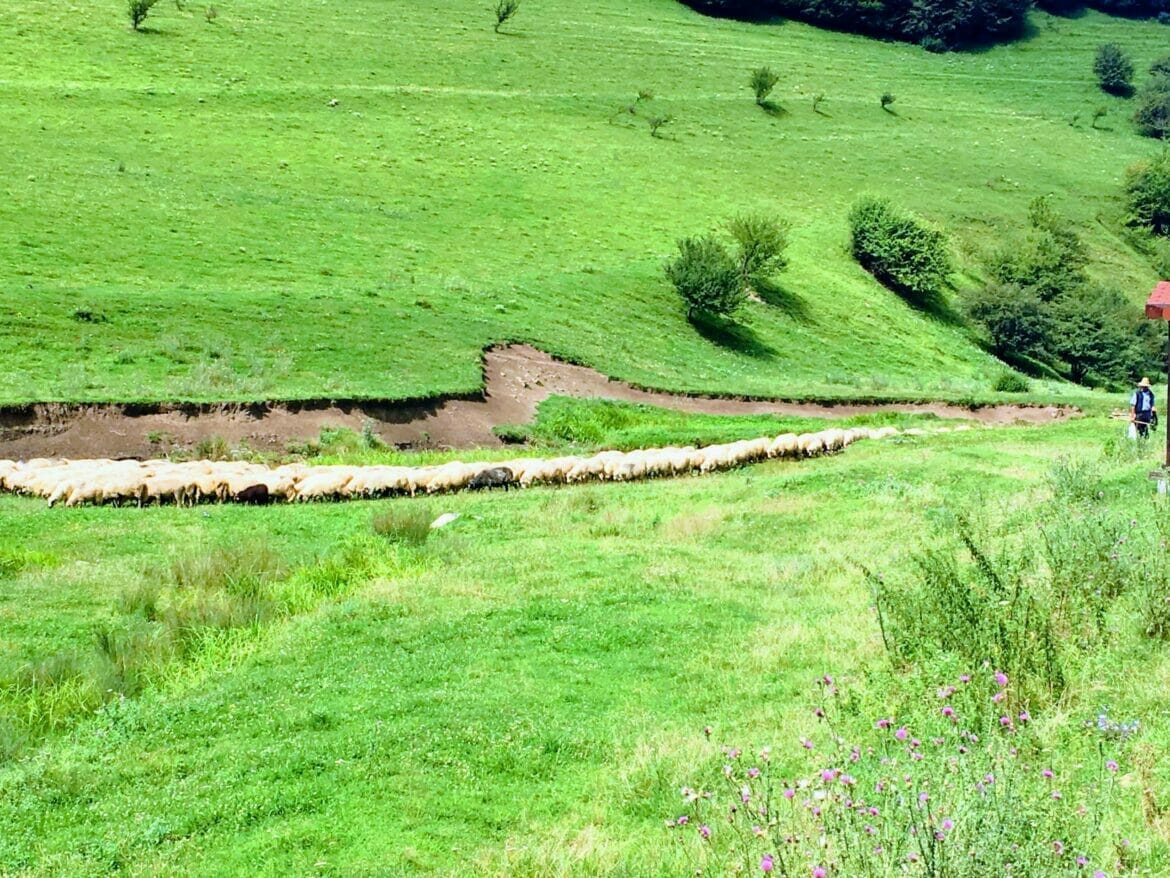 I used to think that to have a good time travelling you needed to pick a super cool destination.

Head to Rome or Paris or the Caribbean and you were guaranteed an amazing trip, as far as I was concerned.  But what I’ve learned throughout my travels over the years is that picking the big name spots is not the only recipe for vacation success.

For example –  my trip this summer to Romania.  Last June, I decided I wanted to bring my daughter on a mother daughter vacation after her high school graduation.  There really weren’t any specific criteria for where we needed to go – it just had to be good quality time spent together having fun.

So this time around, I opened up SkyScanner and began to search for good deals on tickets to all destinations from Israel.  Turns out that the cheapest tickets for our travel dates were to Cluj Napoca –a thus far unknown (to me) city in Romania.  At only about a hundred bucks a ticket, it was a no brainer.  In the middle of July it would cost more just to book a hotel room somewhere nearby.  I booked the flights right away and figured I’d plan out the trip later.

A few weeks after making the reservations, I began to worry.  I had done a bit of research since and had discovered that Cluj Napoca was not one of the larger cities in Romania.  While it was part of Transylvania, it wasn’t close enough to anything Dracula related to visit in our two and a half short days.  And it wasn’t anywhere near Bucharest, the nation’s capital.

Would we find anything to do in Cluj Napoca?  Did I pick a lemon for our much anticipated graduation vacation?

So I popped open my laptop.  And after a few hours on Google, I began to feel a little better.  There was plenty to do to fill up two days or more.  The problem was figuring out which activities, sites, and hikes would be the best. I came up with a long list of possibilities and made plans to discuss it with my daughter and plan an itinerary.  After booking a lake front hotel room on the outskirts of the city (for less than $40 a night!), I shut my lap top and hoped for the best…

So was Cluj Napoca a lemon?  Absolutely not!  There was tons to see and do.  We had an amazing time.  Actually, travelling in Romania was an eye opening experience in many ways.  We hiked, biked, and explored the city and the countryside.  We didn’t stop talking about it for weeks afterwards.   And our helpful guides were happy to share lots of information about the places we visited.  Here’s what we learned on our trip:

Romanian – It’s a People and a Language!

Maybe that sounds obvious, but I had actually never heard of the language, Romanian.  Not that I ever thought about what people spoke in Romania (I know, people can be so self-centered!), but if I had I wouldn’t have known what to think.

Turns out Romanian is one of the six main Romance languages.  It’s a beautiful and familiar sounding language – it kind of sounds like a cross between French and Italian, although Romanians will tell you that there is much Slavic influence as well.  With our brief exposure to the language, we were able to read signs, shop at the grocery store, and generally get around without much trouble.  Which for someone like me (I love languages and wish I could speak them all) made the trip that much more enjoyable.

Romania is the Land of Gypsies

In fact, throughout Europe the name for gypsies is “Roma”, which Romanians don’t really like because they don’t necessarily want the whole world to think that all Romanians are gypsies.  Not that there is anything wrong with gypsies, but they do suffer from kind of a bad reputation.  Actually, being a gypsy is one of the worst social stigmas in Romania.

We had fun gypsy spotting though.   These people live more of a simple and nomadic life.  You can see the men riding their horse drawn carts down the road or women with their colorful scarves sitting in groups.

There are Hungarian Villages in Romania

This didn’t mean anything to me either, at first.  But when visiting one of these villages, it was interesting to learn that over the years and throughout the many wars, some of the borders between the two countries got a bit fudged.  It was cool to see all the signs in both Romanian and Hungarian.

She told us about how the village is self -supporting, each neighbor planting a garden or raising animals and exchanging their goods. And she showed us the detailed artisanship that went into every element of her historic family home (which was about the size of a large bedroom).

You Can Eat the Berries, But Watch out for Bears

Where I live in Israel, berries are kind of a rare treat.  So it was a super fun discovery to walk through forests of edible wild blueberries and raspberries near Belis Lake (after we decided it was a too cold and foggy for a swim).  We were hand to mouth for twenty minutes eating our fill of juicy berries.  Then my daughter decided to go look at some wild horses with our bike guide.  After a few moments they came back to look for me.  “You must be careful,” admonished our guide, “It wouldn’t be the first time that a bear was quietly eating his way around a bush and came face to face with a person quietly eating his way around from the other side.”

So in Romania (or in any wild berry patch for that matter) stuff until you’ve had enough, but keep your eyes peeled for bears.

My daughter insisted that we book a night tour in the locally acclaimed Hoia Baciu haunted forest.  But after we told some locals about our plans, they tried to dissuade us from going.  Each one of them had their own story of a personal haunted happening in the forest.

At nightfall, we met up with our forest guide who gave us a tour as we hiked through, showing us mysterious pictures and telling us tales of all of the inexplicable events that had occurred in the surrounding area.   He showed us twisted trees, magical clearings, and snake shaped growths.  But in the end he explained them all away, and said that despite what the locals believe, the forest wasn’t really haunted.  Most of the stories had roots in the ancient pagan culture that defined the country.  All of the creepy noises could be attributed to the way the wind blew through the trees and the sounds of the wild animals of the forest.

Cluj is Full of History and Rich Culture

From beautiful renaissance style dwellings to churches to communist block apartments, Cluj really did have it all.  Since poverty has been a longtime problem amongst the locals, walking through town and the surrounding villages is like walking through a living history book – turns out, that people without a lot of money don’t renovate.

And with four universities, a gigantic library, and an opera house – Cluj Napoca has more than its fair share of culture.  We didn’t have enough time to enjoy it all, but we did have fun walking through the city and taking pictures – of Italian style piazzas, statues, and funky architecture.

The People are Friendly and Everything is Dirt Cheap

Whenever I travel, I am surprised at just how friendly people can be.  In Romania, people make every effort to be helpful, speak English whenever they can, and are just generally pleasant to be around.  It makes booking a hotel room, renting a car, and navigating the city that much easier.  The people in Romania were really really nice.

And as far as breaking the budget goes, Romania gave us no cause to worry.  Everything was very cheap.  My daughter and I were bewildered after our trip to the local grocery store.  We filled up our cart with milk, fruits and vegetables, coffee, a big package of strawberries, and nuts.  Total cost- five dollars.  Food is cheap, entertainment is cheap, tours are cheap – pretty much everything is cheap.  There was no overspending on this vacation.

You can Find Beauty and an Interesting Story Almost Everywhere

So what did l learn from our trip to Romania?

You don’t need to hit the top twenty most beautiful cities in the world to have a great time travelling. Or even the top one hundred.

Distinct beauty and compelling history can be found almost anywhere. If you make the effort to explore outside of the city, connect with the locals, and go off the beaten path, your travel experience will be much richer.

Travel this way and you’ll discover hidden beauty as you learn about the natural surroundings, lives, and history of another people.

What I Learned While Hiking Through Scotland

On Hiking, Travel, and Love of Country