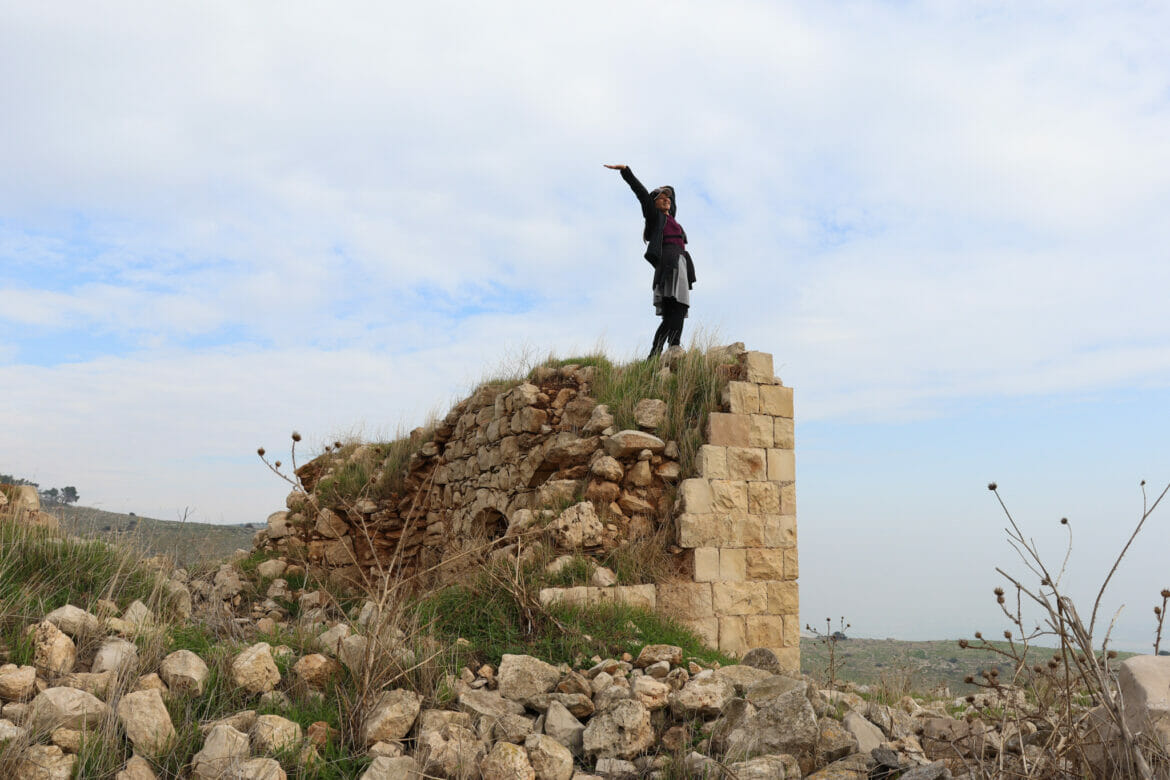 All year we wait for rainy season to arrive.  Now that it’s here, it’s time to explore those nooks and crannies in Israel that come to life after plentiful rainfall.

The Gilboa mountain region is just such a place.  During the summertime, these rolling mountain in the lower Galilee are hot and dry.  With sparse shade and golden grass, Gilboa Mountain trails in summer lack much of the appeal that they have during the winter and spring months.  During the rainy season on the other hand, the Gilboa region is well known for lush greenery and beautiful wildflowers.

This past week, we decided to go on a post-rain hike in the Gilboa Mountain range.  We planned out an 8.5 kilometer circular trail that would take us up to the top of a mountain and then down into a valley.  At the top, we were hoping to get a glimpse of the spectacular views that the Gilboa is known for.

The rest of the trail was going to take us through the green, rolling hills, past several notable ancient structures.  Then, we would be climbing back up near a forest to the trailhead.

As we set out in the early morning, a gentle mist filled the air.  We were praying that the weather would clear up a bit by the time we reached our destination.  After all, part of the appeal of the Gilboa mountain region is the beautiful views!

We didn’t have much luck with the fog, but we did enjoy an amazingly beautiful hike in a rarely visited part of the country (for us).  There were lots of wildflowers, animals, and a few seasonal firsts (almond blossoms and asparagus).

Here’s what we saw on this 8.5 kilometer circular trail in the Gilboa Mountain range:

We parked our car and began walking on a flat 4×4 trail that led us along the side of the mountain. Immediately, we were struck by two things.  The first, was that the Gilboa had definitely begun its winter transformation.  Although clouded by fog, we could see that the views out to the surrounding area were spectacular, green and lush beneath the cloudy sky.

The second was that it was freezing out there!  What we had forgotten from our last trip to the Gilboa was that the place has wind farms.  That means that there’s got to be a lot of wind.  And there was.  We shivered in our light jackets as we picked up the pace, trying to warm up.

Pretty soon we were headed uphill.  And so much the better: now, with our hearts pumping, we began to feel a little less chilly. We followed a narrow trail off of the 4×4 path and into a lightly wooded area.  We were now climbing to the top of something called Pisga 522.

It was here that we noticed the first cyclamen.  They were growing abundantly, in between rock cracks and underneath crevices.  I was happy to see that flower season had officially begun.  We climbed past white crocuses, pink cyclamen, and the occasional yellowish narcissus.

Soon, we reached the top. It was spectacular up there on Summit 522.

On one side, we could see out to a world of rolling green hills, picture perfect under a blanket of fog.  On the other side, flowers blossomed abundantly, their little pink heads sticking up from a carpet of grass and white rock.

We thought about stopping right there for breakfast (it was so pretty), but we opted instead to push on a little further to the next nice-looking picnic spot.

We followed the narrow little path across the mountain, then down at a somewhat treacherous angle.  After heavy winter rains, the path was muddy.  It wasn’t always easy to stay upright as we headed straight downhill over a series of large and small rocks.

As we neared the bottom of the mountain, we noticed another little hill right nearby, with jagged cliffs hanging out over sheer drop.  After admiring it for a minute or two, we saw that the trail led right over it.  So, we headed into the valley, then back up to the hill along the path

Walking along, we could see the cliff edge to our right.  Clusters of hot pink cyclamen popped out of the rock, next to smaller purple flowers.  I had to run down and take a picture.  And when I got there, I discovered that I was in the perfect spot for our morning coffee.

Coffee on a Cliff

My husband followed me down, and we spread out on the rock and poured hot coffee, much appreciated in the cool Gilboa breeze.  It was kind of the perfect spot for a break.  We had a flat rock on a cliff edge, green rolling hills, and flowers for company.  What more could we want out of breakfast?

Then, in the distance, we noticed movement.  A pack of gazelle ran freely between the hills, prancing along at top speed.  We counted them: one, two, three, four, five, six, seven….it was the most we had ever seen together at one time.

Towards the Mukhtar’s House

After coffee, we continued on our way, enjoying the stunning scenery of the Gilboa as we followed a narrow path on the side of a hill.  Soon, we reached an old structure: the Beit HaMukhtar, thought to have once been the home of the Sheikh in charge of the nearby village.  Others have speculated that the building was used as the schoolhouse for children from the local town.

Whatever its original purpose, the Beit HaMukhtar was also used as a meeting point after the War of Independence, for Arab spies from across the border.

We climbed to the top for some pictures and noticed the beautiful views from the top of the building. Whoever lived here or went to school here sure must have enjoyed them. After snapping some photos, we continued along the trail.

The next stop on our Gilboa adventure was a large and remarkably intact village, originally built in the Byzantine period.  The ruins are now known as Hurvat Ner, but the village was once called “Om Sirchan” which translates roughly to “Mother of Wolves.”  This name was said to reference the packs of wolves that used to roam the area.

There were pieces of homes and palm trees.  Growing inside of one particularly complete structure, I found the first asparagus shoot of the season.  We wandered around, exploring stone structures and crumbling walls, and made our way through tall green grasses that had taken over.

After exploring the site, we continued on the red trail up the mountain.

The last stretch of the trail took us along the side of a mountain.  A woodland hung over us on one side, and on the other we could see – you guessed it – beautiful views out to the valley below.

As we walked, a patch of white fluff caught our eye.  The first almond trees were blossoming!  Their branches were filled with last season’s almonds along with a flurry of white and pink petals.

I couldn’t believe that these trees were already blooming, several weeks before Tu B’Shvat (when they usually begin to blossom).  This was the official memo: flower season had arrived.  We took some close ups of the flower filled branches and continued up the hill along the trail and back to the car.

Our journey through the Gilboa Mountain range that day had been truly spectacular.  In this pretty, quiet part of the Galilee, off the beaten track trails through lush seasonal greenery await.

Here’s what you need to know to hike this 11 kilometer loop trail in the Gilboa:

Don’t forget to read my guide to the navigational features in the post before you hit the trail!

Questions? Have you hiked this trail in the Gilboa? Let’s hear about it in the comments!

Sataf – Choose Your Own Adventure Walk