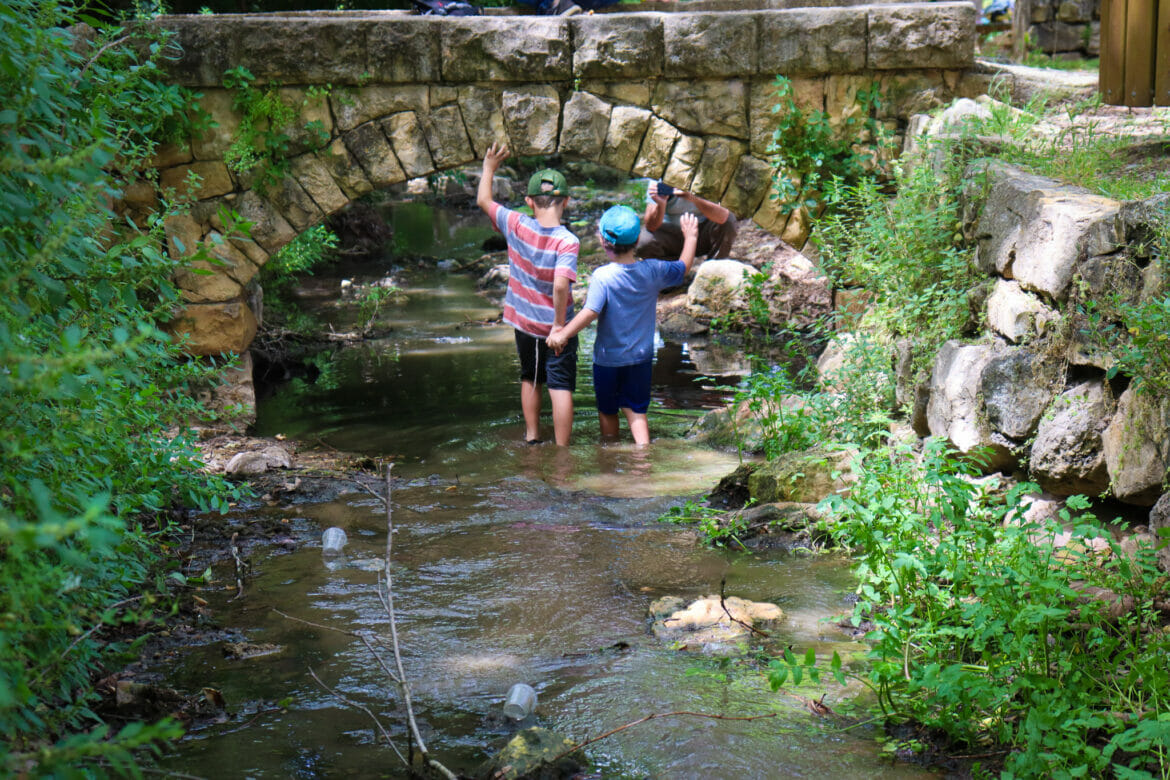 Ein Hemed – I’ve been asked about it several times.  Had I been there? What’s it like?

Embarrassingly, I ‘ve always had to reply that I had been there only once, a long time ago.  And I had no recollection of what it was like.

But despite the fact that Ein Hemed National Park is close to my home near Jerusalem, I didn’t feel a strong pull to go check it out.  For starters, I was fairly certain that whatever walk one could take through the park, it didn’t qualify as a hike.  And although I knew there was some sort of water source there (hence the name, Ein Hemed), I wasn’t sure if one could actually go into the water.

Last problem with Ein Hemed: a National Park right near Jerusalem was bound to be crowded on any day off.  And I like to steer clear of crowds.

But this past Friday, the perfect opportunity arose.  The weather was blistering hot – too hot to go on a local hike of any serious length.  All of the kids were home, so we needed something chilled out anyway.  Water would be a bonus.  And, because of Covid-19 restrictions, the parks were limiting entrance to around 100 people at a time, all of whom had to pre-register.

That meant that it might be our best chance to check out Ein Hemed without having to worry about crowds.

We signed up for our time slot and headed out.  And after all of that procrastinating, Ein Hemed turned out to be a really beautiful place to hang out, take a winding walk, discover history, and play in the water.

Here’s what we discovered on our Friday trip to Ein Hemed:

We pulled into the parking lot, map in hand, and attempted to scope out a trail through the National Park.  According to the map, a wheelchair accessible path circled the park.  We decided to start off on that, then move along onto the wilder side of Ein Hemed a bit further down the trail.

There were several families already in the park.  But not surprisingly, they had situated themselves right at the beginning, near the miniature waterfalls and the stream.

As we followed the path, the beauty of the place struck me. Mature, tall trees created an atmosphere of ancient splendor.  Flowers of every type poured down from the sides of the pathway.

We left the paved trail to follow the terraced walkways towards the far end of the park.  Here, daisies grew in abundance.  Ladybugs decorated their petals, in a scene of whimsical charm.  And pretty much everywhere, hanging branches provided generous protection from the sun.

After exploring to the end of every pathway we could find, we headed back down towards the main area of the park.  A grassy expanse sat next to a softly bubbling river.  Inviting picnic tables peppered the landscape – not so many that it felt like a picnic area in a National Park.

Instead, it felt like your own private picnic spot for breakfast by the water.

We crossed over an arched stone bridge to the other side of the stream and found a place to stop for a while.

Between the table and the rocks by the water, everyone in my family found where they wanted to sit.  We expected that the boys would be dying to go into the water – it was such a hot day.  But our freezing cold iced coffee (and chocolate milk!) and the abundance of shade kept us cool, and content to sit and watch the water bubble by.

Since there wasn’t much distance to cover, we spent a lot longer than usual sitting in that spot.  And finally, tempted by the stream, some of the kids hopped in to feel the water on their toes.

Their report: the water was cool and refreshing, but definitely on the muddier side.  The low level of the stream and plants growing throughout made the water murky at their feet.

And Always Time for a History Lesson

While we sat there, we tried to understand the history of Ein Hemed.  From what we had seen so far, there was an ancient structure on one side of the park, a cemetery on the other.  Even the layout of old trees and the bridges by the stream suggested a cultivated area, designed with a purpose in a time past.

Looking into the history, we discovered that the area was built up in the 11th and 12th century.  The farmhouse, which is located on the way to Jerusalem, served alternately as a waystation for pilgrims and a place to recuperate.

We went up to explore the remains of the building. It was in surprisingly good shape for such an ancient structure.  The cool darkness gave us welcome relief from the heat.  And arched windows and doorways gave testament to the fact that the farmhouse was from another time.

More About the Water

Our morning at Ein Hemed was coming to an end (we had only about two hours to explore the park before the next time slot).  And we still hadn’t fully examined the water situation.

So, we followed the stream to the beginning of the park and walked alongside it. The kids searched for the best place to jump in.  Right at the beginning, little waterfalls sprayed out of a wall onto a flat surface.  A few families with children played in the spray.

While it definitely looked the most enticing of all the water points, it was also the most crowded.  Instead of joining in, we followed the stream further, and found a spot to hop into the water and walk through the stream.

The little boys had a great time.  No amount of mud or plant squish seemed to bother them.  We all followed the stream to the end of the park. Here, the water rose above our knees, and a it was a little too muddy to be enjoyed.

Finally feeling as if we had fully explored Ein Hemed, we cleaned up and headed out of the park, making way for the next set of visitors.

Ein Hemed may not be much of a hike.  But it is a great place to spend a relaxing morning: walking around, getting wet, and basking in the National Park’s natural beauty.

Here’s what you need to know before your trip to Ein Hemed:

Questions? Have you been to Ein Hemed? Let’s hear about it in the comments!

What can I see at Ein Hemed?

This quaint National Park has beautiful trails, a bubbling stream, and an ancient farmhouse to explore.

Where is Ein Hemed?

Ein Hemed is on the outskirts of Jerusalem, near Kiryat Anavim.

How do I find my way around the park?

Free maps in English and Hebrew are available upon entry.

Can I go in the water?

Yes – there are several spots where you can splash in the stream at Ein Hemed.

Is there a fee to get in?

When is it open?

Yes, dogs are allowed in the park.